Why are Republicans suing Mike Pence? Here's what the vice president can — and can't — do on Jan. 6

"There is no secret legal maneuver left to stop a Biden presidency," experts say — but Trumpers keep hoping 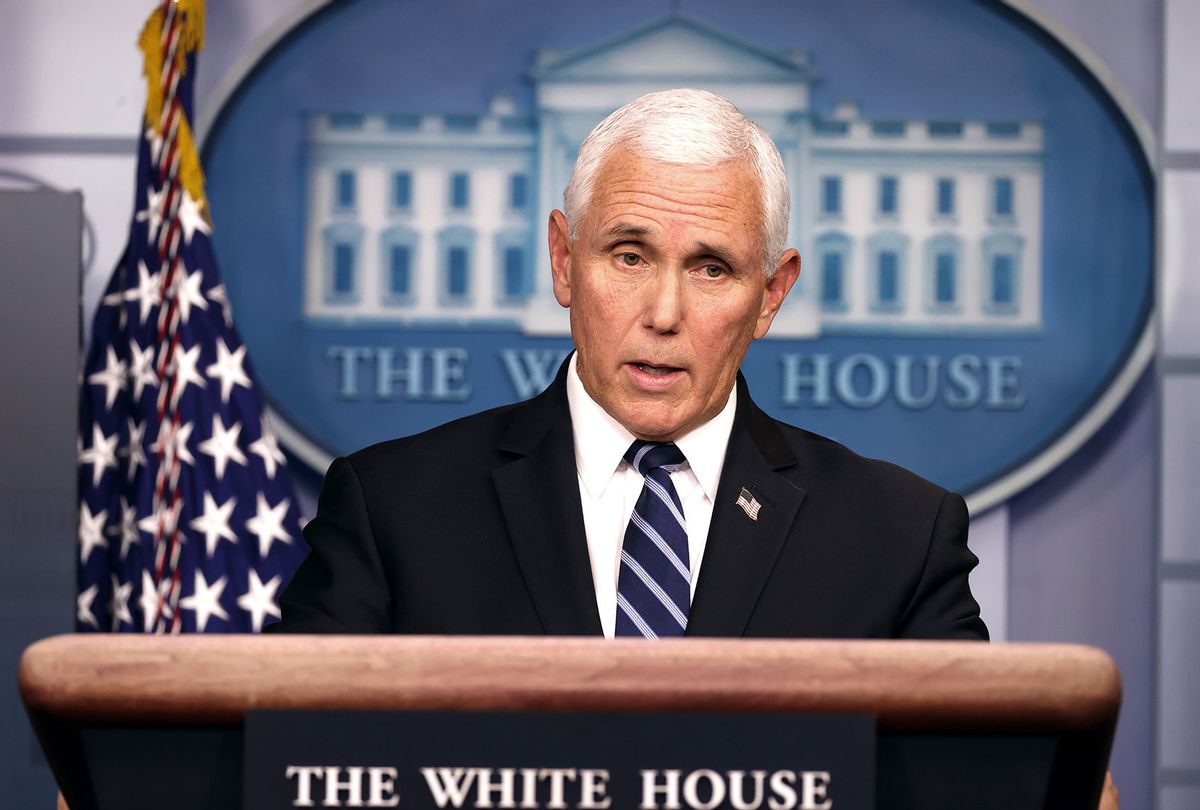 Vice President Mike Pence has come under heavy pressure from President Trump to back an unconstitutional scheme to overturn his election defeat in a joint session of Congress next week. According to multiple reports, advisers have repeatedly had to explain to the president that the vice president's role is merely ceremonial.

Trump has lost every legal challenge after failing to show evidence of widespread fraud or irregularities and is now "laser-focused" on Jan. 6, when Pence will preside over a joint session of Congress to formally count the electoral votes, as his "last stand for overturning the electoral outcome," multiple administration officials told The New York Times' Maggie Haberman. Trump has demanded tat Pence "act" to stop the ratification of the Electoral College, which cast 306 votes for Biden and 232 for Trump earlier this month, according to CNN.

Sources told CNN that Trump has been "confused" about why Pence cannot overturn the results on Jan. 6 even as "Pence and White House aides have tried to explain to him that his role is more of a formality and he cannot unilaterally reject the Electoral College votes." Trump has raged at Pence and top White House officials in recent days as they have pushed back on his doomed scheme and would view Pence carrying out his constitutional duty and validating the election result as "the ultimate betrayal," according to Axios' Jonathan Swan.

This pressure arguably puts Pence in a bind, since legally he cannot do anything to affect the result. The vice president reportedly plans to flee Washington for his first overseas trip since the coronavirus pandemic began right after the session.

"Pence's constitutional role is to 'open' the certificates. That's it," said Harry Litman, a former Justice Department official and constitutional law expert at UCLA. "Not to certify. Not even technically to count. He has no way even to purport to change the count. It'd be like saying the Oscar presenters get to decide who wins best picture."

"The idea that Pence is going to overturn the election in January is pure fantasy-land nonsense," Justin Levitt, an election law expert at Loyola Marymount University, told Vice News.

The 12th Amendment of the Constitution requires each state to submit its Electoral College results to the president of the Senate, who is the vice president. The Electoral Count Act of 1877, which was passed after several states tried to send rival sets of electoral ballots to be considered by Congress in the 1876 election, lays out the rules governing objections to the results.

"Objections to individual state returns must be made in writing by at least one Member each of the Senate and House of Representatives. If an objection meets these requirements, the joint session recesses and the two houses separate and debate the question in their respective chambers for a maximum of two hours," according to the Congressional Research Service. "The two houses then vote separately to accept or reject the objection. They then reassemble in joint session, and announce the results of their respective votes. An objection to a state's electoral vote must be approved by both houses in order for any contested votes to be excluded."

The vice president does not have a role to play in the objection process except to "preserve order" at the session.

"This authority may be interpreted as encompassing the authority to decide questions of order, but the statute is not explicit on this point," according to the CRS.

"Nothing in either the text of the Constitution or the Electoral Count Act gives the vice president any substantive powers," legal experts Neal Katyal and John Monsky wrote in a New York Times op-ed.

Moreover, the law applies to dueling slates of electors approved by state legislatures. Alhough Republicans staged alternative meetings in states where Trump has disputed the results, and appointed what they deemed alternate slates of electors, these have not been authorized by any state legislature or secretary of state. In other words, they are effectively fake electors.

None of this has stopped Trump loyalists from engaging in fanfic scenarios. White House adviser Stephen Miller bragged about the phony electors on Fox News earlier this month, claiming that "an alternate slate of electors in the contested states is going to vote and we're going to send those results up to Congress."

Pence and Trump recently met with a group of congressional Republicans to discuss a plan by Rep. Mo Brooks, R-Ala., who plans to try to challenge the Electoral College results from at least six contested states. Several House Republicans have said they plan to join Brooks in challenging the results in Arizona, Pennsylvania, Nevada, Georgia, Wisconsin and perhaps other states. Brooks would need a senator to join the effort in order to lodge a written challenge. No senator has firmly stated that he or she will join the effort, although Sens. Ron Johnson of Wisconsin and Rand Paul of Kentucky, as well as Sen.-elect Tommy Tuberville of Alabama (who will take office on Jan. 3), have signaled that they are open to the idea.

But even if lawmakers lodge a challenge, federal law only allows for a two-hour debate on whether to disqualify a state's votes. The lawmakers also plan to give a lengthy series of five-minute speeches that could delay the vote for several more hours. But in the end a majority of both chambers of Congress, including the Democratic-led House, would have to vote to disqualify a state's results, and that appears impossible. Democrats have decried the effort while numerous moderate Republicans have similarly rejected the plan. Senate Majority Leader Mitch McConnell has urged Republican senators not to join the effort. Sen. John Thune of South Dakota, the No. 2 Republican in the Senate, predicted that the effort would go "down like a shot dog."

A similar scenario played out in 2005 when a group of Democrats led by Ohio Rep. Stephanie Tubbs Jones and California Sen. Barbara Boxer filed an objection to Ohio's results after alleging "numerous, serious election irregularities." The challenge was roundly defeated by a 267-31 vote by the House and a 74-1 vote in the Senate, effectively just delaying the certification for several hours.

"The Jan. 6 meeting is going to confirm that regardless of how many objections get filed and who signs on, they are not going to affect the outcome of the process," Edward Foley, a constitutional law expert at Ohio State University, told The New York Times.

Republicans evidently realize that their effort violates the law. So a group of Trump loyalists actually filed a lawsuit against Pence on Monday, arguing that the Electoral Count Act unconstitutionally prevents him from exercising full authority over which votes to count, and asking a judge to throw out the existing rules in order to allow Pence to handpick the president.

"Under the Twelfth Amendment, Defendant Pence alone has the exclusive authority and sole discretion to open and permit the counting of the electoral votes for a given state, and where there are competing slates of electors, or where there is objection to any single slate of electors, to determine which electors' votes, or whether none, shall be counted," says the suit, which was filed by Rep. Louie Gohmert, R-Texas, Arizona Republican Party chair Kelli Ward, and a group of would-be Arizona electors.

"If the Twelfth Amendment somehow gave the vice president the power to unilaterally throw out electoral votes for the other guy in favor of their own party (and even themselves), one might think that one of them would've noticed by now," wrote Steve Vladeck, a professor at the University of Texas at Austin School of Law.

"Bottom line: There is no secret legal maneuver left to stop a Biden presidency. Pence & McConnell understand these rules & are in an awkward political position of their own sad making," tweeted Jed Shugerman, a professor at the Fordham University School of Law. "Any drama before or on Jan 6 will be merely a pathetic show of Trump loyalty/cowardice."

Though Trump's legal efforts and attempt to subvert the Electoral College results were doomed to fail from the beginning, his false claims about voter fraud and irregularities have swayed many Republican voters, who have contributed more than $170 million to an effort that his team claims funds his election challenges — but largely just flows money into his personal PAC.

Rep. Adam Kinzinger, R-Ill., ripped Trump and his Republican supporters over the weekend, describing the entire effort as a "grifting scam."

"All that is being done is certain members of Congress, the president, and 'thought leaders' on Twitter are getting retweets, getting followers, and raising money on this scam," he told CNN. "It is a scam and it is going to disappoint the people that believe this election was stolen, that think this is an opportunity to change it."