Kelly Loeffler makes mysterious last-minute donation to her own campaign 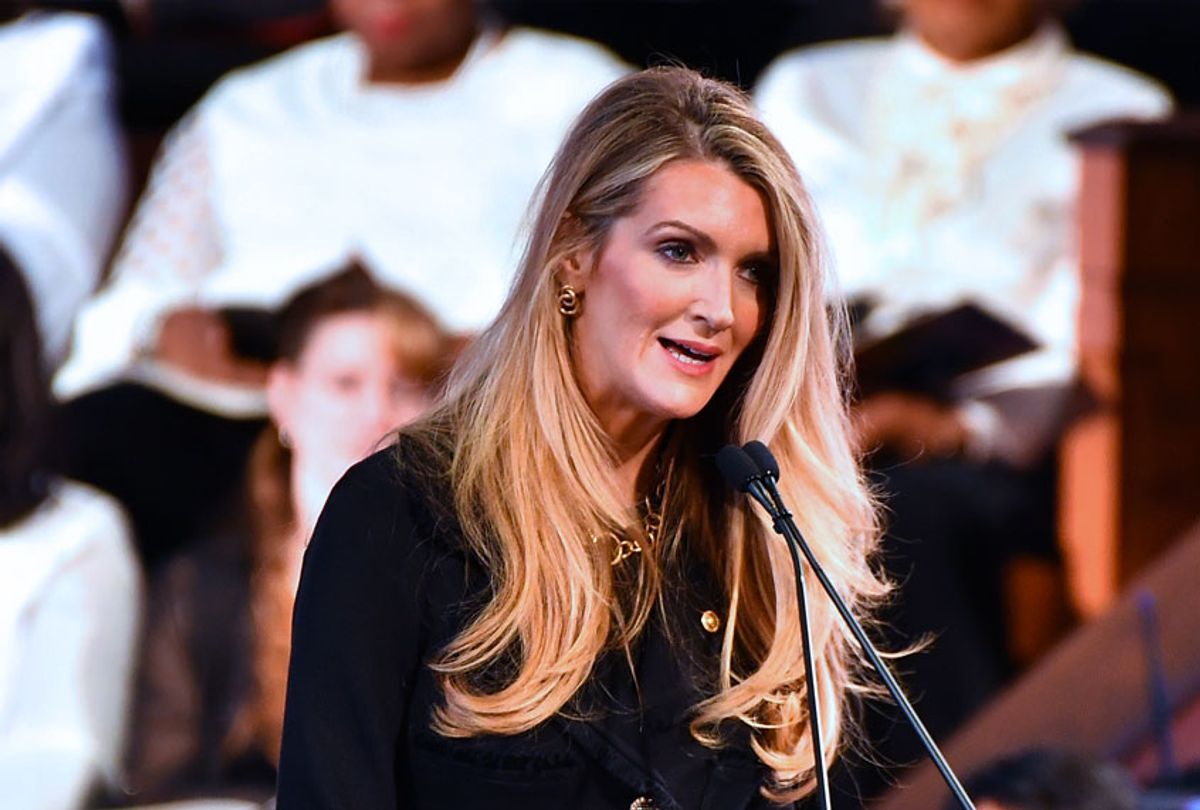 Sen. Kelly Loeffler, R-Ga., the unelected multimillionaire facing a tight runoff against Democratic rival Rev. Raphael Warnock next week, has submitted a number of irregular last-minute contribution reports with the Federal Election Commission, failing to disclose employment information for hundreds of donors in the final weeks of the campaign. For some donors, the reports show what appears to be misleading information about their employer or their position — including lobbyists and executives — some of them with notable names or corporate or personal ties to the appointed senator.

One of the more glaring irregularities is a last-minute donation from Loeffler herself, in the amount of $67,200. While the wealthy former financial exec has made a public show of funding her own campaign, those donations have so far come in injections of millions of dollars. This $67,200 contribution is notable in that it parcels out to 24 donations of exactly $2,800 — the maximum allowable amount. Because the candidate is by default an agent of the campaign, Loeffler can match donor contributions and can accept checks from donors on behalf of the campaign. However, if she does accept checks on someone's behalf, the campaign must still report the donor's identity to the FEC. And if those donors have already given the maximum $2,800, their donations would be illegal. If Loeffler were knowingly acting as a fence for those donors, that too would be illegal.

The Loeffler campaign did not respond to Salon's request for comment.

Loeffler's conflicts of interest are inescapable: She worked for more than a decade at a top global financial firm, Intercontinental Exchange, which was founded by her husband, Jeffrey Sprecher, and owns the New York Stock Exchange; now Loeffler sits on the Senate committee that has direct oversight of that business. A number of donors this year have raised eyebrows, including several million dollars from billionaire Ken Griffin, whose company closed a major deal in November that required NYSE approval.

Salon recently reported that among the donors Loeffler failed to identify were several members of the Asplundh family, owners of the eponymous multibillion-dollar infrastructure clearing company, which one of Loeffler's committees oversees, and who have properly identified their employer in other FEC reports this election cycle.

This week, Karl and Randall Meyers, listing themselves as CEO and CFO at XPO Last Mile — a subsidiary of Postmaster General Louis DeJoy's former supply chain and delivery company XPO Logistics — made Christmas Eve donations to Loeffler. The Meyers brothers also gave this month to the other multimillionaire Republican Senator under federal scrutiny while facing a runoff in the Peach State, David Perdue, as well as the Senate Battleground Georgia fund, but neither brother appears to have made any donations to any other candidate or committee this year. Each appears to have made only three other contributions ever — an amount they doubled this month alone.

Earlier this month, XPO announced plans to separate its global logistics operation from its freight and delivery division, and both companies will be traded on the NYSE — which Loeffler's husband's company owns. However, an XPO spokesperson told Salon that the Meyers brothers had not worked for XPO in several years. It is unclear why they listed XPO as their employer, and their specific positions as CEO and CFO.

The irregularities come despite what the Loeffler campaign describes as its "best efforts" — as well as readily available public information, including from the donors' own recent FEC contribution history — her joint fundraising committee, which shares the same treasurer as the Loeffler campaign, responded just this month to to an FEC notice that it had not reported employer information for dozens of donations over the summer. Indeed, the campaign failed to identify employers for hundreds more donors in several reports filed since responding to that notice — for example, here; here; here; and here.

Recent FEC reports from Perdue are also missing employer information, though not to the same extent as Loeffler (e.g., here; here; and here). By comparison, none of the recent reports for either Democratic candidate in the Georgia runoffs — Loeffler challenger Rev. Raphael Warnock, and Perdue rival Jon Ossoff — are missing any employer information.

An analysis of Loeffler's three most recent reports reveals a number of significant omissions, and shines a light on who might want to fund her fight from the shadows.

Kirsten Chadwick, of the lobbying firm Fierce Government Relations, gave Loeffler $2,500 on Dec. 27. She is listed as a "consultant" but is in reality the president of the firm, which does about $13 million in lobbying work annually, including for industries under Loeffler's purview, such as forestry, healthcare and finance. She has also worked as a registered lobbyist for both Facebook and Apple, companies Loeffler has trashed recently when she sided with President Trump against "Big Tech."

A similar story applies to Christopher Bravacos, who gave Loeffler $1,400 on Christmas Eve, and lists his job at Bravo Group as "public relations." Bravacos' Wikipedia pages identifies him as the founder and CEO of the prominent communications and lobbying firm, which in 2020 lobbied on behalf of the Pharmaceutical Research & Manufacturers of America — an area where Loeffler conducts oversight.

Anthony Dinovi, who reports being "investment manager" at Thomas H. Lee Partners, gave a max $2,800 on Christmas Eve as well. Dinovi is in reality the chairman of that Massachusetts firm which focuses "primarily on North America middle-market buyouts" for financial services and healthcare, both of which intersect with Loeffler.

W Russell Carothers, III, chair of the Federal Home Loan Bank of Atlanta gave along with his wife a total of $5,000 to Loeffler on Dec. 28, but his employer is not disclosed "per best efforts." The Director of Corporate Development for Sprecher's company, Intercontinental Exchange, came there from FHLB Atlanta.

John Pasquesi, whose occupation is listed as "self-employed," is actually the Chairman of Arch Capital Group, a Bermuda-based global real estate insurance underwriter with about $11 billion in capital. Pasquesi is also the managing member of Otter Capital LLC, a private equity investment firm he founded in 2001, according to the Wall Street Journal. He and his wife, Meredith, each gave Loeffler $2,900 — one hundred dollars more than the legal limit, which the campaign will need to return or redesignate.

Loeffler donor John MacGregor Fox listed his employer as "none," and occupation as "retired," but in earlier FEC reports this year he is identified as the Executive Chairman of Trona Energy. He is also Chairman of the Board of Kona Mountain Coffee, the Hawaii-based coffee farm. His $5,000 donation is over the maximum limit.

Melanie Foster gave $1,000 to Loeffler on Dec. 24, and listed her occupation as retired. Foster ran multiple commercial landscaping companies, but currently serves on the financial advisory board of the Michigan State University board of trustees. According to survivors of the sexual assault scandal involving Larry Nassar, the Olympic gymnastics team doctor, Foster worked in her capacity as a trustee to block an independent review of thousands of pages of documents related to sexual assault cases. The survivors allege Foster "continually demonstrated a complete lack of moral conviction to pursue the truth and ensure that what Larry did to hundreds of women and children never happens to anyone again on MSU's campus."

Another $2,800 Christmas Eve gift came from James H. Drew III of Augusta, Georgia. Drew says his employer is "Continental GA Corp," but he is perhaps more well known in Georgia for operating traveling carnival and midway company Drew Expositions, which issued a denial in 2019 after nationwide reports that the company employed a serial killer.

This fall, Loeffler's husband, Jeffrey Sprecher, completed a major acquisition of a real estate firm that marked the first foray into the mortgage industry for his company, Intercontinental Exchange. A striking number of donations have come to Loeffler from executives that industry.

One max-out donor, Edward Inman, is listed as self-employed, but has worked for more than a decade at Atlanta-area investment firm Ashford Advisers, according to his LinkedIn page. And Lincoln International's Lawrence Lawson, who contributed $1,700 to Loeffler on Dec. 27, says his occupation is "entrepreneur." He is the chairman and global co-CEO of the multinational financial firm.

Douglas Neff lists his occupation as "real estate investment" at IHP Capital Partners. He is the chairman and CEO of the prominent real estate equity firm, and gave $1,000 to Loeffler on Dec. 27.

John K. Castle gave Loeffler the maximum allowable $2,800 on Christmas Eve, and lists his occupation as "merchant banker." He is the billionaire founder and CEO of private equity firm Castle Harlan, according to his own Wikipedia page. In 2016 he sold his Palm Beach estate, once known as the "Winter White House" for former president John F. Kennedy, for $31 million. The buyer was billionaire real estate mogul Jane Goldman, who also gave Loeffler $2,800 on Christmas Eve.

Loeffler also received a Dec. 24 contribution from Pat Deon, who lists Progressive Management as his employer, and his occupation as "real estate." A 2019 article in the Philadelphia Inquirer about Deon is subtitled, "Meet the most influential man in Pennsylvania you've never heard of."

Loeffler donor Chuck Ames identifies himself as an energy trader at Vitol, a firm whose energy futures business intersects with Loeffler's government oversight role and the primary functions of her husband's business at both Intercontinental Exchange and the NYSE. This month, Vitol agreed to pay $163 million to settle civil and criminal charges that employees paid bribes for oil bids in Brazil, Mexico and Ecuador.

George Archer Frierson II, who contributed a max donation on Christmas Eve, reports as a "self-employed investor," but for other donations this election cycle is listed as an agent for Vintage Realty. The Dec. 24 maximum donation from John Ginger lists him as a retiree, but as recently as Dec. 8 he was identified in press as the CEO of J. Ginger Masonry, one of the largest masonry outfits in the Western U.S. Another "retired" West Coast donor, Jim Godfrey, is the founder and CEO of Chateau Retirement Communities, according to the company's website.

Caroll Neubauer's $1,000 Christmas Eve contribution says that the longtime CEO of the U.S. branch of the healthcare and pharmaceutical multinational corporation B. Braun is now retired. But a news release this October names him as a new executive advisor at the firm Water Street Healthcare. Loeffler oversees healthcare.

Finally, Loeffler received $1,000 from former U.S. Senator Connie Mack, R-Fla., but the campaign could not seem to retrieve his employment information, "per best efforts."