The opioid crisis and the pandemic are at least psychologically linked, as isolated people turn to drugs to cope 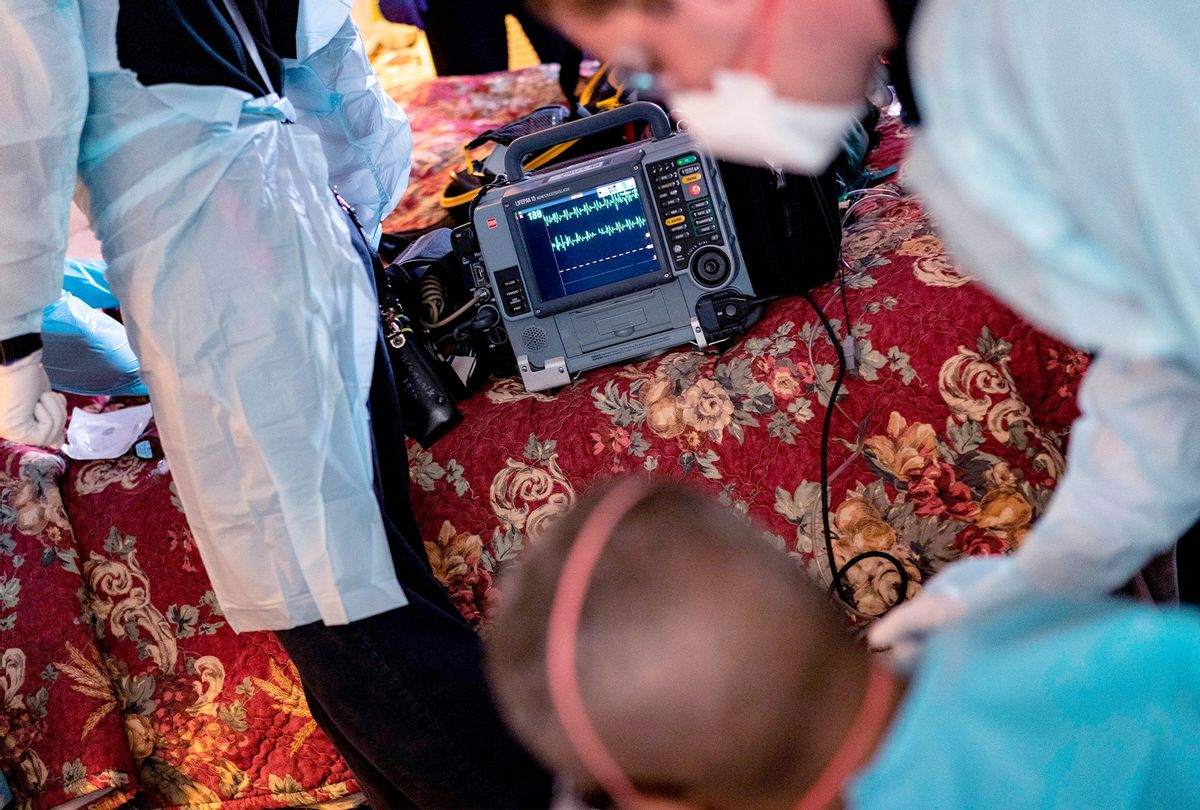 Firefighters and paramedics with Anne Arundel County Fire Department wear enhanced PPE, during the coronavirus pandemic, as they treat a patient in cardiac arrest as a result of a drug overdose on May 6, 2020, in Brooklyn, Maryland. (ALEX EDELMAN/AFP via Getty Images)
--

Cardiac arrest–related deaths have risen precipitously during the pandemic — and the reason may have to do with a mystery of coronavirus, an increase in drug overdoses, or both.

Indeed, those are two main theories explicating the rise in cardiac arrests, both compelling. First, because SARS-CoV-2 infects blood vessels, at least some of the cardiac arrest deaths may be from coronavirus infection. A second, equally sinister suspicion is that a percentage of the cardiac arrests over the past twelve months could have been "occult" opioid overdoses — a medical term that means that the drug-related cause of cardiac arrest was not recorded nor discernible.

"The way to think of it is that paramedics will arrive on scene, they called for cardiac arrests and will start resuscitating the patient, using protocols that are directed at resuscitating the heart,"  said Dr. Robert Rodriguez, who is the author of the study and a professor of emergency medicine at the University of California, San Francisco, in an interview. "So what we have shown is a certain percentage of those patients that they assume that they're assuming are cardiac arrests turned out to be narcotic overdoses."

At the beginning of the pandemic, one-third of the country's "excess deaths" were not directly due to COVID-19, according to an analysis in the Journal of the American College of Cardiology. Public health experts define excess deaths as the difference between the actual number of deaths in a specific time period and the expected numbers based on historic trends. Specifically, comparing data from January 1 to June 2, 2020, with the same timeframe from 2019, showed that deaths by ischemic heart disease increased across the country after the onset of the pandemic.

Certainly, the pandemic has been a stressful time and is affecting everyday health in a myriad of ways—especially those in low-income and marginalized communities. As Bob Hennelly reported for Salon in April, EMS workers noted that before the pandemic they would see one or two cardiac arrest calls per shift. In the beginning of the pandemic, they were attending to as many as thirteen cardiac arrest calls per shift. At the time, they suspected it was COVID-19 related. But could those deaths be related to something else — perhaps a concurrent crisis of opioid overdoses during the pandemic.

The Centers for Disease Control and Prevention reports that more than 81,000 deaths between June 2019 and May 2020 were linked to drug overdoses — an 18 percent jump compared to the previous 12-month period. But when first responders attend to what is initially believed to be a cardiac arrest, the protocol doesn't include administering Naloxone, which can rapidly reverse an opioid overdose. Rarely do people die immediately over an opioid overdose, as it often takes hours.

Rodriguez said if EMS responds to 350,000 adult cardiac arrests cases in the United States a year then, assuming 10 percent of those are opioid overdoses,  35,000 lives could be saved by administering Naloxone. That's an optimistic estimate; Rodriguez's more conservative numbers suggests 1,750 lives would be saved if the Naloxone doesn't work on everyone.

Rodriguez is hoping that his paper will help inspire first responders to cardiac arrests to include Naloxone in the resuscitation protocol. There is no risk to administering it, even if a person isn't having a heart attack.

"The idea is that using this research we can detect these occult cases of overdose-induced cardiac arrests and, you know, hopefully save lives," Rodriguez said. "Our plan is to kind of push this forward and do some more research and try to address that further."

Indeed, it is possible that the rise in cardiac arrests is related to COVID-19, too. As Salon previously reported, research has shown that those who seem to have less-pronounced COVID-19 symptoms or no symptoms at all may discover that they have heart issues later.

"That's certainly the concern," said Dr. Thomas Maddox, Chairman of the American College Cardiology's Science and Quality Committee and a professor at the Washington University School of Medicine in St. Louis, in a September interview with Salon. "Even for people who have a relatively benign infection, most people do not need the hospital even if they do have confirmed COVID-19. . . .  but at least a subset may have long-term cardiac damage."

Rodriguez said there are a "number of reasons" opioid overdoses could be on the rise because of the pandemic.

"Those include social isolation, loss of the other factors that traditionally would increase narcotic abuse, such as loss of income and loss of other outlets to generally socialize,"  Rodriguez said. "Unfortunately, narcotics and opioids remain widely available and that has not changed, presumably more people are turning to that."

Rodriguez added that more people are likely using drugs alone and don't have someone nearby to call for social or emotional support.