"Dickinson" creator on Emily and fame: "The spotlight was a dangerous place for her to be" 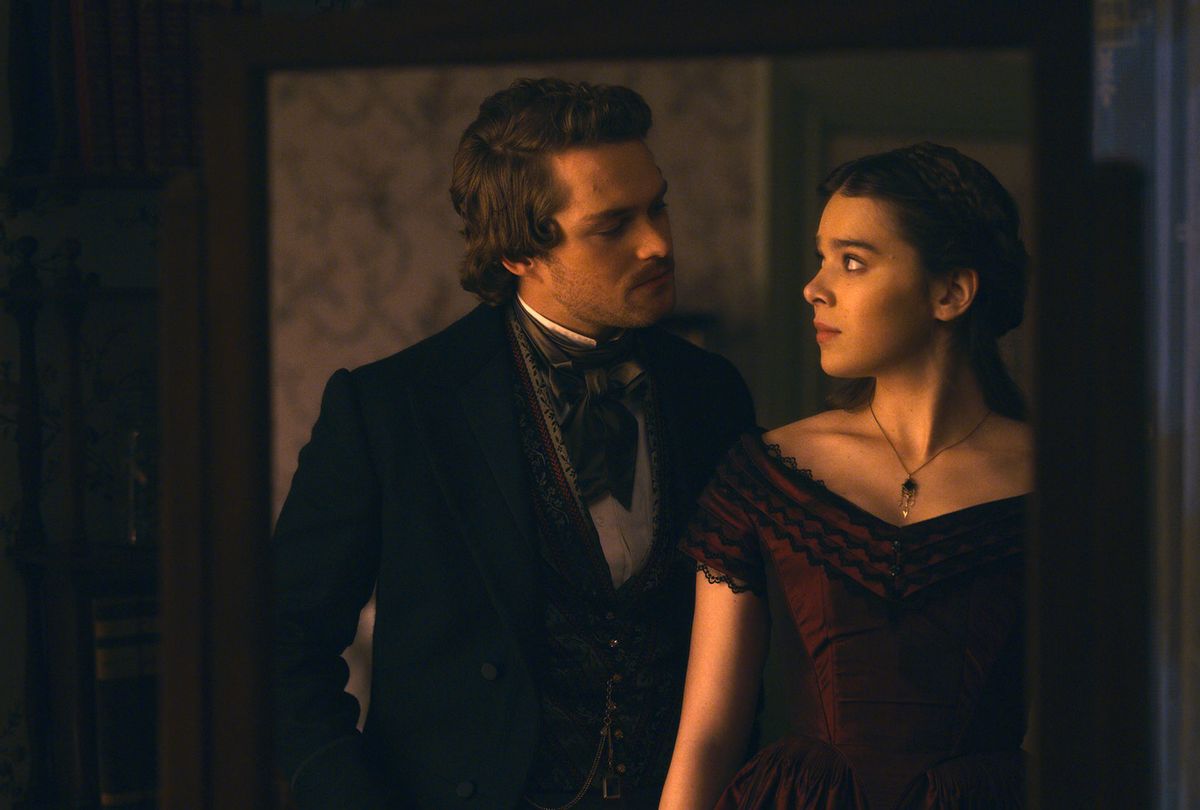 Never again let it be said that Emily Dickinson wasn't a woman with heart heated by desire. In the second season of "Dickinson" Emily (Hailee Steinfeld) has already loved and lost once, and pines in secret for two people. One of them, her best friend Sue (Ella Hunt), has permanently captured her heart. The other, newspaper publisher Sam Bowles (Finn Jones), is dashing, seductive and a little too charming to be trusted.

He also inspires Emily to dream, very lustily, about achieving fame by publishing her poetry . . .  although something inside her keeps holding her back. Nevertheless, Sam allows the poet to indulge her ego in ways her controlling but doting father (Toby Huss) never does. To boost her confidence prior to attending a party, she talks herself up in the mirror, only it's not her own voice that pumps up her ego. It's Sam's.

"Hope isn't good enough," she imagines Sam purring in her ear. "Look at yourself and say, 'I deserve this. I earned it. It's now my time to shine.'"

In Season 2 this materializes as an examination of fame that both evokes Dickinson's obsession with it and speaks to an age ruled by TikTok and Instagram. Emily gets a taste of the influencer life when she wins a local baking contest, which actually happened. (Salon's Ashlie D. Stevens even baked the cake that scored the top prize.)

But there's another purpose in showing how fame toys with Emily's emotions, which Smith discussed in a recent conversation about the new season.

The second season begins with a narrator explaining that there's a point at which the concrete, biographical details of Dickinson's life aren't as fully chronicled as they were in the timeframe that's been previously depicted. Did knowing that free you a little bit more? I mean, obviously this was never a creatively constricted series, but what does that mean in terms of the second season storytelling?

I think there's something misleading about that intro. My intention is actually to leave the door open in the audience's imagination for the ways that we push the surrealism of the show in Season 2. So in other words, this is not really about which facts are true and which facts are not true because in truth, the story is just as factual. I use the same methodology as I did in Season 1: There really was a Sam Bowles. He really did come to Sue and Austin's house. The poem that ends up going in the newspaper is a poem that was in The Springfield Republican. Emily did win the Amherst Cattle Show Baking Contest.

The facts are still the facts. But the meaning of that intro, the key line is when it says perhaps the truth is hidden in her poems.

I guess I'm pushing people to sort of question their ideas of the truth of anyone's experience, but particularly someone like Emily whose imagination so far exceeds the sort of mundane realities of her external circumstances.

I would say that like the facts about Emily Dickinson's life that always remained the most shrouded in mystery to us are fundamentally, "Why didn't she choose to publish in the traditional sense? And what was her relationship with Sue?"

The letters dry up around the years of that we're looking at here, and as always with Emily Dickinson there are these sort of delicious gaps that we get to fill.

Was the secret publication of the abolitionist newspaper a storyline you had originally intended to pursue when you originally developed the show?

Actually I'm so glad you just reminded me of that, because that's another place of where the introduction is relevant. That is all entirely made up, but it is made up in a way that can't sort of be proven or disproven. There's the theme of visibility versus invisibility, who gets to be seen versus who is overlooked or who has to work in the dark. The whole idea there is that there were many of those types of publications. I mean the most famous one is Frederick Douglass's The North Star.

But there were many black abolitionists who worked in secret basically because their lives were at stake, so they had to keep their identities a secret. So in other words, they couldn't have been famous for their work even if they had wanted to be. But because those histories have been suppressed, we haven't learned their story.

So again, it's a thing of, "Is the truth to be found in the history books? Or is it to be found in poetry?" There's more to history than what we were taught in school, because there were all these lives that went unrecorded or were actively erased. And the project of the show is about reclaiming and restaging American history to bring people into the center of it who have not traditionally been put there.

I think that there are elements of the interiority of Emily's life that those letters illuminate quite clearly. The main subjects of her poems were death and fame. There are many ways that Emily contends with fame that resonate with modern women watching this, in terms of what does it mean to really put yourself out there?

The show talks about fame and looks at fame in a way that one you can understand why Emily would want to keep her private thoughts and ideas private and not publish them in a newspaper. When you were constructing the season's plot how much of those questions that modern women face play in this season's construction?

In Season 1 we sort of get one answer to the question of "Why didn't Emily publish?" We're presented with a set of facts, or a set of interpretations of facts that says, 'Well, she didn't publish because it was a patriarchy and her father was conservative and he was opposed to it.'

And so she sort of struck this Faustian bargain with him that said, 'I can be a writer, as long as I hide out in my room and don't show anyone that I'm writing.'

But in Season 2, we kind of upend what we thought was a settled set of facts and we present a very different and more complex and nuanced, and in some ways just as sinister interpretation from a feminist perspective, which is, "Emily didn't publish because ultimately as a female artist stepping into the spotlight, she became disconnected from her own true voice, that the spotlight was a dangerous place for her to be."

So for her own reasons, she realized that she could only continue to write the poems that she really wanted to write, or to speak her truth, if she only spoke it in a certain sense, privately. You know, just to Sue or just to private readers basically rather than seeking a stage where the whole world could see her. And I think that we have to see that even if this is kind of letting dad off the hook, it is still about patriarchy and it's still about, "What does it mean to be a woman in a world that doesn't approve of women having voices of their own? And why is it always more loaded to 'seek attention' as a woman than it is for a man?"

The reason why I wanted to really drill into this idea or theme is not just because it is such an important part of, of who Emily Dickinson was, but it's because it is so relevant for our world today. And really, I think that this season of Dickinson is about us and the way that we are all today negotiating social media and the pressures of building a personal brand and as you say, putting yourself out there.

There's this kind of intensification of the act of publicity that all of us are engaged with on a daily basis right now. I think it can be actually a taboo subject to address. It can evoke a lot of feelings in people. Everybody has an Instagram account and can put as many images of themselves out in the world every day as they want to while even just like being alone in their room.

I'm glad that you mentioned that. One of the moments that stuck with me, and I'm not going to be specific about the context...speaks to the many instances in social media where men that exploit women for their own gain. And then when they get pushback they'll claim, "But I'm just being a good guy. I'm supporting you!"

Right. That's why this is still about patriarchy . . . It's actually kind of wonderful to be reflecting on that right now, because. I think the best way that women can combat that is by lifting each other up. And the best hope that the patriarchy has is keeping us divided from each other.

That's one thing I've always liked about this show is that there are so many moments of gossip and cattiness where the women in Emily's community are shady to her. And yet when the chips are down, they do support each other. They don't glory in another's downfall.

Well first of all, as a feminist, that's just not how I see the world. But I also think that it comes from Emily's story because at the end of the day, the people who saved Emily's poems were other women . . . Emily's poems were ultimately preserved as these kinds of domestic objects: she kept them in her home. She sewed them into little books, she hid them in a trunk. And it was the women around her who preserved them to be handed down like heirlooms to future generations. So yes, there are tremendous acts of  mutual care and respect always between Emily and the women around her.

New episodes of "Dickinson" are released weekly on Fridays on Apple TV+.