I made the cake from "Dickinson," an underrated feat of domestic labor 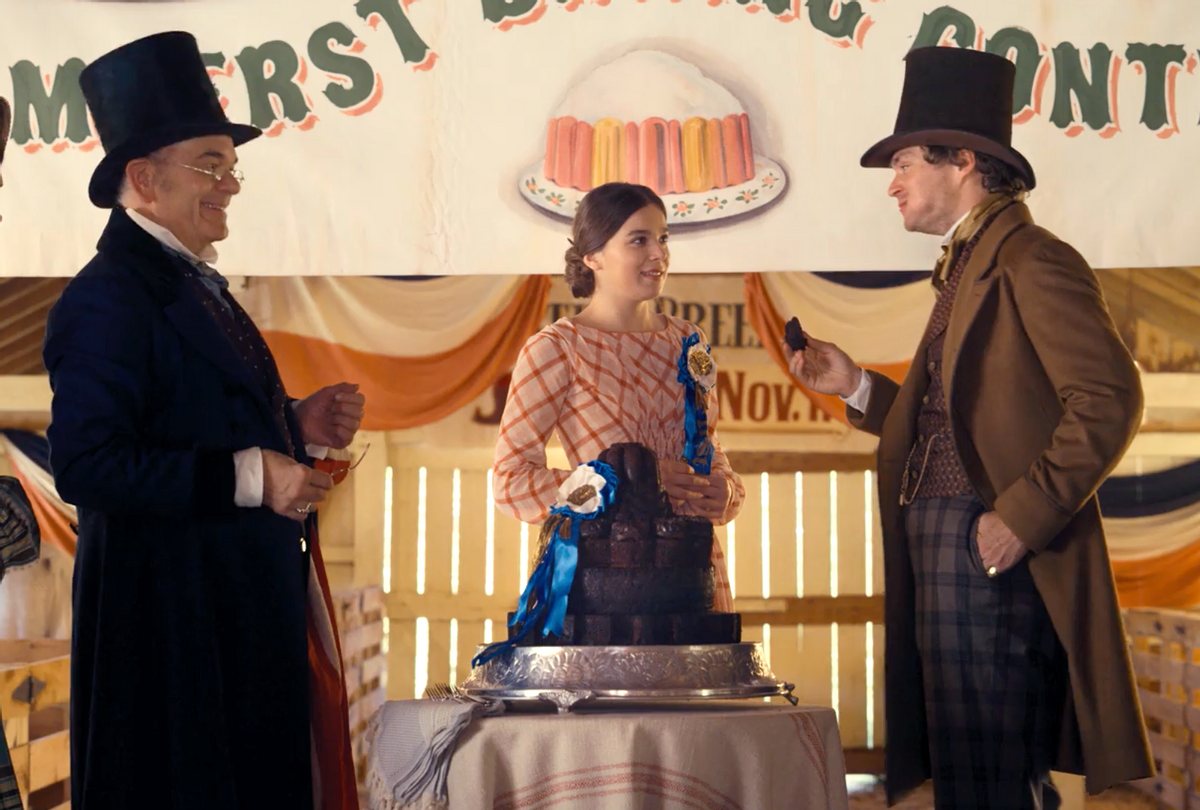 In "Fame is a fickle food," the second episode of "Dickinson" this season, Emily Dickinson (Hailee Steinfeld) presents her family with a gigantic cake. It's not particularly attractive — a dark and dense multilayered fruit cake that's made with five pounds of raisins and soaked in brandy for a month — but it's deeply flavorful.

Her family goes around the table, assuring her that it's perfect. It needs to be, she says, if it's going to win the baking contest held at the annual Amherst Cattle Show. Last year, Emily came in second, and that felt like a failure. "I'm going to give this town a moist, sticky, generously spiced ass-kicking," she declares.

And — mild spoiler — she does. Her cake is an immediate hit with the judges, whose eyes roll back into their heads as they savor each bite. The publisher of the local newspaper wants to print Emily's recipe. Her mother (Jane Krakowski) declares that they'll take on the entire cattle show circuit."One win is nice," she says. "Two is momentum. Straighten your ribbon, dear."

Coming off last season, where Emily is reprimanded again and again by her parents for wanting to see her poems published (if you remember, her father, played by Toby Huss, has that memorable line about how "women who seek literary fame are no better than whores") it's fascinating to watch her ascend to local stardom in a way that is considered socially appropriate for the time period.

There's a cruel irony to it, to be sure, which Sue (Ella Hunt), her sister-in-law and lifelong love, remarks upon.

"I think it's a little absurd, don't you?" she said. "That you'll be remembered as a baker, not a poet."

As it would turn out, Dickinson — who actually was a talented baker in real life — would not be known widely in her lifetime as a poet. It wasn't until after her death that many of her poems were published, and the first academic collection of her work, a three-volume set edited by Thomas J. Johnson, didn't come out until 1955.

And while this episode sheds light on Emily's complex relationship with fame and anonymity, it also brings up an important point about the intersection between domestic labor and notoriety. For centuries, baking and home cooking was viewed as women's work. Was it a leisure activity? Eh, potentially for some women, like Emily Dickinson, who had means and a maid to help out — but it wasn't treated as a professional endeavor, and it certainly wasn't meant for men.

Eventually, this led to a gendered divergence in modern cooking: men were seen as chefs who could run high-stress professional kitchens, while women managed things at home. Even still, when women are dismissively told to get back in the kitchen, no one is telling them to suit up and work the line at a restaurant.

"The media-fueled mystique around chefs is rooted in their image as professionals and artists — technically gifted and extraordinarily creative, dedicated to the pursuit of excellence and seeking to revolutionize the way we eat (backed up by mountains of profiles portraying them exactly as such)," wrote Meghan McCarron for "Eater" in 2017. "Conversely, women cooking at home are portrayed as relying on instinct and love, hewing to tradition and happy to nurture their families for free."

This is despite the fact that home cooking is an essential skill. It takes years of practice and well-hewn technique to develop the kind comfort in the kitchen that many still dismiss with phrases like, "It tastes better because of Grandma's love." No — Grandma has spent decades over a stove and knows what's what. She didn't suddenly develop the ability to eyeball a tablespoon when she turned 75.

The divide between home cooking and professionalism was and is such that in a New York Times piece (written in 2006!), Eileen Gannon, a senior financial consultant for Smith Barney in Des Moines and a state fair competitor, told the publication that she used to feel like she had to hide her fair work from her office mates because it would compromise her professional image.

"But now I send the extra cakes to my clients," she said. "There is so much more respect for these domestic arts than there was 15 years ago."

That's why, in "Fame is a fickle food," the emphasis on Emily's mother's response to her win is deeply telling. In the season prior, she remarks that her daughter would be "the ruin of this family [since] she doesn't know how to behave like a proper young lady." Her celebration of Emily's cake competition win sends a clear message.

Emily may be excelling, but she's still in her society-approved place. While it speaks to the limitations professionally placed on women at that time, it's also a spotlight on how society has consistently disregarded women's labor in the kitchen. Because the thing is, Emily worked hard on that cake. For those of who have embarked on multi-step, multi-day pandemic baking projects, the amount of effort she describes will resonate.

As she tells the judges, she tweaked the recipe for a traditional Black Cake which is a flavorful fruit cake variation that is associated with the holidays through much of the Caribbean. Her 20-pound version has an outsized ingredient list.

"It has two pounds of sugar, and two of butter, but I swapped in beef suet for a richer flavor," she says "Two whole nutmegs, 19 eggs and five pounds of raisins. A pound and a half of currants, citron for flavor. All soaked for a month — the recipe calls for two weeks, but I doubled down."

In honor of Emily Dickinson, I made a version of her cake — put together based on the episode's description, and borrowing heavily from recipes by the New York Times, Washington Post and Food 52. This variation is scaled down to fit into a standard loaf pan (and so you don't have to spend $60 on dried fruit), but obviously feel free to go bigger. I have a feeling Emily would prefer it that way.

1. In a large plastic tub with a lid, combine the fruit, brandy and rum. Cover and let the mixture soak at least overnight (it can be soaked for up to three months). Once you're ready, drain liquid from the fruit and place it, in batches, in a food processor until minced into a thick paste. Set aside.

2. When you're ready to bake, grease the loaf pan with butter and cover the bottom of the pan with parchment paper. Using a standing mixer, cream together the butter, shortening, eggs and brown sugar until completely smooth and fluffy.

4. Add the vanilla extract and the molasses, and beat until the batter is smooth. Then add the fruit paste, mixing until fully combined.

5. Pour the batter into the prepared loaf pan and place into a 250-degree oven for 60 minutes, then reduce heat to 225 degrees. Bake 2 to 3 hours longer, until a tester inserted in the center comes out clean. If the top of the black cake is browning too quickly as it bakes, tent it with some foil.

6. Remove the loaf from the oven, and allow it to cool slightly in the pan on a wire rack.

7. Meanwhile, combine the remaining rum, ¼ water and two tablespoons of brown sugar in a small saucepan. Whisk over medium heat until the sugar is dissolved, then set aside.

8. Use a skewer to poke holes about an inch apart all across the loaf, and brush it with the rum mixture and allow it to fully soak in. Do this again and again until you've used up all of your soaking liquid.

9. Cover the loaf pan with plastic wrap and let it stand for at least an hour. A day or two is preferable (though you can try the whole month like Emily did). When ready to serve, run a round-edged knife around the edges of the loaf to loosen it, then invert it onto a serving platter.

10. Cut into very thin slices and, if you like, top with a dollop of whipped cream and some more citrus zest.