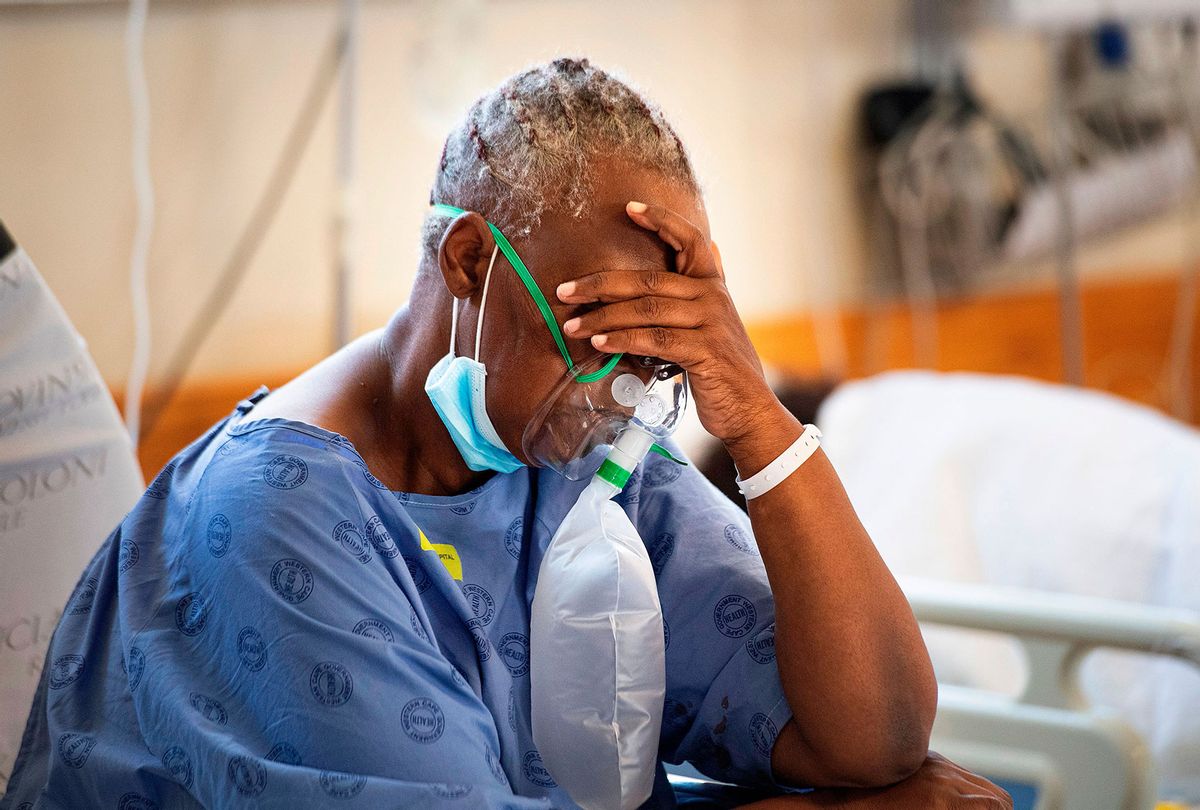 A patient with the COVID-19 breaths in oxygen in the COVID-19 ward at Khayelitsha Hospital, about 35km from the centre of Cape Town, on December 29, 2020. (RODGER BOSCH/AFP via Getty Images)
--

A mutant strain of the novel coronavirus discovered in South Africa appears to be able to ward off antibodies from individuals who had previously recovered from COVID-19 — meaning if the new strain becomes widespread, we may see more people getting infected multiple times.

A group of South African scientists made this discovery in a paper published earlier this week by South Africa's National Institute for Communicable Diseases. In it, researchers describe how they studied blood samples from a small group of people who had developed COVID-19 but ultimately recovered. When the human body recovers from a disease, it produces a protein known as an antibody to identify and ultimately protect itself in the future from the bacteria or virus which caused it to become ill. (These illness-causing microorganisms are known as pathogens.) This means that people who were sick with COVID-19 should in theory have antibodies that recognize the pathogen which causes it and neutralize it in the event that they are reinfected.

Instead, according to the authors of the paper, half of the blood samples of the patients they tested did not have the antibodies necessary to protect them from the 501Y.V2 strain of the novel coronavirus, which was identified in South Africa last month. While it was a small study and more research will need to be done, the initial results are not auspicious.

Not only could this interfere with the human population's ability to develop natural immunity, it could also hamper the efficacy of the Pfizer and Moderna vaccines. Both companies are distributing mRNA vaccines, which are different from traditional vaccines that train the immune system to develop antibodies against pathogens by injecting weakened or dead versions of the disease-causing agents into the body. mRNA vaccines, by contrast, inject a synthetic single-stranded molecule of RNA that infects our own cells and makes them produce the protein that grows on the "spike" on the exterior of the coronavirus. The presence of this protein in the body is then recognized as an intruder, and the immune system learns to identify the coronavirus as an enemy and protect against it.

In the case of the COVID-19 vaccines, both of them train the body to recognize a protein on the SARS-CoV-2 virus known as Spike. Spike is the protein that helps the virus enter human cells and resembles little pins that stick out from the sphere of the virus itself, like the spines that poke out all around a sea urchin. Unfortunately, the South African mutation alters that very protein, meaning that it could affect the vaccine's efficacy.

The South African strain is not the only one raising concern. There is a new strain in Brazil that the scientists argue "also has changes at key positions" in ways that could impair antibodies' effectiveness against the disease. Then there is a strain in the United Kingdom known as B117 that, though not deadlier than previous strains, is more transmissible.

"I think transmissible is definitely the word to go with because that highlights what we do know and what we don't know," Dr. Dylan Morris, a postdoctoral research scholar at UCLA, told Salon earlier this month about the British strain. "Even if the disease severity isn't increased or even if it decreases by a small amount, 'more transmissible' is still a very scary thing at this point in the pandemic, because that could result in faster spread and faster exponential growth."