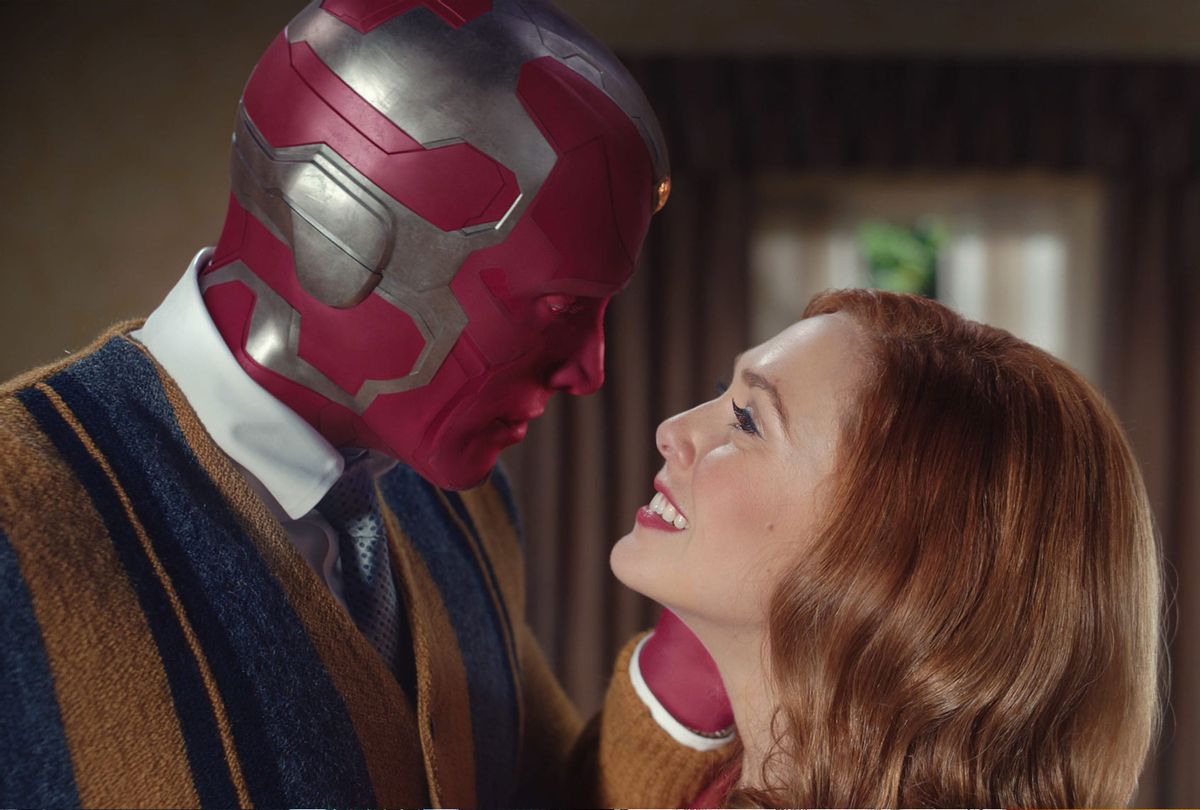 Comic book fans and TV nerds share a singular and at times aggressive level of pride in knowing their stuff. It should not shock you that many TV critics consider themselves to be a bit of both, since having an extensive bench of knowledge about the small screen's history and an ability to recall random superhero backstories on demand require the same thing: a lot of alone time.

While other adults have fond memories of summer spent outdoors, we sat in our basements or bedrooms watching afternoon reruns of "The Partridge Family" and poring over pages of "The Uncanny X-Men."  This is said not in condescension but from a place of experience or, if you'd prefer, a sense of authori-tah.

"WandaVision" is a highly calculated construct made to for people like me, but foremost it's made for Marvel to boast that it has taken an artform long disregarded as common, even lowbrow, and used it to elevate the medium. By artform, of course, I mean television. And comic books. And, well, industry-killing superhero franchises.

"WandaVision" is a calculated intersection of all three. It assumes an emotional connection to TV history and at the same time takes advantage of the ways that our interaction with the medium has evolved. Previously I argued that it's somewhat less important for the viewer to be steeped in Marvel lore than to have an affection for classic TV. Episode 3, "Now In Color," further convinces me of this.

The first two episodes mightily strive to be dead ringers for "The Dick Van Dyke Show" and "Bewitched," and unless you're caught up on the movies and you grew up glued to Nick at Nite or syndicated reruns of those old shows it is highly likely that – sorry, can't help it – your were bothered and bewildered by what you saw. Bored, even.

But the third episode accurately imitates the candy-colored views of the world presented in "The Brady Bunch" and "The Partridge Family" as a suddenly pregnant Wanda (Elizabeth Olsen) and Vision (Paul Bettany) realize they're about to go from childless and just married to new parents in the space of, at most, a couple of days.

"Is this really happening?" Wanda asks at the end of the second episode when her baby bump magically appears. By the end of their third episode romp they have two baby boys of their own despite all rules of human biology and, oh yes, the fact that Vision is a mechanical creature incapable of procreation.

"The Brady Bunch" may be the most familiar classic American sitcom in all of television, – or if not it's at the top of the list – and since so many people know the show's look, music, outfits and beats, they can also very easily recognize what's wrong with the picture we're being presented.

A neighbor's shrubbery trimmer accidentally cuts through a brick wall. A stork appears out of nowhere and starts walking around the room as Wanda does her best to distract her neighbor Geraldine (Teyonah Parris) from noticing it. Vision rattles off a list of things he's noticed that don't make sense, and the scene suddenly rewinds to a point where he gets back on a merrier script. At a pivotal point the laugh track stops, and people stop pretending for a moment. But only a moment.

"Now in Color" does less to mask the incongruity between the happy fiction Wanda and Vision are showing the audience and the truth of what may be actually happening, and ends by providing a glimpse behind the curtain, as it were, when Wanda accidentally breaks character and sends Geraldine flying out of the cul de sac . . . and into a reality that looks much like our own, except she lands on what looks like a militarized zone.

Initially I wondered why Disney+ allowed critics to see this week's episode ahead of time but withheld it from the general public at premiere until I witnessed the first reactions to "WandaVision." Then I understood why the show did this – it wants to confuse people, yes, while also piquing curiosity. But it's also working in the full awareness of a streaming show's tendency to string viewers along for weeks before giving them a massive payoff.

"Now In Color" drops the first of what I expect will be many payoffs, since Marvel previously announced that Parris' character is actually Monica Rambeau – a character introduced as an 11-year-old the 1995-set "Captain Marvel." Monica is the daughter of Carol Danvers' best friend Maria, a.k.a. Lieutenant Trouble. Now she's an adult and apparently working for the people associated with the sword symbol Wanda's been seeing around town (and on a necklace "Geraldine" was wearing).

I'm getting into the weeds here which, again, is what director Matt Shakman and writer Jac Schaeffer and Marvel chief Kevin Feige want us to do. If they have their way, the audience will be constructing a crazy wall that will dwarf the most exhaustive post-episode breakdowns of "Lost."

Short of that, there's enough to appreciate in the way the show uses the moves of a sitcom to accentuate Wanda and Vision's unreality, and I'm guessing more people will come around to this concept as the comedies presented draw nearer to resembling the ones we're still actively watching.

Vanity Fair's Joanna Robinson is a Marvel specialist, and in her "WandaVision" guide she teases that next weeks' '80s episode is an ode to "Family Ties," with a "Roseanne" homage taking us into the '90s and "Modern Family" and "The Office" tributes coming in the weeks after that.

All of these shows were known for somewhat honestly speaking to their eras in ways "The Brady Bunch," "Bewitched" and "Dick Van Dyke" never aspired to do, and that potentially changes the nature of the menace behind the forced fakery central to Wanda's world. Or, as Salon Culture editor Hanh Nguyen puts it in a discussion we shared, it's "the metacommentary of how these fake depictions of domestic bliss always had this underlying dread for me."

That it's also operating with an awareness of its format as a streaming series – thereby allowing us to consume it like a serialized story or a single graphic novel gulp – proves the show knows what it's doing, who is watching and how we're reading it.

That it is as demonstrably in love with the art of television as it is with the art of comic and superhero mythology is a satisfying reward to everyone who traded in time in the sun for hours in other worlds. Whether we get it yet is less important than feeling the love in a real way, in this version of now.

"WandaVision" is now streaming on Disney+ with subsequent episodes arriving weekly on Fridays.