"WandaVision" is a bewitching, bizarre marriage between classic TV and Marvel superhero movies 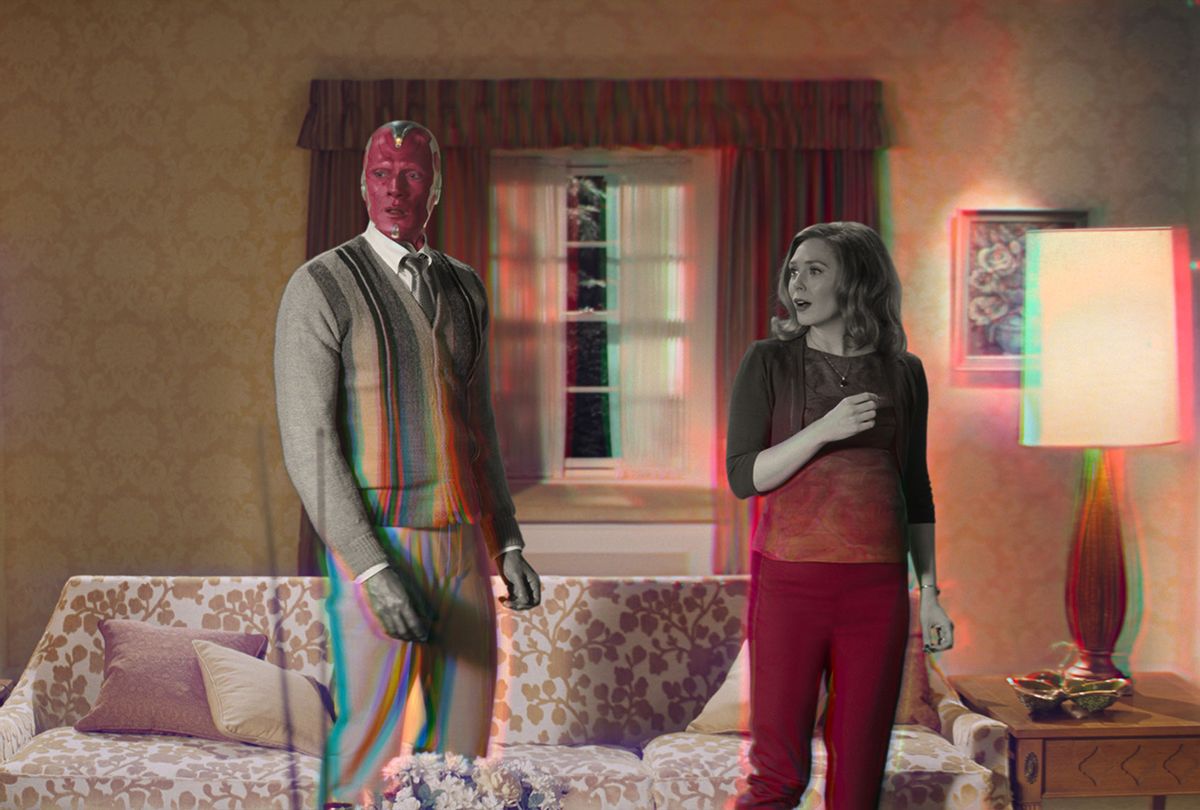 Artifice is the classic sitcom's defining characteristic, especially in shows made in the 1950s, '60s and '70s. Each of those decades marked by tumultuous change or, speaking of the '50s, a determined recovery from a world war, inspiring producers to create family-friendly escapes. In these secure TV bubbles, no problem was too massive to surmount within half an hour, and gales of laughter buoyed the onscreen action like gentle ocean waves on a clear sunny day.

And every week, no matter what, the story ends on a happy, feel-good note.

This is not the environment one expects to meet Marvel Cinematic Universe heroes Wanda Maximoff (Elizabeth Olsen) or Vision (Paul Bettany), last seen in "Avengers: Infinity War" and "Avengers: Endgame" – and in movie theaters, not on TV.

This is only the beginning of what makes "WandaVision" such a strange, creatively adventurous pastiche: it takes a pair of technicolor superhumans capable of felling titans and drops them into an assortment of half-hour comedies. And their first mission sets them down inside of a merry black-and-white paradise that is a dead ringer for Rob and Laura Petrie's place on "The Dick Van Dyke Show."

Where Van Dyke's Rob Petrie trips over a piece of furniture as he comes home in that old show's opening credits Vision, being able to pass through walls, avoids the stumble and phases right through. A subsequent ode to "Bewitched" shows Wanda, aka Scarlet Witch, wiggling her fingers, not her nose, to lift a kitchen's worth of pots and pans in the air.

Like her great love Vision, Wanda's power originate from the Mind Stone, one of the Infinity Stones containing god-level powers that drove The Infinity Saga. Vision gained full sentience and life by way of the Mind Stone, which was embedded in his forehead until . . . well. All that matters now, at least to Wanda, is that they're living the script of a perfect romance.

Those MCU movies pitted the lovers against foes of enormous power and, at times, each other. Now their greatest challenges are to fit in with the rest of the neighbors and impress Vision's boss.

The Infinity Saga is the collection of related films than begins with 2008's "Iron Man" and ends with "Endgame."  The next stage of this trip, referred to as Phase 4, officially kicks off this year with "Black Widow."

That said, the two-episode launch of "WandaVision" feels like a worthy bridge between the past and the MCU's future.

For a while Marvel was expanding every which way on TV while tacitly conveying the impression that its smaller screen titles were somehow lesser projects than its theatrical giants. ABC's recently departed "Agents of S.H.I.E.L.D." occupies in the same universe as the films while operating under its own narrative power, as does Hulu's "Runaways." The Netflix series  – "Daredevil," "Luke Cage," "Jessica Jones" and "Iron Fist" – were distinct efforts to build a franchise around The Defenders. Each ranged in quality and watchability from the culturally significant, as "Jessica Jones" proved to be,  to . . . "Iron Fist."

Then in 2019 Marvel cut ties with Netflix, ceasing production on all Defenders-related titles.

Recalling the most basic outline of this business history matters, you see, because "WandaVision" puts to rest any questions as to whether the company actually values television not merely as a medium, but an artform. The two-episode debut is a resounding answer in the affirmative, adroitly drawing from small screen history with the same level of reverence and wonder as its elaborate superhero mythology.

"WandaVision" is banquet for fervid TV viewers and moviegoers alike, and its ambition doesn't stop there. Each episode is also made to please comic book readers who want to see more of the worlds and characters explored on the page receive screen time.

Possessing some baseline of knowledge about old TV shows is probably more important in the opening episodes, especially when it comes to the distinct tips-of-the-hat director Matt Shakman and writer Jac Schaeffer direct toward those TV icons. Their dedication to replicating and tweaking recognizable details from these shows and TV in general is strewn throughout all the episodes with admirable precision.

Then again, looking at the talent bringing this big swing to fruition, we shouldn't be surprised that it works so well. Olsen's prodigious talent and versatility has never been in question, particularly to anyone who saw her nuanced performance in the too-short-lived Facebook series "Sorry For Your Loss." Fortunately for both viewer and actor this show does away with the unfortunate faux eastern European accent her character was strapped with in her movie introduction. (Wanda is a native of a non-existent country called Sokovia.)

Bettany's physical comedy skills will be more of a pleasant surprise given his drama and action film-heavy filmography, and they steal the spotlight in the second episode when Vision, a synthetic sentient being (or synthezoid) accidentally takes his playacting as a human one step too far.

Placing Kathryn Hahn high on the credits clues the viewer into her importance to the story, and she's also magnificent as Agnes, the obligatory neighbor who seems helpful but we suspect also has a touch of Gladys Kravitz hiding behind her smile. Hahn rarely disappoints, and that's even true when the show around her is failing the grade – and in a winning project like this, she's bright as a daystar.

But as much credit for the success of "WandaVision" is owed to the aesthetic choices as the acting. Shakman is a longtime producer on "It's Always Sunny in Philadelphia," a series built to lampoon TV fakery. Here, he gets to use its tropes and practices to tell a story that only seems light on its face but is plainly masking something sinister. The "Dick Van Dyke" homage is presented in the good old 4:3 aspect ratio that is a hallmark of early TV; coupled with the story's context, the effect makes it appear as if we're watching Wanda and Vision cavorting inside of a living diorama, or a terrarium as opposed to a neighborhood.

The second episode gives them their own version of "Bewitched" right down to the animated opening, an icon of TV Americana doubling as a wink at Wanda's superhero moniker Scarlet Witch. Disney+ is wise to present the first two episodes as something of a matched set because that establishes the show as meant to be binged, and the structure as something that's deceptively cozy, recognizable but untrustworthy.

As the show progresses the TV tributes become more universally recognizable, starting with third episode's a funhouse mirror reflection of "The Brady Bunch" – the set design nails the look of that iconic split-level living room down the smallest nook. But this also is where the plot's weirdness begins to bear fruit with increasing fullness and speed.

No detail about the shows imitated in "WandaVision" has been overlooked including, and quite crucially, the canned laughter. Watch one of the early vintage series that inspires this adventure and you may notice that while they're long on charm, the quantity of knee-slapping punchlines is actually fewer that you may remember. In lesser shows they're a cover for mediocrity, but even in the best ones the track functions as Pavlovian cue letting us know where and when to giggle.

When we watch Wanda and Vision trip along happily the recorded laughter fits for a while until it doesn't; as do the heightened reactions from their TV neighbors and co-workers.

Other familiar faces for consistent TV viewers only increase the meta nature of the show, including guest star appearances by Debra Jo Rupp from "That '70s Show" and "Buffy the Vampire Slayer" alumnus Emma Caulfield. Teyonah Parris (of "Mad Men") also sparks as another of Wanda and Vision's helpful neighbors who, like everyone else, probably isn't what she seems to be.

Maybe the familiarity of these faces is a subtle nod at a deeper meaning; for example, if you recognize Caulfield you may also know that "Buffy" creator Joss Whedon co-created a crucial addition to the Marvel Universe. And that might matter.

But then again, maybe it doesn't. (Who am I trying to fool here – of course it does.)

Whether you picked up the implications of that hint or it flew right by does not matter, although the episode made available to critics might as well be baskets of Easter eggs. Sharp-eyed MCU devotees accustomed to scouring the scenery's fringes for the smallest details will consider themselves well served, in that regard.

Even if you don't possess an encyclopedic knowledge of this franchise, or if you don't have time to watch the final "Avengers" films to remind you of where the MCU left Wanda and Vision's story, don't let that put you off from watching "WandaVision" now and checking out the films later. There are many guides to the couples' section of the Marvel galaxy online, including official Marvel summaries like this one, and this one.

And assuming that you're interested in this title at all, you only need to keep a few key things in mind.

First, comic books constantly play around with alternate existences and parallel universes. Second, Wanda has the power to bend reality, making her one of the most powerful characters in this universe – also potentially the most dangerous, since she's still learning the extent of her capabilities.

The final unavoidable truth that whatever type of program "WandaVision" turns out to be, the conclusion of this love story ins't likely to offer simplistic comfort. But we simply don't know enough about anything for going on here except for the fact that we like what we see and that we're profoundly curious to find out if the finale flies these characters toward some kind happily ever after or into a torrent of tears and explosions.

Either way this is soaring, original unreality worth seeing through to the finale, be it bitter or sitcom sweet.

The two-episode premiere of "WandaVision" is now streaming on Disney+ with subsequent episodes arriving weekly on Fridays.