There's a little bit of Larry King in every decent interviewer, whether they like it or not 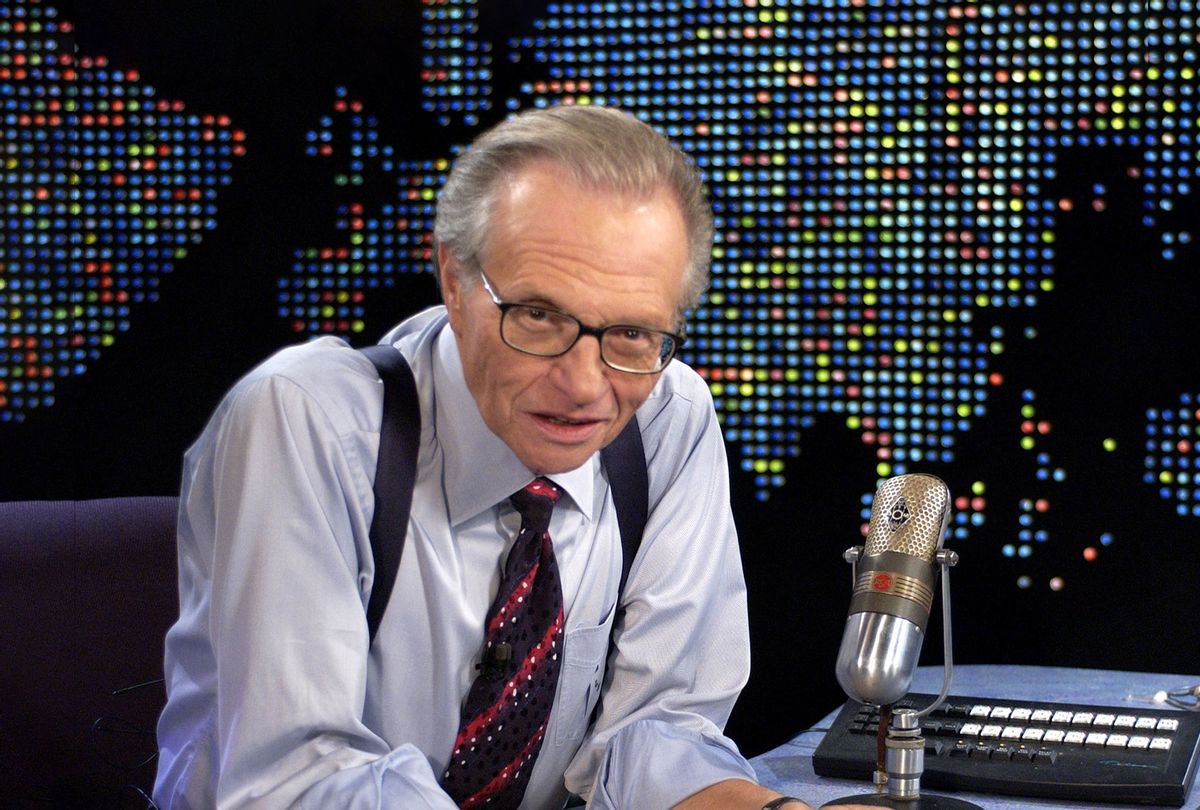 Shortly before Larry King died on Jan. 23, the internet gifted us with a reminder of why he was one of the 20th century's most powerful interviewers, and why the 21st century ushered him into irrelevance. It all comes down to a single question: "A luxury you can't live without."

Anyone who keeps up with viral memes knows exactly what this is referencing. At the end of December this question launched a clip from King's February 2020 interview with Danny Pudi, an actor and director best known for playing the insightful oddball character Abed on NBC's "Community."

Pudi is not the sort of actor King would have booked at the height of his powers, an era when presidents, pop stars and other headline makers sat down across from him and that gleaming vintage microphone sitting inches from his face. Nobody should complain about that because in fact, between the two of them Pudi is probably more beloved and better known by younger media consumers.

More relatable, too, as Pudi's answers prove. The first luxury of choice that came to his mind was coffee. King scoffs at this, leading Pudi to take a second crack at the question by offering, "I like socks."

"Socks," King repeats. "Your socks, what, you put in your shoes?" Pudi explains he likes cozy feet. Neither of these answers are good enough for King. "Coffee and socks are not a luxury."

"Alright, gimme a luxury," Pudi says. "What luxury should I have?" And King purrs, knowingly, "A private plane."

Pudi looks baffled for a beat before delivering what may be the most perfect answer to a Larry King statement since Marlon Brando smooched the man on the lips. "Larry, I'm on 'DuckTales.'"

Without intending to, Pudi unlocks a few achievements in this response, starting with flipping the classic "Don't you know who I am?" rejoinder on its head. Time was that being one of Larry King's guests was the ultimate signal that you had gained entry into celebrity heaven; if you were sitting across from him you were the type of person who never needed reservations at exclusive restaurants or had enjoyed exclusive access to a few private jets in your time.

Pudi is not one of those folks. This is not to imply he never could be, he just isn't right now. The performer has better pop culture currency these days than the late King, though, in that he's perennially interesting and relatable. More people who watched that video relate to Pudi's designation of good coffee and quality running socks as a luxury than King's declaration that those things aren't special. For a millions of everyday people, they are.

Beyond this, however, is that this friendly exchange evinces why King, a man who took pride in minimal preparation for his interviews during most of his 63-year career in broadcasting, slipped from his prominent berth on CNN's "Larry King Live" to a "Larry King Now" on Ora.TV, a digital channel he co-founded. It wasn't merely a matter of ageism or his faltering health, I suspect. It's that his guileless interview style quickly went out of fashion as more combative punditry came into style.

Not long after "Larry King Live" debuted in 1985 it earned the highest ratings of any program on CNN. The show became as vital of a stop for campaigning politicians and stars selling their latest movies as "The Tonight Show" or "Oprah."

Even then, many hosts and journalists were more skilled at the art of the interview than King was. Ask people to list their favorite professional conversationalists, and certain names are almost guaranteed to earn multiple mentions: Howard Stern. Terry Gross. Marc Maron. Jon Stewart. David Letterman, if you're counting hosts skilled with getting great answers out of uncomfortable questions. Bill Maher, if you don't outright detest the guy.

If King has a place on those list it's usually out of respect for his fame and his 25 years with CNN and multiple cameos in films and TV shows, not necessarily out of any innovations he added to the form.

Ponder this excerpt from a gift of a conversation with Madonna, circa 2002.

"You're an entrepreneur. You're a marketer," he says. She replies, "Yes."

"I live a highly scheduled life," she says. "There's absolutely no time wasted. I'm very focused. And I have a great assistant."

The more you know. Cue the rainbow and shooting star!

Still, there's a little Larry King in every great interviewer, whether they'd cop to it or not. Since he didn't deeply research his guests, he tended to ask questions the average person might want to know. In the maximalist '80s and '90s that approach worked wonders. King made his subjects come across as people – real people, serious people.

Politicians in the hot seat softened and came off as more human even as they answered questions that seemed serious but were nowhere in the same realm of toughness as they would be if a major network journalist was doing the interrogating. He wasn't imposing or intimidating, he was a nice guy asking for simple explanations to simple things about which he was curious.

In the wake of 9/11, that casual style left us wanting. When disasters erupted, King's main role was to wrangle CNN correspondents and give George W. Bush's cabinet members a forum that was largely unchallenging. As partisanship grew more rancorous, we learned to turn to "The Daily Show" or, for conservatives, Fox News' primetime lineup instead of to King who, until that era, ruled the cable primetime roost.

That he refused to be combative or contentious wasn't the main problem. It was that his professed dedication to open curiosity came across as unquestioning. Usually with celebrities, this was fine and welcome. This, in fact, was as much a part of the brand as King's signature eyeglasses and suspenders. But when presidents, cabinet members and congressmen were on the other side of the table, he was basically doing them a service instead of putting their feet to the fire.

And as one would expect from a career consisting of somewhere around 60,000 interviews, there are more than a few mind-reeling exchanges we can look back on with 20/20 hindsight and simply wonder whether there were signs we should have noticed back then, like a 2010 chat in honor of his 25th anniversary with CNN.  In this special case, King was the one answering questions.

His interviewer (whose identity we will reveal anon) posed a question from director James Cameron, who asked King who his fantasy guest would be. King replies, "What a list. It would be an endless list. Stalin would be on it. Hitler – you know, evil people make great guests. Because evil people don't think they're evil."

"And you've had some of them," his interviewer says.

The special's guest host and interviewer, by the way, was Donald Trump.

King clearly wasn't a man who used simple questions to open the door to deeper understanding about a person – and this, I think, is where some of the best and braver interviewers borrow from his style of simple, gentle questions and probe more sharply, sometimes messily, and if the subject plays along we're gifted with new insight.

King made it perfectly OK to lead with curiosity and leave space for people to answer questions that seemed too obvious to ask. Look at a fuller version of that exchange with Pudi as an example of this. The segment is called "If You Only Knew" and consist of a series of rapid-fire non-specific questions like, "What was your car?" "Funniest or strangest fan encounter?"

To the question of "Best advice you ever got?" Pudi answers in Polish. He then reveals he likes to rap in Polish. This is precisely the type of quick hit, surface-level interesting hidden talent that thrills people, the small curious question that yields a perspective broadening answer. A better interviewer would have dug a little more into this and probably gotten some incredible stories out of Pudi.

Thanks to King having asked that simple question maybe one day somebody will.