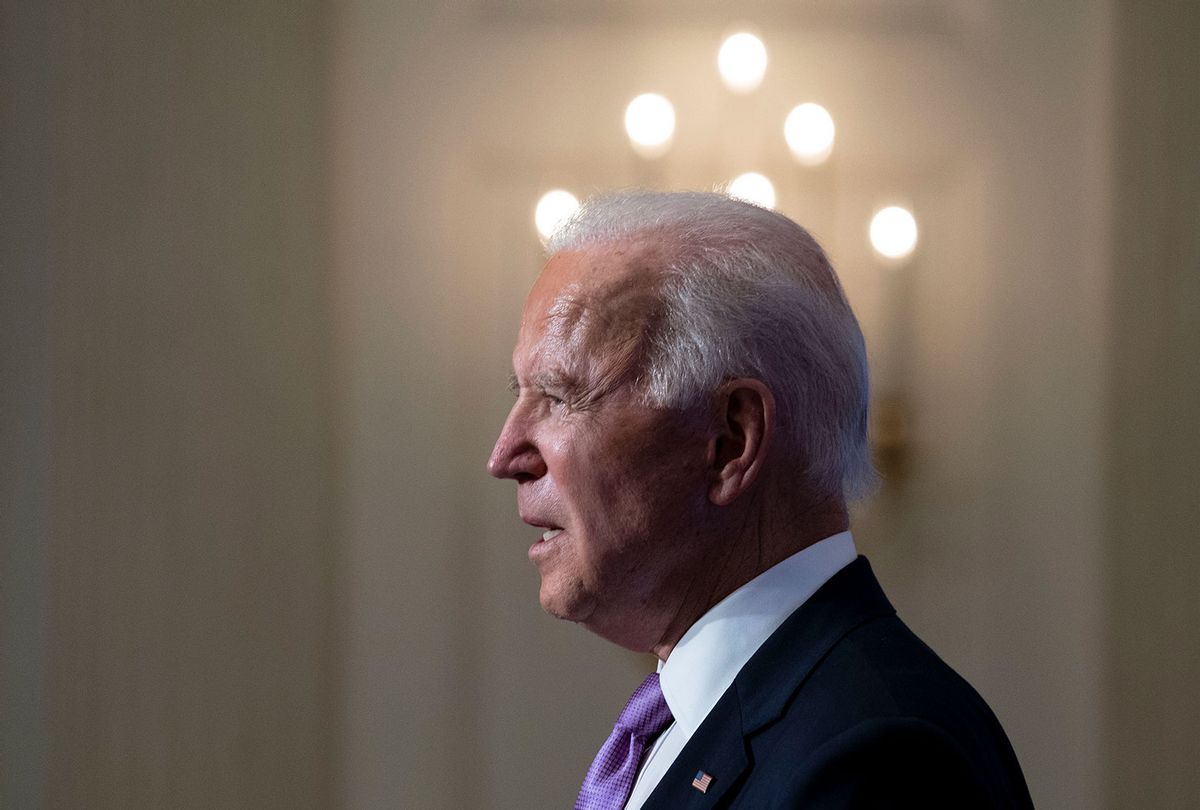 U.S. President Joe Biden speaks about the coronavirus pandemic in the State Dining Room of the White House on January 26, 2021 in Washington, DC. (Doug Mills-Pool/Getty Images)
--

President Joe Biden signed a series of bold executive orders on Wednesday that he reassured the public would help combat climate change, which poses an existential threat to humanity.

The series of executive orders declared that addressing climate change is a national security priority, revoked all new gas and oil leases on public lands and waters, stopped new fossil fuel leases on public lands, fostered development of renewable energy sources, vowed to conserve no less than 30% of federal oceans and lands by 2030 and established new interagency groups and government offices to promote environmental justice, create jobs and clean up pollution.

"It's about coming to the moment to deal with this maximum threat that is with us now, facing us, climate change, with a greater sense of urgency. In my view, we've already waited too long to deal with this climate crisis," Biden said in a statement prior to signing the executive orders. "We can't wait any longer."

He emphasized in his statement, "Environmental justice will be at the center of all we do."

Gina McCarthy, who Biden appointed as the first ever White House National Climate Advisor, told reporters at a press briefing that the United States would announce its Nationally Determined Contribution (NDC) — or each country's commitment to reduce carbon emissions, a stipulation that is required in the Paris Climate Accord which Biden rejoined — prior to a climate summit on Earth Day, April 22.

"We're going to be out of the gate working with the agencies to see what kind of reductions and mitigation opportunities there are," McCarthy told reporters.

The Biden administration also said that it would be willing to take a tougher stance toward China, which is the world's largest emitter of carbon dioxide gas. Special presidential envoy for climate John Kerry told reporters during the briefing that although the United States and China have conflicts on issues like intellectual property theft, "those issues will never be traded for anything that has to do with climate," adding that "President Biden is very, very clear about the need to address the other issues with China. And I know some people have been concerned. Nothing is going to be siphoned off into one area from another."

McCarthy and Kerry were not the only Biden administration officials to discuss China's problem as the world's worst climate change offender. Rhode Island Gov. Gina M. Raimondo, who Biden has nominated as his commerce secretary, told lawmakers during her confirmation hearings on Tuesday that she would both fight China on its unfair trade practices and use the government's power to help address climate change.

"Together, the US and China could basically make major progress into climate change issues and carry along the rest of the world through peer pressure," Dr. Kevin Trenberth, a Distinguished Senior Scientist in the Climate Analysis Section at the National Center for Atmospheric Research at the University Corporation for Atmospheric Research, told Salon by email. "But this requires a unified US approach first. Unless that is clear, China will be hard to change course. China does what is best for China. They are cognizant now of climate change and how it adversely affects China (drought, floods, typhoons etc)."

Biden's executive orders may foreshadow even more assertive action to address climate change, as Senate Majority Leader Chuck Schumer hinted when he told MSNBC's Rachel Maddow on Monday that Biden will also explore using his emergency powers to declare climate change as a national emergency if necessary. Schumer explained that "I think it might be a good idea for President Biden to call a climate emergency," adding that "then he can do many, many things under the emergency powers of the president that wouldn't have to go through — that he could do without legislation."

"This is the boldest climate plan that has ever been put forward by an American president," Dr. Michael E. Mann, a distinguished professor of atmospheric science at Penn State University, told Salon by email. "It is comprehensively addressing every facet of the climate issue, from the need to block new fossil fuel infrastructure, to clean energy stimulus, to leadership in the global community, to addressing climate in matters of security, defense, finance, agriculture, and recognizing the need to help out front line communities and those displaced by the necessary transition away from fossil fuels."

He added that it was "pretty remarkable stuff" and said he hopes "this will convince even the most ardent 'skeptics' that this administration is SERIOUS about climate action."

David Rothschild, a British ecologist and environmentalist, expressed similar views, telling Salon in a private message on Twitter that he is "very encouraged." He added that he has "faith and hope in humanity," arguing that "acknowledging the crisis is the first step" and that policymakers need to create and effectively implement an "ambitious plan" going forward."

"Reducing our pollution is the easiest way but we need to invest in clean energy tech, harvesting energy in all aspects of life," Rothschild argued. "And to recycle on a near 100% rate as we consume more every minute."

Biden's new policies are a stark contrast to those of his predecessor.

During his presidency, Donald Trump pulled America out of the Paris climate accord, ordered the government to stop studying the effects of climate change on the planet, gutted the Environmental Protection Agency (EPA) and rolled back regulations implemented by President Barack Obama to address climate change.

"It is one thing for the Trump administration to decide that more people should be killed from particulate air pollution, because their lives are worth less than the money to be made from loosened regulations," Dr. Ken Caldeira of the Carnegie Department of Global Ecology told Salon by email in 2019. "It is another thing entirely to enter an Orwellian world, in which we pretend that the loosening of regulations will not result in more people dying. Trump complains about fake news, but then to justify his policies, his minions create fake science and then use it to create real policy."

A Biden administration official told Salon that the president and his staffers recognize the importance of making sure that accurate information about the climate change crisis is relayed to the American people.