"The Expanse" shows the dangers of treating extremism as a joke 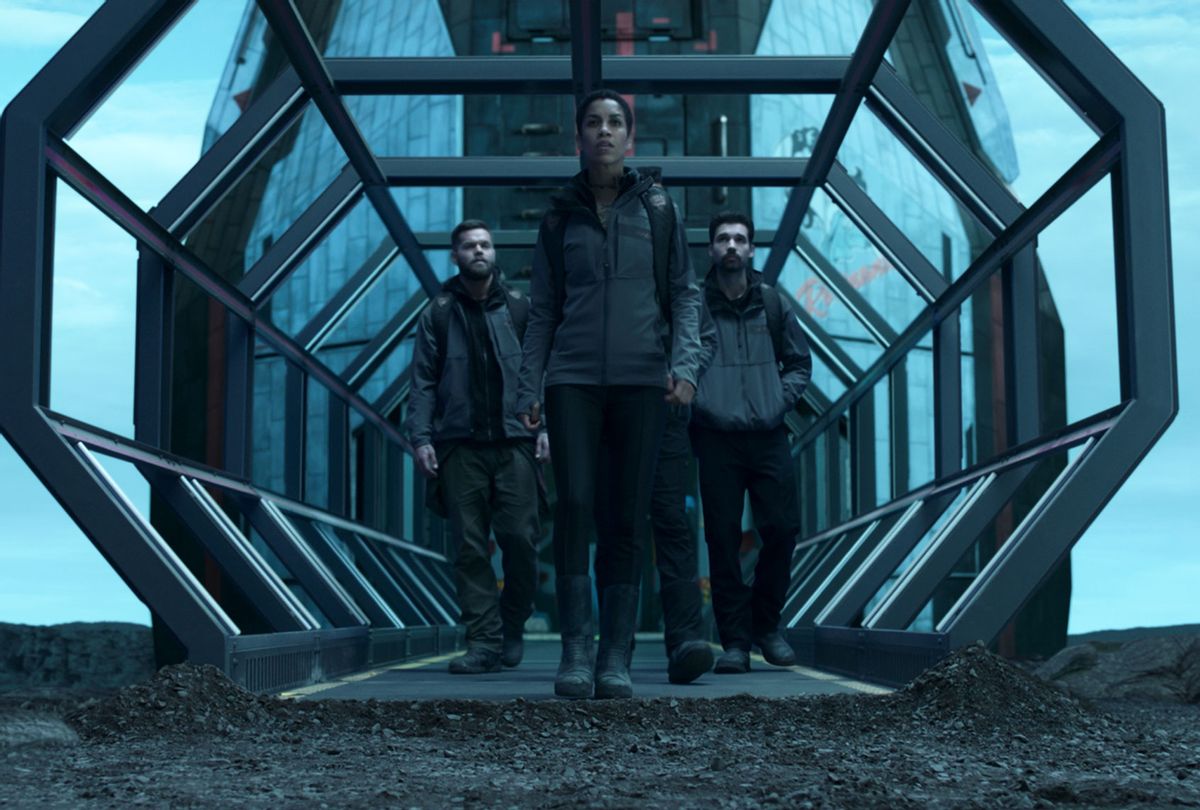 The following contains spoilers from the Season 5 finale of "The Expanse."

Events depicted in Amazon's "The Expanse," which just wrapped its fifth season, take place two centuries in the future when humankind has colonized Mars and cultivated a downtrodden working class in the asteroid belts between Mars, Jupiter and Saturn. Apparently no amount of time diminishes the solid charms of a classic joke setup, because early on in the season an Earth admiral attempts to lighten a deposed politician's dark mood by telling his version of the classic "A, B and C walk into a bar . . ."

This joke stars a Belter, an Earther and a Martian. The Belter orders the finest Martian whiskey from the bartender, and the Martian orders Earther tequila. Both give the same explanation for their choices: "Drinking like my enemy helps me think like my enemy." Before the admiral can get to the punchline they're interrupted by urgent business, which turns out to be a warning about an impending disaster enormous in scale.

Six full episodes transpire before the admiral, Felix Delgado (Michale Irby) gets to the punchline. By that point in the season millions have been slaughtered on Earth, Mars and a Belter colony instigated by sadistic Belter extremist Marco Inaros (Keon Alexander), shifting the solar system's power balance.

The politician, Chrisjen Avasarala (Shohreh Aghdashloo) has been restored to power as the acting Secretary-General of the United Nations after her predecessor orders a military strike against the economically devastated Belter outpost Inaros once called home, leading most of his cabinet to resign.

Neither Delgado nor Avasarala laugh, and in those seconds the Admiral's flippant twinkle melts. "It used to be funnier," he flatly offers.

Simple exchanges like this remind viewers why "The Expanse" is consistently underappreciated in the realm of epic dramas. Here we see two people tasked with serving humanity and seeking peace revealing their arrogance and prejudice by way of a derogatory joke; they are leaders and ostensibly diplomats. To use a familiar and loaded 2021 term, they are the "elites."

But even these supposedly wise leaders are not above ignorant wisecracks about the presumed inferiority of the downtrodden – or, we should say, they didn't used to be. By the time the joke has stopped being funny the Belt has delivered a wallop to the system that threatens to bring the established order to its knees.

Several times, including very recently, I've written about the limited appeal of end-of-the-world dystopias to audiences living in the middle of one, and on the surface it may be tempting to lump "The Expanse" in with other examples of apocalyptic visions. It was never that type of show.

From the beginning "The Expanse" has always extrapolated the probable direction our future would take with an eye on humanity continuing, not ending. In the same ways some hoary, dumb jokes don't really change, neither does humankind's greedy nature and its ages-old habit of optimizing civilization's function to benefit the wealthy and leaving the rest to struggle over scraps. Ever imagine what happens to a society that never quite makes it beyond late capitalism? Watch this show.

And I recommend that you do because "The Expanse" this season served up several disaster movies, a bullet-riddled action thriller and family drama, and it did a spectacular job with each. Each of its 10 episodes is a spectacle that refuses to sacrifice its stunning aesthetics even in the worst of circumstances. This also differentiates "The Expanse" from, say, an endless grind to survive a zombie world or a desperate frozen locomotive.

As terrible as the situation gets for the show's protagonists, the worlds depicted never look anything less than interesting, and the writing gives us a view into humanity's shortsightedness in broad strokes and intensely personal ones.

Human greed and perseverance will always be this show's roiling guts, especially once we know these characters and all they're capable of, for better or for the absolute worst.

Spaceship crews that transcend cultural and political strife are a sci-fi mainstay, but the Rocinante's tight family sticks together because they don't fully trust any government while maintaining connections to each faction through their individual relationships. They've also bonded over their perilously close interactions with the story's X-factor, a sentient phenomenon known as the protomolecule that can wipe out entire colonies. Through the protomolecule the Roci crew also discovers a network of gates to other parts of the universe, some with inhabitable planets and some containing dead space.

Over the show's five seasons the Roci has contended with various factions wanting to use the protomolecule for their own benefit, but only recently Holden and his cohorts believed they had banished it from this system. But where there are zealots there must be world-ending weapons for them to steal.

Strangely enough, the protomolecule is not season's greatest ordeal nor its main strength.

Following a mild restart in the fourth season (the first to stream on Amazon after Syfy dropped the show) showrunner Naren Shankar's decision to temporarily break up the Roci crew to pursue personal missions refreshes the series yet again. Doing so expanded the development of Tipper's Naomi and Chatham's Amos, and enabled the writers to humanize the figures that could have been most easily written off as terrorists.

"The Expanse" cast's performances are powered with the same level of devotion to profundity that the producers give to getting the details of physics and space travel right. It follows that the series would operate with the same steadiness in its shift from a political saga fueled by struggles over resources into a provocative warning about ignoring so-called fringe actors and their passions.

"The Expanse" isn't shy about depicting Inaros as a self-serving, dangerous cult leader, to be clear. But through Naomi, who goes in search of the son she has with Inaros, Filip (Jasai Chase-Owens), we are given a tight shot on how easily abusive personalities can radicalize the disillusioned . . . which is entirely relevant at the moment.

Naomi is never seduced by his message but her son is fully indoctrinated, and through both of their stories we come to understand why and how a figure who begins the season as the system's most wanted man ends it as its most feared. Everything comes back to that punchline and the political arrogance of underestimating a livid underclass. Designate people as a joke for long enough and eventually they'll make it their mission to turn their oppressors into one.

Amos returns to Baltimore, just in time to coincide with the Inaros faction's crippling attack. Earth's dire disarray pushes Amos to use his abilities as a strategist and negotiator instead of relying on brute force, and allows Chatham to spread his dramatic range wider than he has before. He also was part of the underclass. Now he has the Earth's chief executive on speed dial.

Anvar's Alex probably received the least amount of expansion next to Strait's character, but given that most of "The Expanse" makes Holden the center of the story sidelining him in order to beef up Naomi and Amos is excusable.

Alex's deemphasis may have been in the editing, however; the actor was fired in the wake of multiple sexual misconduct allegations brought against him in the summer of 2020. If you didn't know that, his sudden death-by-stroke in the finale may have taken you by surprise.

Nevertheless, the Rocinante crew finishes this season as heroes celebrated by Avasarala as the exemplar of what Inaros hates: an assembly of people pitted against one another by the powers that be, now working together for the common good. "All we have to do now is turn Belter, Martian and Earther into this," she says with a warm smile, adding, "This is how we win."

Genre fiction teaches us that whenever a character delivers a line like this with pure certainty, evil will surely test it – and right on time Inaros responds in another part of space, setting the table for a sixth and final season that looks like it could be an existential battle pitting a pseudo-democracy against fascism.

Ignoring the real-world parallels that may hit too close to home for some people, the painstaking level of intricacy laced through every corner of "The Expanse" could make the prospect of leaping into this series daunting especially in a time when everyone's attention span has been taxed beyond belief.

Then again, right now much of the country is blanketed in snow, and many millions more are slumped into the midwinter doldrums. We crave some element of departure from the world's woe, but prestige habit also dictates that the writing gives us enough realism to hold onto.

"The Expanse" is a journey removed enough from reality to release us from its gravity, but relatable enough to draw us in. If you ever considered taking on the show, it would be tough to come up with a better time than right now.

All five seasons of  "The Expanse" are currently streaming on Amazon Prime.