A would-be terrorist was arrested with a "white privilege card." But that's not funny — it's a dangerous weapon 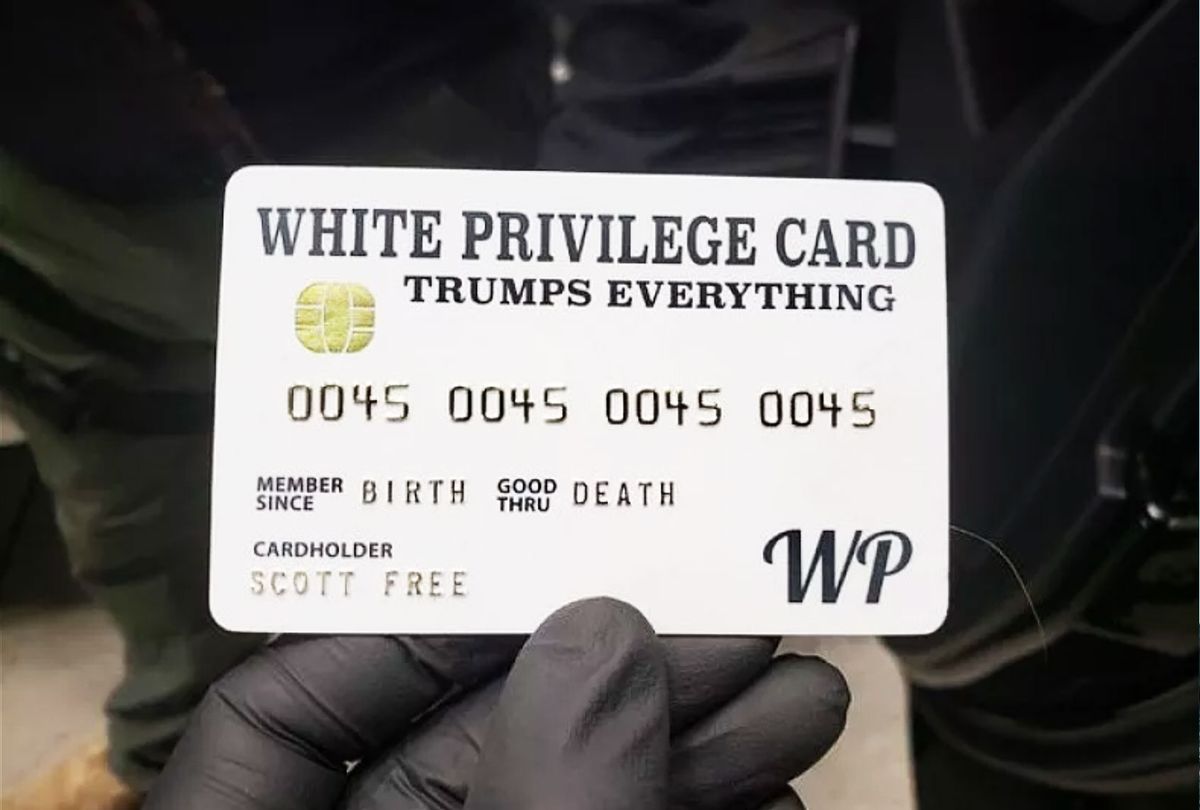 A 'white privilege' mock credit card that was found in the possession of Ian Benjamin Rogers, 43, on January 15, when he was arrested in Napa County, California. Rogers has been charged with the possession of five pipe bombs. (US Department Of Justice)
--

Last week, prosecutors announced charges against a California man who was arrested on Jan. 15 for possession of pipe bombs and other weapons. Ian Rogers was apparently intent on attacking Democrats and other "enemies" of Donald Trump and his movement. Law enforcement also seized as evidence a card from Rogers that read "White Privilege Trumps Everything" and had the number "0045" (Trump was the 45th president) repeatedly listed as its account number.

This apparent murderous plot has, for the most part, already been thrown down the memory hole by the mainstream news media and an American public engaged in "organized forgetting." This is unfortunate, but somewhat understandable.

The Age of Trump has inflicted great trauma on the American people and its elites. The human mind, both collectively and individually, responds to pain with a desire to forget. The post-Trump years will likely be structured by a cycle of amnesia and shock, both at the horrors which will continue in the former president's name and those newly discovered that took place under his regime. Because (white) America is an amnesiac nation there will likely be no true reckoning or justice for the crimes perpetrated by Trump's regime and its followers.

Joe Biden has been president for only three weeks, yet for many Americans that brief time feels like years because the Age of Trump was so horrible.

An earlier article by Salon's Igor Derysh offers these details on Ian Rogers and his alleged crimes:

A California man accused of being a right-wing extremist faces dozens of federal and state charges after he was arrested with a cache of weapons and text messages appearing to threaten Democrats and social networks, according to the FBI.

Ian Rogers, 44, was arrested on weapons charges after local law enforcement and FBI agents found five pipe bombs, bombmaking materials, 49 firearms, and thousands of rounds of ammunition during a raid of his Napa County home and auto repair shop, according to an FBI affidavit filed on Tuesday. Some of the guns appear to have been modified, including one that was intended to look like a Nazi-era machine gun and appears to be "capable of firing fully automatic," the complaint said. Investigators also found a Nazi flag, according to prosecutors.

Rogers admitted that he built the pipe bombs but claimed they were for "entertainment purposes only," the FBI said. But investigators found messages suggesting he planned to "attack Democrats and places associated with Democrats in an effort to ensure Trump remained in office."

"I want to blow up a democrat building bad," he wrote in one text message on Jan. 10, days after the deadly Capitol riot, according to the affidavit. "The democrats need to pay," he wrote in another, "let's see what happens, if nothing does I'm going to war."

"I hope 45 goes to war if he doesn't I will," he said in another message, according to the complaint.

Unfortunately, Rogers is not alone. Numerous other Americans have been radicalized into right-wing extremism and violence by the Age of Trump. Trump's coup attempt, culminating in the Jan. 6 attack on the U.S. Capitol, was but a preview of what experts warn will likely be years of widespread right-wing terrorism and other violence in the United States, likely targeting Democrats, progressives, Muslims, Jews, nonwhite people and others deemed to be "the enemy."

Rogers was armed with bombs and guns and could have inflicted great harm on many people with such an arsenal. But in some ways, the greatest and most lethal weapon in Rogers' possession was his "white privilege card."

Whether or not intended as a "joke" or a real-world meme, that card symbolized the assumption and belief that white people are and should be the most powerful and privileged group in the United States and the world. Such white supremacist ideas have likely killed hundreds of millions of people since the invention of the race concept in the 15th century.

A white privilege card also represents the logic of European and American colonialism and imperialism, ideologies that have manifested in such forms as white settler colonialism, the enslavement of Black people, racial segregation and the genocide of indigenous peoples.

In post-civil rights "colorblind" America, that logic and harm continues in the form of police brutality and thuggery, mass incarceration, environmental racism, poverty and other forms of structural violence that disproportionately impact nonwhite people.

A desperate (and in many ways self-destructive) effort to protect white privilege and white power elected Donald Trump to the presidency in 2016.

What happened next? Donald Trump and his regime reduced the American economy to rubble through willful neglect and intentional sabotage of coronavirus relief efforts. Public health experts predict that at least 500,000 people will ultimately die in the U.S. from the coronavirus pandemic. The real number is likely much higher because of systematic errors in data collection as well as the impact of co-morbidities. The long-term harm to the health of people who have survived COVID will also lead to many deaths in the years and decades to come.

In total, the "white privilege card" elevated Donald Trump to the White House — an outcome that has directly and indirectly led to the preventable deaths of hundreds of thousands of people. A white privilege card also symbolizes and channels what W.E.B. Du Bois described as the "psychological wages" of whiteness. That is the emotional and psychological investment in the fiction that white people are naturally superior, a fiction that in turn leads individual white people to make political and other choices that often cause themselves economic and other types of harm.

Lyndon B. Johnson famously described the psychological wages of whiteness and their role in day-to-day life and politics in memorable terms: "If you can convince the lowest white man he's better than the best colored man, he won't notice you're picking his pocket. Hell, give him somebody to look down on, and he'll empty his pockets for you."

As implied by Johnson, one of the primary reasons why the U.S. does not have a robust social safety net is because of white racism and related anxieties about maintaining social dominance and control over Black and brown people. This is just one of many ways that racism and white supremacy actually injure white people.

Researchers have shown that racism and other forms of discrimination against Black and brown Americans (as well as women) costs the U.S. economy more than a trillion dollars each year. This contributes to severe wealth and income inequality, an outcome that diminishes lifespans throughout society.

Today's neofascist Republican Party has become the world's most dangerous political organization. Maintaining, protecting and expanding systems of white supremacy, white racism and white privilege are its foundational principles, and those of the conservative movement more generally. It is not quite true that Trump-era Republicans reject democracy per se; rather, they want a type of "democracy" that functions as an apartheid state, in which affluent white people have much more power than other Americans — especially those who are Black or brown.

If the Republican Party were fully honest about its core principles and its mission, it would take a cue from Donald Trump's would-be terrorist and hand out "white privilege cards" as tokens of membership.