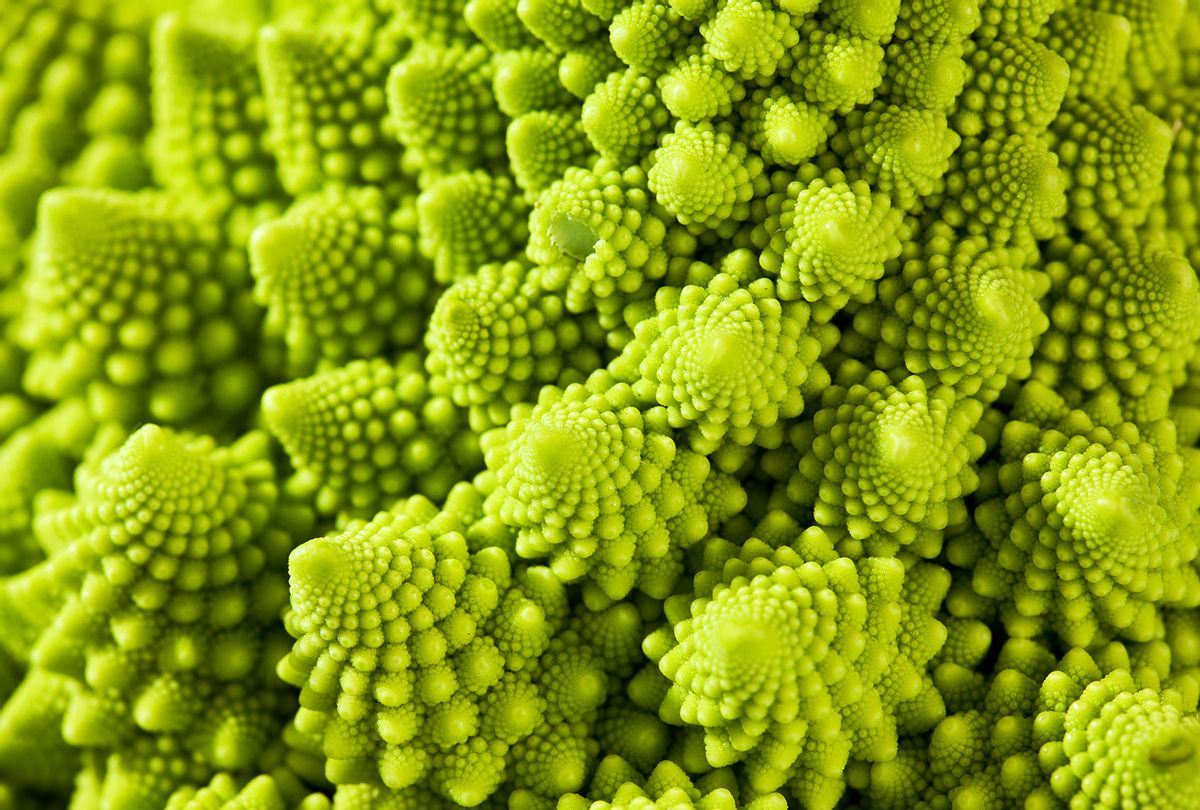 In terms of taste, broccoli is a divisive vegetable. But visually, you would be hard pressed to find someone who doesn't find Romanesco broccoli aesthetically beautiful.

You've probably stopped to gawk at it at the produce aisle before: Romanesco broccoli — or "Romanesco" for short — is a breed of broccoli that looks like a giant green bloom, with flowers in weirdly perfect geometric patterns that self-repeat as you zoom in. It is the nautilus shell of vegetables: a perfect, ever-repeating spiral that resurfaces again and again. As a late fall and winter vegetable, it is found in most grocery stores around the United States this time of year, mesmerizing shoppers with its stunning patterns.

Those patterns are called fractals, and they are key to understanding Romanesco broccoli.

"A fractal is a shape or structure that is the same as itself at different scales," Edmund O. Harriss, mathematics professor at the University of Arkansas, wrote to Salon. "In other words, as you zoom in you see the same (or sometimes related) structure."

In the natural world, plants sometimes approximate these self-repeating structures. Many ferns, for instance, have leaves which exhibit fractal architecture. Pinecones, spiral nautilus shells, and ice crystals all have self-repeating patterns as well.

But among recursive patterns that appear in living beings, Romanesco broccoli is a fractal par excellence, it seems.

"Romanesco is thought of as the quintessential model of fractal architecture in biology," Zachary Stansell, a professor at Cornell University's School of Integrative Plant Science, told Salon by email. "We know that it exhibits a very unusual and recursive growth pattern compared with 'normal' (or Calabrese) broccoli. Almost paradoxically, some of the rules that govern normal broccoli branching and development seem to be 'relaxed' in Romanesco — allowing it to repeat the branching process… repeatedly. This iterative branching pattern corresponds with some interesting math like the Golden Ratio, a common theme in classical architecture."

One of the most ancient mathematical concepts, the Golden Ratio, whose value is around 1.618, is the ratio between two different size objects in which the smaller one is to the larger as the larger one is to the sum of both. As John Edmark, a lecturer at Stanford University's mechanical engineering and design program, told Salon, the Golden Ratio occurs "if you take a line and divide it into two segments so that the ratio of the entire line to the longer segment is the same as the ratio of the longer segment to the shorter segment." Edmark noted that "there is only one ratio that can fulfill that requirement — the Golden Ratio — and its value is approximately 1.618."

The Golden Ratio has a storied history, tracing all the way back to the ancient Greek mathematician Euclid. It has been used by artists, architects, engineers and musicians, incorporated into their respective crafts. Some even believe it can be used to explain beauty and understand how life is designed in nature.

This brings us back to the Romanesco broccoli. The spiral pattern on the broccoli exhibits the golden ratio, in that each small bud that grows outward from the main one has the same size ratio with its predecessor, specifically the Golden Ratio. In other words, the same formula that governs Romanesco broccoli's appearance was exploited by Leonardo Da Vinci and Piet Mondrian in their canvases.

That's the math behind broccoli. But what about the biology? What about Romanesco's genetics makes it so... spirally?

Peculiarly, the reason that Romanesco looks different than its nearly genetically identical cousins — (normal) broccoli and cauliflower — remains something of a genomic mystery.

"To my knowledge, no one has fully proven the genetic control of the patterns seen in Romanesco," Stansell told Salon. "There are some known genes in the 'lab rat' of plants (Arabidopsis thaliana) that seem to cause a somewhat analogous behavior, but the genetic control remains a standing question."

Stansell and Björkman know what they're talking about when it comes to broccoli, as the two scientists published a paper in October on the genetics behind broccoli. They studied broccoli genomes and learned that the iconic plant has retained roughly half of the genetic diversity that existed in the original broccoli cultivated by Italians centuries and centuries ago — information that could be used to change how it tastes going forward.

"Even though modern broccoli is extremely uniform, it retains about half of the genetic diversity found in its Italian ancestors," Björkman explained. "That diversity is valuable for resilience and continued improvement."

He added that he and his co-author, Stansell, "also found parts of the genome (the organism's complete set of genetic instructions) where the genetic diversity is really low. That uniformity is a sign that a gene in that part of the genome is really important for making good broccoli and other versions have been eliminated." This reveals that people who grew broccoli deliberately knew which traits to encourage and which ones to downplay. Interestingly, this happened through farmers breeding the vegetable, long before human beings even understood that genes existed.

The "distinctive flavor" of brassica vegetables, the cabbage and mustard family that broccoli also sits in, relates to a class of compounds called "glucosinolates," Stansell told Salon. "Certain glucosinolates contribute to the spicy or bitter flavors that people love (or detest) in broccoli," he noted.

Stansell also observed that human genetics can play a role in how we understand the relevance of broccoli genetics; some people have genes that make them more sensitive to glucosinolates.

"It's possible to breed brassica vegetables to have less of these bitter compounds, as was done by the Dutch plant breeder Hans van Doorn when breeding Brussels sprouts," Stansell explained. "Greater knowledge of the genetic diversity in broccoli could allow plant breeders to select or cross-pollinate new broccoli varieties with different or even new flavor profiles."

Perhaps, eventually, such genetic knowledge could allow breeders to select for mathematically stunning broccoli, too.