A lesson from Trump's acquittal: Bipartisanship won't save democracy — Democrats must fight the GOP 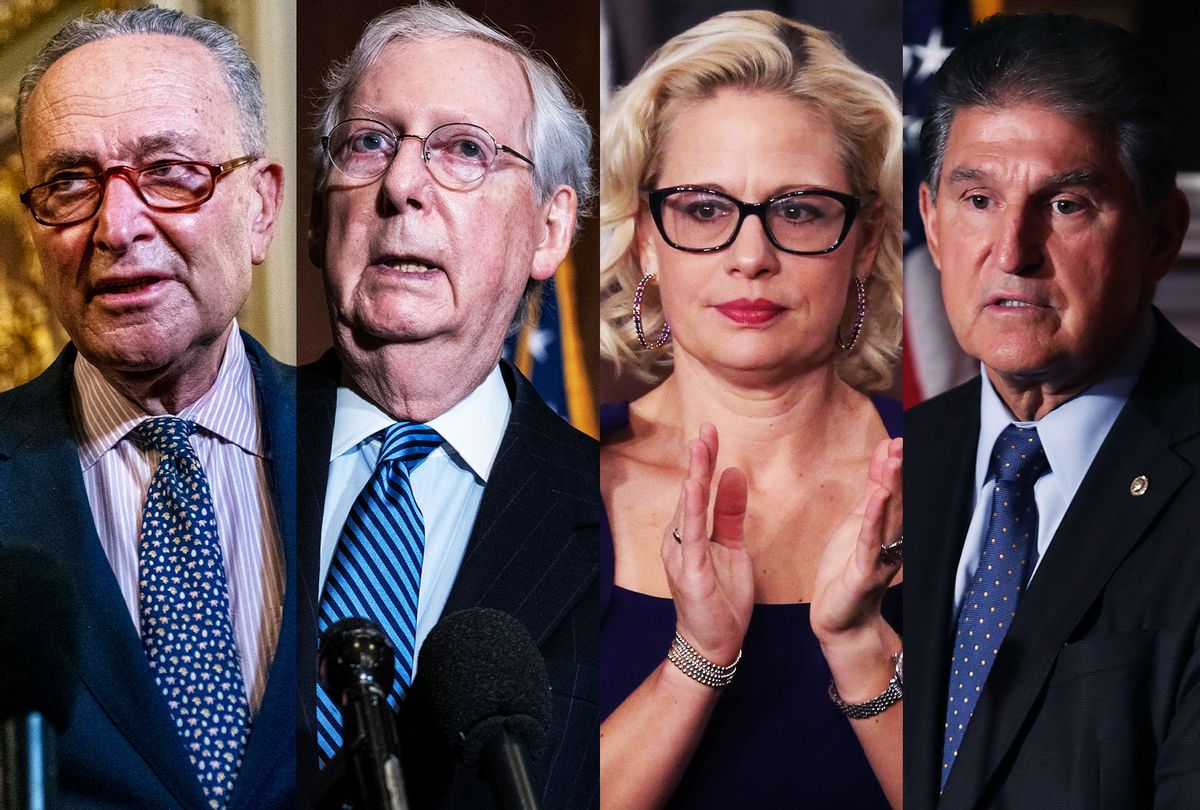 On the last day of the impeachment trial, Democrats fumbled such that it felt a parody of their storied political ineptitude. After the Senate voted to hear from witnesses in Donald Trump's trial for inciting an insurrection, Trump-loyalist Republicans, like Sen. Lindsey Graham of South Carolina, started issuing threats to drag the trial out for months. Even though it would have been easy to call the Republicans' bluff — it's highly unlikely that Republicans would want this embarrassing impeachment to dominate headlines for months — Democratic House managers quickly scrambled to call a mulligan on the 55-45 vote for witnesses, overruling the actual vote in order to cancel any live testimony. Despite Democrats doing a huge favor to Republicans by minimizing the political pain of the trial, however, 43 of 50 Republicans still voted to acquit Trump in the face of his undeniable guilt.

Many progressives erupted in outrage, correctly believing that not only was witness testimony inherently useful for illustrating Trump's guilt to the public but that by dangling out the possibility and then yanking it away, Democrats ensured that the coverage would be muddied by a narrative about their own cowardice, instead of about GOP complicity. (This proved to be true.) But the pushback from other liberals came hard and fast, with those supporting the decision arguing that since the GOP acquittal of Trump was inevitable, there was no point wasting time with witnesses. (Those of us arguing in favor of calling witnesses understand that GOP senators weren't persuadable, to be clear, but believe calling witnesses was about messaging to the voters.) Plus, Democratic defenders argued, the Senate really needs to focus on legislation, if there's any hope of fixing America's problems and turning back the tide of Trumpism.

But it's wrong to believe that the pro-witness side is indifferent to legislation, much less that they're somehow valuing their own desire for impeachment drama over the hard work of passing bills. On the contrary, they are concerned about a repeat of Barack Obama's first term, where Republicans exploited the desire for "bipartisanship" to mire Democrats with go-nowhere "negotiations" designed to run out the clock. Moreover, they're worried that Democrats are easily cowed by Republican threats, and will therefore never get rid of the filibuster that Republicans will use to destroy any meaningful legislation.

In other words, it's because they're so worried about passing bills that pro-witness progressives were so outraged. Caving on the witness question is a scary sign that Democrats have not learned, after all this time, to stand up to Republicans. And there's no chance of passing much meaningful legislation if Democrats don't grow a spine. As pro-witness journalist Brian Beutler of Crooked Media said:

Guess what: they're going to block all this shit anyhow! That's an argument for getting rid of the filibuster, not for agreeing to call witnesses and then immediately caving. https://t.co/7ofcYwr2oc

The grim reality here is that the reason Republicans voted to acquit Trump is not that they are "afraid" of their pro-insurrectionist base, a bit of common Beltway wisdom that allows Republicans off the hook for their own complicity.  It's because most Republican leadership agrees with Trump's anti-democratic goals, even if some, like Senate Minority Leader Mitch McConnell, are uneasy about the violence of Trump's methods.

Using Trump's lies about "election fraud" as cover, Republicans in 28 states have introduced more than 100 bills meant to bar Democratic voters from the polls, usually with restrictions that make it harder for working-class people or people living in racially diverse cities to vote. "You can draw a pretty straight line between the baseless and racist accusations of voter fraud and the kinds of bills we're seeing introduced," explained Hannah Klain, a Brennan Center fellow, who co-authored an analysis of the new bills. In other words, far from being offended by Trump's coup, Republicans are exploiting it to justify further efforts to gut democracy.

"Democrats must accept the full implications of the GOP's ongoing and intensifying radicalization," Greg Sargent of the Washington Post wrote Saturday. He points to "the House and Senate bills that would expand voting rights" and "place limits on counter-majoritarian tactics such as voter suppression and gerrymandering" as a way to fight back against the Trump-emboldened Republican party's escalating war on democracy.

The bills are good. However, Republicans will obstruct the bills in the same way they obstructed impeachment trial witnesses, by making threats and laying guilt trips on Democrats to prevent Democrats from nuking the filibuster. Despite their feints about "bipartisanship" and "unity", Republicans will turn around and cram through every law they can, first on a state level and then federally when they regain power, to prevent Democrats from winning free and fair elections. This may, in fact, be the very last chance Democrats have of having enough power to save democracy, since Republicans are moving swiftly to take it away.

What's frustrating is that none of this has to happen. Democrats have enough power at this moment to save democracy, pass necessary legislation, and otherwise reverse course rather than let the country be remade in Trump's image. They just have to admit that Republicans are irredeemable and do what it takes to go around them. While the coronavirus relief bill can pass with a 51-50 vote through budget reconciliation, the bills that are most needed to pull the country out of a nosedive will be forever blocked by Republicans, unless Democrats suck it up and get rid of the filibuster. Yes, even if it hurts Republican feelings and causes high-pitched whining on "Meet the Press".

Prior to the impeachment trial, there were some heartening signs that Democrats had finally learned the lesson of 2009, which is that negotiating with Republicans is a fool's game. Senate Majority Leader Chuck Schumer was making reassuring noises to reporters about how their "North Star has to be the legislation itself," and insisting that they were taking the filibuster-nuking option seriously. The Democratic holdouts were reported to be Sen. Joe Manchin of West Virginia and Sen. Kyrsten Sinema of Arizona, who were still stuck on the idea of "bipartisanship" and unwilling to accept that Republicans who are complicit with a violent insurrection aren't the kind of people you can work with on bills. But the hope was that Democratic leadership, with this newfound understanding of political realities, would be able to push Manchin and Sinema in the right direction.

It should be understandable, then, that progressives are terrified, seeing Democrats cave on something as simple as calling witnesses at a trial. It was the first big test of Democrat spine strength, and they failed in a spectacularly embarrassing way. If they can't keep it together on something as simple as witness testimony, how on earth will Democrats be able to withstand Republicans making similar threats to protect the filibuster?

Democrats failed their first big test. They cannot afford to fail anymore. It's crucial for democracy, but also to save their own skins. As Ezra Klein wrote last month in the New York Times, Democrats only have "[t]wo years to prove that the American political system can work." If they fail — which will happen if they don't start standing up to Republicans, the Democratic voting base will get disillusioned and voting rates will drop again. Republicans will then seize power again. Next time Republicans are in charge, they will not hesitate to ram through their anti-democratic agenda and make sure Democrats never have a chance at the brass ring again. That's because Republicans, unlike Democrats, aren't worried about "bipartisanship" or fearful of pushback from their political opponents.

Courage is not a finite resource that runs out if you use it too much. Courage is a muscle that needs to be exercised. Hopefully it's not too late for Democrats to start strengthening their resolve, but they must get cracking. The time to stiffen spines and save democracy is swiftly running out.