Republicans who claim they want to "move on" are lying, since the best way to do that is bar Trump from running 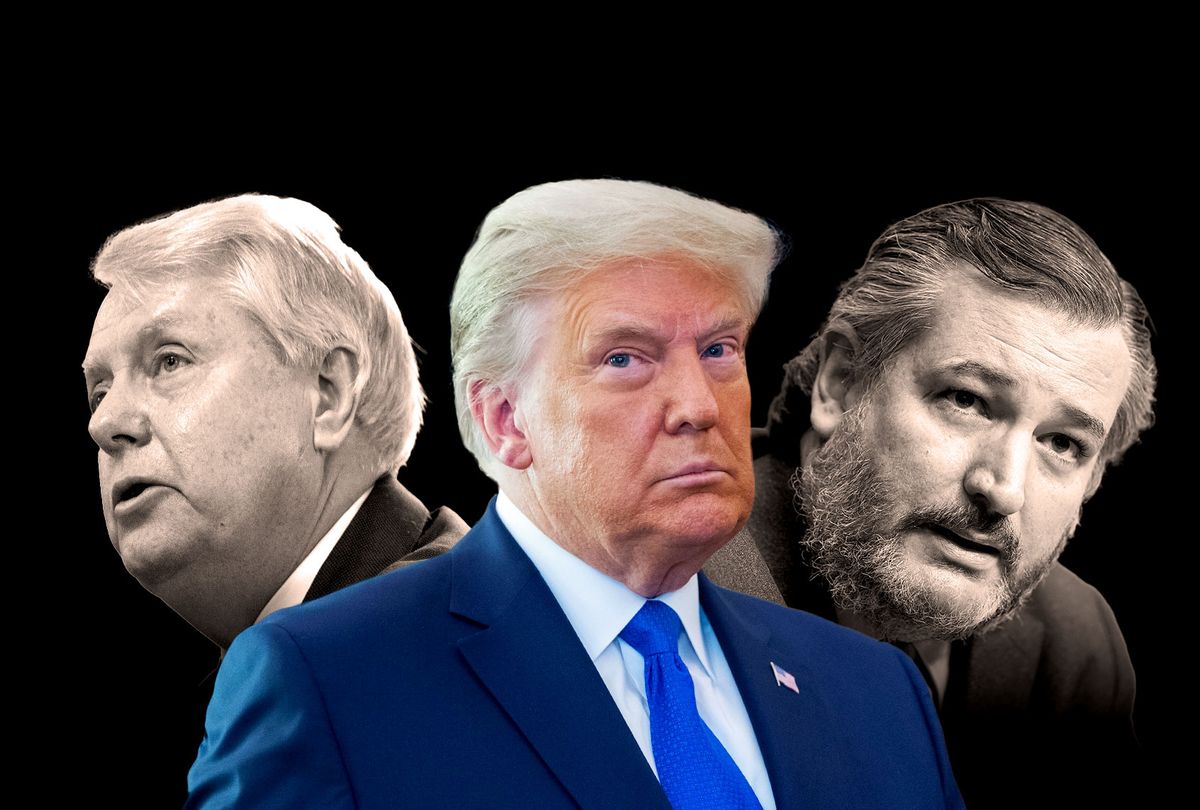 'Tis the night before his second impeachment trial, and all through the Senate, cowardly Republicans are still grasping for some way to let Donald Trump off the hook while not looking complicit in his attempt to violently overthrow the government by sending a fascist crowd to storm the Capitol. (Hint: It's impossible.) So Republicans are reaching for their most potent weapon in the battle to convince the D.C. cocktail party circuit that they're still respectable statesmen: the welcoming arms of Politico, the beltway media outlet always willing to lend a sympathetic ear to pathetic excuses and amplify the silliest of GOP spin in the name of neutrality.

"Where Democrats and Republicans agree on Trump," read a Monday morning headline at Politico. "Both parties want to be rid of him. They just differ on the means."

Even without reading the full piece, one can tell this is hoary nonsense, as even the conventional wisdom holds that Republicans always make it a point to disagree with Democrats, even on basic questions of fact. "Always be 'triggering' the liberals" has eclipsed any actual ideology as their main organizing principle. Still, we here at Salon buck the trends popularized by social media and make a point to actually read an article we deign to comment on. In this case, however, it does not improve the situation.

"Donald Trump's second impeachment trial in as many years has Democrats and Republicans in rare agreement: Most senators want to get it over with, and they want the former president to go away," writes Andrew Desiderio.

One thing is true: Senate Republicans would like the D.C. press to believe they're eager to move past Trump.

But they do not actually want to move past Trump. We know this for a very simple reason: Senate Republicans refuse to do the one thing that would put Trump in the rearview mirror, which is to convict him in the upcoming impeachment trial. Convicting Trump would bar him from ever running for office again. That's as close to a clean slate as Republicans will ever get, even though they don't deserve it. Taking away that ability from Trump de-fangs him. Without the threat of running for office, he can't make good on his threat to start a third party — or won't, as Trump doesn't do anything that isn't centered on himself and his ego. Without the ability to run for office, the playing field opens up for all those other Republicans with dreams of running for president in 2024.

So why won't they do it?

Here is the excuse that was given to Politico: "Republicans, particularly those nervous about Trump's continued stranglehold on the GOP, just don't want to poke the bear." As an anonymous GOP senator told Desiderio, "If he were to be convicted, there would be an uproar among his supporters. And it would probably energize them."

This senator supposedly wanted to remain anonymous "to candidly address the internal party dynamic." Likelier, they just don't want to sign their name to such a stupid argument. After all, who cares if Trump's biggest fans are "energized"? What can they get energized around, if Trump can't run for office? Tweeting abuse at feminists? Making more dumb costumes to wear at their mask-free fascist getdowns? Whining on family Zoom calls about Black athletes taking a knee?

We know one thing they can't get energized around if Trump is convicted: Another Trump run for the White House. Because that ain't happening if he's legally barred from office — hence one of the main points of an impeachment trial.

It's true Trump's fans could have another violent revolt — though it would be harder with so many of the most fanatical in jail — but again, this underscores the idiocy of this argument. Trump is a socipathic monster whose fan base rejects democracy and is all ginned up on violent rhetoric. Giving Trump and his followers what they want is a terrible idea. What actually needs to happen is for Trump to face consequences, which is the only thing that history shows tends to slow him down.

"I think he's going to be a viable leader of the Republican Party," Republican Sen. Lindsey Graham of South Carolina said of Trump to Politico. "He's very popular. And he's going to get acquitted."

Graham is leaning heavily on the passive voice as if he and his fellow Senate Republicans are merely conduits for the will of Trump's base. But Trump's popularity and future as a Republican leader depends on that acquittal. Without it, he's nothing — even to his own base.

I've said it before, but it's worth repeating: Trump's base is not here for Trump. There really aren't millions of Americans whose purest political desire lies in a short-fingered wannabe mafioso clad in a fake tan and an ill-fitting suit. What they like about Trump is that he's a naked racist and has access to power. Without the latter, Trump is little more than another flavor of David Duke, a washed-up bigot, except a billion dollars in debt and living in a dilapidated and overpriced country club. Trump isn't even a very good pundit. His followers have Tucker Carlson and Rush Limbaugh, if they want people expressing the same ideas but with a little more talent and flair.

If Trump doesn't provide an avenue to power for his followers, they will find some other leader who speaks to their white supremacist yearnings. And we, as a nation, will have a whole new set of problems, but at least they won't be Trump-shaped problems.

Don't let Senate Republicans fool you with these pantomimes of powerlessness in the face of the almighty "base." They have the power to turn Trump's already dimming light completely off. The man isn't a wizard. He's not even a successful businessman. His coup failed. He is on the precipice of total irrelevance, and only needs the gentlest of pushes to fall into the abyss, reduced to shilling fake cancer cures on his email list.

No, the reason Republicans don't end Trump's political relevance here and now is because they don't want to. They, not the voters, are the ones who can't quit Trump, even though Trump's insurrection directly threatened the lives of congressional Republicans along with their Democratic colleagues. After all, Trump's efforts to simply overturn democracy were simply a bolder and more direct version of the years of voter suppression Republicans have engaged in. Republicans can't quite bring themselves to punish Trump for inciting an insurrection because, even if they can't admit it to Politico reporters, they support his actions and are only making excuses because he failed. Anything else they say is just a cover-up for their complicity.