“We did not send him there to do the right thing": Republicans censured for voting to convict Trump 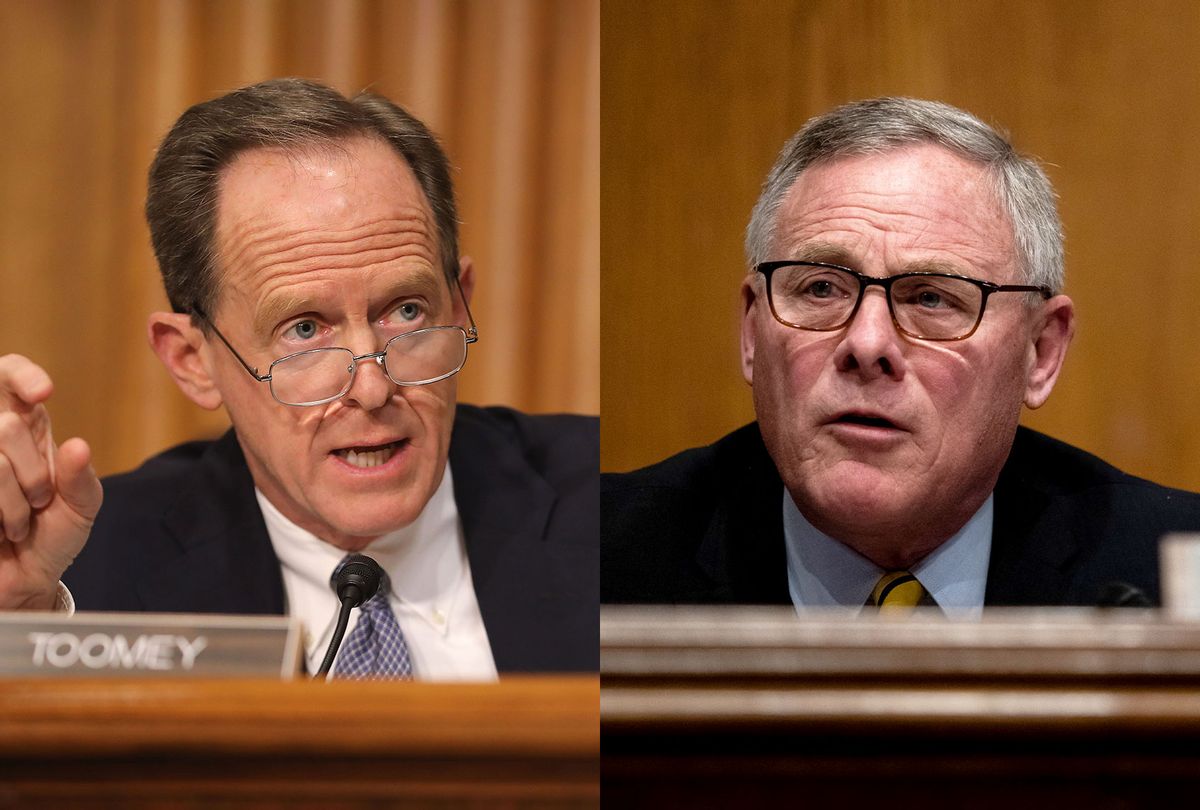 Nearly every Republican senator who voted to convict former President Donald Trump is facing censure from their state parties, underscoring the twice-impeached former president's ongoing hold over the GOP.

Seven Republican senators joined with all 50 members of the Democratic caucus in the unsuccessful 57-43 vote last weekend, but Sen. Mitt Romney of Utah — whose distaste for Trump is nothing new — appears to be the lone Republican not facing censure from his state's Republican Party. The public rebukes highlight the party's loyalty to the former president even after Senate Republican Leader Mitch McConnell, R-Ky., declared Trump "practically and morally responsible" for inciting a mob of his supporters to hunt lawmakers through the halls of Congress, killing five people and injuring dozens of others.

Sen. Richard Burr, R-N.C., became the latest Republican to be censured on Monday as the North Carolina GOP voted unanimously to rebuke the retiring senator over his "guilty" vote.

"We felt it was important for the party to make a statement that we disagree with the vote," North Carolina Republican chairman Michael Whatley told the Charlotte News & Observer. "The overwhelming sentiment was disapproval of the senator's vote."

Burr countered that it was a "truly sad day" for the state's Republicans.

"My party's leadership has chosen loyalty to one man over the core principles of the Republican Party and the founders of our great nation," he said in a statement.

Burr, who had previously voted twice that the trial was unconstitutional, ultimately concluded that Trump was "guilty of inciting an insurrection against a coequal branch of government."

Sen. Lindsey Graham, R-S.C., a close Trump ally, cited Burr's vote in an interview with Fox News over the weekend to claim that Trump daughter-in-law Lara Trump is the "biggest winner" from the impeachment trial because it may help her possible 2022 Senate campaign in North Carolina. Burr announced he would not seek re-election after stepping down as the head of the Senate Intelligence Committee amid scrutiny into stock trades he made after receiving private briefings on the coronavirus pandemic early in the outbreak.

Toomey ripped into Trump ahead of his vote for the ex-president's "dishonest, systemic" effort to push false claims about the election.

"He urged the mob to march on the Capitol for the explicit purpose of preventing Congress and the vice president from formally certifying the results of the presidential election," he said.

Sen. Lisa Murkowski, R-Alaska, also faces a potential rebuke from the state's GOP after Republicans in more than a half-dozen state districts voted to censure her over the vote. The Alaska Republican central committee does not meet until mid-March. Murkowski is the only Republican who voted to convict Trump who will face re-election next year. Alaska politics have an ornery streak — Murkowski herself was once elected as a write-in candidate — but Trump carried the state by double digits.

"If I can't say what I believe that our president should stand for, then why should I ask Alaskans to stand with me?" she told Politico. "This was consequential on many levels, but I cannot allow the significance of my vote to be devalued by whether or not I feel that this is helpful for my political ambitions."

The Maine Republican Party is also discussing a censure for longtime Sen. Susan Collins, who was easily re-elected last November in what was expected to be a close race. Maine GOP chair Demi Kouzounas told party members over the weekend "to be prepared for an emergency state committee meeting in the near future" to discuss Collins' vote, according to the Bangor Daily News.

Collins defended her vote, arguing that the Capitol riot "was the culmination of a steady stream of provocations by President Trump."

"My vote in this trial stems from my own duty to defend the Constitution of the United States," she said. "The abuse of power and betrayal of his oath by President Trump meet the constitutional standard of high crimes and misdemeanors."

The Nebraska GOP is also planning to vote on a censure motion in response to Sen. Ben Sasse's guilty vote. Censure has already been approved by some county Republican parties. Sasse ripped the party in response to reports about the vote.

"Let's be clear: The anger in this state party has never been about me violating principle or abandoning conservative policy — I'm one of the most conservative voters in the Senate — the anger's always been simply about me not bending the knee to one guy," he said in a video. He added, "Let's be clear about why this is happening: It's because I still believe — as you used to — that politics isn't about the weird worship of one dude."

The Louisiana GOP voted to censure Sen. Bill Cassidy on the same day as his guilty vote, condemning his decision "in the strongest possible terms." Cassidy, who was re-elected last year, defended his vote on Saturday.

"Our Constitution and our country is more important than any one person," he said in a video posted to Twitter. "I voted to convict President Trump because he is guilty."

The Wyoming GOP has also voted to censure Rep. Liz Cheney, R-Wyo., in response to her vote to impeach Trump. Cheney later survived a push by Trump loyalists to remove her from her House leadership position.

A petition has also circulated in Utah to call for the state party to censure Romney, who last year became the first senator to vote to remove a sitting president of his own party during Trump's first impeachment trial. But Utah GOP chairman Derek Brown said the party has no plans to rebuke the senator.

The party said in a statement that the state's senators experienced the Capitol riot firsthand and Romney ultimately voted differently than fellow Utah Sen. Mike Lee.

"Disagreement is natural and healthy in a party that is based on principles — not on persona," the statement said. "We look neither to the past, nor to be punitive."

Though most of the Republican senators who voted to convict Trump are insulated from near-term primary challenges, they do not appear concerned about Trump's plans to wage a campaign against any and all Republicans who he feels betrayed him.

"It was a bipartisan vote. It was the biggest bipartisan vote there ever was," Toomey told CNN. "And a majority of senators believed that he was guilty. Not the two-thirds necessary to actually convict by our constitutional standards, but that is an extremely powerful rebuke. And that doesn't go away. And the American people are aware of what he did."