In Netflix's stirring "Amend," stars anguish over the injustices that led to the 14th Amendment 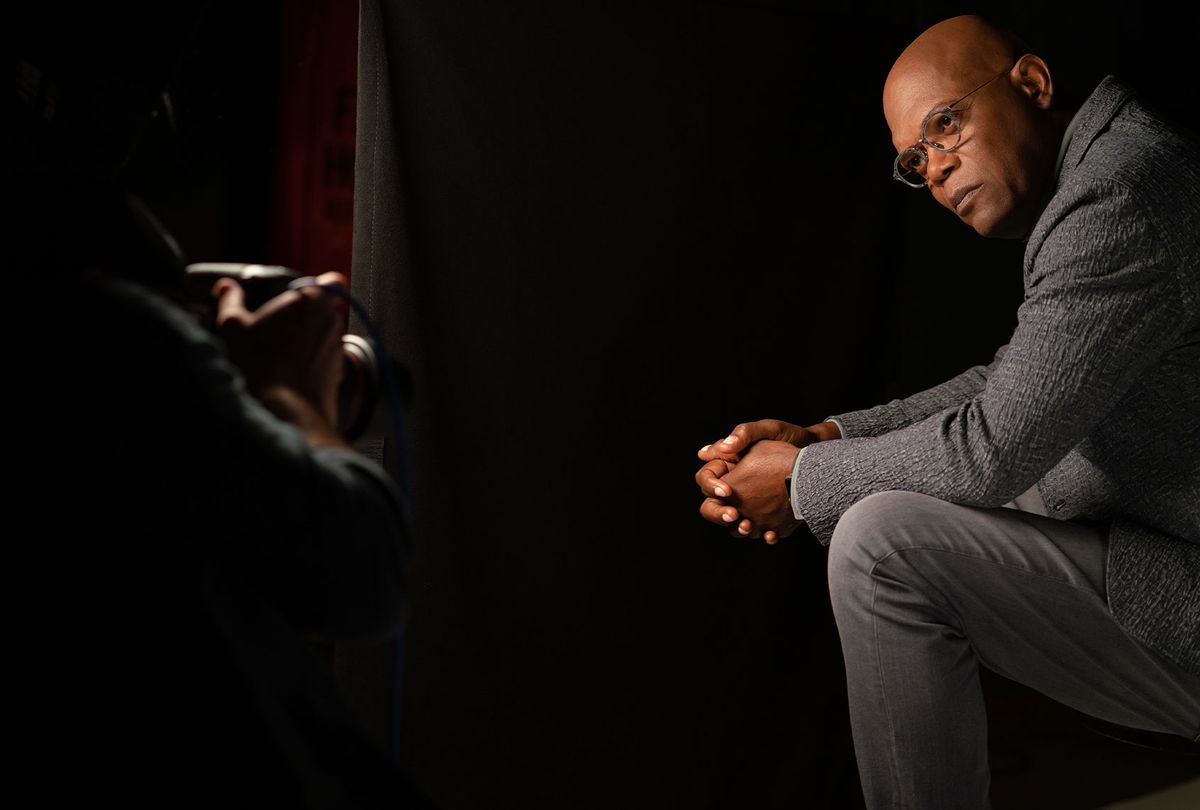 Samuel L. Jackson on the set of "Amend: The Fight for America" (Joshua Kulic/Netflix)
--

"Amend: The Fight for America" mounts a fascinating defense for the power of celebrity casting in documentaries. This isn't the primary aim of the six-part series, mind you. But if your aim is to familiarize the public with the essential Americanness of the 14th Amendment, having the A-list actor they used to call Mr. July as the face of that effort is a smart way to hook the otherwise disinterested.

Will Smith, the executive producer and co-host along with Larry Wilmore, knows what the people are watching. What matters beyond that is how they're using their powers of fame here which, believe it or not, isn't to serve their own sense of righteousness.

Here they and series creators Robe Imbriano and Tom Yellin call upon a small solar system's worth of Hollywood talent to use the fame in service of history, stirring our emotions as we witness how Americans fought to fulfill the 14th Amendment's promise of liberty and equal protection for all – and just as often, how and why their fellow Americans fought against them.

We don't just hear famous voices, we see them become the figures they're representing even as they remain themselves.

It is one thing for historians to break down all the civil rights victories won through the hardest of struggles over decades of sacrifice, terrorism and death. It's something altogether more complex to bring all of that alive in a thoughtful way and make it speak to who and where the TV audience happens to be now. "Amend" achieves this by polishing history with high entertainment value.

"Amend" is also right on time, arriving as legal scholars and others advocate Congress to enact legislation that would hold Donald Trump accountable under Section 3 of the 14th Amendment. This clause bars from office anyone who has taken an oath of uphold the Constitution who is found to have "engaged in insurrection or rebellion against the same, or given aid or comfort to the enemies thereof."

The white mob that rioted at the Capitol on Jan. 6, and the many people who support them from a distance, are all too happy to quote their First and Second Amendment rights in defending the indefensible. These are precisely the folks who need to watch "Amend." They won't.

For the curious who want to understand but are also easily bored, the star power, the agile editing between narration and recitations of speeches and writings from presidents, congressmen, civil rights leaders, abolitionists, journalists and every kind of rabble-rouser you can think of, may be exactly what they need to engage with the subject.

Even this is a benign sort of trickery since the true heavy hitters in "Amend" are its historians and thought leaders: Columbia University professor Eric Foner, a top expert on the Civil War and Reconstruction; legal scholar and NAACP Legal Defense Fund President Sherrilyn Ifill ; UCLA professor Kimberlé Crenshaw; and activist and columnist Brittany Packnett Cunningham are just a few of the experts featured here.

Provided you're an avid and regular viewer of PBS documentaries these folks aren't strangers to you. A few of them are featured in Henry Louis Gates Jr.'s latest four-parter "The Black Church," in fact. But "Amend" assumes you don't watch public television non-scripted anything even if the words "a film by Ken Burns" is attached – but only because those films hew to a format that hasn't changed much over the decades.

Part of that classic presentation, alongside the woodcut illustrations, lithographs and black and white photo slide show, is the disembodied celebrity voice narration. Every top actor wishing to establish he or she is more than a face lends their imprimatur to documentaries by narrating the best of them. In turn, filmmakers promote their participation in an effort to get us to pay attention where we otherwise wouldn't. (Would anyone give a flatulent toot about Dr. Horatio Nelson Jackson's first cross country car trip in 1903 if Tom Hanks hadn't signed on to narrate Burns' ode to that low-interest trivia point?)

Most of the time we only hear Hanks voice in "Horatio's Drive," just as we only hear Peter Wolf, Keith David, Jeff Daniels and tens upon tens of other VIPs in countless looks at history.

"Amend" invites the likes of Joseph Gordon-Levitt, Mahershala Ali, Samira Wiley, Yara Shahidi, Samuel L. Jackson, Diane Lane, Laverne Cox, Randall Park and Pedro Pascal to be seen. In turn they become President Andrew Johnson, Frederick Douglass, Ida B. Wells and so many others, bringing alive their intolerance, their hope, their frustrations and yearning that colored their experience of America.

This works because they are invested in enshrining the philosophies lived by these long-gone figures within their skin, not merely reading their testimonials. One of the most potent moments in "Amend" trains the camera on Wiley as she stares down, fuming as one imagines Wells would have, while Harvard historian Khalil Gibran Muhammad talks about a White mob burning her printing press and driving from her home in Memphis. Wiley doesn't say a word here. She doesn't need to.

One of the main blessings of Smith and Wilmore's approach is their dedication to breaking down dusty declarations in terms that the average person can understand and tossing in their own emotional reaction. And they make clear that much of the history we know has been rewritten and edited to serve the reigning power structure's political and social desires.

This also means some of deities of American history don't come off as enlightened as school textbook authors have laundered them to be. Many of us know some of this, such as Abraham Lincoln's desire to toss aside newly freed Black people as a cost of reuniting the North and the South. Watching and hearing Pascal silkily intone Lincoln's own racist words of appeasement might feel like a slap in the face nevertheless.

This creative decision is one among many that makes "Amend" nimble, consumable and appropriately paced for broad consumption, and it is utilized alongside several other inventive editing choices that hit home the frightening truth of history repeating. One such moment is an animated sequence illustrating a white mob terrorizing Black people in the post-Reconstruction era as audio from 2017's deadly Unite the Right Rally plays behind it.

Some adherents to the classic documentary may viewer this as cheapening the genre. The counter to that is to ask whether they want to appeal to viewers who would rather be entertained as opposed to educated and more importantly, whether they want those people to invest in understanding a Constitutional amendment directly responsible for their rights as a citizen.

Besides, the celebrity roll call is merely the Trojan Horse here. By the time we reach the final hour, "Love" the actors cease being the stars of "Amend." That'll hit you the moment Johns Hopkins University professor Martha Jones explains what Loving v. Virginia made possible not for her but for her parents, who endured extraordinary persecution until the case moved the Supreme Court to legalize interracial marriage. Jones tears up as she's talking and has to pause, annoyed with herself for letting her feelings overcome her as the camera is rolling.  She reminds us that all the fame and acting in the world can't bring the legal documents written by dead people to life. Only those of us living the benefits fought for and won by those insisting America lives up what those decisions and declarations promise can honestly do that.

"Amend: The Fight For America" is currently streaming on Netflix.