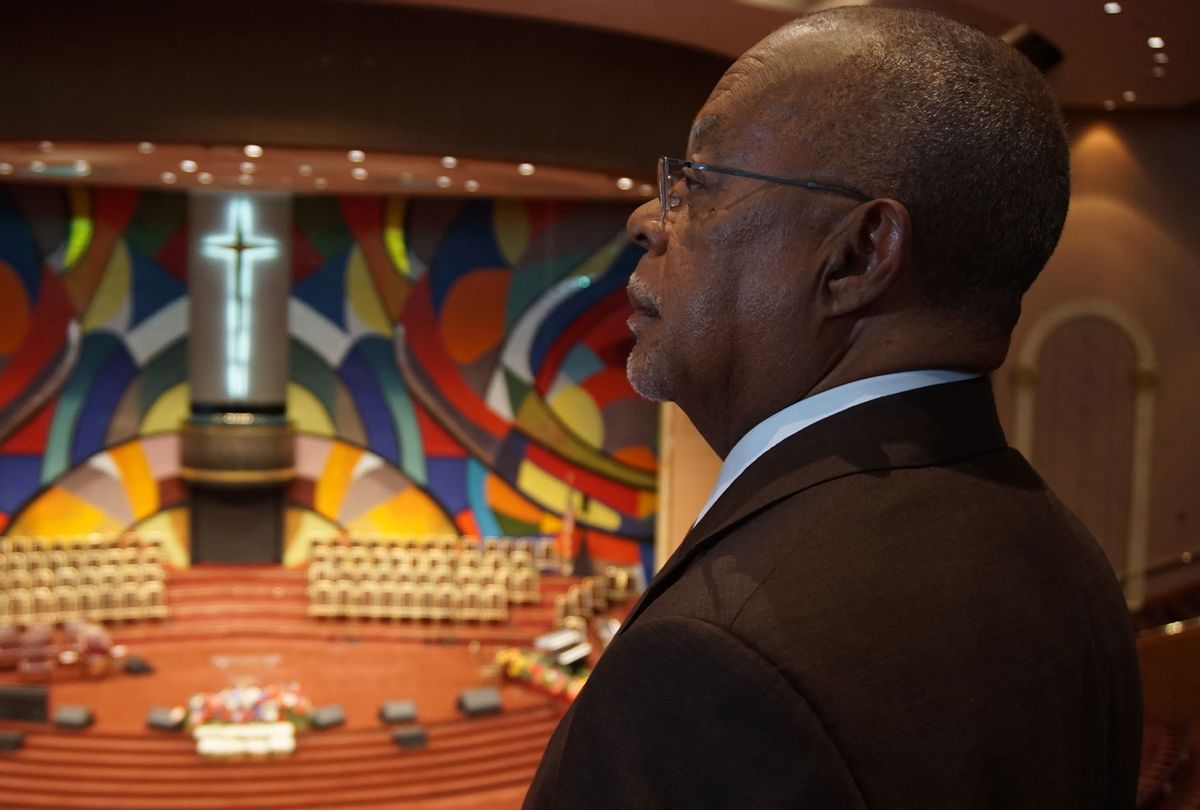 "The Black Church: This Is Our Story, This Is Our Song" opens with a gospel hymn sung by a familiar voice. . .  that of Dr. Henry Louis Gates Jr., its creator, host and narrator. Gates has fine pitch, and I don't believe wouldn't be insulted by the observation that his stylings pale next to that of Jennifer Hudson, one of Gates' interviewees, or executive producer John Legend, who closes the first night with a tender melody.

But Gates isn't singing to showcase some hidden talent. He's demonstrating the democratizing nature of Black religious music, song steeped in cultural tradition and meaning. By the end of this two-night, four-part special we fully understand his editorial choice to begin this work with his song, that it is meant to evoke the lyric "lift every voice and sing."

Gates believes that the latest chapter in his ever-expanding study of the Black American experience may be his most important. Immediately you can sense what a personal experience it is for him, but he also makes the viewer part of that by tying American history to the evolution of the Black church.

"The Black Church" is a celebratory tour of American history, examining the regional contributions to the larger culture of worship, and the churches themselves. Some of my favorite moments in the documentary series are the pensive views inside churches across the country interspersed throughout, with the camera work ensuring that even the most modest praise houses glow.

In this way Gates presents individual churches as distinct personalities evocative of the community history from which they sprang. If there is a designated star among them it is Charleston, South Carolina's "Mother Emanuel" African Methodist Episcopal Church.

Gates speaks of Mother Emanuel with awe, citing that the church was rebuilt by the son of abolitionist and African Methodist Episcopal co-founder Denmark Vesey, after Vesey was murdered and the original church was burned down by a white mob.

Early in "The Black Church" he points out that the building sits in a place of pride on a street named after former vice president John C. Calhoun, a staunch defender of slavery. These grace notes lends themselves to helping us absorb the church's meaning as symbol of defiance and resilience.

We remember it acutely when the documentary inevitably arrives at 2015, when a white supremacist murdered nine people engaging in a Bible study.

Gates lays bare his intent to dig into our souls with "The Black Church" even as he follows the structure of a standard PBS non-fiction film, peppering us with academic commentary and input by significant artists and celebrities. In one moment we're listening to a minister thoughtfully explain the part his church plays in community life, and in the next we're listening to Oprah rave about the preaching talents of The Potter's House's pastor T.D. Jakes.

"Sometimes I will just get on my plane and fly to Dallas to hear those sermons!" she declares with signature Oprah enthusiasm.

Such celebrity testimonials are on brand for Gates, and there are quite a few of them; just as one can't imagine an examination of the Black church without Oprah, one probably knows to expect Al Sharpton to have his say, which he does.

Gates provides a clear view of Martin Luther King Jr.'s efforts on behalf of the working class, scrubbing some of the popular whitewash off of its legacy to remind viewers of the substance behind the dream. The doc similarly reminds viewers that Malcolm X was much closer to King's philosophical outlook near the end of his life, and walks us through Jesse Jackson's political heyday.

He also talks to Jakes, eliding references to the pastor's past homophobic statements in the process. But he also spends time with transformational religious figures such as Rev. Dr. William J. Barber of The Poor People's campaign and Trinity United Church of Christ pastor emeritus Rev. Jeremiah Wright.

Barber is a recognizable figure to many, having emerged during the Trump administration as one of the leading figures of non-violent progressive resistance during the Trump years. Wright, however, is largely remembered as a bête noire owing to an old inflammatory sermon that was unearthed and made the rounds in the run-up to the 2008 presidential election.

Gates' conversation with him takes us beyond the fiery soundbites to delve into the influence Black liberation theology had in revitalized the church after the Civil Rights movement and explains the basis of Wright's influence upon former President Barack Obama's oratory style and moral philosophy.

Many of the subjects covered in "The Black Church" are common knowledge, especially at this time of widespread protests about economic inequality and regular coverage of voter suppression. The church has always been the political center of Black life and key to attaining and expanding the right to vote.

It's still useful to be reminded of the role the church played in the abolitionist movement or of its function as the original educational system for emancipated Black people, giving rise to Historical Black Colleges and Universities.

The Black church's foundational role in the birth of rock n' roll via Sister Rosetta Tharpe, hip-hop as the natural evolution of street preaching – and, indeed, the fact that Black church music is the foundation of every popular American music form – receives a lot of play. Interviews with Legend, Hudson, Kirk Franklin and many others uplift the ebullience in Gates' presentation.

But it is when he's in the presence of regular church folks and community ministers, as opposed to during his interactions with the famous and familiar, that Gates is at his most radiant. Some of the best scenes are the candid moments he shares with parishioners who have captivated them with a story or by performing a song.

While foregrounding the community support and acceptance the Black church emphasizes, these hours don't glide over aspects of various denominations that have sparked controversy.

Gates calls out the fact that faith communities continue to wrestle with a history of homophobia and sexism that remains entrenched and will likely be for the foreseeable future. He also does this while featuring church communities that tend to LGBTQIA+ members and cites gospel's influence in the work of such gay music legends as Sylvester.  The foundation of the Black church, he says, is propped up by women and gay men.

He also looks closely at post-civil rights era rise of "prosperity theology" as popularized by the flamboyant Reverend Ike, a practice adopted by white evangelical ministers such as Joel Osteen and financial gurus like Dave Ramsey, people who contribute to the right-wing notion that poverty has little to do with flaws in the larger capitalist systems and everything to do with the individual failing to seek out blessings.

Each hour returns to the shifting meaning of "respectability politics," initially demonstrating the term though the example of choirs performing for white audiences to raise money for HBCUs.  In this context the concept is viewed as something of a net positive light, but Gates takes another view later on that reflects upon the detrimental and insulting classism the term implies.

You've probably noticed as well that "The Black Church" almost entirely refers to the Protestant tradition. Muslims and the National of Islam's rise and history receive the briefest of looks, and other denominations and faiths are passed over entirely.

I get why that is given that entire episodes could be devoted to the history of Black Jewish people in the United States, for instance. Many modern Black Catholic churches draw enough influence from gospel and African Methodist Episcopal traditions to make a side tour redundant, perhaps. Still, it's worth keeping this in mind as we interpret the title.

"The Black Church" probably could have done more to explore why younger people have stopped attending services, too. While this is reflective of an overall decline in religious affiliation in America, surely there are reasons unique to young Black Americans that merit an expanded airing.

Little of this takes away from "The Black Church" due to Gates' inviting take on the subject – cemented in the end by his circling back to his song. This time we see where he sang it, in the pulpit of the West Virginia Church he attended as a child, Waldon United Methodist as he shares a personal story about where his life with the Black church begins. It's a simple place of worship, small and humble. When he launches into song and is joined by people sitting in the pews, we watch it grow into  something monumental.