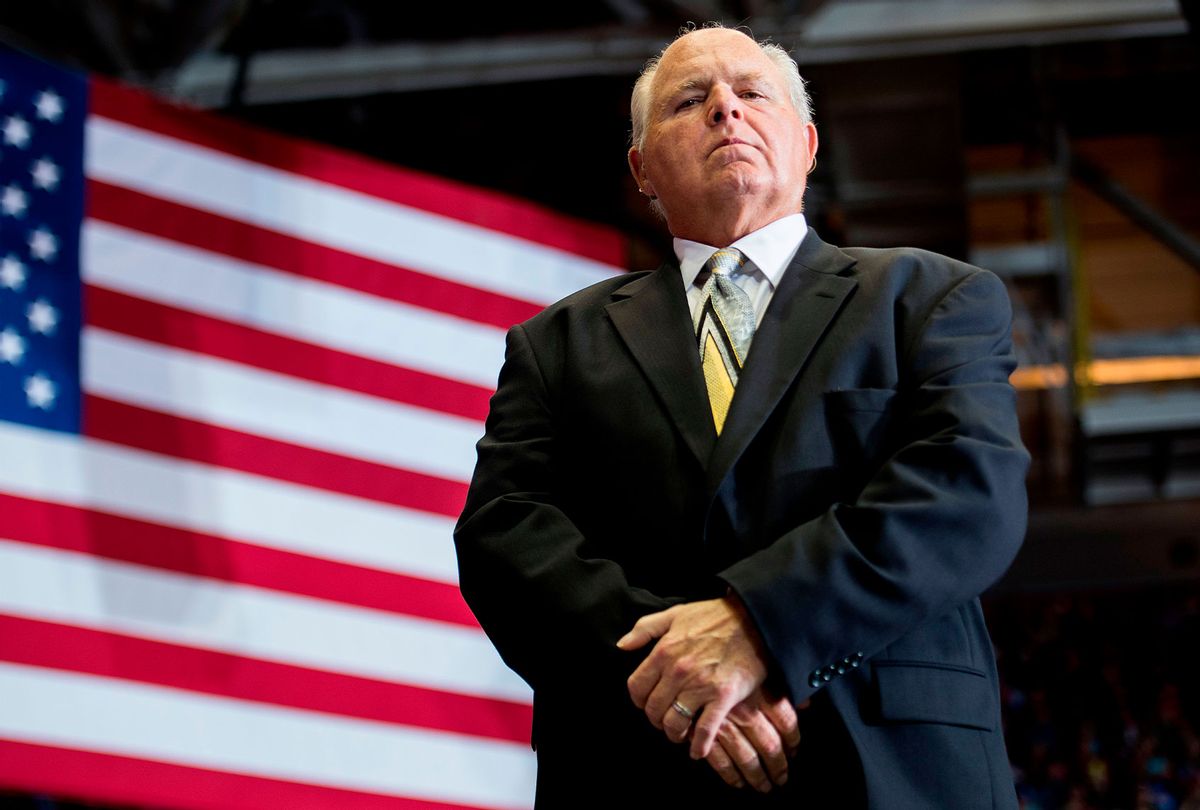 Leaders of our elite newsrooms had a full year to figure out how they were going to frame Rush Limbaugh's life.

He announced he was dying of lung cancer last February, right before Donald Trump gave him the Presidential Medal of Freedom, the nation's highest civilian honor. It was a striking moment, symbolic of how thoroughly Limbaugh's moral rot had infected the body politic, all the way to the presidency and its most hallowed traditions.

In the ensuing months, even the most stubbornly aloof mainstream news organizations began to publicly acknowledge Trump as a liar, a failure, a loser and an inciter of division and violence.

But calling out the hatred and bigotry that Trump established as the central tenets of the modern Republican Party remains a step too far. Our newsroom leaders still cannot bring themselves to declare that the hysteria and conspiracy theories that once only inhabited the lunatic fringes of our political discourse — until Rush Limbaugh, and then Donald Trump, came along — don't merit respect, but should be banished, rejected and denied.

And that is why, even with a year to pre-write and edit them, major media outlets on Wednesday published obituaries celebrating Limbaugh's extraordinary success as a "conservative provocateur." They whitewashed his once-unimaginably vile and divisive demagoguery as "comic bombast." They hailed him as "the voice of American conservatism," when what really matters about Rush Limbaugh is that he spread hatred more effectively and lucratively than any American before him. He didn't hide his bigotry and, eventually, neither did the Republican Party.

Even if you are trying to avoid hyperbole, it's not hard to come up with a top for a defensible Limbaugh obit. You could write something like:

He pushed the national political discourse far to the right, giving voice to racism, misogyny and conspiracy theories that became central to the rise of Trump and the radicalization of the Republican Party.

Heck, you could simply publish some of the horrible things he said, fairly high up in the story.

Instead, too many mainstream media obituaries reflected admiration for the guy, starting with the headlines.

As Daily Beast media reporter Max Tani tweeted: "i imagine many people did not find the bombast to be comical." No kidding.

Fisher basically subscribed to Limbaugh's own assessment of his achievements:

He saw himself as a teacher, polemicist, media critic and GOP strategist, but above all as an entertainer and salesman. Mr. Limbaugh mocked Democrats and liberals, touted a traditional Midwestern, moralistic patriotism and presented himself on the air as a biting but jovial know-it-all who pontificated "with half my brain tied behind my back just to make it fair," as he often said.

Fisher euphemistically described Limbaugh's grotesque villainization of his political enemies as "demonizing liberals and pushing conservative elected officials to hard lines on issues such as immigration, government spending and denial of global warming."

And he belittled Limbaugh's critics as humorless:

Although critics of the show spent decades decrying it as offensive, even cruel, his fans defended Mr. Limbaugh's insults as more funny than slashing. He won attention from far beyond his radio audience with barbs aimed at gays; Blacks; liberals; feminists, whom he sometimes called "feminazis"; and environmentalists, whom he derided as "tree-huggers."

The Associated Press obituary, by Matt Sedensky, which is certain to appear in countless newspapers, was headlined "Rush Limbaugh, 'voice of American conservatism,' has died." That was the AP's own characterization, despite the quotation marks. The story quoted Ronald Reagan calling him "the number one voice for conservatism," which is a bit different.

The lead paragraph was effusive:

Rush Limbaugh, the talk radio host who ripped into liberals and laid waste to political correctness with a gleeful malice that made him one of the most powerful voices in politics, influencing the rightward push of American conservatism and the rise of Donald Trump, died Wednesday. He was 70.

So was the third:

So was the eighth:

Limbaugh took as a badge of honor the title "most dangerous man in America." He said he was the "truth detector," the "doctor of democracy," a "lover of mankind," a "harmless, lovable little fuzz ball" and an "all-around good guy." He claimed he had "talent on loan from God."

It wasn't until the ninth paragraph that you read about Limbaugh calling his enemies "feminazis" or deploying anti-gay slurs.

It wasn't until the 10th that you got a taste of his incredible cruelty:

When actor Michael J. Fox, suffering from Parkinson's disease, appeared in a Democratic campaign commercial, Limbaugh mocked his tremors. When a Washington advocate for the homeless killed himself, he cracked jokes. As the AIDS epidemic raged in the 1980s, he made the dying a punchline. He called 12-year-old Chelsea Clinton a dog.

Even then, the article only referred to "accusations" of bigotry and racism — until, way down toward the end, there was an indication of his real legacy — from a critic, of course:

"What he did was to bring a paranoia and really mean, nasty rhetoric and hyperpartisanship into the mainstream," said Martin Kaplan, a University of Southern California professor who is an expert on the intersection of politics and entertainment and a frequent critic of Limbaugh. "The kind of antagonism and vituperativeness that characterized him instantly became acceptable everywhere."

At NPR, David Folkenflik's obit anemically referred to Limbaugh as a "conservative broadcaster … who entertained millions and propelled waves of Republican politicians."

Maybe some news organizations were caught by surprise by Limbaugh's demise, although I don't quite understand how that could have happened.

At the Los Angeles Times, the original obituary describing Limbaugh as a "controversial and widely influential conservative radio personality," was eventually updated, with Dorany Pineda noting Limbaugh's sway over Republican leaders and concluding that "In ways both big and small, it was Limbaugh who arose as the architect of the deep political and cultural divides in America that came into full focus during the Trump era."

The first version of the obituary posted by the New York Times, by Robert McFadden, was dramatically revised three or four hours later, with the additional byline of media writer Michael Grynbaum.

The headline calling Limbaugh "Talk Radio's Conservative Provocateur" was changed to say that he had "Turned Talk Radio Into a Right-Wing Attack Machine." Limbaugh was no longer "a divisive darling of the right," thank goodness. Instead, the Times wrote:

He became a singular figure in the American media, fomenting mistrust, grievances and even hatred on the right for Americans who did not share their views, and he pushed baseless claims and toxic rumors long before Twitter and Reddit became havens for such disinformation. In politics, he was not only an ally of Mr. Trump but also a precursor, combining media fame, right-wing scare tactics and over-the-top showmanship to build an enormous fan base and mount attacks on truth and facts.

His conspiracy theories ranged from baldfaced lies about Barack Obama's birthplace — the president "has yet to have to prove that he's a citizen," he said falsely in 2009 — to claims that Mr. Obama's 2009 health care bill would empower "death panels" and "euthanize" elderly Americans. In the wake of last year's election, he amplified Mr. Trump's groundless claims of voter fraud; on President Biden's Inauguration Day, during one of his final broadcasts, he insisted to listeners that the new administration had "not legitimately won it."

Even that was euphemistic. For the real story, you had to read Nick Robins-Early and Christopher Mathias' obituary on HuffPost, running under the headline "Rush Limbaugh, Bigoted King of Talk Radio, Dies at 70." They made an overwhelming case in support of the headline:

Once, after arguing with a Black man who called into his show, he told the caller to "take that bone out of your nose and call me back." Another time, Limbaugh asked his audience, "Have you ever noticed how all composite pictures of wanted criminals resemble Jesse Jackson?" while discussing the Black civil rights activist and politician. Limbaugh once ludicrously asserted that "if any race of people should not have guilt about slavery, it's Caucasians." He invited a guest on air who sang "Barack, the Magic Negro" to the tune of "Puff, the Magic Dragon." In 2016, he read an essay on air that had been penned by a well-known white supremacist.

Limbaugh's radio career was also one long exercise in misogyny, perhaps best summed up by his thesis that "feminism was established so as to allow unattractive women easier access to the mainstream of society."

Nearly every marginalized group or minority bore the brunt of Limbaugh's bigotry. Once, while speaking about the genocide of America's indigenous peoples, Limbaugh said, "Holocaust 90 million Indians? Only 4 million left? They all have casinos, what's to complain about?"

Limbaugh frequently mirrored white nationalist talking points when discussing Latino immigrants, whom he described as lazy and dependent on the government. He called migrants at America's southern border an "invasion."

An opponent of marriage equality — which he suggested was "perverted" and "depraved" — Limbaugh argued in 2016 that legalizing gay marriage would lead to bestiality. "What happens if you love your dog?" he said. He once referred to transgender people as being mentally ill.

Throughout the 1980s and '90s, Limbaugh also frequently denigrated those who were HIV positive, saying the best way to stop the spread of the virus was to "not ask another man to bend over and make love at the exit point." He spoke out against federal funding to fight the virus too, calling it the "only federally protected virus."

Limbaugh entertained an audience that was primarily composed of older, white conservative men by mocking women, minorities, and anyone else who did not embody his default listener — setting the tone for the toxic, cruel politics of the modern-day conservative movement.

There's no denying Limbaugh was a giant, and that his life makes a helluva story. But his legacy is not a media empire, it's his extraordinary influence on the rise of far-right, white-supremacist, reality-denying nationalism. He, as much as anyone, brought us Trump: the constant lying, the virulent racism and misogyny, the hostility toward governing, the corruption, and ultimately COVID denialism and insurrection.

The Limbaugh obituaries are a good test of whether mainstream news organizations are ready to call out the radical, hate-filled hysteria that preceded Trump and will clearly survive him, or whether they are going to go right back to normalizing it. The signs are not good.