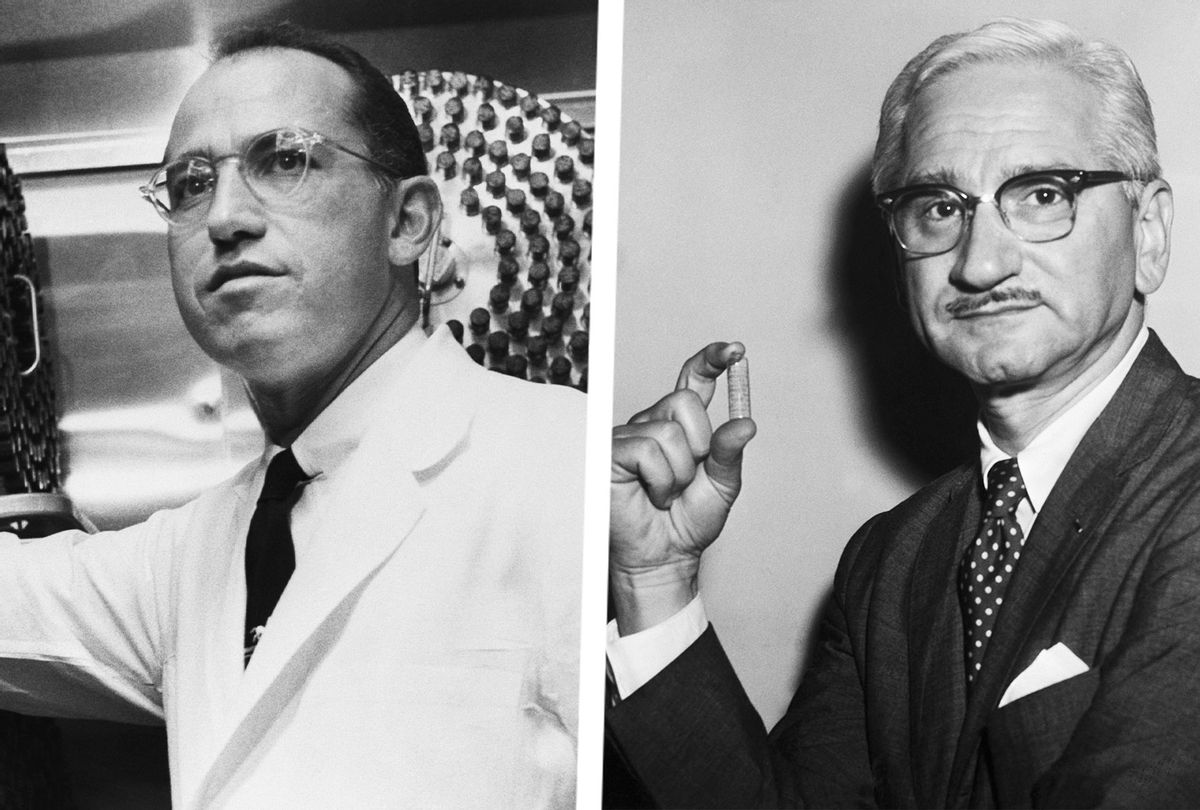 Dr. Jonas Salk stands in the University of Pittsburgh laboratory in which he developed a vaccine for polio. | Dr. Albert Bruce Sabin, of the University of Cincinnati College of Medicine, holds a vial containing a newly developed oral polio vaccine. (Photo illustration by Salon/Getty Images)
--

Adapted from Viruses, Pandemics, and Immunity by Arup K. Chakraborty and Andrey S. Shaw. Reprinted with Permission from The MIT PRESS. Copyright 2021.

In 1916, a major polio epidemic occurred in the United States, with the epicenter being in New York City. Approximately 27,000 people fell ill, 6,000 died, and many children were paralyzed. As not much was known about the virus, and most infected people were asymptomatic, it seemed that randomly selected children suddenly became paralyzed. This situation was frightening. In 1921, Franklin Delano Roosevelt was infected with polio at age 39. Roosevelt had just lost the election for vice president of the United States. That a wealthy and powerful American politician could be afflicted by the disease and become paralyzed exacerbated the fear. Cases of paralysis from polio grew in number each summer, causing parents to dread summer vacation for their children. Many parents forbade their children from going to swimming pools, the beach, movie theaters, and bowling alleys. To address the national health crisis, Roosevelt started a philanthropic organization whose major goal was to develop a polio vaccine. This organization came to be called the March of Dimes.

Two New Yorkers and graduates of New York University medical school, Jonas Salk and Albert Sabin, would take two different approaches toward developing a vaccine for polio and in the process would become bitter rivals. The rivalry would pit those who believed in inactivated vaccines against those who believed in live attenuated vaccines. Salk and Sabin were not the first to advocate for these two different approaches for developing a polio vaccine. But when these strategies were first tested in the 1930s, clinical trials using both types of vaccines were believed to have caused polio. These events dampened enthusiasm for any further trials for the next 20 years.

In 1949, three scientists — biomedical scientist John Franklin Enders, virologist Frederick Chapman Robbins, and virologist Thomas Huckle Weller — learned how to grow poliovirus in the laboratory. Salk immediately took advantage of this breakthrough. He scaled up production of the virus, and then determined just the right amount of formaldehyde required to inactivate it while keeping it intact. The March of Dimes decided to use all its resources to back the development of a polio vaccine based on Salk's inactivated virus. Given the national anxiety about polio, the US media focused on Salk's work. In a clinical trial, Salk was able to establish that his vaccine was safe, and also determine the vaccine dose required to elicit an antibody response. In three short years phases I and II of the trial were completed. In 1953, Salk announced that he was ready to test the efficacy of his vaccine.

The decision to start a large clinical trial was controversial. Enders and Sabin both questioned the safety of an inactivated vaccine, as well as whether an antibody response was a meaningful surrogate for protection from infection. Many clinicians also felt that a double-blind clinical trial was unethical as individuals in the placebo group would not benefit. Others were concerned that mostly children would be enrolled in the trial. Some worried that the wealthy would be more likely to volunteer their children since the disease afflicted them more, and this would bias the study. In the end, the phase III clinical trial used multiple approaches.

The clinical trial was an organizational tour de force. About two million children, almost all between 6 and 8 years of age, were enrolled. Since polio infections occurred mainly in the summer, all vaccinations needed to be completed before the end of the 1954 school year. The trial was conducted in counties with high rates of infection. One trial was a double-blind trial, with neither the physicians nor the children knowing which was the placebo group. In the other trial, the enrollees were first-, second-, and third-grade elementary school children. Only the second graders were vaccinated. Since no single company was able to manufacture the number of vaccine doses needed for the trial, many manufacturers were used. Vials of vaccines from different manufacturers were labeled similarly, but because there could be differences in product quality, the origin of each dose needed to be monitored.

At the end of the summer, the trial ended. Because of the massive amounts of data obtained, the computer company IBM was invited to help analyze the data. Finally, in the spring of 1955, on the tenth anniversary of Roosevelt's death, the March of Dimes announced the exciting results of the trial, which showed that the Salk vaccine worked.

Almost ten years older than Jonas Salk, Albert Sabin greeted these results with mixed emotions. Sabin had been working on polio for almost his entire career. He was the one who recognized that polio infected the intestines first because of fecal contamination of food or water. After multiplying in the intestine, the virus then spreads to the blood before being cleared by the immune response. In some cases, the virus is able to enter the nervous system from the blood, resulting in paralysis. Based on this work, Sabin believed that a good vaccine needed to provide protective immunity to the intestinal tract.

Sabin spent years weakening or attenuating the poliovirus by growing it repeatedly in different animals and in cells in the laboratory. Eventually, he was able to isolate a weakened form of the virus that he felt was safe to use in humans. The United States and the March of Dimes felt that Salk's vaccine had solved the polio problem and there was no need for another vaccine. So, Sabin turned to other countries for support. In the Soviet Union, millions of people participated in a clinical trial. With its success established, the Soviet Union began manufacturing Sabin's vaccine. It is remarkable that at the height of the Cold War an American polio vaccine got its first foothold in the communist world. Eventually, Sabin's vaccine would be approved for use in the United States in 1961 and, in a victory for Sabin, replaced Salk's vaccine in 1962.

Sabin's live attenuated virus vaccine had many advantages over Salk's vaccine. It was easier and cheaper to manufacture because, unlike Salk's vaccine, inactivation of the virus by careful treatment with formaldehyde was not required. Sabin's vaccine was also efficacious at lower doses, thus requiring fewer quantities to be manufactured. Administering Sabin's vaccine did not require syringes or needles. Vaccination involved swallowing a drop of fluid on a sugar cube. The live attenuated virus first infected the intestine, and elicited both IgG- and IgA-type antibodies. (IgG protects the blood and IgA protects surfaces of organs.)

IgA antibodies induced by Sabin's vaccine prevented the poliovirus from attaching to and infecting intestinal cells. Salk's vaccine, in contrast, only induced an IgG response, so it was able to block the spread of the virus only in the blood and nervous system. If someone vaccinated with Salk's vaccine got infected, the virus could still infect the intestine and potentially spread to others via the feces. For reasons that are not completely understood, Sabin's vaccine induces lifetime immunity, while Salk's offered protection only for a few years. For these reasons, Sabin's vaccine soon became the standard vaccine used around the world.

Mainly because of the large-scale use of Sabin's vaccine, poliovirus has largely been eradicated from the planet. Only a few natural infections occur now, mainly in Pakistan and Afghanistan where polio is still endemic. Sabin's vaccine is a live RNA virus. While it does not thrive well in humans, it does replicate in us. Since RNA replication is error prone, the virus in the vaccine could mutate to become dangerous again. The mutated virus could spread to others and cause paralysis. Indeed, most of the cases of polio seen today outside the endemic areas are caused by such mutations of the live virus in Sabin's vaccine. Because of this, many countries, such as the United States, have returned to using Salk's vaccine as the standard method of childhood polio vaccination. In hindsight, it was fortunate that we had both the Salk and the Sabin vaccines. This is something to remember as we hope for a vaccine that can protect us from COVID-19.

Adapted from "Viruses, Pandemics, and Immunity" by Arup K. Chakraborty and Andrey S. Shaw. Reprinted with Permission from The MIT PRESS. Copyright 2021.