China eradicated COVID-19 within months. Why won't America learn from them? 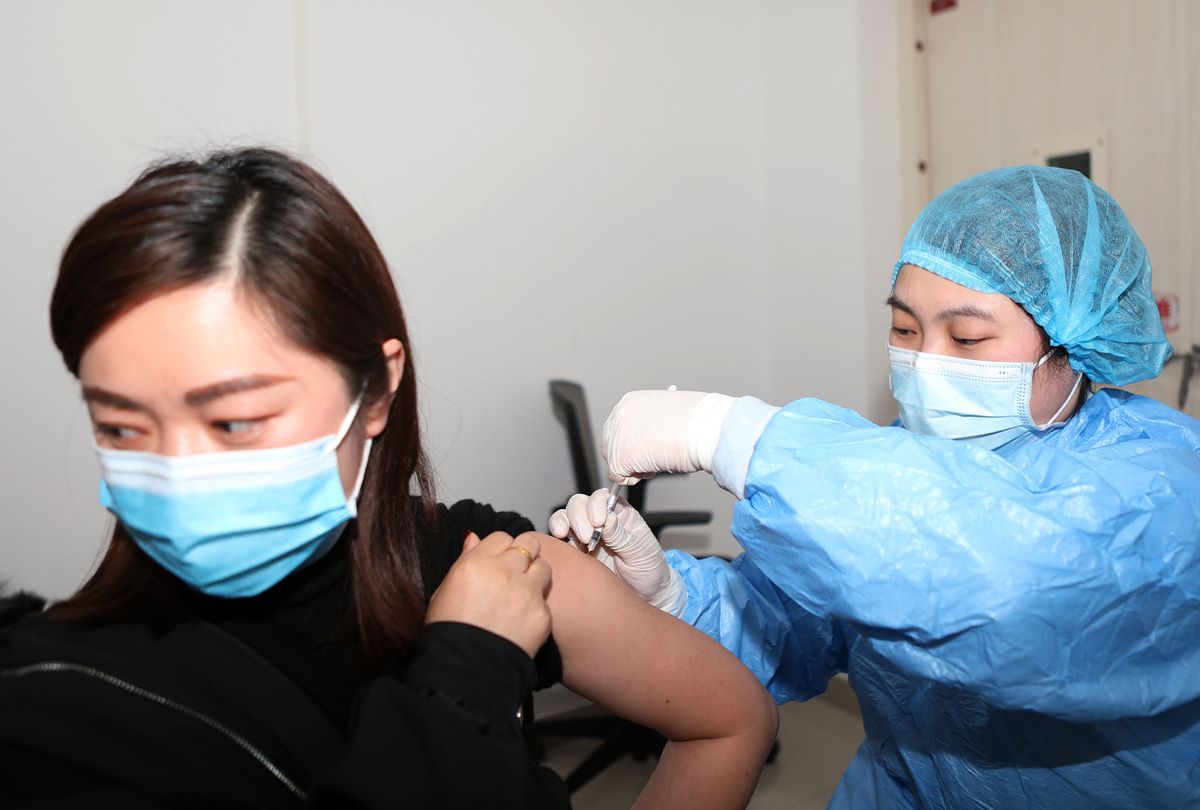 A medical worker inoculates a citizen with Covid-19 vaccine at a children's hospital in Chongqing, China, Feb. 16, 2021. (Costfoto/Barcroft Media via Getty Images)
--

"There is ample reason to believe that China really has done much better at containing the spread of the virus than other major economies."

Those were the words of Yanzhong Huang, a Senior Fellow for Global Health at the Council on Foreign Relations, in a January New York Times editorial. Even taking into account that there are valid reasons to be skeptical of Chinese government statistics, he argued that China's strategy for fighting the virus worked exceedingly well. You can see this in, say, photos of a massive music festival in Wuhan from August 2020, where partiers are packed, maskless, side-by-side in a crowd of thousands.

Or you can see it in statistics: The US has over 28.2 million coronavirus cases as of this week. China has less than 101,000. Indeed, the original epicenter of the coronavirus outbreak had all but eradicated the novel coronavirus within months, while Western countries were still struggling.

The science agrees. Studies in JAMA Network Open and Nature Medicine have confirmed, for instance, that Chinese cities had comparatively lower levels of infection than other large cities throughout the world based on widespread antibody tests performed between March and May. (As Nature Medicine put it, "the seropositivity in Wuhan varied between 3.2% and 3.8% in different subcohorts. Seroposivity progressively decreased in other cities as the distance to the epicenter increased.")

China, which was able to quickly develop a vaccine and is already sharing its vaccines with countries like Brazil, Chile, Peru, Indonesia, the United Arab Emirates and Turkey, has done so well that you would think that any nation would see this as a model for how to beat a pandemic. Yet the United States seems completely disinterested in learning any lessons from the country in which the pandemic originated. President Joe Biden may not vilify China over the COVID-19 pandemic to the same extent as his predecessor, Donald Trump, but he is certainly not above posturing against the country.

Although Biden has reentered the World Health Organization (WHO), which Trump left while claiming it was under China's control, administration spokespeople have made a point of saying they do not entirely trust the WHO's report on the pandemic's origin. White House national security adviser Jake Sullivan, for instance, told reporters earlier this month that "we have deep concerns about the way in which the early findings of the COVID-19 investigation were communicated and questions about the process used to reach them," later adding that "it is imperative that this report be independent, with expert findings free from intervention or alteration by the Chinese government."

Perhaps the Biden administration is justified in being suspicious of the Chinese government, and he alleges that the country withheld data about the earliest stages of the outbreak  — a charge that China denies. (Notably, multiple U.S. governors, including New York's Andrew Cuomo, covered up deaths in their states.) Still, there is a very fine line between being skeptical of an undeniably repressive government and depicting China overall as a villain. The latter impulse is dangerous for two reasons: It causes us to overlook the many things that China has done right in handling this crisis and it risks playing into Sinophobia, or prejudice against people of Chinese descent.

"I think we have to be very nuanced about our judgments of China," Dr. Richard Horton, editor-in-chief of the prestigious medical journal "The Lancet," told Salon in an interview earlier this month. "I worked very closely with a group of Chinese scientists and doctors who were on the frontline at the outbreak in Wuhan last year, and I can honestly say that the world owes them a debt of gratitude for the way they fought this outbreak when it first took place." He mentioned how frontline scientists sequenced the virus' genome and posted it publicly in January, wrote up the initial case descriptions, emphasized the transmissibility of the virus and alerted the world that there was a risk of a global pandemic.

"This work was done in China," Horton explained. "So when I see and hear Western political leaders vilifying China in the way that they do, I think that there is a dimension of Sinophobia, even racism, against the Chinese." He added that this does not mean "that the Chinese government doesn't have some very important questions to answer about the very early stages of what took place in Wuhan and how that information was handled by the local authorities there, how it was transmitted to the government in Beijing and how they evaluated that evidence."

Meanwhile, there were plenty of Chinese scientists who American leaders could have contacted for help and often did not do so, Horton says: "George Gao, director of the Chinese CDC, or Chen Wang, President of the Chinese Academy of Medical Sciences, or the Ministry of Health's Ma Xiaowei, or the former minister of health who has a very well-known international laboratory in Shanghei, Chen Zhu."

And America should have not only contacted them, but paid attention more generally to China's response to the pandemic.

"I think China has done certainly a better job than the United States in terms of reigning in the virus," Huang told Salon. "If you look at the number of cases — if we accept the Chinese data — since the beginning of mid-February, we have seen a dramatic drop in the number of cases, meaning infections and deaths. And then certainly in early April, some time like that, then when China lifted the the lockdown in Wuhan, the number of cases has been sustained at a very low level."

Huang's views were echoed by Horton.

"If you actually look to East Asian countries, we can see now that countries such as China, Taiwan, Singapore, to an extent Vietnam, certainly New Zealand and even laterally Australia, were about to mount decisive responses and understand that the only way to address this virus through a strategy of what one might call 'zero COVID,'" Horton noted. This strategy, Horton explained, means suppressing the virus to such an extent that you do not have community transmission.

Horton's observation is backed up by multiple reports on China's response. After an initial slow reaction, Chinese officials responded aggressively once the outbreak began to overtake their country, not by hoping a vaccine or magic cure would become available but by proactively preventing transmission and controlling individuals and areas that were infected. This included widespread testing so they could detect people infected with the virus as early as possible; isolating individuals with mild to moderate symptoms by putting them under strict quarantine; finding out who infected individuals had contacted to determine if they had spread the infection and treating the infected — from mild to severe cases — in quickly constructed medical facilities. The government also required residents of infected areas to wear masks, stay at home and practice social distancing; encouraged people to maintain good personal hygiene; and performed symptom surveys to keep tabs on whether the infection was spreading.

China first did these things in Wuhan, the city where the virus broke out, but soon spread these policies to everywhere that the virus popped up: Beijing, Shanghai and so on. They rapidly set up field hospitals, imposed mandatory and immediate lockdowns, mass tested the population and maintained quarantines when necessary.

Because the Chinese government is not the most reliable source of data, it is difficult to precisely quantify how well these policies have worked. Still, it is undeniable that life in many Chinese cities has more or less returned to a pre-pandemic normal since last summer, albeit with more travel restrictions. As Gregory Poland, director of the Vaccine Research Group at the Mayo Clinic, told The Lancet, "They moved very quickly to stop transmission. Other countries, even though they had much longer to prepare for the arrival of the virus, delayed their response and that meant they lost control." China has also made a point of sharing some of its vaccines with poorer countries, an act known as vaccine diplomacy that the government almost certainly hopes will spread good will.

Ali Mokdad, a professor of global health at the University of Washington and a former official with the international health program at the Centers for Disease Control and Prevention, made a similar observation to NBC News. "They have done an amazing job of controlling the virus," Mokdad said.

Americans' inability to take lessons from China's successes in combatting the virus speaks to a deep Sinophobia embedded in American history — one that can be traced back for generations.

That Sinophobia came out with a vengeance when the pandemic first reached the United States, as many Americans ignorantly blamed Asian people for the virus. Almost 2,600 incidents of anti-Asian violence were reported in the United States from March through the beginning of August 2020. Thirty-one percent of Asian Americans reported being targeted by racist language and 26 percent said they feared being threatened or assaulted, higher numbers than for any other racial group. The Congressional Asian Pacific American Caucus found that anti-Asian tweets and conspiracies rose by 85% as of October.

These sentiments were no doubt inflamed by people like Donald Trump, who as president repeatedly referred to COVID-19 as the "Chinese virus," as did House Minority Leader Kevin McCarthy.

"The comments made by President Trump intensifies the xenophobia and racism that's become rampant against Asians and Asian Americans globally," Rosalind Chou, a sociology professor at Georgia State University, told Salon in March. "He's fueling fears against Chinese, specifically. However, people of Asian ancestry across the globe may face collateral damage. These statements are dangerous and erroneously assign blame to people who are as susceptible to the disease as anyone else worldwide."

Chou's views were echoed by Margaret Fung, executive director of Asian American Legal Defense and Education Fund, who told Salon at the time that "calling COVID-19 a 'Chinese virus' leads to mistaken beliefs that Asian people are more likely to be infected by the coronavirus and should be avoided or quarantined. The virus is not linked to race or ethnicity, but the pandemic has led to a sharp rise in racism and hate violence against Asians and Asian Americans."

This Sinophobia long precedes the COVID-19 era. Racism against Chinese Americans flared up in the 19th century when Chinese immigrants were hired to do jobs like building the transcontinental railroad, with white Americans claiming that Chinese Americans were taking their jobs and ignoring how the Chinese Americans were horribly exploited by their employers. Overt discrimination was common. It is not unprecedented to believe that there is a structural legacy to the way

For now, life in the world's most populous country is mostly back to normal: restaurants are open in most cities, and public transit active. Meanwhile, the Western World still struggles to contain the virus that China dealt with months ago. Yet China's government is not gloating about this — rather, it has repeatedly invited the rest of the world to share in their knowledge and resources. America hasn't heeded the call.