CPAC veers into neo-Nazi fantasy: Was it deliberate? That hardly matters

Extremism experts on CPAC's "inadvertent" use of a Nazi-associated rune: A clear signal, with unclear motives 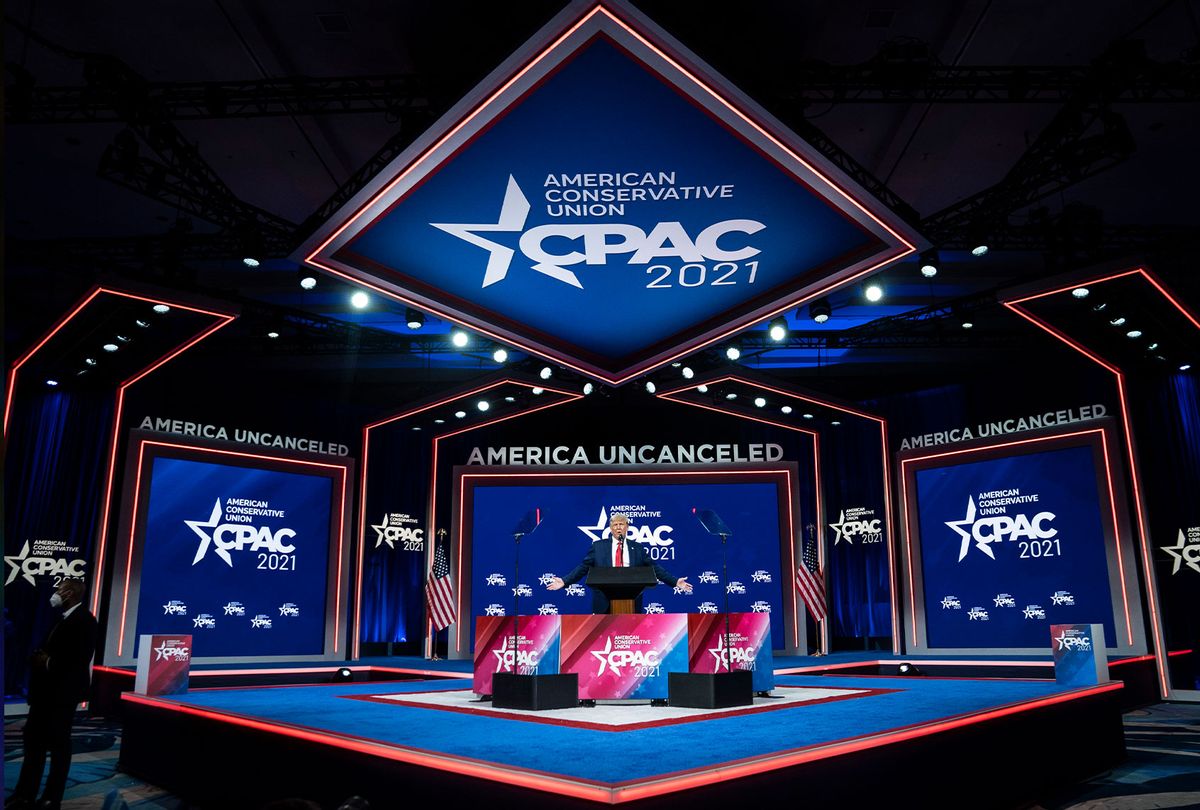 Once upon a time, the Conservative Political Action Conference was a relatively traditional and "mainstream" gathering of many divergent currents on the political right.

Fueled by the obsessive racist backlash against Barack Obama's presidency and paranoid fantasies about a bogeyman fictional version of "the left," the Republican Party rapidly became more extreme, contemptuous not just of "liberals" but of multiracial democracy and reality itself. During those years, CPAC came to resemble a political zoo or circus where assorted cast-offs, broken toys and fringe figures from the Republican Party and conservative movement could gather together and hatch their nefarious plots.

As a result, during the Obama era CPAC became something of a bellwether or leading indicator of the Republican Party's embrace of right-wing extremism and anti-democracy fervor.

Writing at the Washington Monthly, David Atkins summarizes this:

But CPAC isn't a sideshow. It's the main stage of the conservative movement, predicting its future behavior in an era of widening asymmetric polarization. CPAC presaged the rise of the Party of Reagan over that of Gerald Ford and Dwight Eisenhower. It heralded the scorched-earth confrontational politics of Newt Gingrich in the Bill Clinton era. It elevated George W. Bush at a time when the mainstream GOP still saw itself more in the mold of John McCain. It celebrated the Tea Party before GOP legislators had fully embraced it. And it promoted openly racist birthers and conspiracy theorists like Donald Trump at a time when the the mainline GOP was producing superficially anti-racist autopsies and promoting candidates like Marco Rubio and Spanish-speaking Jeb Bush.

So if we want to know where the Republican Party is heading today, we should pay close attention to CPAC.

It is now an obligatory stop for Republican presidential candidates and others seeking high office to win the approval. This year's CPAC gathering — held in Florida rather than Washington, D.C. — was of course where the recently deposed former president and authoritarian cult leader announced his return to public life and plans to further dominate the Republican Party.

Today's Republican Party did not slip and accidentally fall into neofascism and racial authoritarianism. Rather, it willingly leapt into that cesspool. CPAC has devolved into a "safe space" where such vile ideas are cultivated and normalized.

In her landmark 1951 book "The Origins of Totalitarianism," Hannah Arendt previewed the way today's Trump-controlled Republican Party has devolved into a fascist authoritarian movement, a cultural and political force that transcends voting, campaigns, elections and other forms of "normal" political behavior.

Continuing to pretend like we still live in a two-party representative system will only give room and cover to a fascist movement that is intentionally and systematically demolishing democracy and civil liberties. We must recognize the reality of the threat.

What we've witnessed, over the past few years, is the reveal of the GOP as a fascist movement to protect the white, wealthy, and powerful, an angry and violent rejection of democracy and human dignity. There is no saving them, there is no unity, there's only avoiding tragedy.

At this year's CPAC gathering, the escalation that Sexton describes became even more grotesque and dangerous. As reported by many reporters, journalists, and other observers, the main stage at CPAC was shaped like the Othala or Odal rune, an ancient proto-Germanic symbol worn more recently on the uniforms of some of Hitler's most fearsome soldiers, including the infamous Waffen-SS.

In our own time, the Odal rune has also been adopted by neo-Nazis and other white supremacists in both the United States and abroad in an effort make their politics appear more palatable and normal to "mainstream" conservatives and other members of the right wing.

Predictably, Matt Schlapp, the organizer of this year's CPAC gathering, denied any connection between the shape of the main stage and Nazism. Notably, Schlapp did not order the design of the stage changed after he was made aware of its ominous symbolism and history.

Ultimately, it is not the physical design of the stage at the 2021 CPAC gathering that is concerning, but more importantly the white supremacist and other racist and anti-human values and ideas being shared and reinforced by the event's speakers and attendees.

To better understand the relationship between the Odal symbol, Nazism, white supremacy, CPAC, today's Republican Party and the broader right-wing movement, I asked a range of experts from various backgrounds for their insights.

Starting with the disclosure that Steve Bannon's Breitbart sanitized and mainstreamed neo-Nazi propaganda during the 2016 Trump campaign, that Trump himself retweeted neo-Nazi imagery during the campaign, and that within conservative media outlets there were "ghost" white nationalists, this shows that the infiltration has never stopped. Moreover, the displays are becoming even more overt.

I suspect, in a similar vein with Trump's use of "88" notations, that this not initially intended for GOPers or conservatives who may or may not be aware of such imagery. Rather, it is intended for those on the left to notice and bring it out in the open, and then the right can have a culture-war fight about it. This reinforces their narratives of "cancel culture," and their persecution complex. I think it is part trolling, part "owning the libs," and using the libs to educate their own publics.

Moreover, the neo-Nazis and Klan, since at least 2005, have used conservative gatherings to infiltrate and spread their message. They approached the Tea Party with sanitized messages, hid their Nazi tattoos, and tried to coax them toward their viewpoint. They did this during the nativist anti-immigration movement between 2005 and 2008. They mixed with middle-class protesters. They've done this with the "reopen" campaigns. There is also speculation that at least some of the boogaloo militia were disguised neo-Nazis pushing their accelerationist agenda. Neo-Nazis and the Klan have had a chance to mingle with conservative, Christian GOP voters. You can see this in the conflation of the neo-Nazi "white genocide" with the more sanitized "great replacement" conspiracy theory.

Ultimately, what I see with the image at the CPAC conference is part of a long-term trend where neo-Nazis sanitize their rhetoric, sanitize their personal presentations and infiltrate the GOP, the Christian right and the "conservative" movement.

Gavriel Rosenfeld, historian, and author of "The Fourth Reich: The Specter of Nazism from World War II to the Present," "Hi Hitler! How the Nazi Past is Being Normalized in Contemporary Culture" and "The World Hitler Never Made: Alternate History and the Memory of Nazism"

Whether or not the much-commented-upon use of an Odal rune was coincidental or deliberate in creating the CPAC conference stage, the GOP in recent years has flirted with symbols and images used by the American and European far right.

GOP politicians, including the now ex-president, have earned warranted suspicion for playing symbolic footsie with right-wing extremists in the form of various social media postings, retweets, and other dog-whistle endorsements.

Most of these endorsements have involved new symbols used by the far right: Pepe the Frog, the VDare/Lion Guard Lion symbol (proposed as a possible symbol of a future Trump-led Patriot Party), white power "OK" salutes, etc. Thus far, while many MAGA supporters overtly use Nazi-era symbols (black sun, SS runes, etc.) the GOP itself has rarely endorsed actual symbols used in the era of classical fascism.

The most notable exception was probably Trump's retweeting of tweets smearing antifa with the Nazi-era red triangle sewn onto the uniforms of left-wing concentration camp prisoners.

The Odal rune would be a notable exception to this, but at this point, CPAC has plausible deniability until better evidence surfaces.

I'd say we are right to be vigilant about paying attention to (and calling out) the increasing willingness of the far right to "say the quiet part out loud" in terms of overt imagery, even if occasionally the fears are misplaced. For some time now, left-liberals are justified in being fearful of the increasingly unhinged right.

Tim Wise, anti-racism activist, speaker, and author of the new book "Dispatches from the Race War"

There are two ways of understanding this. The first is as a strange coincidence, in which a right-wing party whose leader has told white nationalists and assorted fascists to stand back and stand by, and claimed some among the Nazis in Charlottesville were "fine people," just so happens to design the stage at their signature event in the shape of a Nazi symbol.

The second is as a deliberate wink and nod to those within the conservative movement who know the white nationalist base of their party and are signaling to it. But here's the thing: Whichever of these is true hardly matters.

The Nazis will see this as a subtle endorsement of their ideology. That means more terrorism, more death and an ever-increasing threat to democracy. Which is why even if the design were innocent, this simply goes to show that the right has no interest in guarding against white racist terror by distancing itself from the kinds of people who stormed the Capitol or shot up the Walmart in El Paso or organized Unite the Right in 2017. Because if they wanted to disavow and distance from that bunch they would take pains to avoid things like this. They would work to avoid any sniff of Nazi impropriety. They want it both ways — to punch and then hide their hands. The rest of us must make it clear: This is who they are. It is who they have been for a long time.

The use of Nazi iconography is clearly meant to thrill the GOP's increasingly racist base and to trigger the libs, as well as supporters of American democracy. No one should be surprised. They want people speculating about whether the symbol was used deliberately so as to distract from the now unquestionable reality, which is that the Republican Party is an extremist party. Mainstream Republicans have embraced white supremacist ideas that pose a danger to communities of color, just as they did in California during the '90s amid fears about the "browning of America." Stephen Miller is no longer a fringe figure of the party. He is the Republican Party.

Miller is always laundering white supremacist ideas through the language about heritage. I'm not surprised by the use of this specific symbol. What it dog-whistles is "white heritage."