Tributes to outgoing Post editor Marty Baron pour in — but his actual words are arrogant, smug and condescending 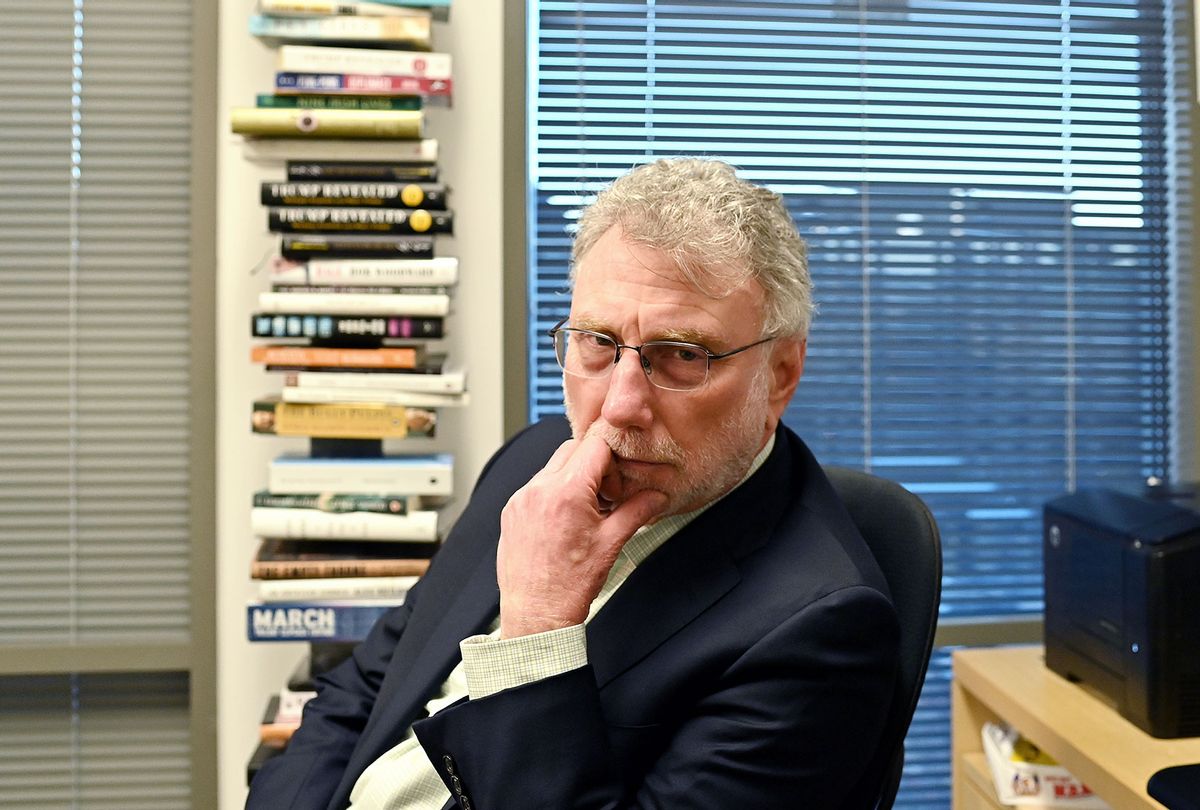 Marty Baron, who stepped down as Washington Post editor this week, has been hailed as a hero by journalists at his own organization and others in the media elite. He departs amid a shower of adulatory news stories and softball interviews.

But one exchange in a Vanity Fair interview perfectly demonstrates why his departure is welcome, and overdue.

At issue was what Baron had learned from confronting the powerful criticisms being raised by some staffers about hiring, coverage and newsroom conventions that, as former Post reporter Wesley Lowery once put it, unquestioningly reflect the "views and inclinations of whiteness."

Baron's response was clueless, condescending and dismissive. It showed that he was only interested in performative listening — in appearing to have listened — rather than in listening itself. It made clear that he considered staffers who challenged him as ignorant supplicants who were asking him to toss away core journalistic principles "because of the sentiments of the moment," which of course he would never do, rather than as peers who want the Post to actually live up to those principles.

It perfectly exemplified the sense of unquestioned white, male superiority that a growing number of journalists — Black, brown, white, young, old, male, female, nonbinary and at every career stage — believes is devitalizing our newsrooms at a moment when society urgently needs us to step it up.

Here's the exchange between Baron and Vanity Fair's Joe Pompeo:

Pompeo: Well, what is the answer to these very heated, emotional, divisive discussions around race and speech that we're seeing again and again, not just at the Times, but also in just the past couple of weeks alone at Slate, at Gimlet? I guess, what did you learn or take away from your own experience as a manager confronting these issues?

Baron: Clearly we need to do a better job of listening. I think I and others probably need to do more in anticipating these issues, perhaps listening better to the staff more closely, and then drawing people out before pressure builds and it explodes. And you know, that's probably something that I should have done. And probably something that should be done more regularly at other news organizations, including our competitors. I think people want to be heard. We need to listen to them, and by the way, listening doesn't necessarily mean that we're going to end up agreeing. I do think it's important that news organizations have standards and that people stick to those standards. We are institutions; we are more than a collection of individuals under one group. Our institution stands for something. We have core principles that we believe in, and I wouldn't just toss those away just because of the sentiments of the moment. But I do think that we need to talk those out more regularly with people on the staff. It's quite possible that the way we apply those principles can be adapted to the different environment that we're in today. But I don't have a ready answer for how to do that. And I'll be interested to see how people navigate it. It's just not very easy to navigate.

What did he learn from confronting these issues? He learned nothing.

"Our institution stands for something," Baron says.

I posted Baron's comments on Twitter and asked for feedback from others.

The most generous interpretation was that it was just word salad — so full of perhapses and possiblys and undefined terms that it amounted to nothing.

"He's using a whole lot of words to give the impression that he's saying something, but the tell is in stuff like repeating 'standards' without saying anything about what those standards actually are, or how he thinks they function," wrote @Scoaliera1.

But there was also a lot of legitimate anger at Baron's dismissiveness. "I want to know how does having a non-regressive stance on race go against 'core principles'," replied journalist Sydette Harry.

"Marty Baron seems to saying that not reporting from a white privilege perspective is somehow incompatible with 'standards' & 'core principles' of the Post — even worse, he sees the concerns about bias in coverage as 'the sentiments of the moment,'" wrote @PaulLukasiak.

"This 'we need to do a better job of listening to people' is garbage. People who know have been saying what's systemically wrong and how to fix it for a long, long time. If they haven't gotten the message this late in the game, it's on purpose," wrote @AnimalSmug.

Baron's only regret appears to be that he didn't let staffers blow off enough steam to prevent an explosion.

It was "very much a patronizing 'pat on the head' position," wrote @BeckyIB.

Diversity but not really

Baron's comments acutely exemplify how newsroom leaders' moves to diversify their staffs not only have been insufficient, but have been totally undercut by their refusal to listen to the people they've hired.

They refuse to seriously reassess their above-the-fray, both-sides approach to covering urgent national issues, even when the people they hire point out that some of those issues are matters of life and death. They refuse to consider that the vaunted notions of objectivity they defend so fiercely are actually, in practice, the views of a white guy who doesn't even exist.

As New York University journalism professor Jay Rosen wrote in June, in the midst of a staff revolt at the New York Times:

Many decades ago, the leadership class in big league journalism accepted the argument that racial integration had to come to their newsrooms, or the journalism would suffer. Or at least, this is what they said to themselves. But what they also said (without quite realizing it) is: We can have all that, a more diverse and multi-colored newsroom, and maintain the view from nowhere. They never faced up to the contradiction: minority journalists who are supposed to simultaneously supply a missing perspective and suppress that perspective in order to establish their objectivity.

Baron further illustrated that point in an interview with Kojo Nnamdi of Washington's public radio station WAMU. Baron acknowledged the importance of having diverse life experiences represented in the newsroom, which he said "opens our eyes and our ears to what we might not otherwise see."

But moments before, Baron had stressed his commitment to a concept of objectivity that he defined precisely as rejecting the value of life experiences in the reporting process. People "may come into a story influenced by their own life experiences, their own preconceptions," he said. "It's really important that we try, as hard as possible, to set those aside."

And what that really means is adopting a "neutral" position that by default centers the life experiences of a white male.

The subversive subtext of the homages

As it happens, the coverage of Baron's departure, though intended to lionize him, unintentionally highlighted to what extent newsrooms, and their narratives, are dominated by white men.

New York Times reporter Marc Tracey's article about Baron's departure, and his years under new owner Jeff Bezos, was headlined in the print edition: "The Men Who Remade The Washington Post."

The response, including from some Post staff, was blistering.

"So grateful for Great Men," Post foreign affairs reporter Emily Rauhala tweeted, along with a nauseated-face emoji. "It's honestly an honor just to provide low level female assistance to the men making our era."

The fact that a headline like that could coast its way into print says a lot about the realities of the industry.

The article itself, to my mind, also failed to make the case that Baron had done much more than not waste the vast amounts of money that Bezos poured into the enterprise. It was that investment that halted the Post's tailspin into irrelevance. Baron hired an enormous number of very talented people — and they did the work he gets credit for.

Wesley Lowery bristled at yet another Baron puff piece, this one by the Washington Post's own Sarah Ellison. Ellison wrote that "In Baron's final year in Washington, unexpected leadership challenges emerged at The Post."

Racial tension at WaPo was an "unexpected" leadership challenge last summer? That will be news to the dozens of black WaPo staffers who met w/Marty in 2015 to specifically request these issues be addressed. He said that he was too busy "saving" the paper to worry about diversity

The idea that racial tension at WaPo — a newspaper that has had constant racial tension since it started letting black people work there — would be "unexpected" just absolutely nonsensical and ahistorical.

Baron's refusal throughout all these interviews to acknowledge mistakes tells you so much about him and his fellow newsroom leaders, and why they never learn.

Even the one time that Baron admitted any error in coverage, he did so grudgingly, and without remorse. Under persistent questioning from Marc Pitzke and Roland Nelles of Der Spiegel, Baron acknowledged that journalists should have been "much more forthright about Trump's mendacity." But as I wrote at the time, Baron then cast journalists as the victims of a president who exploited their "good principles," and insisted that it didn't really matter anyway.

In several interviews, Baron has engaged in revisionism that I can personally debunk. According to Baron, it was Bezos' brilliant idea, when he bought the Post in 2013, to have it pursue a national and international audience, not just a local one.

As Mark Stencel, who valiantly championed that exact idea for much of his nine years at the Post, noted:

The fact is that the Post has long resisted reform from within as well as from without. And in his victory lap, Baron unwittingly explained why: Because they don't listen to constructive criticism.

In the Post article, Baron said he was happy when Bezos bought the paper.

"I had long felt — actually well before that — that we needed fresh thinking in the industry," he said. "Because I was not hearing any new ideas from anybody."