In the documentary "Stray," dogs are "walking emblems of resistance against capitalism"

"Since they’re not complicit in the gears that make our human society thrum, dogs are honest," says the director 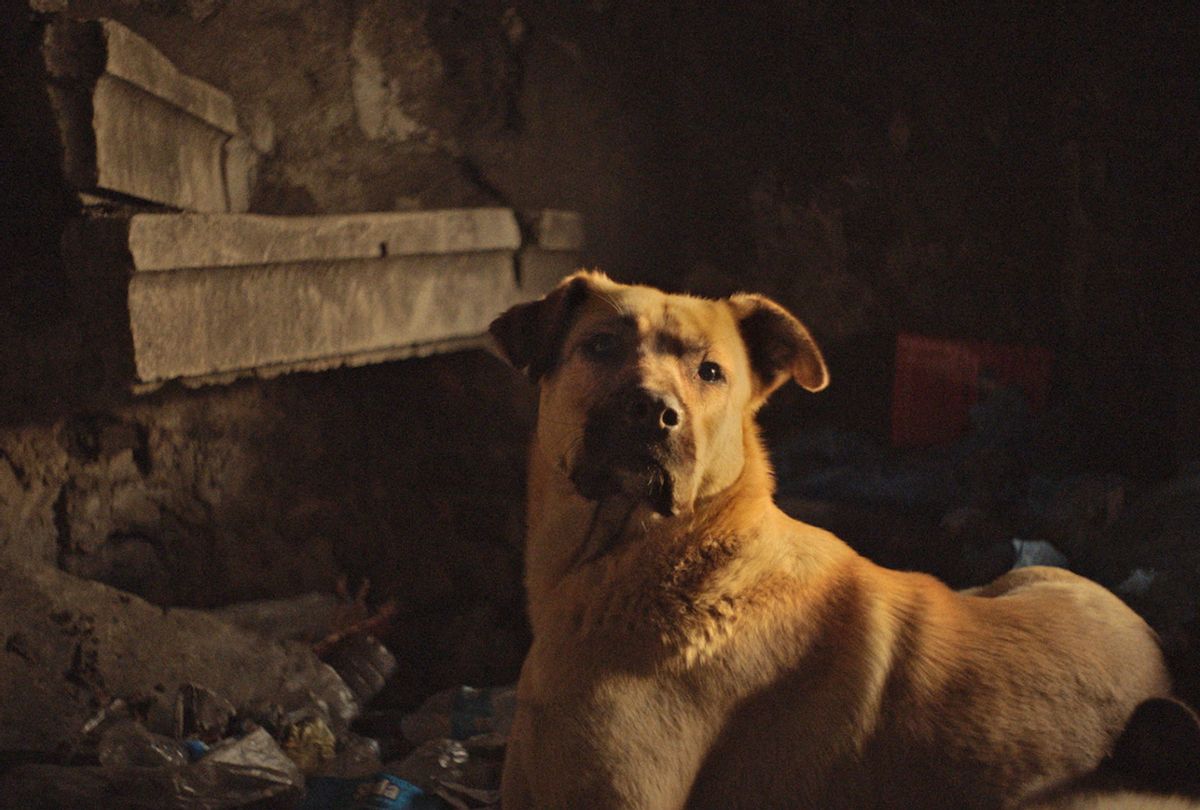 Zeytin finds shelter in an abandoned building along the Bosphorousin Istanbul, Turkey in "Stray" (Magnolia Pictures)
--

Turkey has a "no kill, no capture" law towards all its stray animals, including the 100,000 dogs that roam the streets of Istanbul. From 2017 to 2019, documentarian Elizabeth Lo focused her lens on three — Zeytin, Nazar and Kartal — and, with a quiet compassion, assesses what their lives say about the human condition and how we treat each other in her new film "Stray."

According to Lo, due to the dogs' inherently transient lives, in the course of the film they would encounter all sorts, "whether it was women who were protesting for their rights on the streets or the refugees from Syria who were trying to make a living in Istanbul – a country that's not their own – or musicians busking on the side of the street." The young men from Syria in particular are intent on integrating their lives alongside their canine counterparts'.

The dogs' lives are also so radically different from those of so many humans, viewers can glean lessons from watching these peripatetic routines.

"They're sort of walking emblems of resistance against capitalism," Lo said. "They're not property, they don't participate in the job market. They just feed off scraps and the mercy of the people, and I think that's really beautiful about their resistance."

Lo spoke with Salon about the challenges of filming stray dogs (who don't adhere to a call schedule), the teachings of the philosopher Diogenes, and the inevitable comparisons between "Stray" and the stray cat-focused documentary also set in Turkey, "Kedi."

The dogs in "Stray" had so much personality. How did you go about "casting" the film, if you will?

Iinitially, we tried to film with many dogs in the casting process, but what would happen was, once the dogs bonded with us, they would inadvertently follow our production. We would meet them in the daytime, and they would sort of look at us to see, "Where are we going next?"

That kind of undermined the premise of the film, which was to follow a dog and see where the dog takes us. And Zeytin really emerged as one of the only dogs who was so singular in her stubbornness and her radical sense of independence, where she never would allow me to dictate or orchestrate where she should go

I remember the first time I tried to put a collar and a leash on her to try to pull her somewhere, but she refused. She sat down on her haunches and refused to move. And I think in that moment, I knew she should be the star of this film, because she could fulfill the promise of enveloping audiences in a non-human way and see where that agency takes us away from what I, as a human being may, be interested in. At that point, the film would be left up to her, the film's narrative would be left up to her and her desires and her concern.

From a production standpoint, I was curious — you couldn't call up Zeytin and be like, "Hey, what time do you want to meet up today? When do you want to do your interview?" So, I was curious how you found her and if there were days where, even if you did find her, she just didn't do much?

We were actually sponsored by Tractive GPS, and they had these little GPS trackers that we could hook onto collars to put on the dogs, and that would sync up to our phones, so we'd be able to see where Zeytin was going at night and then we'd find her the next morning.

In terms of the stray dog schedule — yeah, there's no call sheets. There were days early in the production where we were nervous because she would just lay on the street in a cafe for like six hours, especially if it was hot. And I remember fretting, "Oh my god, what is this film going to be? What do stray dogs do? They don't do anything! They don't' have owners, they don't have jobs. What is going to fill this time?"

In the beginning, we actually tried to bribe her with foods. Like, if she was sleeping on her fourth hour in the afternoon, we'd get some kebabs and try to see if she would wake up for those, but she never did because she was able to find such a rich diet on her own. She was unbelievable. So, we fully just accepted the schedule and rhythm and pacing of a stray dog.

That leads me to a question about the philosophy of underpinning the film. "Stray" quotes the philosopher Diogenes, who lived his life as a "stray" of sorts in the streets and was referred to by other philosophers as a dog. What do you think humanity can learn from stray dogs — or perhaps put another way, how do the dogs reflect humanity?

I think, in reading a lot of Diogenes and his oral lessons that were passed down, it seems like he conceived the stray dog as a figure who is half in and half out of human society; who was not tied to marriage, property, wealth or work. In that capacity, since they're not complicit in the gears that make our human society thrum, dogs are honest observers of us.

And actually, there's a writer called Alexandra Horowitz, who writes about dogs and is a dog scientist, and she says that dogs are actually the greatest anthropologists because they spend their lives watching us and observing us — even the stray dogs do. I think what was really beautiful about Diogenes, and modeling his way of life and philosophy around dogs, is that he believed there was so much to learn by watching them. This film is trying to put that ancient philosophy into practice. I can't say definitively what the lessons are. For every viewer, it will be a different lesson, I think.

Speaking of humans, what was the process of integrating human encounters in the film?

When I set out to make this film, I knew that in following a stray dog, because they're not allowed in private spaces, and that they occupy mostly public ones, that inevitably, the dogs would be encountering all the types of different populations that occupy the streets.

And so I knew that Zeytin would be a window into society, allowing us to cut across gender, class, ethnic lines in the city. I think that the relationship that Zeytin had with the young Syrian men who feature very prominently in the film was really moving because it was so clear after a while, especially in the desire that the young men had in acquiring more and more puppies and dogs to build their pack, that it gave them a sense of purpose. I think, on some level, it was about caring for another being despite how harsh their own circumstances were. They would often skip meals to feed the dogs.

I could also tell, had it not been for the dogs, those young men would have felt even more adrift in a city that was not yet their own. So, I found that was really poignant. In the process of integrating human encounters in the film, I really saw how deep and primal our relationship is to dogs — that we evolve with them and that we wouldn't be who we are without them and vice versa.

I was taking a look at some of the comments that I've seen about the film, and one that I saw posted on IMDB stood out to me: "Thank you for portraying the realities of being an Istanbul citizen. I live in the loneliest country in the World. Fear has sep[a]rated us from the rest." Do you see isolation as a theme in "Stray?"

Yes! When I set out to make the film, I thought to myself, "What was life like for a being that I thought of as having no love, no status and no security?" because they're not owned by any humans. But what I found was that these stray dogs are living life on their own terms and they have transitory love in their own ways.

They have bonds and friendships with dogs and humans alike throughout the city, that are entirely their choice. But I did notice, and I think dog behaviorists will say this, dogs are different from wolves in that they don't have pack structures and hierarchies and deep bonds with other dogs that last a lifetime. I saw that very much in Zeytin's life; she was quite solitary. She would have friends that come by, and then at the end of the day, she would be alone. And I don't know what to make of that, exactly, but it was just the way her life was.

Your film will inevitably draw comparisons to "Kedi" since both films portray stray animals in Turkey. How do you feel about them being discussed as companion pieces?

I feel like the basic spirit of the films is very similar, in that they're both celebrations of stray culture, and the unique place that stray animals have in Turkey.

For me, as an outsider — to both this culture and the way that they relate to stray animals — I was really struck by it. It was so unordinary to me, and it challenged  my own views about what a humane city really is, and what it means that our own cities like in New York, London, or Hong Kong, that they're void of other life forms, outside of the ones that you you are privileged enough to own and whether they should be owned at all, so I really wanted to capture that for audiences.

I know a lot of Turkish people probably disagree, but I do think the status of stray dogs is always vulnerable, and that any sort of marginalized population can be scapegoated overnight.

I feel like in capturing this, those dogs that exist today in Turkey because people fought for their rights to be able to roam freely on the streets, that they're these walking testaments to human mercy, and also non-human resilience. So every stray dog there is, to me, a miracle that I wanted to portray, and I'm sure it was the same in "Kedi." All those cats that are celebrated and individualized in that film and you could probably make a film about every single stray animal in Turkey.

"Stray" is now available in select theaters, digital and on demand.