Biden's stimulus bill gives progressives a big win. Now they must celebrate it

Losing the fight to up the minimum wage upset progressives, but the big picture view should leave Democrats hopeful 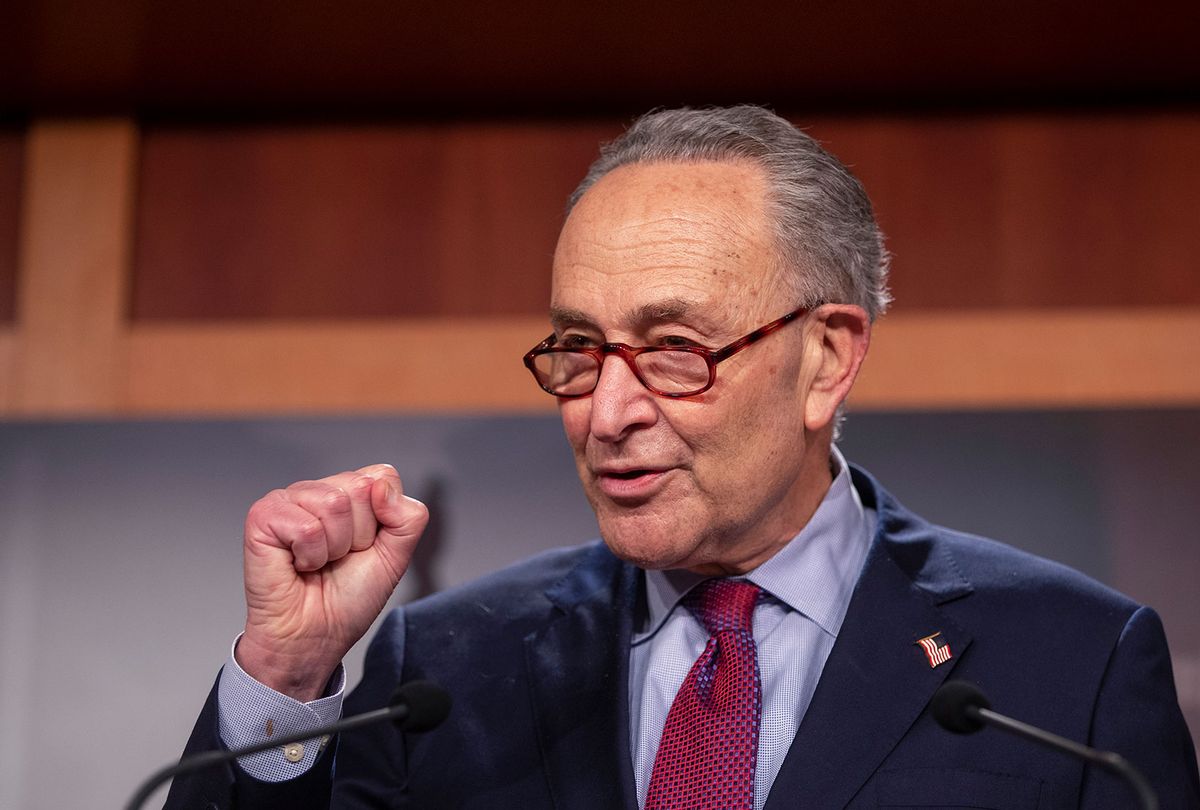 U.S. Senate Majority Leader Sen. Chuck Schumer (D-NY) speaks to the press at the U.S. Capitol on March 06, 2021 in Washington, DC. The Senate passed the latest COVID-19 relief bill by 50 to 49 on a party-line vote, after an all-night session. (Tasos Katopodis/Getty Images)
--

During the Senate debate over the coronavirus relief bill and in the hours after it finally passed, I was angry.

I was angry at Sen. Joe Manchin, D-W.Va., for reducing the size of unemployment checks from $400 to $300 and moving up their expiration date for no other apparent reason than his egotistical need to flex his power. I was angry at the eight Senate Democrats who voted down a $15 minimum wage, and especially angry at Sen. Kyrsten Sinema, D-Ariz., for doing a jaunty little hip dip while she did it. I engaged in text chains and Gchats with friends, expressing our anguish and outrage about all of this. The anger from progressives may seem outsized, as it certainly drew a lot of accusations on social media that the left reflexively hates everything the Democrats do, no matter what. And no doubt, there are a large number of grifters in the media — and their gullible followers — who brand themselves "leftists" but mostly just exist to undermine Democrats at every turn. But most people who were upset by these setbacks on unemployment and the minimum wage aren't kneejerk Democrat-haters. They are deeply worried about the future of the party, correctly believing that a failure to pass important bills on voting rights, worker's rights, and other big-ticket issues will open the door up to big Republican wins in 2022 and 2024 — and that Republicans will use those wins to rig elections to ensure permanent minority rule.

The fight over the coronavirus bill, and the immense power demonstrated by a small number of conservative Democrats, leaves progressives worried that Democrats aren't going to be able to get it together in order to do what needs to be done to save their own party. But, as someone who shares those worries, I can safely say that, for the first time in a long time, there's also good reason for progressives to feel hope about not just the progressive agenda but about the future of the Democratic party.

While the window to save the party and save democracy is still perilously short — and senators like Manchin and Sinema still seem blind to the real dangers here — the chances that Democrats can pull the country out of the tailspin have quietly moved from "nearly impossible" to "likelier than you get a vaccination appointment on your first try."

To explain the concerns progressives have, it helps to understand that a lot of folks started to see the debate over the coronavirus relief bill as a proxy for the larger fights ahead, many of which are going to be centered on the need to overturn the filibuster. It is not hyperbolic to say that saving democracy depends on ending the filibuster as we know it. Without that, Democrats can't pass either popular bills or bills, like the For the People Act, that are critical to protecting voting rights. So watching Manchin and Sinema continue to undermine progress causes progressives to worry that these two are simply never going to get to the point where they admit that stepping on the ability of Democrats to pass popular legislation is a stupid idea. However, taking a step back, it becomes clear that actually, there's a great deal for progressives to be excited about in the passing of the American Rescue Plan.

As Senate Majority Leader Chuck Schumer said Saturday, "If anyone thought it was going to be just a smooth path without any bumps in the road, they don't know how big and important this legislation is and how diverse our caucus is." And yet progressives got most of what they wanted. New York Magazine's Eric Levitz had a great Twitter thread about this:

Heralding the historically progressive nature of the legislation is critical because, as Levitz suggested, relentless Eeyorism from progressives about Democrats will drive down voter turnout — and therefore make it even harder for Democrats to get elected to pass more progressive legislation in the future. Celebrating wins is even more important than criticizing failures if the goal is encouraging Democrats to fight harder for progress. (Which, needless to say, should be the goal.)

Just as importantly, the bill's strength is proof of the power of progressive organizing.

As political scientist Scott Lemieux noted at the blog Lawyers, Guns and Money, "this is far beyond what my most optimistic projections of what the first (or any) major bill to hit a President Joe Biden's desk would look like." When Biden first proposed a $1.9 trillion bill, the assumption in most of the punditry was he was going big with the expectation that compromise would chip it away to a smaller number. The changes allowed turned out to be far more minor than expected, which is something like a miracle. That Biden, who spent most of his career as a cautious centrist, shepherded such a bill is beyond what anyone would have predicted a year ago.

Just as importantly, not a single Republican voted for the bill. This is proof that the fantasy of bipartisanship, which was motivating Sinema and Manchin's love of the filibuster, is DOA.

As Dan Pfeiffer wrote in his newsletter last week, "Joe Biden's American Rescue Plan is shockingly popular" and "Republicans are deciding to take no ownership of that success" that will be evident in "the collective euphoria we will all feel when we can gather together again." In other words, if this bill couldn't chip off a Republican vote or two, no bill can. And so, as Heather "Digby" Parton writes at Salon Monday morning, both Manchin and Sinema are already softening their pro-fiilbuster stances, indicating that they are open to "reform" that allows them to say they "saved" the filibuster while removing most, if not all, Republican uses of it. What seemed impossible a week ago — that actual bills to save democracy, protect the environment, etc. would get a floor debate in the Senate — now is coming into view. And that's huge!

Not that that's any reason for progressives to turn down the heat. It may not seem like it, but time is rapidly running out.

Realistically, most pieces of substantive legislation probably have to pass this year if they have any chance since members of Congress are going to be distracted by their campaigns in 2022. The fight over the filibuster and passing needed reforms must happen sooner rather than later, or it will never happen at all. There's still a great deal of reason to worry that Democrats aren't going to unify and do what needs to be done in the short amount of time they have. But for the first time this year, there's hope. And that should be enough to convince everyone to keep the pressure on for the real change this country sorely needs.