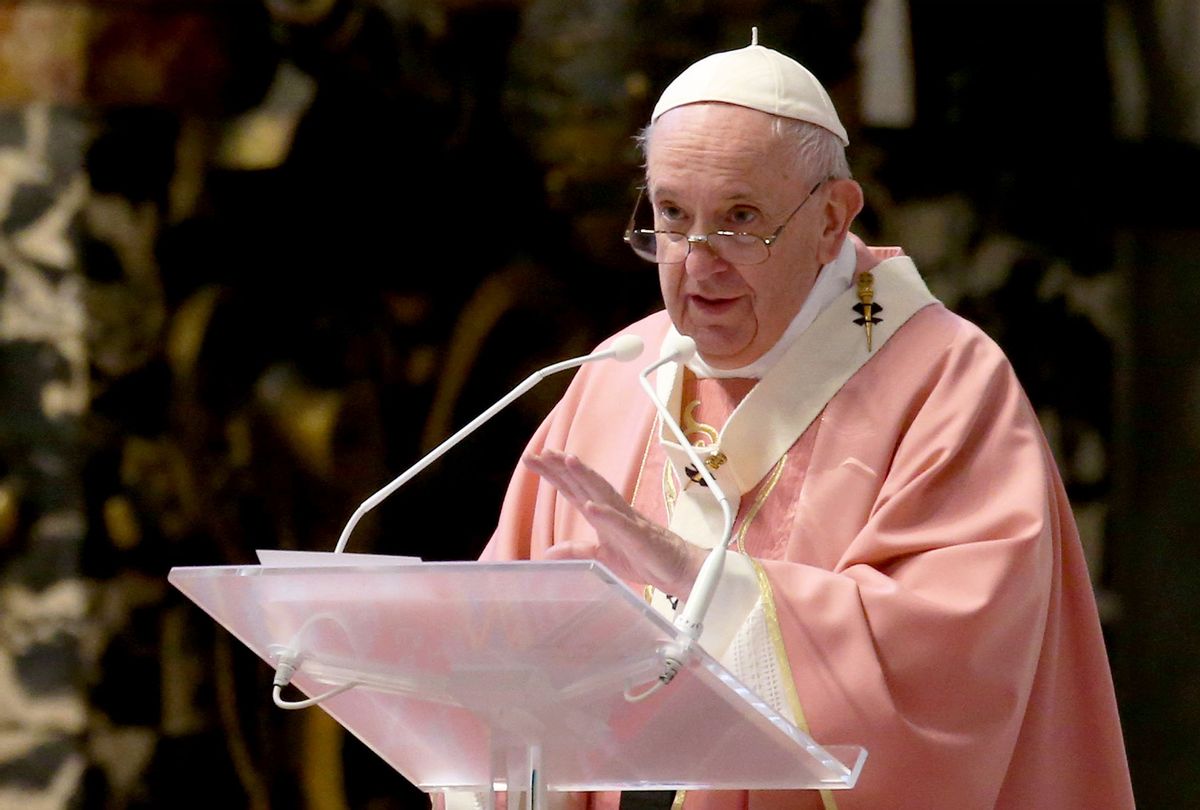 On Monday, the Vatican declared that the Catholic Church won't bless same-sex unions since God "cannot bless sin." For Billy McEntee, a queer, progressive Christian who grew up Catholic, the announcement wasn't surprising, though it was disappointing because there has been "so much hype and so many stories about Pope Francis' acceptance of the LGBTQ+ community."

"The Catholic Church, specifically, has long been at a breaking point and wrestling with dwindling numbers," he said. "I don't see how this current act of exclusion serves anyone."

As McEntee said, the Vatican's declaration comes at a time when the Catholic Church is struggling with a growing rift between conservative Catholics — who believe that marriage is a lifelong union between a man and a woman and that gay sex is, as the Vatican wrote, "intrinsically disordered"  — and progressive Catholics, who have been heartened by the Pope's endorsement of providing gay couples with legal protections in same-sex unions.

In a 2019 interview with Televisa, a Mexican broadcaster, Francis had said that "homosexual people have the right to be in a family. They are children of God."

He continued, "You can't kick someone out of a family, nor make their life miserable for this. What we have to have is a civil union law; that way they are legally covered."

It's important to note that Francis was speaking about his beliefs on what was legally appropriate in Argentina, where he had previously served as archbishop, as opposed to church doctrine — context that got lost when the interview appeared in a 2020 documentary and sparked headlines all around the world that indicated the Catholic Church perhaps finally had an LGBTQ-affirming leader.

The Vatican's most recent announcement, which came from its orthodoxy office, the Congregation for the Doctrine of the Faith and is co-signed by Francis, is an obvious attempt to completely squelch that hope.  "[T]here are absolutely no grounds for considering homosexual unions to be in any way similar or even remotely analogous to God's plan for marriage and family," the statement said.

Following the Vatican's declaration, the president of the conservative Catholic League Bill Donohue declared, "The door has been slammed shut on the gay agenda." However, many Catholics aren't content to accept this decision and are pushing back.

Francis DeBernardo is the executive director of New Wave Ministries, an organization that has sought reconciliation for the LGTBQ community within the Catholic Church since 1977. In an emailed statement, he said the Vatican's decision was "impotent."

"It won't stop the movement to bless such couples, and, in fact, it will actually encourage Catholics in the pews and the many Catholic leaders who are eager for such blessings to happen to work harder in their support — and blessing — of same-sex couples," DeBernardo said.

He continued: "Though Rome has now spoken on this issue, what the Vatican doesn't realize is that the Catholic faithful are not satisfied with the answer that they gave.  Catholic people recognize the holiness of the love between committed same-sex couples and recognize this love as divinely inspired and divinely supported and thus meets the standard to be blessed."

According to DeBernardo, a number of  priests are already celebrating marriages and unions between same-sex couples and that if this decision causes them to stop, "the Catholic laity will step in and perform their own rituals, gestures, and words of support."

"The fact that this discussion is well underway ensures that it will continue," he said. "The toothpaste is out of the tube and it can't be put back inside."

However, for many who were raised Catholic, the Vatican's continued marginalization of the LGBTQ community has encouraged them to find denominations and specific churches that are more affirming.

McEntee describes himself as a nondenominational Christian or, for more comedic effect, a lapsed Catholic. "I hosted a Lapsed Catholic sing-along for my friends because the Roman Catholic Church has a lot of issues, but the bops aren't one of them," he joked. He now attends St. Lydia's, a queer-affirming Lutheran dinner church in Brooklyn, and says that he has come to peace with the Vatican's views on people like him.

"And by that I mean it's no longer worth my sadness because I've found a queer-affirming church, St. Lydia's, where I don't need to stress about my degree of acceptance," he said. "I just feel for the people who are stuck in the Catholic Church and don't have other options like I do."

He recounts seeing a social media post several years ago by the photography and storytelling account Humans of New York that featured someone anonymously sharing that they were queer and didn't feel welcome at their church. McEntee saw the post and responded with the names of several churches he knew in New York City that were welcoming to LGBTQ members.

"Suddenly my Facebook messenger inbox was flooded," he said. "In the span of a couple hours, I was responding to dozens of messages from people from all around the world. People were genuinely surprised and inspired that I had found such a home for my faith, but many were also scared and upset that such a resource was not available to them. It was really eye-opening."