Catholics will control two branches of government. What does that mean for American Christianity?

The Supreme Court, and the incoming president, are testing their faith 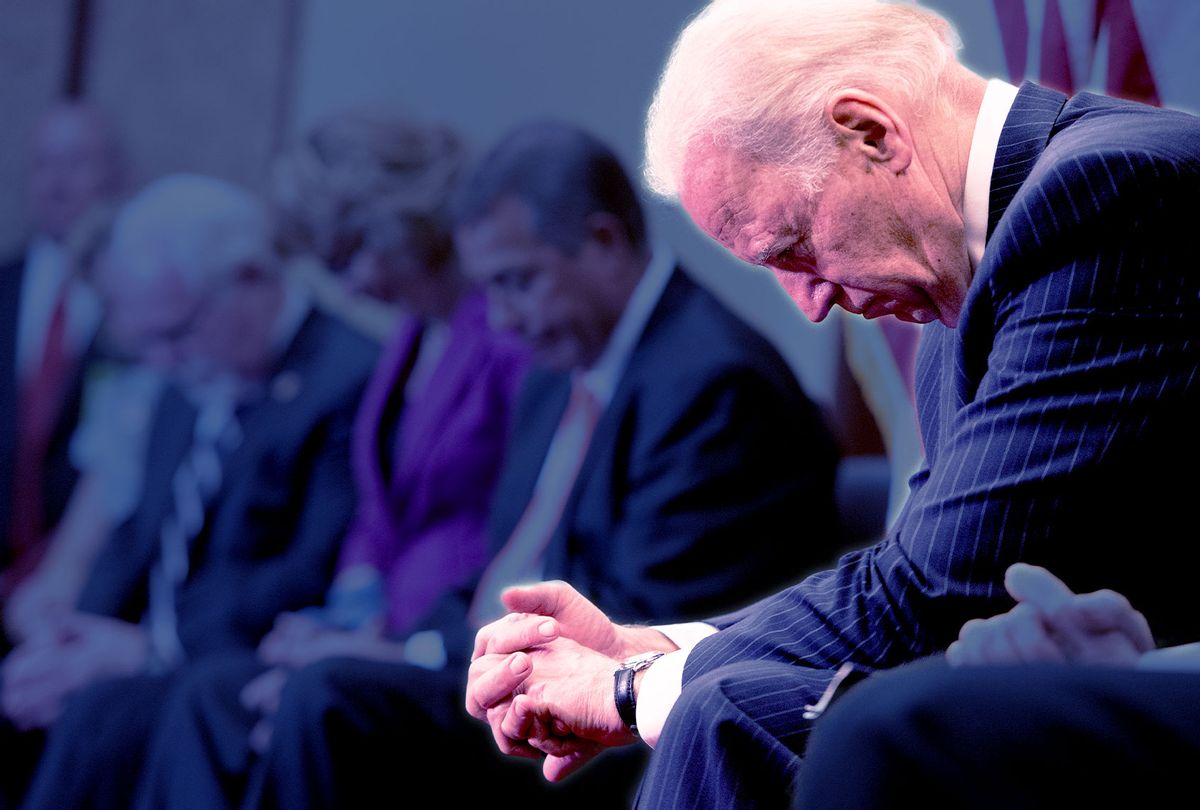 Catholicism is rapidly declining in our country everywhere — except in our government. A full thirteen percent of Americans — including me — identify as ex-Catholics. Church attendance is dropping sharply. But just last week, the Supreme Court flexed its newly-enhanced Catholic muscle. In little more than a month, Joe Biden will become only the second Catholic president in American history.

Religion has always been at the center of our politics. But it's never had such a decidedly Catholic bent.

The surprise SCOTUS decision late Wednesday, blocking restrictions on religious gatherings, was exactly the sort of Catholic-v.-Catholic showdowns we can expect to see more of from now on. The case pitted Roman Catholic New York governor Andrew Cuomo against religious institutions — including the Roman Catholic diocese of Brooklyn — over pandemic-imposed restrictions. And with Amy Coney Barrett joining a Supreme Court jam-packed with fellow Catholics like Brett Kavanaugh and Clarence Thomas, it is unsurprising the outcome tipped as it did. Writing his decision, Justice Neil Gorsuch — who was raised Catholic but attends an Episcopalian church — declared, "there is no world in which the Constitution tolerates color-coded executive edicts that reopen liquor stores and bike shops but shutter churches, synagogues and mosques."

These are the challenges that await the future president whose motto is "Keep the faith" and who quotes scripture in public remarks. Who counted among his earliest well-wishers fellow chill dude Pope Francis, and who carries a rosary in his pocket. And as with other notable Catholic leaders in whose footsteps he follows, President-elect Joe Biden's practice of religion and public duty will have something in it to piss off everybody.

There are two dominant Christian factions in American politics, both uniquely scary. There is no better illustration of the unsettling pair than in the partnership of Donald Trump and Mike Pence.

There are those like Trump, a lip service Whateverstant who clearly can't bear to be part of any dogma in which he's not the highest deity. Trump can grimly hold a bible outside of a church while his goons are bearing down on protestors; he can mangle Corinthians while speaking at Liberty University, asking, "Two Corinthians 3:17, that's the whole ballgame ... is that the one you like?"

But his is a Christianity of opportunity. He's a serial liar, adulterer and full-time bully, just like the ample number of other greedy hucksters in his collection plate-passing coterie. Christianity for these people is a means to an end, the end being tax exemptions and a base primed on fear and obedience.

Side-by-side with them are worshippers like Pence, a born-again evangelical whose mood board is just a list of dystopian novels. Pence is a man who reportedly won't dine alone with a woman he's not related to, has vowed to "see Roe vs. Wade consigned to the ash heap of history where it belongs," has supported "assistance to those seeking to change their sexual behavior" and whose seemingly sincere, apocalyptic faith helped worsen an HIV crisis in his home state of Indiana. He's part of formidable coalition of what we have called here recently "corporate theocrats," politicians willing to conveniently ignore the "Just be a kind, forgiving person" vibe Jesus preached and align themselves with charlatans to steamroller over basic human rights.

But then there are Catholics, unique in American politics and historically a much quieter voice. This is a nation, after all, founded by religious separatists, one that has historically cast a skeptical eye toward its Vatican-loyal citizens. When John F. Kennedy was running for the office, he contended with not only broad concerns that he "could not remain independent of Church control" but the directives of bishops who forbade their flock from voting for candidates who "disagreed with the Church."

Caught between a rock and a hard place, Kennedy thoughtfully declared two months before the 1960 election that "I do not speak for my church on public matters, and the church does not speak for me. Whatever issue may come before me as president — on birth control, divorce, censorship, gambling or any other subject — I will make my decision in accordance with these views, in accordance with what my conscience tells me to be the national interest, and without regard to outside religious pressures or dictates. And no power or threat of punishment could cause me to decide otherwise." It seems a good way to look at things, if you're an elected official.

Yet generations of fellow Catholic leaders faced the same dilemma of suspicion from one side and threat of punishment from the other. In 1990, New York governor Mario Cuomo provoked the wrath of John Cardinal O'Connor for his refusal to interfere with abortion rights. Politicians who help "to multiply abortions by advocating legislation supporting abortion or by making public funds available for abortion," he warned, "are at risk of excommunication.'' In 2004, Archbishop Raymond Burke of St. Louis announced that he would refuse to give communion to then–presidential candidate John Kerry for his pro-choice, pro–stem cell research stance. (He didn't seem to care that, unlike his opponent George W. Bush, Kerry opposed the death penalty.)

And in 2019, Mario Cuomo's son Andrew kept the family tradition alive, enduring clerical chastisement after expanding abortion rights in the state. Albany Bishop Edward Scharfenberger said that while excommunication was a last resort, "As the governor continues to distance himself from our communion, it may unfortunately result in that."

Joe Biden, who regularly attends Sunday mass, has come under similar pressure. Last year, as a candidate, the National Catholic Register said he "identifies as Catholic, but breaks with Church teaching." You mean, in governing non-Catholics?

Last month, Fr. Paul Scalia, son of the late Supreme Court Justice Antonin Scalia, issued a dark warning: "Increasingly, the only Catholics celebrated in politics are those who will toe the party line by acting actually against Church teaching on essential issues, who are willing to be Catholic privately — to have Christ as King privately — but not publicly." And across the country, priests have taken sides on whether Biden can receive communion, with Fr. Frank Pavone, national director of Priests for Life, advocating for "refusing the sacrament to politicians who not only support abortion but who advocate for taxpayer funding for the murder of children."

One particularly prominent voice, Los Angeles Archbishop José Gomez, president of the U.S. Conference of Catholic Bishops, earlier this month spoke out against politicians who undermine our preeminent priority of the elimination of abortion. Announcing the formation of a working group to deal with issues like Biden's support for the repeal of the Hyde Amendment, upholding Roe v. Wade and the restoration of the HHS mandate — the tenuous, oft-challenged provisions around healthcare coverage and religious exemptions —  Gomez opined, "when politicians who profess the Catholic faith support [these issues], there are additional problems."

Biden has not always been the most progressive on reproductive rights or women in general, but he has evolved. And he has shown over the past several weeks that he can definitely handle people not liking how he does things. Most important of all, he's affirmed repeatedly that the job of upholding the Constitution requires acting on behalf of all Americans, all of them, not just the ones who go to the same church as you.

Speaking on "Religious Belief and Public Morality" back in 1984, Mario Cuomo eloquently observed that "There are those who say… that by history and practice of our people we were intended to be — and should be — a Christian country in law. But where would that leave the non-believers? And whose Christianity would be law, yours or mine? This 'Christian nation' argument should concern — even frighten —two groups: non-Christians and thinking Christians." Which is actually most of us.

To be American and to be Catholic means to exist within two different belief systems and two different sets of rules. And those rules can be interpreted in wildly different ways, as our range of Catholics on the Supreme Court shows. Biden will no doubt at times contradict himself and disappoint his citizenry, but he does seem poised to practice a kind of political Catholicism that would seem entirely impossible to his predecessor and his ersatz Christian toadies, one that sees us as part of the same body.

And while the Catholic-weighted Supreme Court will fight for your right to crowd together at mass, the pope himself takes a different view. Writing this week, Pope Francis chided those still "refusing to keep their distance," and said, "It is all too easy for some to take an idea — in this case, for example, personal freedom — and turn it into an ideology, creating a prism through which they judge everything.... To come out of this crisis better, we have to recover the knowledge that as a people we have a shared destination."