Don't laugh at Mr. Potato Head: The right's culture-war obsessions are a threat to democracy

Do conservatives really think they can win elections on Dr. Seuss and Mr. Potato Head? They might not be wrong 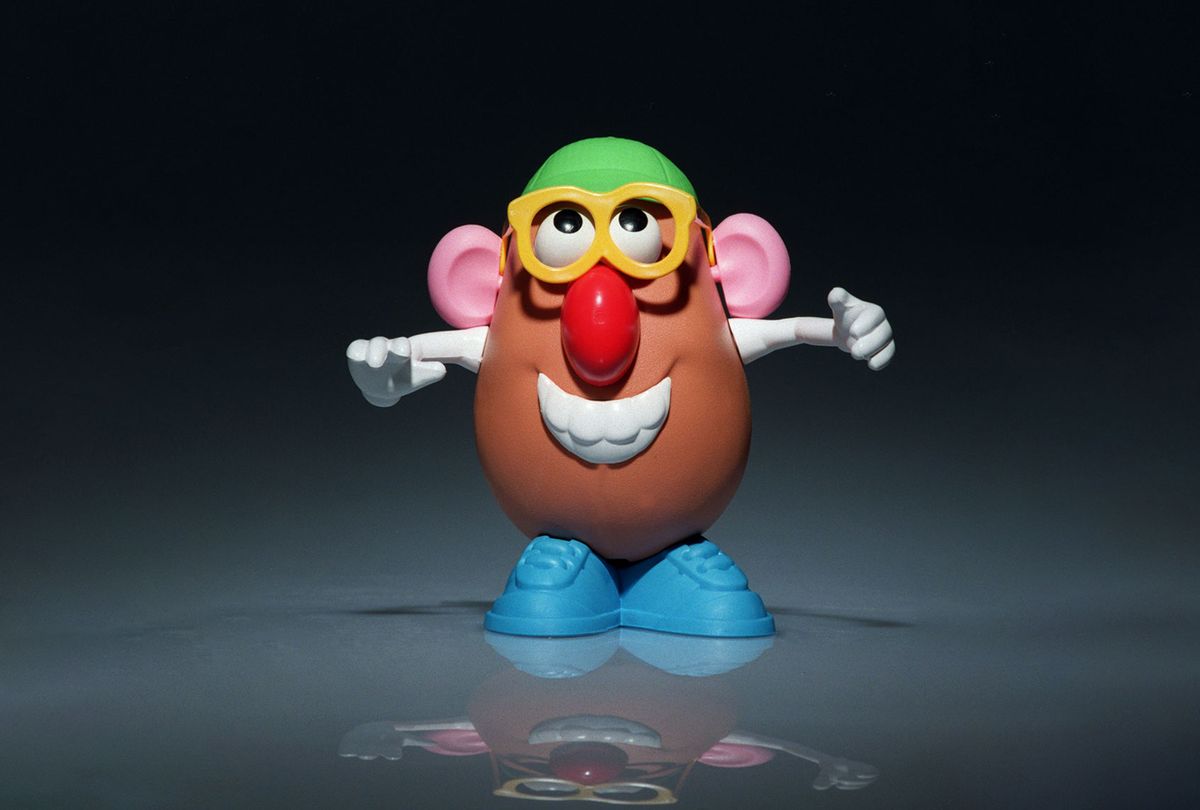 Sometimes it's not the wine inside the glass that is poisoned, but the glass itself.

The Republican Party and the right wing have a new obsession: "cancel culture." They hope to turn this into a winning political theme for 2022 and beyond.

In reality, so-called cancel culture is not new, it is part of a long history of a right-wing campaign to use culture war issues to distract the public so they can keep power and influence over American society.

The right's theory of cancel culture is organized around a claim that "liberals" or "progressives" or some other "un-American" and dangerous group is trying to overturn the country's "traditions" and "values." The defenders of these supposed traditional values are of course conservatives, who are depicted as being victimized, preyed upon and somehow oppressed and imperiled by these forces of cultural change.

In the most extreme examples, these outrages can grow into a society-wide moral panic.

The foundational premise of the right-wing culture war is that some kind of Other — sometimes named and delineated, sometimes unspecified — is trying to overturn "mainstream" (white) American culture and values.

The culture war(s) have a long history in American society. There were culture war battles in the 20th century about "black music" such as rock 'n' roll and its supposedly damaging influence on white young people. Comic books were targeted in the 1950s, because they were deemed to obscene and harmful to young people and society more broadly. In the 1980s, the roleplaying game Dungeons & Dragons was deemed to be some type of gateway to Satanism and cults. Feminists were supposedly going to brainwash young women and girls and turn them against the "traditional family." Socialists have been a long-running bugaboo, throughout the 19th, 20th and now the 21st centuries.

And of course, efforts by conservatives to control women's reproductive choices and control over their own bodies is a recurring cultural war battle across American history.

More recent right-wing wing culture war obsessions and delusions include denying LGBTQ people their full human and civil rights. America is supposedly a Christian nation, under siege by "secularists," "atheists," liberals and progressives who intend to ban the celebration of Christmas. Transgendered people are dangerous — predators who hang around in public bathrooms to molest children, or somehow "seduce" heterosexual men. Transgender boys and girls — but especially girls —should not be allowed to play sports because their presence will somehow contaminate other children.

As with other fascist imaginaries, the core narrative of Trumpism involves the leader and his followers defending and reclaiming the nation and its "traditional values" from dangerous, alien forces. This is a dangerous performance that often flirts with absurdism.

Recently, some on the right-wing became outraged that the venerable toy Mr. Potato Head is being "reimagined" as gender-neutral (although that is not nearly as true as they suggested). Some of Dr. Seuss' more obscure children's books, featuring offensive or stereotypical images have become another battlefield after the publisher — a private company, obeying the dictates of the market — decided to remove them from circulation. Mating racism, sexism and male insecurity (as well as a poorly-concealed desire for black women's bodies), right-wing bloviators — who somehow still have large media platforms, despite being "canceled" — have bemoaned and condemned Cardi B and Megan Thee Stallion's rap song "WAP."

Black Lives Matter and "woke culture" are also supposedly trying to destroy the lives of white conservatives, and other white people who do not surrender to "left-wing" political correctness. The New York Times' 1619 Project and critical race theory are indoctrinating young people and white people in general into "anti-white" beliefs. Antifa and other socialists or anarchists are supposedly everywhere, undermining America's true values.

At its core, the right-wing cancel-culture victimology narrative is an effort to deny human freedom and dignity to groups they deem to be undesirable and beneath them in the social hierarchy.

When racists and white supremacists shriek about being "canceled," their real anger is about being held accountable for their behavior, and at the revolutionary idea that nonwhite people are to be respected as equals to white people. Their rage at "cancel culture" is really a neat and convenient to laundering a desire for consequence-free speech and behavior.

Change that empowers groups and individual who were previously marginalized terrifies conservatives because it upsets their sense of natural hierarchy, group authority, and power. Moreover, the right to "cancel" in American society has historically been exercised almost exclusively by white people against nonwhites and other marginalized communities. Even a partial inversion of that power dynamic has created a world that many white conservatives (and others sympathetic to them) do not want to live in.

For those outside of the right-wing echo chamber, today's "culture war" and "cancel culture" anxieties are absurd. Those who complain about Mr. Potato Head, or Dr. Seuss books no actual children have read in 50 years, are to be derided. The adults in the room, "the serious people", are worried about COVID, the economy and other public policy crises. In this "mainstream" narrative, the rubes in red-state Fox News America are being tricked again. The fact that the right wing is resorting to culture-war appeals once again shows how badly they are losing. Joe Biden is winning by ignoring the right-wing troll-bait.

But there's a problem with this analysis. Members of the mainstream news media and other political observers (and the general public) who make such claims are underestimating the power of storytelling, emotions and systems of personal meaning.

In many ways, the culture war and "cancel culture" controversies are likely to be winning politics for the Republican Party and its allies.

At CNN, Herry Enten explains that Republican "critiques of 'cancel culture'" is one of the right's "best political plays":

While Democrats may mock them, the fear of cancel culture and political correctness isn't something that just animates the GOP's base. It's the rare issue that does so without alienating voters in the middle.

We can see this well in the 2020 American National Elections Studies' pre-election survey. This academic survey asks questions on a bunch of topics. This includes a question about political correctness, which, if anything, is a less extreme version of cancel culture.

Respondents were asked whether they thought people needed to change the way they talked to be with the times or whether this movement had gone too far and people were too easily offended.

People being too easily offended won by a 53% to 46% margin over people needing to change the way they talked.

Keep in mind, the voters in this sample claimed they had either voted or would vote for Biden over Donald Trump by a 53% to 42% margin. This just gives you an idea of how much more popular the opposition to cancel culture and political correctness is than the baseline Republican presidential performance.

A recent poll by Morning Consult and Politico shows that more Republicans had heard about the Dr. Seuss "controversy" than any other major issue, including President Biden's COVID relief bill. Cameron Easley provides these details:

Conservatives on Capitol Hill and in the media have devoted ample time in the past week to criticizing the overseer of Dr. Seuss' estate for pulling six books from publication because of their racist imagery. A new Morning Consult/Politico poll shows that messaging effort is resonating with the Republican base.

Nearly half (48 percent) of GOP voters said they'd heard "a lot" about the decision, according to the March 6-8 survey of 1,990 Americans, more than the share of Republicans who heard about any other news event tested in the poll, including the House's successful passage of President Joe Biden's $1.9 trillion COVID-19 relief bill (44 percent) on Feb. 27 and confirmation that former President Donald Trump and former first lady Melania Trump had been vaccinated for the disease (15 percent). …

Nonetheless, the attention paid to the decision reflects conservatives' confidence that a focus on cultural issues will help the party at the ballot box. Republican commentator Erick Erickson on Tuesday predicted that come next year, "more voters will remember Seuss when they vote than the COVID plan."

While that assertion remains in question, the latest poll's findings suggest that the most recent front in the culture war is registering with the conservative base.

The Republican Party and its right-wing culture war are also contributing to a public safety emergency in the United States. Law enforcement and other experts on domestic terrorism are warning that the Age of Trump has spawned a right-wing violent insurgency that will plague the country for years if not decades to come. To that end, a narrative about how "real Americans" and "conservatives" are being "canceled" is an integral part of a right-wing radicalization process where terrorism is the ultimate outcome. That radicalization process is occurring in plain sight.

There are several available examples. Consider that the theme of the 2021 CPAC conference was "America uncanceled."

On an almost daily basis Fox News and other right-wing propaganda media repeat the lie that white people are somehow being "replaced" in America by nonwhites, especially brown and Black immigrants.

The threat of "replacing" a person or a group is perceived as an existential one. Violence is then a legitimate form of self-defense, an example of natural law in action. When conservatives and Trump supporters are told by the right-wing news media, by their churches, by the QAnon cult and elsewhere that they are being "canceled," what is really being communicated is the need for (preemptive) violence against "liberals," "progressives," Democrats or the Other more generally.

Ultimately, if we laugh at the right's obsession with "cancel culture" we do so at our own risk, and at great risk to American democracy.