CPAC 2021: A school for indoctrinating and radicalizing right-wing extremists 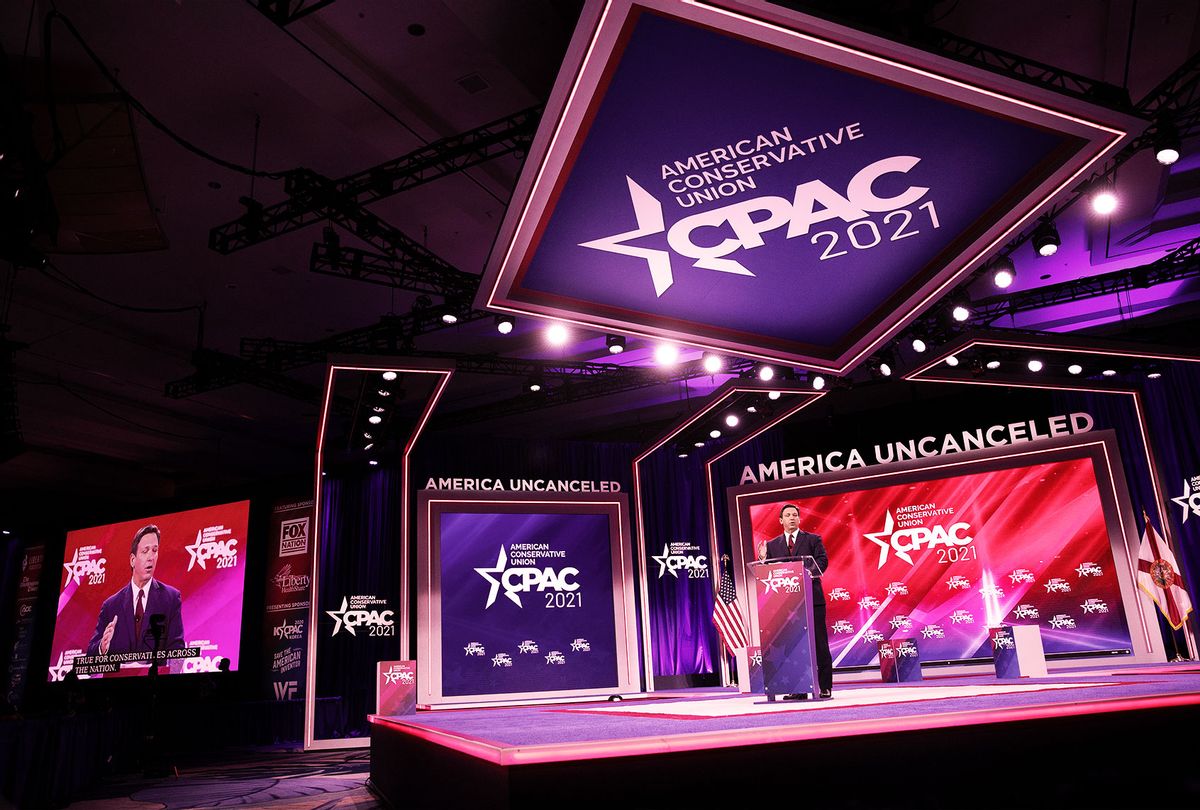 Florida Gov. Ron DeSantis speaks at the opening of the Conservative Political Action Conference at the Hyatt Regency on February 26, 2021 in Orlando, Florida. Begun in 1974, CPAC brings together conservative organizations, activists and world leaders to discuss issues important to them. (Joe Raedle/Getty Images)
--

This year's Conservative Political Action Conference (CPAC) was both a school and a celebration for right-wing extremists and other neofascists.

Donald Trump was the featured speaker. In that role, he delivered a speech consisting of lies about how the 2021 election was "stolen" from him and his followers. Trump further positioned himself as a shadow president, cult leader, demigod, prophet and kingmaker of the Republican Party, an organization he now hopes to purge of anyone who has dared to oppose him (even marginally or infrequently) by supporting democracy and the rule of law.

Today's Republican Party is now a de facto terrorist organization. Donald Trump, the twice-impeached president whom Senate Republicans twice acquitted for his crimes, is its leader.

Trump, a president who attempted a coup against American democracy that included a lethal assault on the Capitol, has not been broken, and is not behaving as if he had been defeated. At CPAC, he spoke in his role as leader of a violent right-wing insurgency, one which law enforcement and counterterrorism experts warn is continuing to gain momentum.

The danger from right-wing terrorists is now so great that the House of Representatives will not convene on Thursday this week because of credible reports that Trump supporters and QAnon cultists may be planning an attack.

In his role as featured attraction at CPAC, Donald Trump almost served as a distraction from the even more dangerous indoctrination into right-wing extremism which took place at the event.

That ground-level work occurred at CPAC's panels and during other discussions among attendees. Over the course of four days, CPAC attendees were told that America is (or should be) a theocracy, and that right-wing Christians are being "oppressed" in "their own" country. Attendees would also be further indoctrinated into hatred of LGBTQ people and others who are not white, Christian and heterosexual.

CPAC events repeatedly reinforced the "Big Lie" about the 2020 Election, spread the myth of Donald Trump's inherent greatness, paired with the narrative of his victimization by the "deep state" and "liberals" who "stole" the election from "real" Americans and "patriots."

The theme of the conference itself was heavy with meaning. "America Uncanceled" is a concept built on the fiction that white "Christian" Americans (meaning "conservatives", Republicans and Trumpists) are somehow existential threatened by liberals, progressives, nonwhite people, Muslims, Democrats, gays and lesbians, and other groups.

What does one do when faced with being "canceled"? Evidently, this means that normal politics are abandoned, and political violence is to be used against the "oppressors."

Because many Americans are blinded by American exceptionalism and the "disimagination machine" that unmoors the nation's culture and people from any substantive sense of historical continuity and responsibility — a trait made worse by the trauma of five years of Trumpism — there is a profound tendency to pretend that America's problems and challenges are somehow unique in the world.

Of course, they are not. Right-wing radicalization and extremism in the Age of Trump and beyond is following a pattern already visible in Islamic extremism and terrorism. The CPAC gathering and other parts of the right-wing extremist culture machine are among the primary places where such indoctrination is taking place.

Radicalization is commonly understood to be a continuum that involves various stages, and which may look like a pyramid or staircase. National security and terrorism expert Damian Szlachter offers this helpful description: "Radicalization is a process of adopting an extremist system of values combined with expressing approval, support for, or use of violence and intimidation as a method of achieving changes in society or encouraging others to such acts."

The radicalization process involves stages where an individual identifies certain personal grievances as being caused by "the system." They then start seeking ways to resist their unfair treatment (which may or may not objectively exist). Then comes the move to focus one's anger and aggression on some targeted group, and then to view the problem (and its solution) as a moral one involving "right and wrong," "good and evil" and "us versus them," as defined by the terrorist organization or movement.

Writing at the Lawfare blog in 2016, Benjamin Wittes and Quinta Jurecic offered the following prescient analysis, which merits lengthy quotation:

Here's a different frame with which to think about the Trump movement: We have a vigorous academic literature on the issue of radicalism and radicalization, some of which overlaps with the burgeoning scholarship on countering violent extremism. With five days left before Americans finish voting, we want to pose the question of what this literature has to teach about the Trump movement. …

But here's what we are saying: Trumpism, like the Brotherhood, is a political movement built on the mass mobilization of faith — in the one case religious faith and in the other case faith in a single charismatic individual. Like the Brotherhood, it is a movement that exists within an electoral system but which has a deeply ambivalent relationship with the democratic norms of that system, a movement which both formally rejects violence yet manages also to tolerate or encourage it. Recall that less than a week ago, Trump declared that "we should just cancel the election and just give it to Trump" and has suggested he will concede the election only if he "wins." And at the fringes of both movements are radicals, some of whom are violent. …

There's a simple measure for whether our basic theory here is, in a general sense, right: If it is, we will see a significant spike in white supremacist violence over the next few years. The Trump campaign has provided a baseline undemocratic ideation to hundreds of millions of people and also provided a platform through which extremists, both violent and non-violent, can recruit and cultivate. If our collective understanding of the process of violent radicalization is correct, the result will be blood.

Returning to these warnings and concerns three years later, in 2019, Wittes and Jurecic offered these observations:

The past few years have unfortunately provided a dramatic test of this theory; more unfortunately still, the theory has held up well. By nearly any metric, white supremacist violence is up significantly, the lethality of attacks has risen dramatically, and the link between the ideation and action has become particularly clear. President Trump plays a key role in this ideational cauldron — though pinning down the precise role of his rhetoric in any one incident is a mug's game. …

Something similar is happening here. No one incident can be laid at President Trump's feet. Yet when a president talks the way Trump talks over a long period of time, when he deploys rhetoric routinely that can be expected to stir the pot of violent extremism, when one can predict — as we did — prospectively the manner in which such rhetoric will interact with a political community and yield violence, and when violence then materializes in precisely the hypothesized fashion, it would be unreasonable to deny that there is a connection.

We certainly don't let the Muslim Brotherhood off so easily.

Of course, Wittes and Jurecic's analyses did not predict an attack on the U.S. Capitol by Trump's supporters. Recent public opinion and other research also echoes their concerns about Trumpists, Republicans and other "conservatives," who — in increasingly large numbers — support the use of violence to "defend" their notion of a "traditional" America.

At least 50 percent of Republicans believe that the 2020 election was stolen from Trump and that Joe Biden is therefore not a legitimate president. A new Gallup poll also indicates that a majority of Republicans want the party to either continue with Trump's neofascist agenda or become even more extreme. Other research shows that the Capitol attackers were not some isolated or fringe group among Republicans, but instead represented a broad swath of white and largely middle-class Americans.

Ultimately, right-wing extremism is a serious cultural problem in America, one that transcends naïve beliefs about the enduring health and stability of the country's democracy.

In response to such a political and social crisis, the American mainstream news media must learn new skills and frameworks to report on authoritarianism, neofascism, and other anti-democratic behavior by the Republican Party, its followers, the far right more generally and its entire ideological and cultural apparatus.

Most in the American mainstream news media, however, now that Biden is president, are continuing with the failed approaches that helped elect Trump in 2016 and then normalized his presidency.

The Democratic Party must abandon any efforts to find "bipartisan solutions" or "compromise" or "unity" with the Republican Party and its voters: Collectively, the latter are an increasingly violent, dangerous, anti-democratic and anti-human force in American life and politics.

To save itself, the United States needs to invest in projects aimed at rejuvenating civil society and the public sphere as well as teaching lessons of responsible citizenship and democracy that have been forgotten or willfully denied by tens of millions of its citizens.

Part of this process of defending America's multiracial democracy is to use all available means to defeat the right-wing terrorists who are actively working to recreate a new American apartheid or Jim Crow regime, echoing the one created by their white terrorist forefathers and foremothers. The United States must also institute a large-scale deradicalization program as a central component of its battle against right-wing terrorists and other extremists.

Do the nation, its leaders and its people have the courage and grit to do what is necessary to confront and defeat right-wing domestic extremism and terrorism?

Now is the time for a long-overdue reckoning, and an answer born not of political convenience but rather of imminent necessity.