For the love of all that is delicious, why don't we eat duck more often in this country?

Ariane Daguin, who founded the gourmet food purveyor D'Artagnan where duck is revered, teaches us how to cook it 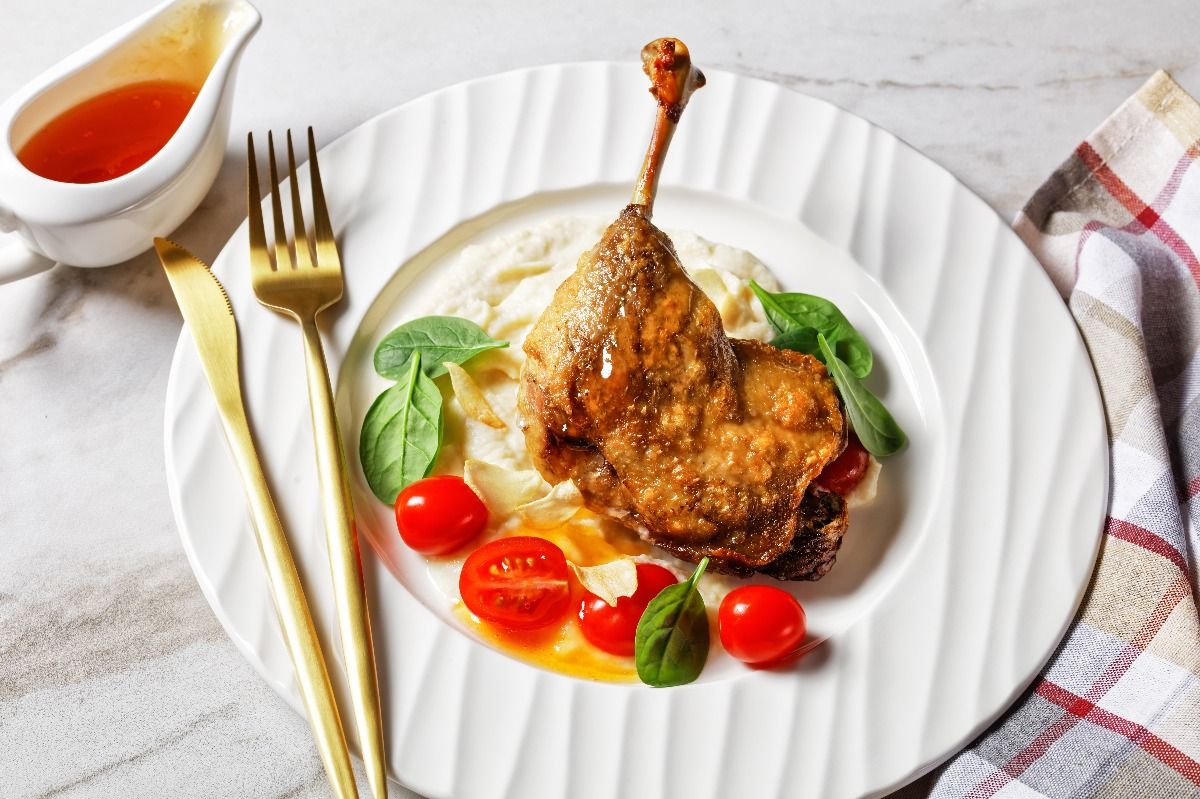 When's the last time you had a glorious duck feast? Mine was a few nights ago. Duck confit risotto, seared duck breast, duck fat roasted Brussels sprouts and potatoes, green salad with duck fat toasted croutons, duck foie gras, and so help me, duck fat sea salt caramels. All washed down with a wine from Gascony in southwest France, where duck is a staple.

It was one of the best things to come out of our kitchen — ever. Like, last meal-worthy. Our quarantine pod friends went nuts for it. The crisp, almost caramelized skin on the duck swaddling the melting, succulent fat on the inside satisfied one of the most primal urges in my body. Everyone — including our friends who didn't think they liked duck and our teen niece — had seconds.

Then why, for the love of all that is delicious, don't we eat duck more often in this country?

Since making the leap from a vegetarian lifestyle to full omnivore when I spent a couple of weeks in Gascony at author Kate Hill's Kitchen at Camont learning about all things duck several years ago, I've wondered why this poultry that's so celebrated in France and other parts of the world hasn't caught on here. I had theories, but I wanted to hear from experts, so I turned to Ariane Daguin, who founded the renowned gourmet food purveyor D'Artagnan where duck is revered. I then spoke with Aaron Schorsch, a student of food with a background in cultural anthropology, agriculture, cooking and food activism; he also leads culinary adventures to France and beyond at his company Saveur the Journey. 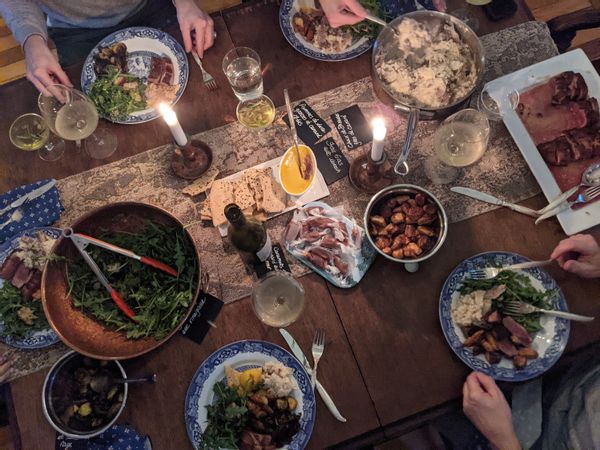 Was there one be-all, end-all reason? Consider it more of a perfect storm that has shut duck out of most American kitchens. To our great detriment, I would add, because a perfectly cooked duck is deliriously good.

Duck fat is called gold by everyone who knows its powers. The breast is as deeply, intensely flavored as the best steaks. ("Give me some more of that duck steak," my friend said, in fact.) Confit — leg slow-cooked in its own fat — is a dream. And grattons? The crispy skin cracklings left in the skillet after rendering the fat can make you weep.

You can't talk about duck without talking about the polarizing controversy that is foie gras, and that's an entire other story for another day — but we'll go there for just a minute. When I became an omnivore, I decided to learn to kill and process a chicken at a local farm. It was important that I didn't look at animal flesh as a plastic-wrapped food product. Instead, I literally looked the fact that it was a sentient being in the eye. Before I ate the maligned foie gras — liver of a fattened duck — I visited a French farm where the ducks — happy until their last moment — waddled around nonplussed by the gavage process of the act dubbed force feeding.

The overwhelming feeling I left with was to wonder why foie became the devil when actual atrocities like factory farming exist in the world. With no gag reflex, a hard esophagus anchored by a sac to catch excess grain and an instinct natural in their species to gorge themselves before migrating, the pastured ducks didn't appear to give a whit about the momentary process. And, like the Egyptians who originally discovered how amazing that engorged liver tasted when the self-fattened birds flew south for the winter, I became enamored. Don't @ me, especially if you eat chicken from a factory or feedlot cattle. Correctly prepared foie is the best butter in the world on steroids, but if you're going to confess to loving the dish, you may as well publicly share photos of yourself at a rave, sans mask during peak pandemic.

And it may just be that our collective repugnance of foie gras — an easy target as a wildly expensive food for those who can afford it — is part of why we don't get to enjoy duck in this country, Schorsch said. Foie is the penultimate celebration food in France, he said, and if it's going to be produced in enough quantity to meet the demand, well, then you're also going to have duck breast, duck legs and all the other duck goodness. Without a demand for foie here — in fact with a vocal opposition to it — out of the gate we're not going to have as much duck. 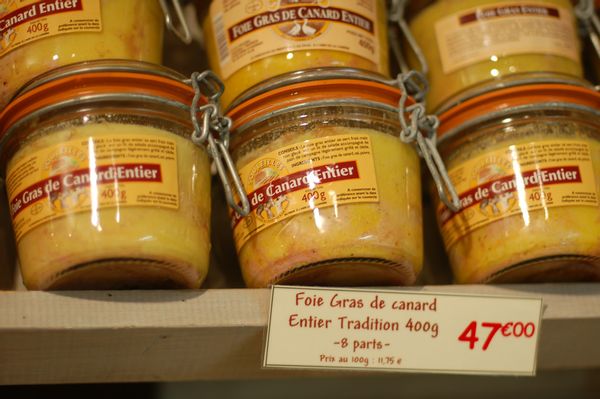 The gift shop at the Musée du Foie Gras at Ferme de Souleilles in southwest France is a wonderland of duck and foie gras goodies.

What we do have, Daguin said, is often, frankly, just not good. The industrialization of agriculture that followed WWII led to a genetically manipulated duck that was ready for slaughter more quickly — read: cheaper — but at the cost of taste, laden with watery fat as it was. Combine the inferior product with the fact that Americans moved from cooking food to heating TV dinners, and the delicious duck was doomed.

For those of us — myself included — who grew up either only ever having a poorly bred and raised, incorrectly cooked duck or none at all, it just never became part of our food imprinting, Schorsch said. I saw this at my own table when a friend of my niece's refused to try a divine cassoulet (a duck and bean stew) — insisting they didn't like it, even though it would have been their first time ever eating duck.

Luckily, my adult friends were more willing to experiment, even with having had markedly bad experiences eating duck before. Over the course of that duck extravaganza, they became converts, lapping up foie like cats at a saucer of cream and requesting containers to take home leftovers.

But even for those of us who know and love duck, it's still considered something of a fringe meat, Schorsch said. It's not like you can walk into your closest grocery and pick up a bag of premade confit like you can in a French market. When we're feeling ambitious, we get a whole duck from our local butcher and break it down. For this particular meal, I got the goodies shipped from D'Artagnan — individually-packaged Moulard breast, legs already confited, a terrine of foie, and a tub of fat. (Which also prompts the question: Does our nation's abhorrence of fat send us running from a meat so luxuriously endowed with fat?)

I also have to wonder if it would be such a specialty item if duck had ever had a marketing campaign behind it like more popular animal products. What if we'd had Duck: It's What's For Dinner? Or Duck: The Other White Meat (except it's red)? Eat More Duck? Got Duck? 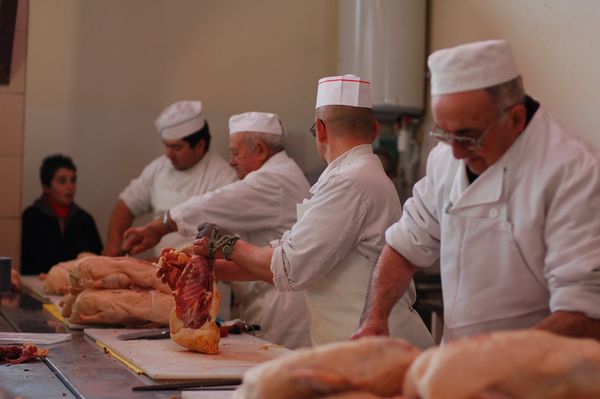 Would it be so expensive (the last whole duck I bought rang in at $65, and the D'Artagnan duck breasts cost closer to steak prices than chicken) if our government-subsidized duck farms in the way they prop up, say, commodity corn for the beef industry? If Americans spent as big a percentage of our incomes on food as other countries, would that matter?

I don't think I can get to the bottom of this with any one or even handful of reasons, and I'm left with more questions than answers. In spite of it all, maybe duck's day is coming. The popularity of duck is rising enormously, especially as people become more concerned with the quality of their ingredients, Daguin said. And perhaps with so many of us cooking exponentially more over the last year and looking for new things, I wonder.

But even if we find a great source for duck, we still need to know how to prepare it properly. "It's greasy," was a complaint my friend had about his prior duck experiences. For others, Schorsch said, they "have been turned off to duck because they bought one, and they cooked it like a chicken . . . The legs were tough, the breasts were dry, and it was a bunch of flabby fat." Gross.

So what's the right way? I'll leave you with Daguin's very precise advice for cooking a breast. We'll start there, because it's the easiest part to cook, she said.

"It has its own protective foolproof technique of cooking," Daguin said, "which is that natural layer of fat on top." You still need to cook it on the skin even if you don't like the fat and you're not going to eat the skin. (Quelle horreur, I would say!) That's what's going to make it cook properly, she explained. 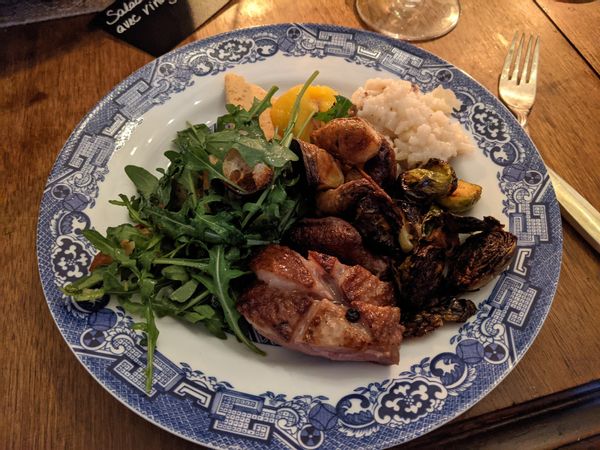 Score the skin in little squares in a bias. "That, one, will make it nice," she said. "But two, that will get the fat that is inside that skin to render more, and so the skin, little by little, will become very nice and crisp."

Put the breast skin side down in a pan on low heat, salt and pepper the flesh side on top, and basically let the fat melt. No need to add anything to the pan, since the fat is built in — you're not searing it here. Pull the fat from the pan as it renders, and after eight minutes, "you should have a perfectly crisp skin," she said, and "you should have liquid gold on the side, which is your duck fat that has rendered and that you want to cook your potatoes in because there's nothing better in the world than potatoes cooked in duck fat."

Next, Daguin said, "put your fire at the maximum, and you flip it so the breast is on the flesh side. You're going to go at the maximum heat, searing it very fast for another four minutes."

These instructions are for a one-pound Moulard breast, "the nice, big fleshy breast." For a smaller portion, go six minutes on the skin and three on the flesh, she said.

Remove the duck from the pan, and this is the most difficult part (because you'll want to devour it!). "You have to let it rest," she said. "Please, let it rest, because, one, it continues to cook inside when you do that, and it finishes cooking, to the center, and two, the juices kind of reintegrate with the muscle. So it's very important to rest for three minutes on that cutting board or that plate." Put it somewhere warm, maybe on top of the stove while it rests, then slice it on the bias and serve immediately.