In Israel and Palestine, vaccines stop at the border wall 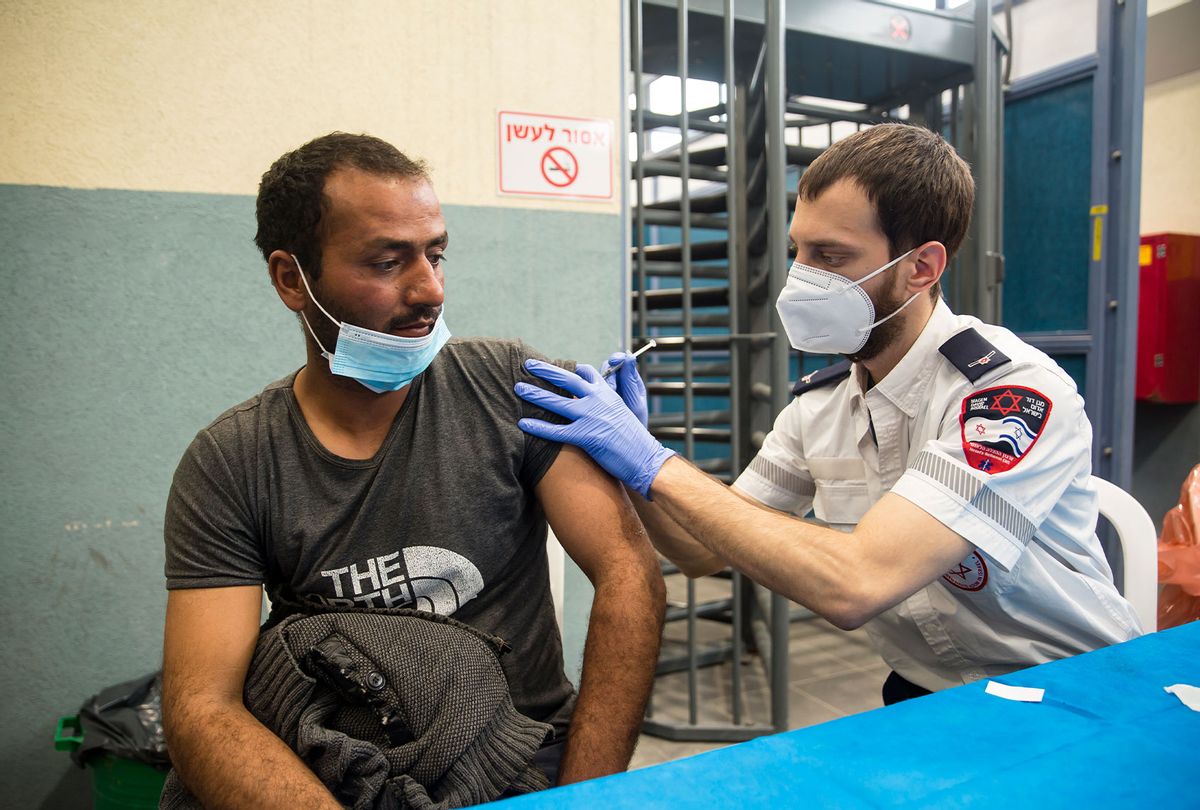 A Palestinian man who works in Israel receives the first dose of a Moderna Covid-19 vaccine by an Israeli medical worker in Meitar crossing checkpoint between the West bank and Israel on March 9, 2021 in Meitar, Israel. More than two months after starting a world-leading covid-19 vaccination campaign for its own citizens, Israel began administering the Moderna vaccine to Palestinian laborers from the West Bank who enter Israel or Israeli settlements for work. More than 100,000 Palestinians work in the country and its settlements. (Amir Levy/Getty Images)
--

Michael Che, the sardonic political commentator who co-hosts the iconic "Saturday Night Live" segment "Weekend Update," was accused of anti-Semitism last month when he joked about Israel's claim that it had vaccinated "half" of its population.

"I'm going to guess it's the Jewish half," Che cracked.

Yet even as groups like the Anti-Defamation League (ADL) claimed the quip had "crossed the line" and accused it of "playing into an antisemitic trope in the process," Sari Bashi couldn't deny that she saw the dark humor in Che's observation.

"I thought it was very funny," Bashi told Salon. Bashi is the Research Director at Democracy for the Arab World Now (DAWN), an organization launched to continue the vision of Jamal Khashoggi, a journalist and advocate for Middle Eastern democracy who was assassinated by Saudi agents in 2018. She also told Salon that Che's observation was fundamentally correct: Although Israel has had one of the world's fastest vaccine rollouts, Israel's Jewish population has been prioritized over Palestinians.

"The Israeli system is highly centralized," Bashi added. "There is universal health coverage for citizens and residents. The distribution system is very efficient. It's a small country. There are lots of reasons why the Israeli government is in a very good position to vaccinate a lot of people quickly."

The problem, fundamentally, is that the Israeli government does not treat Palestinians as equals. Jewish Israelis are prioritized and, as a result, vaccines are being distributed in an unequal and unjust way.

Omar Shakir, the Director for Israel and Palestine at Human Rights Watch, pointed out to Salon that the Israeli government has primary authority across Israel, which includes the occupied territories of the West Bank, the Gaza Strip and Western Golan Heights. This means that, whether they admit it or not, the responsibility falls on the Israeli government to inoculate all Palestinians against the COVID-19 pandemic.

"It has excluded the nearly 5 million Palestinians who live in the West Bank and the Gaza Strip under Israeli occupation," Shakir told Salon. "The Geneva Conventions and the law of occupation more generally is quite clear that an occupying power has the duty to provide ensure medical supplies, including those needed to deal with a pandemic." Despite these rules, the Israeli government has only made a few exceptions to its general approach of not prioritizing Palestinians.

"I think this is really speaks to the heart of Israel's discriminatory rule," Shakir added.

The problem is not one of whether or not they're able to do it. In fact, when it comes to its Jewish population, Israel has been a model of efficiency. If not for its apartheid policies, it could serve as an example for the rest of the world to follow. Even as Israel celebrated its 5 millionth vaccination earlier this month, Palestinians continue to significantly lag behind Israelis in inoculations. The Israeli government only began launching a vaccination campaign for Palestinians working in the country and living in the West Bank two months after they had their blitz for its Jewish population.

"It's not at all a logistics issue. I must say," Ran Goldstein, executive director of Physicians for Human Rights–Israel, told Salon. "It's all about the politics of the regime and the occupation policy of Israel. It's a political decision not to transfer vaccination to the Palestinians." As Goldstein put it, the Israeli government simply does not accept that it is responsible for its Palestinian citizens, even as it will prioritize Jews who live right across from them in the West Bank.

"It's the nature of the occupation, which create a situation when one person in the same geographical area has all the rights, while the other one has no rights," Goldstein explained.

This is just the latest example of how Israel mistreats Palestinians. As Shakir pointed out, "the gradations of repression vary" depending on whether a Palestinian lives in the Gaza Strip, the West Bank or within Israel's official borders. The restrictions range from travel bans and discriminatory access to vital resources (like water and land) to whether or not a resident can vote or even be regarded as a legal citizen.

"A Jewish Israeli has a nationality that's different than a Palestinian," Shakir observed. "In all these ways, in the everyday reality of almost virtually every aspect of everyday life, Jewish Israelis are privileged and Palestinians are repressed."

As for the claim that Che's joke was anti-Semitic? Bashi rejects that notion. In fact, she finds it ironic that some of the people most adamant in characterizing criticism of Israel as anti-Semitic — including President Donald Trump — have actually been guilty of the genuine article.

"Governmental policies are legitimate of material for discussion and criticism," Bashi noted. "That's not because the government officials that we're criticizing are Jewish. It's because they're making decisions that are racist, that they're being criticized. I think it's also ironic that a government led by somebody who defended white supremacists marching and shouting 'The Jews shall not replace us!' is now trying to tell me and you what anti-Semitism is. I don't accept that."

As for Israel, Bashi thinks the government should come to its senses — if not for humanitarian reasons, than for the sake of Israel's Jewish community.

"Don't forget that Israelis and live among each other," she pointed out.