Everything you need to know about cascatelli, the new "perfect" pasta shape that's a viral hit 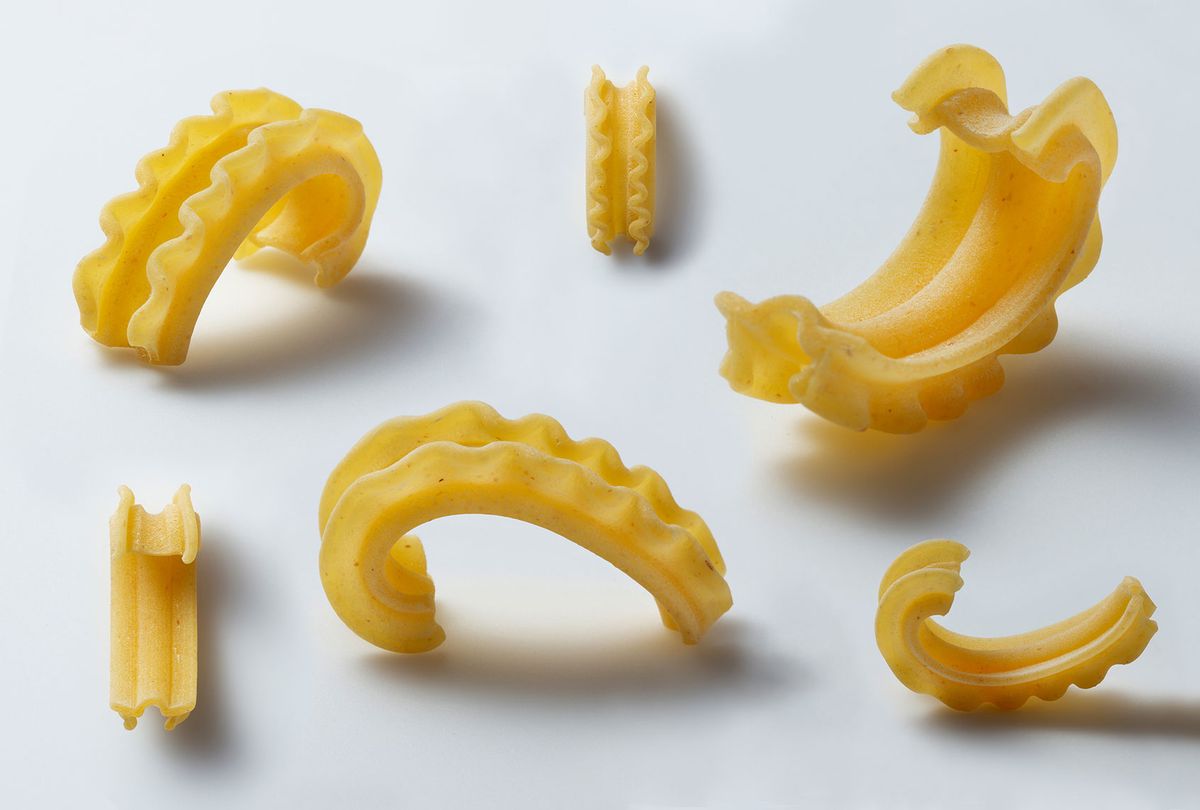 Several years ago, Dan Pashman, the host of the James Beard and Webby Award-winning "Sporkful" podcast, decided to make a new pasta shape. And not just any pasta shape. Pashman wanted to make the ideal pasta shape. It needed to have the perfect bite, an appealing texture and hold the right amount of sauce. Sounds simple enough, right?

Well, Pashman's new series of five "Sporkful" episodes, titled "Mission: ImPASTAble" tells a different, very funny and very informative story. Through the series, Pashman takes a trip to the Pasta Lab at North Dakota State University; has a number of heated debates with food professionals, including "The Splendid Table's" Francis Lam, about existing pasta shapes; and has a conversation with Giovanni Cannata, the only pasta die maker working in America today.

"There were so many emotional ups and downs," he told Salon in a recent interview. "You will hear my wife running out of patience with this whole mission. My kids are part of it. I'm literally brought to tears on more than one occasion. You will learn a ton about how pasta is made, why this project took nearly three years and you will laugh hysterically, because a lot of things go wrong in very, very funny ways."

In the end, it seems like the journey was worth it. Pashman's new shape is called "cascatelli," which means "waterfalls" in Italian, and it made a big splash in the food world since its release earlier this month. Distributed for $4.99 per pound by cult-favorite American pasta maker Sfoglini, it's currently sold out.

"We're so grateful for the incredible response to our new pasta shape!" Sfoglini's website said. "Due to overwhelming demand, orders placed now for Cascatelli will ship in approximately 10 weeks. We really appreciate your patience. We promise it'll be worth the wait!"

In the meantime, Pashman spoke with Salon about the process of making a better pasta shape, the three qualities by which he judges existing noodles and his trip to the Pasta Lab.

I guess we should start from the beginning. When did you wake up and decide, "OK, we need a better pasta shape?"

Well, I listened to some of the seminal podcast series of the mid-2010s, in particular the "Planet Money" T-shirt series and Alex Blumberg's "StartUp" series. These kinds of multi-episode things that were so seminal at that time like "Serial." And I thought, "Someday I want to do my version of this."

You know, as a creative person, you hear other people do cool things in your field, and you know you want to try to do that someday. The obvious thought was, "I should create a food," but then what should the food be? I had a couple of criteria: I wanted it to be a simple, basic food that everyone knows, loves and has opinions about. I didn't want to do something that was like a fancy specialty ingredient. The next thing: I wanted it to be a food that was inexpensive and shelf-stable that could be shipped all over the country, if not the world, because I wanted as many "Sporkful" listeners as possible to participate in the end product and be part of it.

So, pasta — even a somewhat expensive pasta — is an affordable luxury for a good number of people, and it met those criteria. And pasta shapes just felt like a thing that just not that many people think about and I felt like it was ripe for innovation. And one of my favorite parts of hosting the "Sporkful" podcast is that when I sort of nerd out in ridiculous detail about the finer points of a specific food, one of the reactions I felt that I love is someone will say, "I never knew I had such strong opinions about that."

I think a big part of that, too, is developing a language to talk about what we like or don't like about something. For example, there are three qualities that you use to talk about pasta shapes. Could you talk a little bit about them?

I think there are a lot of shapes that are really good at some of these things, but very few nail all three. I think one of the hilarious parts of this series — if you listen to all five of the podcast episodes, you have these recurring characters who start using these words more and more without me having to tell them. It's entering the vocabulary of the people around me, and it's very hilarious to me.

Could you tell us about your trip to the Pasta Lab at North Dakota State University?

I mean, it was a ton of fun. I knew early on that I wanted to go there. I loved the idea of starting the journey in North Dakota, because it does not feel like the most obvious place to start a pasta story. But that place is a trip. I mean, they know all about durum wheat. They could talk about durum wheat for years before running out of things to say.

So, North Dakota is where most of the durum wheat that ends up in pasta is grown. And they said they're always developing new varieties of durum wheat at the Pasta Lab at North Dakota State University. So, I got to meet the whole research team that works there and see what they're cooking up in the lab.

They're literally cooking pasta in beakers — you know, there's test tubes, and they're wearing lab coats. If you were to write a sketch called "Pasta Lab," this is what it would look like, but it's actually real. The most incredible thing they have is something called a texture analyzer, which measures bite force, or the exact amount of pressure required to bite through, say, five strands of spaghetti and whatever pasta you put into it.

I was just super excited to see it in person. And I was like, "Oh, my God, will you test my pasta in this machine when I have some?" And they were very happy to — they're like pasta nerds.

So, this is a two-part question. Going back to those three qualities — 'forkability,' 'sauceability' and 'toothsinkability' — what was an existing pasta shape that you thought got close to being ideal when it came to those? And what was the process of building upon that?

So, early on, I just set out to eat every pasta shape to get my teeth on. I went all around the New York metro area to specialty stores, and I got as many obscure shapes as I could. I was eating and eating and eating all different shapes. Some of them I had before, but I wanted to get them all in a kind of rapid succession and really catalog the attributes. Do I like ruffles? Do I like straight edges? Do I like ridges? Tubes? Long? Short? Curls? Twirls? All these different things.

Through all the shapes, one that I landed on that I really, really loved was one called mafaldine. If you picture a fettuccine noodle with ruffles down the edges, or like a lasagna but narrow enough to wrap around a fork. So, we liked that as a base canvas. Then another shape that I like was bucatini — and I used to be kind of anti-bucatini, but people go crazy for it. Then I had the realization that it's actually really great, so my initial idea was to combine the best of mafaldine with bucatini and a couple more flourishes — so ruffles and a tube component and a few other things. So that was how I went forward.

Right, so the resulting pasta — what is it like?

The shape is called cascatelli, which means waterfalls. I do want to acknowledge to the Italian speakers out there that I know the correct plural would be "cascatelle," ending with an "e," but I decided to take a little bit of poetic license, because the "I" sounded more like a classic pasta shape name.

I would describe the shape overall as a curved comma or half a heart. On one side there's ruffles, and in the space between you've got a dugout, kind of a half-tube that just traps sauce in there. It's amazing.

So, a potentially controversial question, but what pasta shape do you think is overrated?

Well, as I say in the podcast, spaghetti right off the bat. I know it's iconic. I know that it's historically important, and it's the original pasta shape. But that also means that it's kind of primitive. It's just a tube that doesn't do anything, so it doesn't hold sauce especially well. It has a very low surface area in relation to volume. It's not very tactile, and you can't really sink your teeth into it. You can twirl it on your fork, and that's fine. But you'll get danglers splattering, and it's just not that great. I feel kind of the same way about linguini.

Like, if I'm going to have long shapes, fettuccine is so much better than spaghetti or linguine. The best-known shapes are often the ones that have been around the longest and have been mass-produced the longest. So, I think that there is room for new ideas to come along and new perspectives. That being said, I'm not here to destroy the classic pasta shapes. I love pasta. I'll eat any pasta you give me, and there's room in the world for many pasta shapes to coexist.

If folks are curious about the full story behind "Mission: ImPASTAble" and want to dig deeper into this process, where can they find that?

Wherever you get your podcasts! The series from "Sporkful" is up now, and I really hope people will check it out. Because while it's obviously exciting to see this huge response to our shape, the story behind the creation of the shape is even more incredible. There were so many emotional ups and downs. You will hear my wife running out of patience with this whole mission. My kids are part of it. I'm literally brought to tears on more than one occasion. You will learn a ton about how pasta is made, why this project took nearly three years and you will laugh hysterically because a lot of things go wrong in very, very funny ways.

You can listen to all five episodes of "Mission: ImPASTAble" here.