The former speaker wants to remake himself into a respected elder statesman, but he helped turn the GOP radical 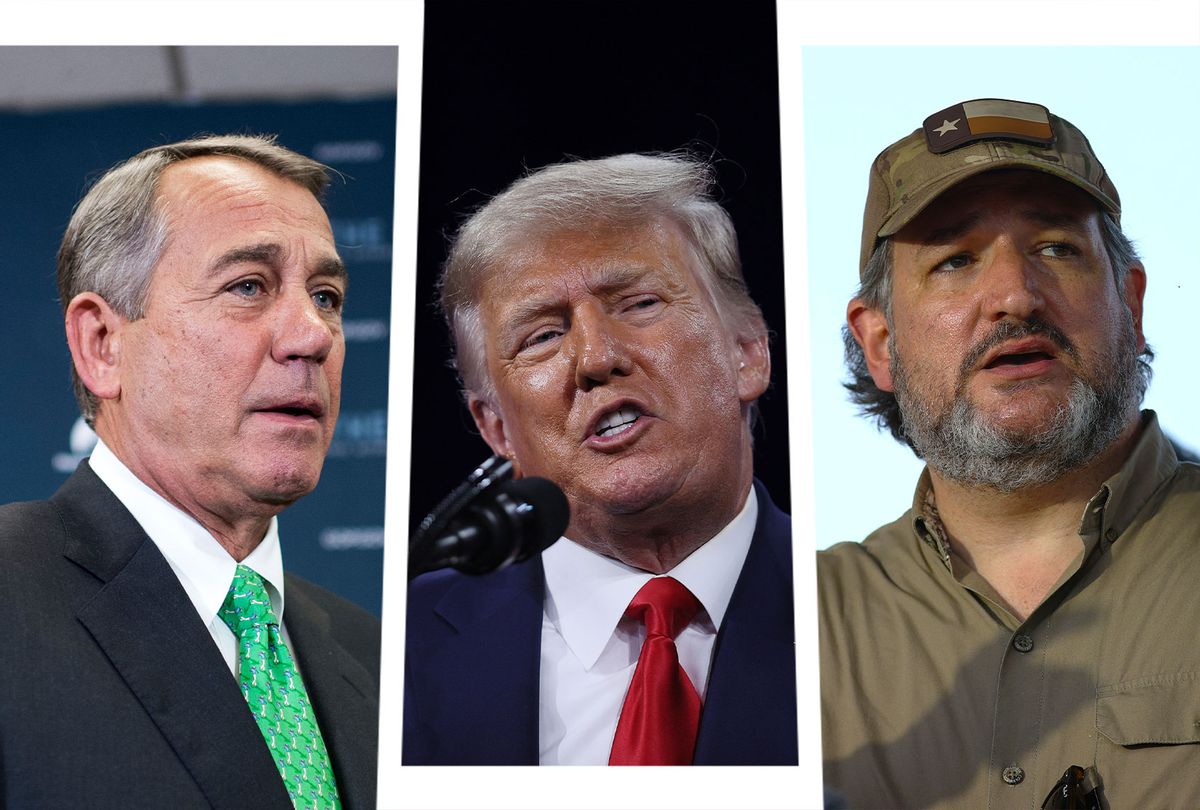 John Boehner is clearly worried about his legacy. The former Republican speaker of the House is on a mission to rehabilitate his image and position himself as a noble, principled conservative who is at odds with the current slate of bug-eyed Donald Trump enthusiasts and lying Dr. Seuss trolls. He's recently published "On the House: A Washington Memoir" and is on the media circuit, both heavily promoting the book and this cockamamie notion that Trump and other trollish Republicans like Sen. Ted Cruz of Texas or Rep. Matt Gaetz of Florida represent some big departure from a more dignified conservatism that Boehner claims to represent.

"I don't even think I could get elected in today's Republican Party anyway. I don't think Ronald Reagan could either," Boehner writes in excerpts quoted by the Washington Post. He also claims that "I'm not sure I belonged to the Republican Party [Trump] created."

This is —and it cannot be stated firmly enough — a stinking pile of horse-generated plant fertilizer.

Ronald Reagan was a proto-Trump figure, a B-list Hollywood celebrity who got elected riding a wave of white grievance by making barely coded racist overtures. That is why people like Boehner loved Reagan so much, and why they remade the Republican Party into the perfect vehicle for Trump, a sociopathic narcissist whose racism and sexism was even less coded than the brand that Reagan was peddling.

Boehner has been grabbing headlines lately by dunking, in often incredibly entertaining ways, on Trump and Cruz, who Boehner instructed to "go f*ck yourself" in the audio recording of the book. But as fun as all this is, no one should be fooled. Boehner is one of the main architects of the version of the GOP he dubs "Crazytown" in his book, a Republican party that is oriented around bigotry and trolling — and completely uninterested in anything resembling good governance.

Boehner, it must be remembered, came up in Congress during the years when Newt Gingrich was the Speaker of the House, which was really the beginning of the era of Republicans focusing all their energies on trolling and hating Democrats. Boehner now is highlighting his role in trying to push Gingrich out of leadership and his supposed regrets for the role he played in impeaching Bill Clinton. In truth, however, he was a major part of the rollout for the "Contract With America," which was really the beginning of the Republican Party as we know it now, a force that is interested more in destruction than in responsible governance.

When he was speaker during the Barack Obama presidency, Boehner fully leaned into the role as a destructive troll, ready to pander heavily to the Tea Party forces that were in a full-blown panic over the idea of a Black president and ready to do whatever it took to destroy his presidency. Under Boehner's leadership, House Republicans developed a variety of strategies aimed at kneecapping the popular Democratic president and forcing his main legislative achievement, the Affordable Care Act, into failure. Republicans believed — and continue to believe — that the best way to win politically was to tank economic recovery and expanded health care access, and then turn around and blame the Democratic president for what they themselves did. Boehner's main strategy was centered around tactics such as hostage-taking and brinkmanship.

In 2011, after he took over the Speaker position, Boehner oversaw a deliberately induced debt ceiling crisis, threatening to force the U.S. into default and ongoing economic crisis if Obama didn't agree to $4 trillion in spending cuts, with a focus on slashing at Medicare and Social Security in particular. If Boehner had succeeded, it would have destroyed the fragile economic recovery that Obama had overseen since the crash of 2008, but luckily, he overplayed his hand and largely failed to get what he wanted.

Still, that didn't stop Republicans. Under Boehner's leadership, the GOP took another pass in 2013, engaging in more debt ceiling brinkmanship in a pathetic, failed effort to defund the Affordable Care Act. The result was a government shutdown for half of October 2013, which Boehner defended by falsely claiming that the Affordable Care Act was having "a devastating impact" on the country. In reality, as the subsequent years showed, it was only "devastating" for those who don't like working class people having health care, but otherwise Obamacare has largely been a success.

By indulging these kinds of antics, Boehner helped further radicalize the GOP, encouraging both Republican politicians and voters to believe that it would be better to burn the U.S. to the ground than to allow an increasingly progressive, racially diverse majority to govern.  Under Boehner's leadership, blatant sexism, barely coded racism, and outright disinformation became central tactics in the war to gut Obama's presidency. For instance, Boehner made defunding Planned Parenthood a centerpiece of the debt ceiling and government shutdown showdowns, exploiting misogynist resentment in order to push his agenda of slashing social spending. And Boehner happily fed the "death panels" lie, which was a myth promoted by right-wing media that suggested the government was going to start killing old white people to free up health care resources for younger, more racially diverse Americans.

It is true that Boehner was pushed out of Congress in 2015 because he lost his appetite for using another government shutdown as leverage to take away women's birth control pills and Pap smears. So perhaps he really does think of himself as a victim of the right wing nuts, the people whose unchecked hatred of Obama, racism, and loathing of feminism turned them into political arsonists.

If so, Boehner is lying to himself. He is a true Dr. Frankenstein figure, taken out by the monster he helped create. For years, Boehner happily encouraged and led an increasingly paranoid, delusional right that was driven to political madness over the existence of a Black president and the social changes pointing towards a more progressive America. He let Tea Party racism flourish unchecked, viewing it as a valuable tool to garner support for his failed brinkmanship tactics. He helped pave the way for the rise of Trump, who harnessed all this white resentment and anger that Republicans cultivated under Boehner's leadership. And this should be his legacy, not some too-little-too-late last ditch effort to make himself over into a voice of reason and common sense.