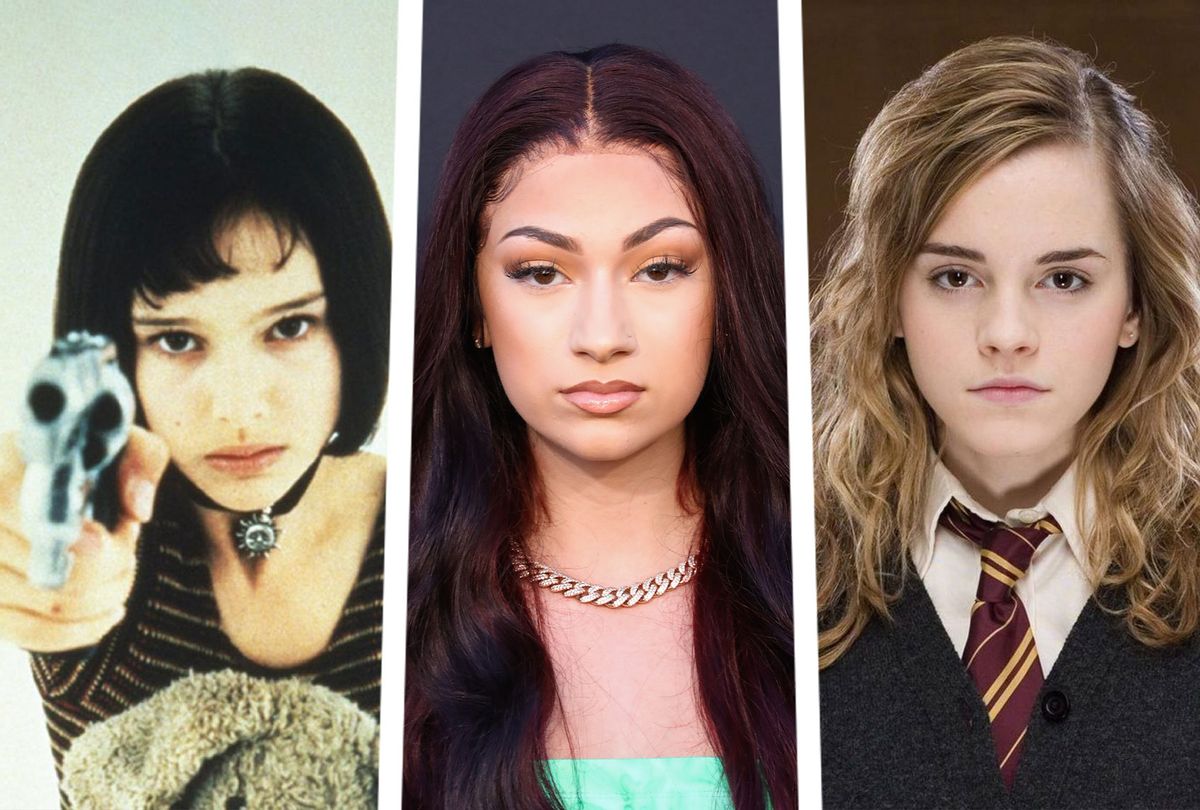 If you had never heard of "Dr. Phil" alum Danielle Bregoli before, you may have caught the teenage rap provocateur's professional name – Bhad Bhabie – in the past week. This is due to the fact that a disturbingly large group of people celebrated Bregoli turning 18 – and her opening an OnlyFans account to mark the passage into adulthood.

While the open lust for underage girls is sadly nothing new in the sphere of pop culture, Bregoli has received such interest for years having been quite literally a child of the internet. Many seem to forget (or pretend to ignore) that when she made her debut as the star of the "cash me outside" video, she was just 13 years old. However, over the years, Bregoli has seemed to embrace an older, more sophisticated image by dating adult men and acquiring many tattoos. Perhaps it's not that surprising then that earlier this year, she shared her intentions on Instagram to start an OnlyFans for 18th birthday.

OnlyFans allows a user to provide any content on the platform for their "fans" or subscribers. While artists, performers and physical fitness instructors have joined OnlyFans, the platform has also attracted a number of sex workers who decide the degree to which they will provide services.

Although Bregoli initially said that she drew the line at posting sexual content or nudity, she later tweeted a video of herself in various kinds of lingerie with a link to the account a few days after finally "becoming legal" – as society terms the landmark birthday, tying it to the legal age of sexual consent. Within six hours on OnlyFans, Bregoli made over $1 million, and the speed at which fans – who were clearly lying in wait to peek at her in this context – signed up frankly just feels icky and disturbing.

Our society tries to protect girls from being sexualized too young, as evidenced by the uproar over the release of "Cuties," and this even continues through the legal technicality of turning 18. But the discomfort over Bregoli's OnlyFans success appears to be felt by others, not Bregoli herself. Her decision to be directly involved in, and to capitalize off of this hype, marks a definitive change in a star embracing her sexualization rather than defending against it. Put succinctly, she is leaning in and in turn, cashing out.

Before OnlyFans, young starlets were still subjected to grown adults counting down to the age for them to presumably become "legal."

Natalie Portman had endured being sexualized from a very young age thanks to making her film debut in Luc Besson's critically acclaimed 1994 film "The Professional" as the charismatic 12-year-old Mathilda, who falls in with the middle-aged Léon (Jean Reno), a hitman who takes her under his wing. At the Women's March in 2018, Portman shared that there was a local radio program in her area with a countdown to the day that she would turn 18. She also shared the intensely distressing impacts of this constant sexualization, referring to it as "sexual terrorism."

Introduced to us at an even younger age, child actresses Mary-Kate and Ashley Olsen were icons of the late '90s and early 2000s. Despite being in the public eye since their literal infancy on the sitcom "Full House," a San Francisco Chronicle piece from the time claimed there were at least seven websites established to countdown to the twins' 18th birthday in 2004.

Furthermore, Emma Watson, who starred in the "Harry Potter" series beginning at the age of 10 shared a disturbing event that took place on her 18th birthday while participating in a Q&A session with HeforShe in 2016.

Watson said, "I came out of my birthday party and photographers laid down on the pavement and took photographs up my skirt, which were then published on the front of the English tabloid [newspapers] the next morning' 'If they had published the photographs 24 hours earlier they would have been illegal, but because I had just turned 18 they were legal."

Bregoli embracing this sexualized image is a shift from many of the other famous girls that came before her. Also, she is choosing to participate while retaining some of her bodily autonomy and choosing to post whatever she feels comfortable with.

But why would a young celebrity with a speculated net worth of $6 million feel compelled to create an OnlyFans account in the first place? Many factors could explain why: the enthusiasm of so many of her fans, the surge in popularity for new users on the platform, as well as the pervasive and wildly inaccurate portrayals of sex work that are frequent in our media consumption.

But a bigger change in society could be at play. Bregoli – who has broken records as one of the youngest female rappers to ever chart on the Billboard Hot 100 – has grown up in an era that has drastically shifted in mainstream portrayals of sexuality and power. It is undeniable that we are living in an era of the Kardashians, a family that has practically reshaped modern beauty standards balancing their provocative aesthetics with appearances at awards ceremonies and magazine covers.

They too, got their big break initially with sex-related content, with the viral leak of Kim Kardashian's sex tape with former partner and rapper Ray J. For someone to successfully convert that attention and scandal into a global empire that spans billions of dollars across an entire family is an indication that somewhere in the past 15 years, our cultural views have collectively shifted towards becoming more accepting of women taking ownership of their sexual image.

Even a cursory glance at the very genre Bregoli is a part of shows that her behavior is more along the lines of a trend than an independent move. Cardi B is one of the biggest stars in the world right now, and has been candid about her previous work as an erotic dancer, and continues to center her sex appeal in her music and videos, much to the chagrin of conservative commentators. Other peers like Megan Thee Stallion or Doja Cat have followed suit, putting a feminine spin on the heavily sexual subject matter included in rap music. Is it any wonder why a young woman trying to make her name in their industry would follow suit?

Ramona Flour is a sex worker, activist, and public relations specialist for COYOTE RI, an organization that is dedicated to "promoting the health and safety of people involved in the sex industry." Salon spoke to Flour to get insight as to why there might have been this change in culture.

She adds,"It's really difficult too because either people want to sensationalize and glamorize and romanticize sex work and be like, 'Oh well, I'm gonna get an OnlyFans and I'm gonna make 10K a month,' or whatever. But the flipside is that media perpetuates really negative stereotypes that we're all money-hungry, we're all lying, conniving, we're gonna steal your husband, that we have diseases. All of these negative things."

With this romanticization of sex work, Flour explains, comes the success of celebrities like Bregoli or Bella Thorne, the actress and former Disney Channel star who earned $1 million in the course of a week from her OnlyFans account (which broke records at the time.)

Flour continues, "There's this shock value, which I think [is] kind of why these celebrities get these millions of dollars overnight . . . there's a shock value with a** and titties out there for us to see, there's this even bigger shock value of an erotica meets violence." Later, Flour elaborates that, "This culture is kind of why we're seeing celebrities pop off in the way that they do, with the media continuing to perpetuate these stereotypes whether good or bad or whatever in between."

Meanhile, Bregoli is also currently trying to expose a treatment facility for "troubled teens" she was sent to as a result of her appearance on "Dr. Phil" in 2016. In a YouTube video that now has over 5 million views, Bregoli describes her experiences at "Turn About Ranch," being abused by staff and witnessing the abuse and mistreatment of her peers. She is now embarking on a campaign similar to that of Paris Hilton to share what these centers did to get them shut down.

The glaring juxtaposition of Bregoli coming forward about the trauma she endured as a result of her ascension into fame paired with her "adult debut" on OnlyFans indicates how muddled our culture has become regarding women's sexuality and their empowerment.

While the constant hyper-sexualization that Bregoli and many other underage celebrities endure could have been a significant factor in her choosing to capitalize on it, it seems that this is indicative of a larger cultural shift. With our media consumption habits and obsession with sex, we still have a perverse, tortured relationship with accepting that. Any adult woman who feels safe and empowered by the decision to participate in sex work should be able to. But the environment that they enter will be highly dependent on class, status, and perhaps most importantly, the intentions of those who surround them.