Derek Chauvin's trial is a test of whether facts matter

Will the truth prevail or will we face an ugly reminder of how often facts don't matter in the face of bigotry? 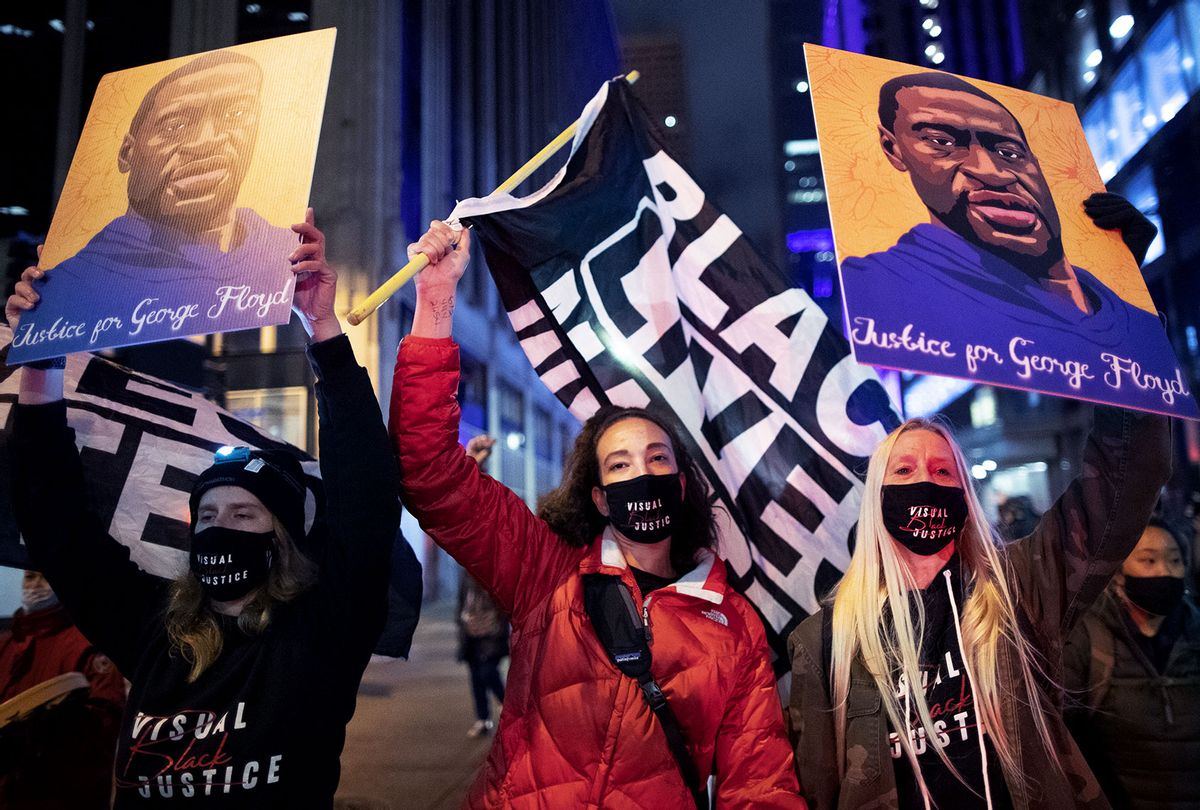 Protesters, demanding justice for George Floyd, gather in front of the Hennepin County Government Center, where the trial of former Minneapolis police officer Derek Chauvin has been ongoing, to stage a protest and march through the streets of downtown Minneapolis, Minnesota United States on April 9, 2021. (Christopher Mark Juhn/Anadolu Agency via Getty Images)
--

There were two scenes from Minneapolis over the weekend, one real and one satirical, that illustrate why the ongoing trial of former police officer Derek Chauvin for the murder of George Floyd is an intravenous line feeding a constant stream of anxiety into the national bloodstream.

First, the real: In the Minneapolis suburb of Brooklyn Center on Sunday, police killed a 20-year-old Black man named Daunte Wright who they had pulled over for an alleged traffic violation and then attempted to arrest when it was discovered he had an outstanding warrant. Police haven't said what traffic violation Wright committed to prompt police to pull him over or what the warrant was for. Wright reportedly attempted to flee and that is when police shot him. Protesters, understandably furious that yet another Black man who appears to have been no threat at all has died at the hands of police, hit the streets of Brooklyn Center Sunday evening. They were met with a police response that's become numbingly common: Flashbangs, tear gas and rubber bullets.

As for the satirical, the cold open on "Saturday Night Live," comedians Ego Nwodim, Kenan Thompson, Kate McKinnon and Alex Moffat play four Minneapolis news anchors, two Black and two white, discussing Chauvin's trial. The dark joke of the skit is that the two white anchors are optimistic that the overwhelming evidence against Chauvin will surely result in a conviction, with McKinnon saying, "there's no way the jury is going to fall for" the defense's dumb arguments. But the two Black anchors are skeptical, with Thompson hastening to say, "I'm not saying that."

What ultimately matters more? Will it be the facts or will brute power prevail over reality itself?

Anticipating a defense that will try to blame Floyd for his own death, the prosecution has carefully dismantled any excuse that Chauvin may want to hide behind. They brought in medical examiners to explain that it was oxygen deprivation from being kneeled on, and not drugs, that ended Floyd's life. They brought in other police, experts in use-of-force, to testify that nothing about Chauvin's behavior met the standard of necessary use of force to subdue an arrestee. The chief of the Minneapolis Police Department testified against Chauvin, saying he "absolutely" violated the department's protocols on reasonable restraint. They put traumatized witnesses on the stand and showed the horrific video of Floyd's death over and over.

As political scientist Scott Lemieux wrote at Lawyers, Guns, and Money, "the question is whether Chauvin is convicted or the jury nullifies." It is the threat of the latter possibility that is ratcheting up anxiety. As Nwodim's character in the "SNL" skit says, "Let's just say we've seen this movie before."

The defenses of Chauvin offered — that it was Floyd who killed himself or that the crowd that was trying to save his life killed him — are ridiculous, but there's reason to fear that they will work anyway. That's because the defense isn't trying to persuade anyone. They're just betting that there's at least one reactionary sitting on the jury, looking for any excuse he or she can cling to, no matter how idiotic, to justify voting "not guilty" — and one is all it takes. As anyone who has ever argued with a person drunk on Fox News propaganda can attest, conservatives have a tendency to grab onto any excuse they need to keep believing the bigoted things they want to believe, no matter how silly or irrational it makes them sound.

Sometimes it's embarrassing to look at artifacts from the past, like the movie "12 Angry Men" or any of the various Aaron Sorkin projects, that portrayed a belief that justice was achievable through reasoned discourse and rational assessment of the evidence. And, to be fair to people in the past, there was evidence that, even though getting there is hard and painful, Martin Luther King Jr. was right in his famous quote that "the arc of the moral universe is long, but it bends toward justice." As bad as things are, it is indisputable that things have improved on the fronts of civil rights, women's rights, LGBTQ rights, etc., as the result of people making reasoned arguments in the face of belligerent right-wing hate.

Still, the ascent of Donald Trump has illustrated, especially to privileged white people who previously had the luxury of a Sorkin-esque faith in rational discourse, that facts often just don't matter. That is especially true around what are inadequately labeled "identity" or "culture war" issues, that bundle of hot button topics that cut straight to the heart of who has social power and who doesn't in our society based on who they are.

It was just a few months ago that a crowd of almost exclusively white people stormed the Capitol and attempted to steal Joe Biden's electoral win from him. As was heavily discussed during Trump's subsequent impeachment trial, these people were amped up on Trump's "Big Lie" claiming that he was the real winner of the election. But, as Hayes Brown recently argued at NBC News, the deeper truth is that what "we witnessed was a race riot" of white people angry at changing demographics and fearful that their privileged status is under threat. The lies about a stolen election were just a cheap rationalization to cling to, one that speaks to their real belief that they have an absolute right to cultural dominance, regardless of what the rest of the country has to say about it.

Lies find fertile ground in the minds of people whose moral beliefs are indefensible. This is something that anyone who reads the history of white supremacy can easily see. And it's why it's totally reasonable for people to fear that, no matter how airtight the case against Chauvin is, that there will be at least one juror who grabs onto any excuse, no matter how stupid, to refuse to convict him. After all, people will claim to believe all sorts of idiotic things in order to rationalize their racist beliefs. Three out of five Republican voters will tell a pollster that Trump should have won the election, even though he lost by 7 million votes. Facts have a notoriously bad track record when pitted against the fantasies and lies bigots will use to justify their beliefs.

It's unfortunate in many ways that Chauvin's trial has become weighted down with so many of these issues. Ultimately, it still just comes down to 12 random people — and, as noted, it only takes one of those people to be the jerk to blow the entire thing up. That's the epitome of anecdotal evidence, and not really indicative of where we, as a society, stand on the question of whether facts matter. Still, the human mind notoriously focuses on the individual story over statistics. It's why the video of Floyd's death captured public attention, and the dry recitation of statistics of police violence did not.  And it's why Chauvin's trial has taken on such symbolic heft. The anxiety is palpable, unbearable even. Will truth prevail or will we once again face an ugly reminder of how often facts don't matter in the face of bigotry?