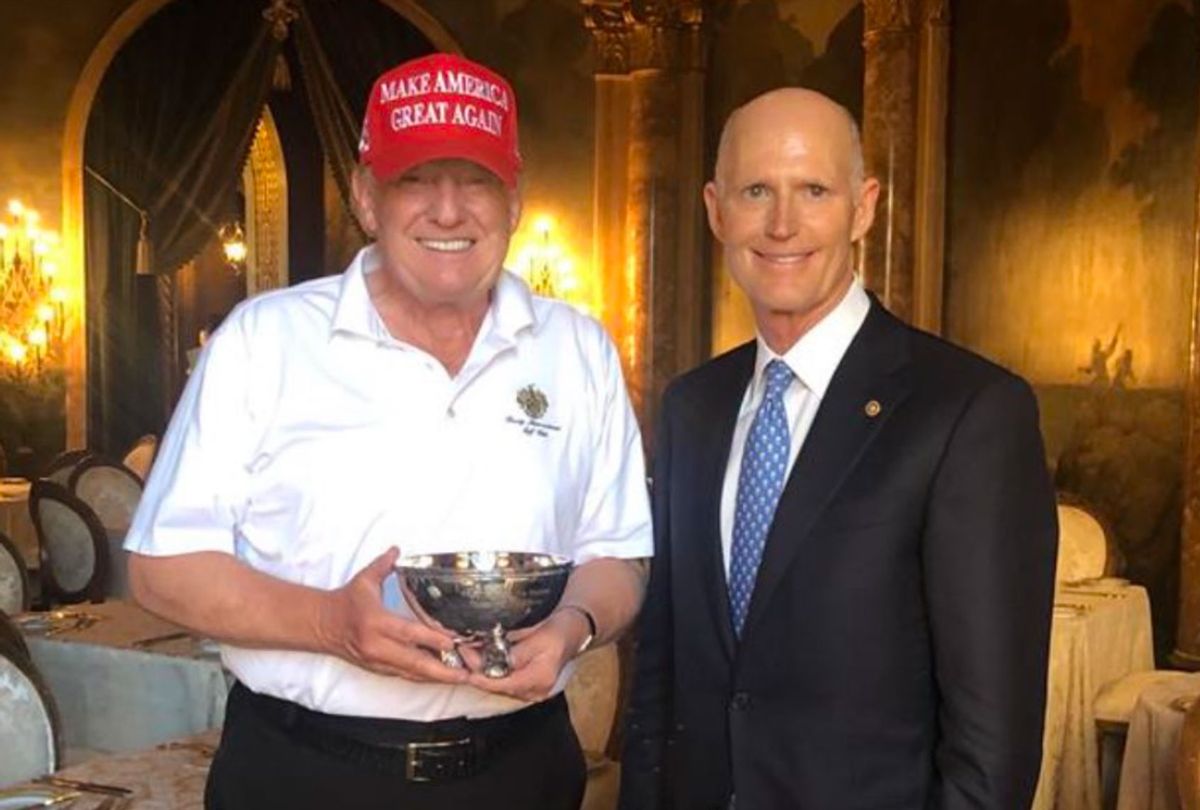 Just three months after political pundits predicted a seismic shift in the Republican Party in the wake of the deadly Capitol riot, the GOP is all but embracing the members blamed for inciting it.

"President Trump is a proven champion for all Americans," Scott said in a statement alongside a photo of him presenting Trump with a small ceremonial bowl, reminiscent of a third-place trophy in a local golf tournament. "Throughout his administration, he made clear his commitment to getting government out of the way of people's success, paving the way for American families and job creators to reach new heights. … We are grateful for his service to our country and are honored to present him with the NRSC's first Champion for Freedom award."

The award came ahead of Trump's speech to donors at a Republican National Committee retreat near Mar-a-Lago, where the former president ripped into Republican Senate leader Mitch McConnell, R-Ky., as a "dumb son of a bitch" for not backing his efforts to overturn his electoral defeat. Much of Trump's speech was devoted to bashing fellow Republicans who did not support his attempt to block the certification of votes in certain states, including former Vice President Mike Pence.

Trump has vowed to campaign against Republicans who voted to convict him of inciting the riot, like Sen. Lisa Murkowski of Alaska. That could soon put him against groups like the NRSC after Scott vowed to back her re-election campaign.

Trump's speech was widely panned by attendees, some of whom left early, according to The Washington Post. "It was horrible, it was long and negative," one attendee told Politico, which noted that donors are worried about their "money going toward his retribution efforts."

But donors and lawmakers are afraid to speak out publicly against the former president because of the grasp he maintains on the party's voter base. Even potential presidential contenders are nervous to tip their hands because Trump has continued to tease a possible third run himself.

"No one knows what the Trump effect will be in 2022 or 2024. He has promised to primary [Republicans who don't support him], so a great number of them don't want to risk that," GOP donor Fred Zeidman told CNN. "He has not made a statement about not running in 2024, so it limits what anyone can do now, for fear of alienating the Trump supporters."

Republican voters have widely rejected the clearly visible images of Trump supporters hunting lawmakers through the halls of Congress, with a majority instead buying into false (and contradictory) claims that the riot was actually a peaceful protest or the work of left-wing activists "trying to make Trump look bad." Polls suggest that a majority of Republicans would back Trump in the 2024 primary campaign if he decides to run again. A straw poll at the Conservative Political Action Conference earlier this year found that 68% of attendees want him to seek another term while a whopping 95% want the party to advance his policies and agenda. Trump has continued to raise staggering amounts of money off his election falsehoods, with his Save America PAC reporting 10 times more money in the bank than his campaign had in the first three months after he took office in 2017.

But it's not just Trump. The biggest supporters of Trump's election lies have cashed in on the controversy as well.

Sen. Josh Hawley, R-Mo., who led the Senate objections to the certification of election results in several states, raised more than $3 million in the three months since he pumped his fist to the mob that would soon attack Capitol Police officers and overrun the halls of Congress. That number is more than 10 times what some of his colleagues raised at a similar point in their terms, according to Politico, and a massive increase from the $43,000 he raised in the first quarter of the last election cycle. He even brought in nearly $600,000 in the two and a half weeks immediately following the riot despite temporarily pausing his fundraising efforts.

Rep. Marjorie Taylor Greene, R-Ga., also one of the most ardent backers of Trump's election lies, raised an even more eye-popping $3.2 million in the first three months of the year despite largely having to self-fund her campaign in 2020 — and despite representing a deep-red district where Democrats are unlikely to mount meaningful opposition.

But while Republicans have long relied on big-money donors, support for the likes of Hawley and Greene is coming from the party's grassroots, primarily through the donation platform WinRed, despite the scam-adjacent tactics employed by Trump's campaign and Republican fundraising groups. Hawley received more than 57,000 donations with an average contribution of $52. Greene received 100,000 donations, averaging $32 each.

Corporations that swore off making political donations in the wake of the riot have also started to reverse course. Just months after the attack, companies like AT&T, Intel and Cigna already appear to have broken their pledges to stop donating to Republicans who voted to overturn the election, making big contributions to the NRSC and the National Republican Campaign Committee.

JetBlue Airways' PAC became the first to end its pause on direct contributions to Republicans who voted to block the election results with a donation to Rep. Nicole Malliotakis, R-N.Y., who continued to echo Trump's lies even after the deadly insurrection of Jan. 6.