The book titled "The Fight for Truth: The Inside Story Behind the Breonna Taylor Tragedy" is expected in the fall 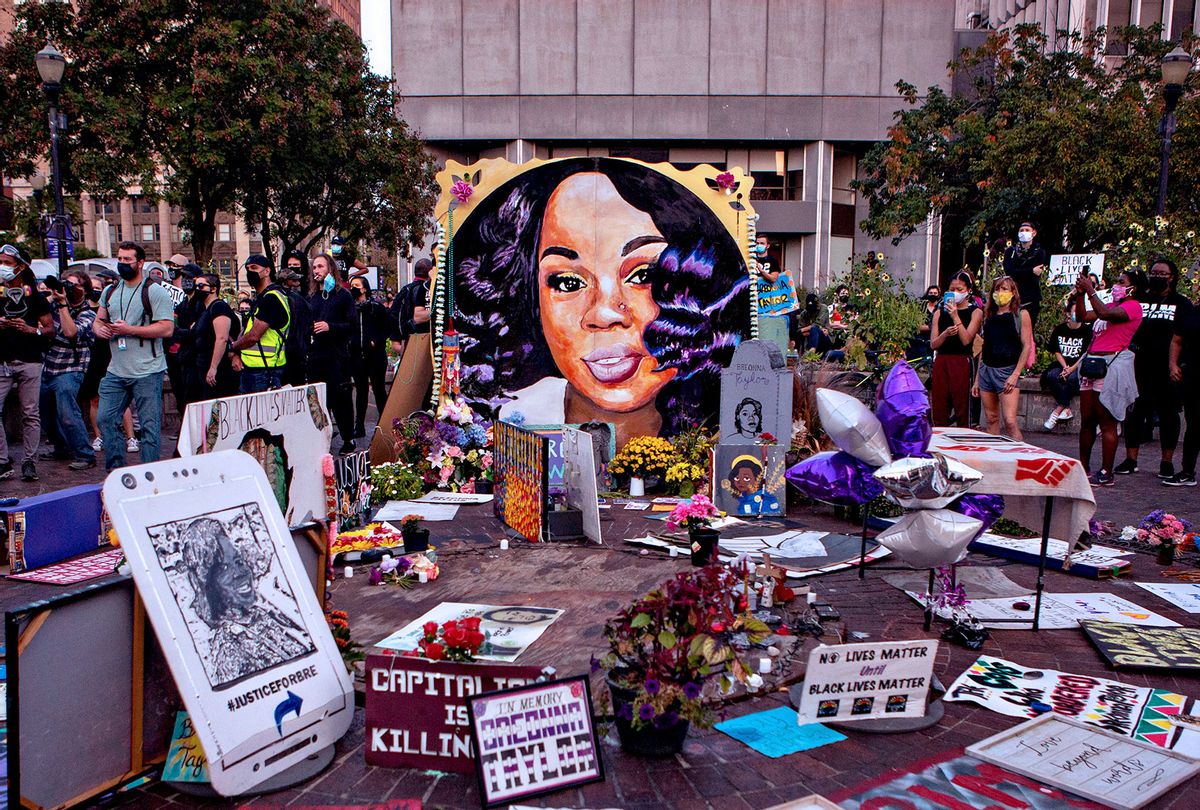 People gather at Breonna Taylors make shift memorial in Injustice Square Park in downtown Louisville on Saturday, Sept. 26, 2020 in Louisville, KY. Hundreds of others protest a Kentucky grand jurys indictment of one of three police officers in the killing of Breonna Taylor, but not for her death (Jason Armond / Los Angeles Times via Getty Images)
--

Sgt. Jonathan Mattingly, one of the Louisville police officers involved in the death of Breonna Taylor during a drug raid in 2020, is writing a book about the event, and the resulting outcry has caused Simon & Schuster to distance itself from the project.

The Louisville Courier-Journal first broke news about the book on Thursday afternoon after Mattingly reached out to the newspaper for permission to use one of their photographs from the 2020 protests in the wake of Taylor's death.

In an email, he told the Courier-Journal that the book, tentatively titled "The Fight for Truth: The Inside Story Behind the Breonna Taylor Tragedy," was still in progress. However, senior publicist Devon Brown for Post Hill Press, a conservative Christian press, said the book would be published by the fall through distributor Simon & Schuster.

The news sparked immediate backlash on social media and even inspired a MoveOn petition (which has now ended) asking for Simon & Schuster to cancel the book deal.

At first, Simon & Schuster released a statement saying that the book was being published by Post Hill Press, with whom they have a distribution deal and that "per our agreements with them we are unable to pick and choose which titles on their list to distribute."

However, by Thursday night, Simon & Schuster backtracked and released a new statement.

"Like much of the American public, earlier today Simon & Schuster learned of plans by distribution client Post Hill Press to publish a book by Jonathan Mattingly," the publisher said. "We have subsequently decided not to be involved in the distribution of this book."

While it's unclear how Simon & Schuster's decision will impact the publication of Mattingly's book, according to the New York Times , Post Hill Press spokesperson Kelsey Merritt said the publisher "supported the right to freedom of speech of all its authors."

"In the case of Sergeant Mattingly, the mainstream media narrative has been entirely one-sided related to this story, and we feel that he deserves to have his account of the tragic events heard publicly, as well," Ms. Merritt said. "Post Hill Press is standing behind our decision to publish his story."

As Salon reported in 2020, Taylor, a 26-year-old emergency room technician, was fatally shot by police serving a no-knock warrant in search of her ex-boyfriend in March as part of a drug investigation in a different part of the city. Police claim they announced themselves.

Kenneth Walker, Taylor's boyfriend, has maintained that he believed someone was breaking into the home and that the officers did not announce themselves. He fired a self-described "warning shot," which struck Mattingly in the leg.

Mattingly — as well as Detectives Brett Hankison and Myles Cosgrove — returned fire. Taylor was hit five times. No drugs were found in the home and only Hankison was charged with three counts of wanton endangerment, while Mattingly and Cosgrove were placed on administrative assignment.

While there's no statement of the format or content of Mattingly's book-in-progress yet, he has made comments about the shooting that indicate his point of view. In September, Mattingly wrote an email to his fellow officers saying, "We did the legal, moral and ethical thing that night," referring to the Taylor raid.

He also complained about the ongoing protests over Taylor's death.

"You DO NOT deserve to be in this position. The position that allows thugs to get in your face and yell, curse and degrade you," Mattingly wrote. "It's sad how the good guys are demonized, and criminals are canonized."

Post Hill Press has released controversial titles before, most notably "Firebrand," which was written in collaboration with Florida Representative Matt Gaetz, who is currently under investigation by the Justice Department over possible sex trafficking. That book was also distributed by Simon & Schuster.

Simon & Schuster has not announced if they plan to discontinue their distribution deal with Post Hill Press.