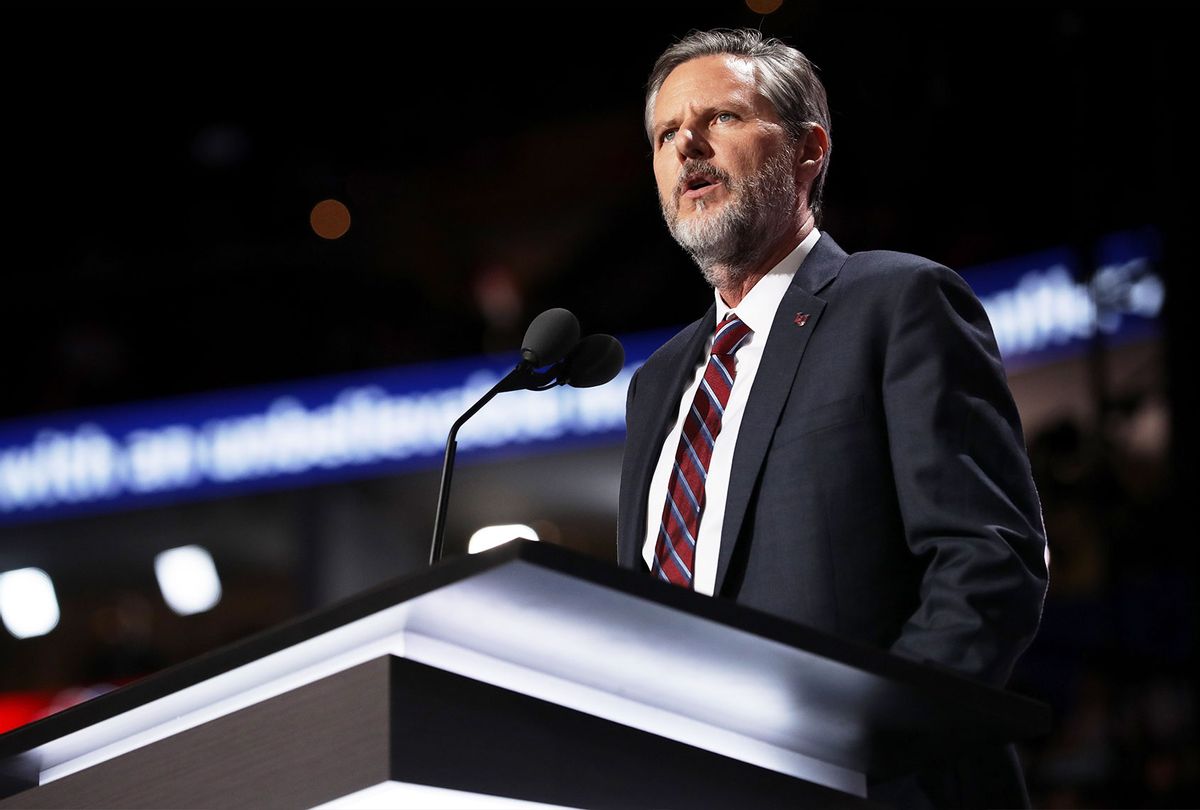 The new suit claims that Falwell "withheld scandalous and potentially damaging information" and failed to disclose "his personal impairment by alcohol" from Liberty's board of trustees while negotiating a new contract to head the Virginia school in 2019. At the time, Falwell convinced the board to include a higher severance payout if he resigned for "good reason" or if the university terminated his contract without cause.

"Mr. Falwell claimed to the committee that this would serve as a 'safety valve' for both him and the university if his full-throated support of former President Donald J. Trump proved damaging to the school's reputation," the Times reported. According to the university, Falwell's real motivation for organizing his contract in this way was because he was engaging in indiscretions that have gone on to damage the university's reputation. This, the suit alleges, was a breach of contract and fiduciary duty.

As Salon reported in 2020, Falwell found himself tumbling from one scandal into another, before finally officially plummeting from grace when he was ousted from Liberty in August. There were murmurs of impropriety in 2019 when Politico reported that former Trump attorney Michael Cohen helped "clean up racy 'personal' photographs" of Falwell's wife, Becki, including one of her in a French maid costume, which Falwell had allegedly sent to a number of employees at his evangelical university.

Things came to a head in August of last year when Falwell released an exclusive statement with the Washington Examiner claiming that his wife had engaged in a "fatal attraction type" affair with Giancarlo Granda, a former pool attendant-turned-Miami businessman. He also said he was being extorted by Granda who was threatening to go public with information about the relationship. The next day, Granda released a statement of his own at Reuters claiming that Falwell both knew of and observed his wife's extramarital relationship.

"Becki and I developed an intimate relationship, and Jerry enjoyed watching from the corner of the room," Granda said.

Granda also followed up his statement with a post on Twitter in which he described Falwell as a "predator," saying he'd sent Granda an image of a female Liberty University student exposing herself at their farm. In an interview with the Washington Post, Falwell confirmed, explaining that "She had on, I don't know how to say this, granny panties." He claimed it wasn't sexual but admitting that he sent the photo to multiple people because he thought it was funny.

Additionally, Liberty employees detailed other instances of "Falwell's behavior that they [saw] as falling short of the standard of conduct they expect from conservative Christian leaders, from partying at nightclubs, to graphically discussing his sex life with employees."

Amid this, the suit claims that Becki Falwell privately contacted three members of the university's executive committee to express concerns about her husband's excessive drinking, which had intensified in the wake of the Granda situation. The university then paid for Falwell to have a short stint in rehab, but he balked at the idea of further residential treatment.

"There were concerns that he smelled of alcohol during work interactions," the suit alleges.

The suit from Liberty University also claims that by keeping the couple's sexual agreement with Granda — and the ensuing "extortion" — a secret from college leadership, he concealed an "active threat" to the university's standing.

The backlash towards Falwell has pointed to the apparent hypocrisy inherent in his actions.

Under Falwell, Liberty students have been expelled for violating the student honor code called "The Liberty Way." The code forbids premarital sex and same-sex relationships. Drinking alcohol and "obscene language" are infractions, and students are instructed to "dress modestly at all times."

According to the New York Times, a spokesman for Liberty University, Scott Lamb, said the school had no comment on the suit. For his part, Falwell sued the university for defamation in October, arguing that it damaged his reputation by not working to verify the allegation about the affair, but ultimately dropped the suit in December 2020.