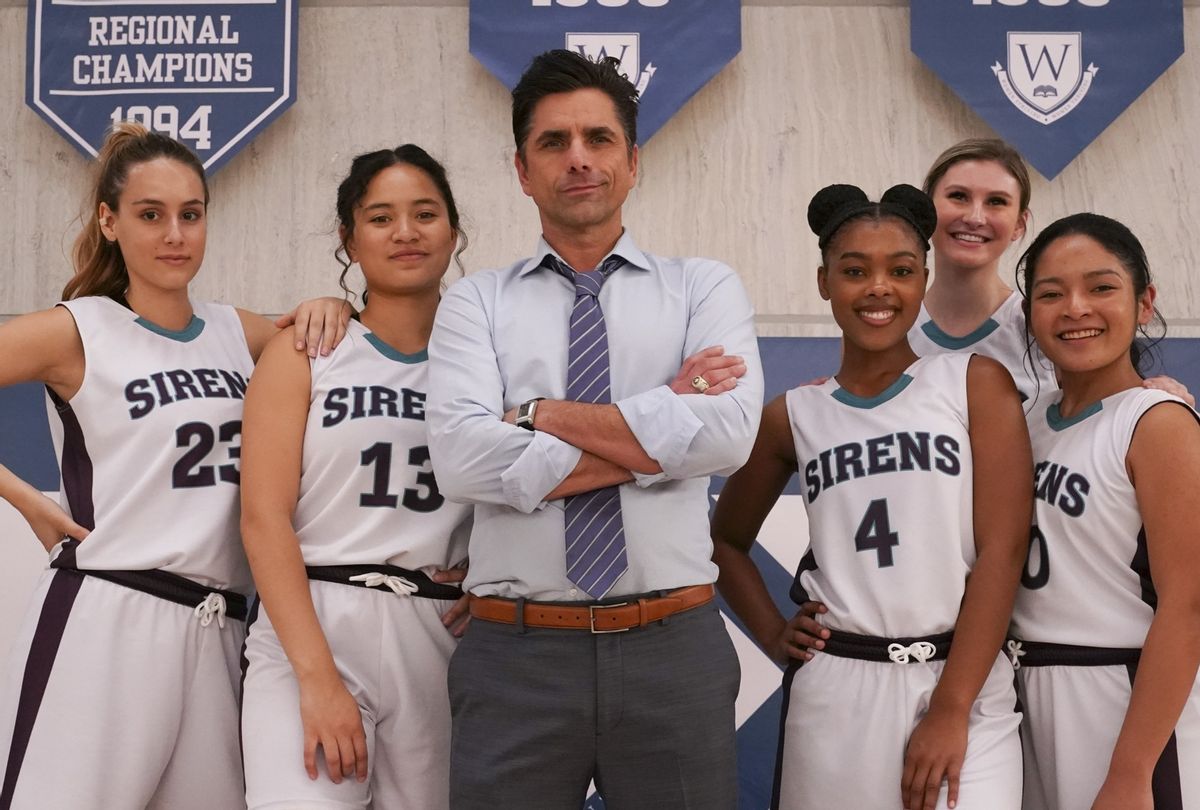 Whether you know him as Blackie Parrish from "General Hospital," Uncle Jesse from "Full House" or "ER," "Necessary Roughness," "Entourage," or "You," Emmy Award-nominated actor and producer John Stamos has been a fixture in and outside of Hollywood for decades. Though he spent years, in his own words, trying to "shed this dumb Peter Pan syndrome that I had," Stamos has now aged gracefully into both fatherhood and roles that eschew the toxic masculinity traditionally found in films and television.

His new sports dramedy "Big Shot" is created by David E. Kelley and features many formidable female characters. Stamos says most of the writing credit goes to women. "I went into the writers' room right off the bat, and I think it was about 65% women, which was great," he recalled.

On the show, Stamos plays Marvyn Korn, a top-tier basketball coach who finds himself working at an elite girls' school after getting ousted from the NCAA. Korn starts out as an arrogant, tough character who is out of his element working with teen girls, having been accustomed to working with adult male athletes.

Stamos appeared on "Salon Talks" to discuss how he likens his own personal growth in life as an actor to Korn's evolution to a gentler, more self-aware and thoughtful man. When Stamos started out in Hollywood, he felt pressure to look and act like a perennial bachelor. "I think a lot of it came from outside . . .You know, that's the problem," he said. "You start listening to the outside world, and then you're screwed. So it just took me a long time to grow up. I think I was buying into, or I felt obligated – and it was my fault – to feed that image of bachelor, cocksman guy. I really wasn't that guy, but I felt like I had to puff that up at times."

When Stamos shed that image, he got serious about life and love, and this opened up many possibilities for him, including marriage and fatherhood. "Especially with a child now, you start to realize your mortality," he added.

Watch the "Salon Talks" interview with Stamos here or read the transcript below.

What drew you to doing this series?

Having a show with this many women in it, first of all. Strong women. And the value of a guy like Korn, who's sort of releasing his assumptions and his preconceived ideas of these girls and connecting with them. It just breaks down every stereotype. When we start the thing, he's resistant to the idea that it's going to be a revolutionary experience for him. To him it's a step down.

There was a couple of articles before the show even came out. It was like, "Oh, women's basketball. Why are they putting it out?" They're not . . . We're building it up and we're shining a light on it. But in his mind it was. I mean, he comes from college basketball and it just starts with him waking up to the idea that these assumptions are old and they're dated, and he's got to get with it.

The line, just in general in life, as you know in our society now, is moving. And if you're not paying attention, then it's your fault. Everybody has a voice now, and people are speaking and they're saying, "I don't feel equal." "I don't feel noticed." "I don't feel that I matter." We have to listen. It's our job. Not to judge you. We don't know how they feel.

Somehow you've had tremendous sustaining power in the industry, which is a great accomplishment. What do you think is your magic formula for balancing doing the job and keeping yourself looking the part? Do you have any tips?

I'm glad that all that comes off. Because it took me a long time to shed this dumb Peter Pan syndrome that I had. I think a lot of it came from outside . . . You know, that's the problem. You start listening to the outside world and then you're screwed. So it just took me a long time to grow up. I think I was buying into, or I felt obligated and it was my fault, to feed that image of bachelor, cocksman guy. I really wasn't that guy, but I felt like I had to puff that up at times to – I think a lot of people live vicariously through that kind of image. But it really wasn't me. So once I shed that, I just started to really get serious about life.

I've always sort of taken care of myself. I don't do a lot of creams and ointments and stuff, but I do have very good genes. I had to sober up about five-and-a-half years, almost six years now. And that did a lot for me. I mean, that opened up my life, really. It opened up marriage and a child and a solid career. So that was a big turning point for me.

It just takes a long time. It took me a long time anyway, to just not try to be funny all the time and not try to charm the pants off – I was going to a shrink, or I go once in a while, he said, "Stop trying to charm the world. You did it already. Just relax."

It's just so hard. And I'm doing that in this character, I think. It's taken me a long time just to not move around and trust the writing and not have to do s**t, you know, stuff. So I think that's part of it.

Then my dad was a great example of discipline and being a good man, a hardworking man. He had fast food restaurants that he was grooming me to take over. I would watch him treat the bus boy in the back washing dishes, the same way that he treated his best customer. I didn't really realize it until years later that that's what he was doing. And that's what I try to do. I'm interested in people. But I think maybe that's part of the – that's helped the longevity.