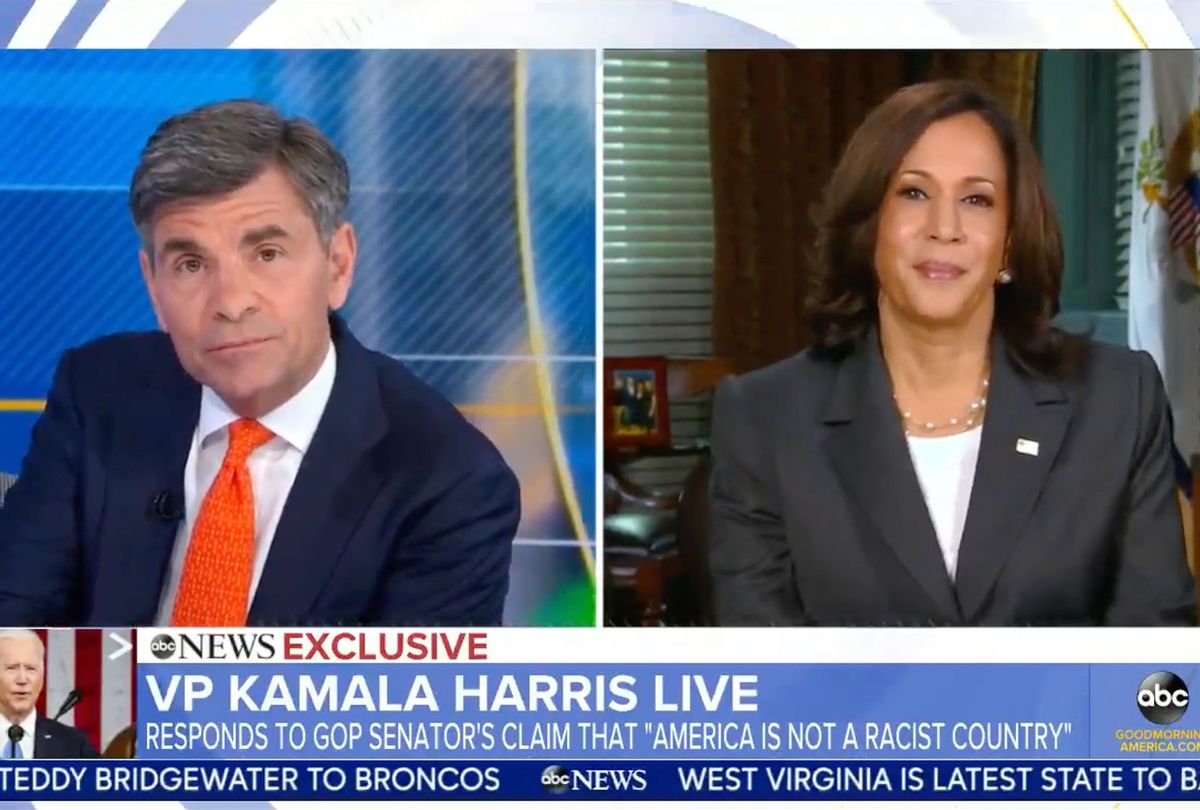 Vice President Kamala Harris said Thursday during an appearance on "Good Morning America" that she doesn't think "America is a racist country," a rare statement that for a moment united the political left and right in criticism of the California Democrat.

During the segment, GMA host George Stephanopoulos asked Harris about the GOP's rebuttal to Biden's speech, made by Sen. Tim Scott — in which the South Carolina senator said, "America is not a racist country."

Stephanopoulos used the opportunity to ask the vice president about the statement:

"Senator Tim Scott said last night that America is not a racist country. Do you agree with that, and what do you make of his warning against fighting discrimination with more discrimination?" he asked.

"Well, first of all, no, I don't think America is a racist country," the vice president declared. "But we also do have to speak truth about the history of racism in our country and its existence today."

Harris continued by thanking Biden for "always having the ability and the courage, frankly, to speak the truth about [racism in America]. He spoke what we know from the intelligence community, one of the greatest threats to our national security is domestic terrorism manifested by white supremacists.

Watch the clip below via ABC:

Both the political left and right expressed frustration over Harris' remarks, though for seemingly very different reasons.

Filmmaker and activist Bree Newsome responded to Harris, writing on Twitter, "The establishment keeps framing racism as something in America's past but can't pinpoint exactly when it supposedly ended... because it never did. All this language about 'America isn't racist' is to mollify white people who are offended by the topic.

"Everything in America revolves around the violence of white people & trying to prevent white people from raging again. All the language of the political establishment is loaded with this concern— 'America isn't a racist country.' 'Don't do that b/c it will rile the Trump folks.'"

"The Black republican and the Black cop agree: America not racist!" another Twitter user wrote — referring to Harris, the former San Francisco district attorney, as a "cop." In that position, she "oversaw 1,900 convictions for pot offenses" alone, The Mercury News previously reported.

The political right also fumed over Harris' appearance, taking umbrage at the "but" after her statement.

"Kamala Harris sort of agreed with Tim Scott, and then she used the word 'but...'" right-wing radio host Wayne Dupree tweeted.

The conservative media sphere also called out the perceived hypocrisy in how both messages were received.

"'No, I don't think America is a racist country,' VP Harris said on Thursday morning. It's unlikely she will face the same derision as Senator Tim Scott, nor should she," right-wing magazine The National Review tweeted.