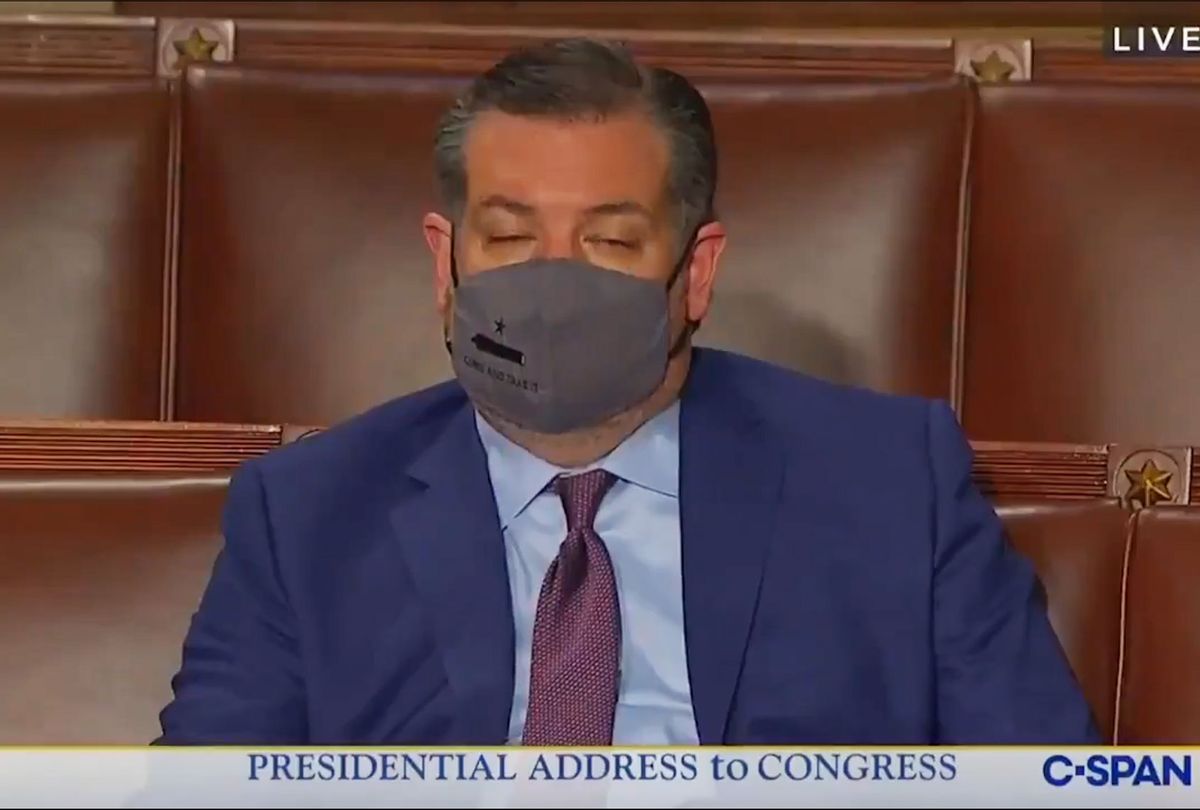 Ted Cruz dozing off during US President Joe Biden's address to a joint session of Congress at the US Capitol in Washington, DC, on April 28, 2021 (C-SPAN)
--

Sen. Ted Cruz of Texas, the onetime Donald Trump foe turned MAGA loyalist, appeared to doze off during President Joe Biden's joint speech to Congress on Wednesday night, at one point closing his eyes completely. That didn't stop the controversial Cancún frequent-flyer senator from offering opinions on Fox News about how the president's address missed the mark.

Cruz was caught by a roaming camera in the House chamber during one part of the speech, closing his eyes and appearing to struggle to keep them open. Speaking about immigration reform, Biden said, "If you actually want to solve a problem, I've sent a bill to take a close look at it," before a camera panned to Cruz, closing his eyes about an hour into the speech.

Responding to the moment caught on camera, Cruz tweeted, "#BoringButRadical."

Following the Biden address, the Texas senator said on Fox News, "The speech by design was calm and dulcet tones. I challenge you to remember a single line from the speech. It was monotone; the chamber was nearly empty."

Joe Biden is deliberately being boring, but the substance of what he is saying is radical. #BoringButRadical pic.twitter.com/37YS701pyn

"Joe is deliberately being boring, but the substance of what he's saying is radical," Cruz added.

One right-wing pundit came up with a bizarre and less-than-plausible excuse as to why Cruz had closed his eyes. "No, he was praying for America," tweeted American Conservative Union chairman Matt Schlapp, who enjoys having lead pipes in his home and getting parking tickets to "own the libs."

Others on Twitter shared snarky memes and edited videos of the moment.

In other Cruz news, the Texas senator announced in a Wall Street Journal opinion piece published Wednesday evening that he will be no longer accept campaign contributions from corporate PACs due to their "woke" politics. Cruz called on his fellow GOP lawmakers to do the same. "For too long, Republicans have allowed the left and their big-business allies to attack our values with no response," Cruz wrote. "We've allowed them to ship jobs overseas, attack gun rights, and destroy our energy companies. We've let them smear Republicans without paying any price."