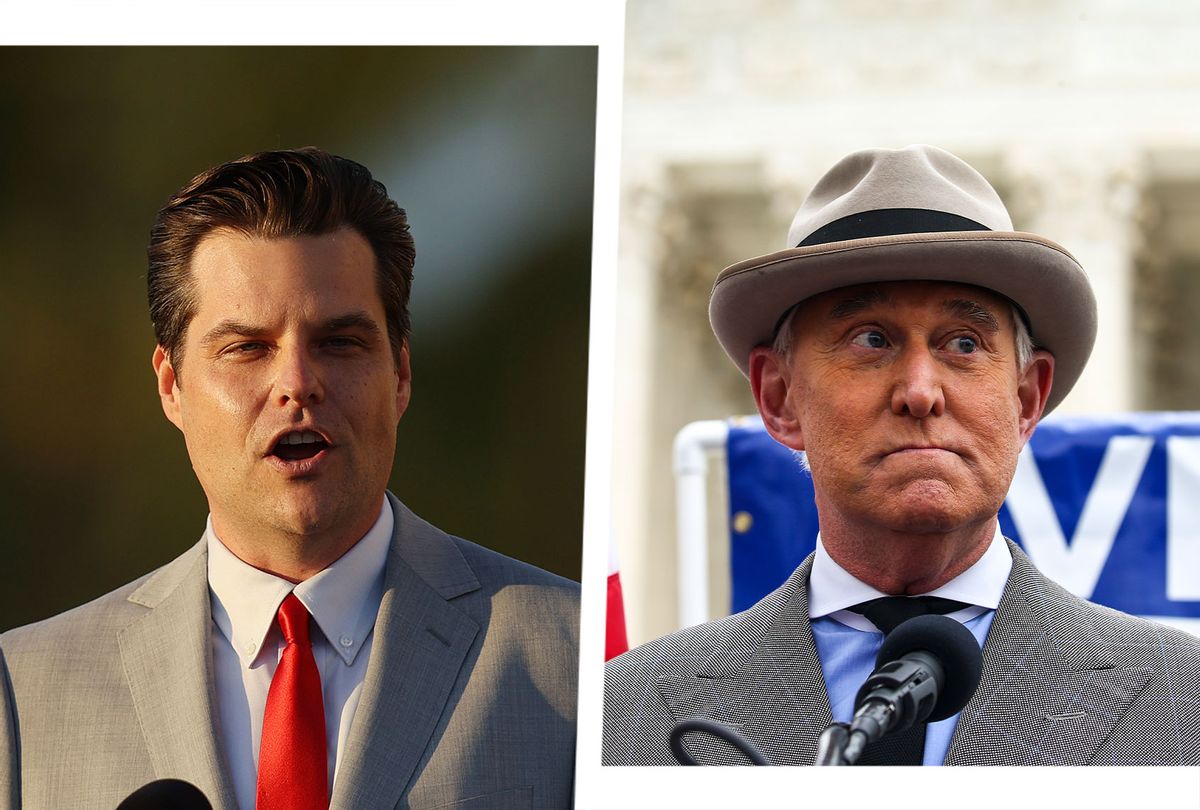 Embattled pro-Trump firebrand Rep. Matt Gaetz, R-Fla., paid to have sex with a 17-year-old minor, according to a letter  reportedly written by Joel Greenberg, one of Gaetz's longtime friends, that was published by The Daily Beast late on Thursday night.

"On more than one occasion, this individual was involved in sexual activities with several of the other girls, the congressman from Florida's 1st Congressional District and myself," Greenberg penned in the freshly discovered letter. According to the Beast, Greenberg was referring to a 17-year-old in the letter. "From time to time, gas money or gifts, rent or partial tuition payments were made to several of these girls, including the individual who was not yet 18," Greenberg added. "I did see the acts occur firsthand, and Venmo transactions, Cash App, or other payments were made to these girls on behalf of the Congressman."

Greenberg, a longtime associate of Gaetz and the former tax collector in Seminole County, Florida, has been the focus of various investigations and has been indicted on 33 felony counts, which include charges stemming from the alleged sex trafficking of minors. The New York Times first reported at the end of March that the Department of Justice launched a probe into whether Gaetz violated federal sex trafficking laws by paying a minor in exchange for sex. Additional reports in April have suggested that Gaetz showed revealing pictures of women with whom he claimed to have had sex to colleagues on the House floor.

Within the letter obtained by The Daily Beast, Greenberg attempted to enlist the help of longtime GOP operative Roger Stone in seeking a pardon from former President Donald Trump.

The Beast reports that Greenberg offered Stone $250,000 in Bitcoin, but Stone cautioned, "I cannot push too hard because of the nonsense surrounding pardons." A week before Trump left office, Stone allegedly contacted Greenberg through the encrypted messaging app Signal to tell the Gaetz associate he was "feeling confident" and that Greenberg should therefore prepare the Bitcoin payment. From the Beast story:

In late 2020, Greenberg was out of jail and in communication with Stone. A series of private messages between the two — also recently obtained by The Daily Beast — shows a number of exchanges between Greenberg and Stone conducted over the encrypted messaging app Signal, with communications set to disappear. However, Greenberg appears to have taken screenshots of a number of their conversations.

"If I get you $250k in Bitcoin would that help or is this not a financial matter," Greenberg wrote to Stone.

"I understand all of this and have taken it into consideration," Stone replied. "I will know more in the next 24 hours I cannot push too hard because of the nonsense surrounding pardons."

In classic Stone fashion, the veteran right-wing operative confirmed to The Daily Beast that Greenberg wanted to pay him, but claimed to have no role in seeking a pardon.

"I made no formal or informal effort in regard to a pardon for Mr. Greenberg," Stone told The Daily Beast. "I never requested or received a penny from Mr. Greenberg. I recall him offering to retain me, and I declined. To be clear, I did advocate pardons for a number of people who I had [sic] been unfairly treated by the justice system and was compensated by no one for doing so."

Stone did not respond to Salon's request for comment on Thursday night.

The longtime "dirty trickster," who sports a tattoo of Richard Nixon's face on his back, has a complicated relationship to the ever-evolving scandal around Gaetz. During the early days of reporting on the congressman's troubles, Stone appeared on Infowars and advised Gaetz to go on "offense."

"He needs to go on offense; this is right upfront in Stone's Rules," Stone told host Alex Jones. "The left-wing, non-journalist, fake-news media are the most vicious, malicious, dishonest people that I have ever come across. All of these stories that are maligning Matt Gaetz today are based on leaks. Where is the beef? Where are the facts? I don't think there are any facts. I think this is a good old-fashioned smear."

Gaetz has consistently maintained his innocence. On Thursday night, he continued to post tweets about unrelated matters before and after the bombshell report from The Daily Beast.