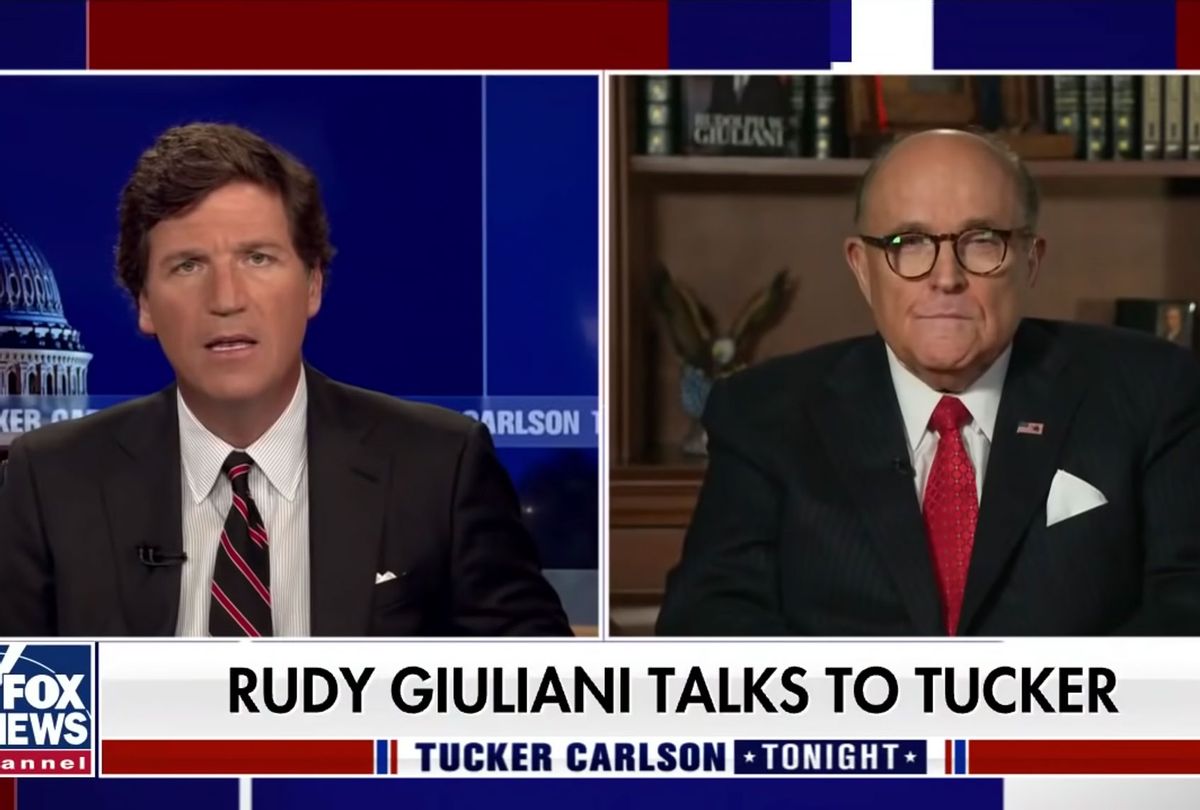 Donald Trump's former (or perhaps current) personal lawyer Rudy Giuliani joined Fox News' Tucker Carlson on Thursday night to discuss the early-morning FBI raid on his apartment Wednesday, which quickly devolved into a Giuliani riff claiming that the search was "completely illegal" because the federal government had somehow downloaded the former New York mayor's data from his "iCloud."

Giuliani began the segment by recounting the "bang" at 6 a.m. on Wednesday as federal agents arrived with paperwork to carry out a search warrant. "I looked at the warrant, and I said, 'You know, this is extraordinary because I offered to give these to the government and talk it over with them for two years,'" Trump's personal lawyer told Carlson.

"I don't know why they have to do this," Giuliani added. On Thursday, The New York Times reported that the feds were apparently seeking information connected to Giuliani's role in the Trump's dismissal of the former U.S. ambassador to Ukraine, Marie Yovanovitch. Notably, Giuliani did not mention his possible wrongdoing by communicating with Ukrainian officials ahead of the first impeachment trial of former President Trump. "The search warrant is on one single failure to file for representing a Ukrainian national or official that I never represented," Giuliani claimed to Carlson, positioning himself as a victim of government persecution.

"I never represented a Ukrainian national or official before the United States government," Giuliani continued. "I've declined it several times. I've had contracts in countries like Ukraine. In the contract is a clause that says I will not engage in lobbying or foreign representation. I don't do it because I felt it would be too compromising."

The former LifeLock spokesman proceeded to push onward in the Carlson segment, speculating as to why FBI agents d declined to take hard drives from his apartment that were allegedly connected to President Joe Biden's son, Hunter. "I said, 'Well, don't you want these?' And they said, 'What are they?' I said, 'Those are Hunter Biden's hard drives.' And they said, 'No, no, no.' I said, 'Are you sure you don't want them?' The warrant required them to take it," Giuliani claimed. "And they said, 'No, no, no.' One last time, I said, 'Don't you think you should take it?' And they said no. Hunter Biden's hard drives fall within the scope of the subpoena. The subpoena required them to take all electronics. They decided to leave that behind!"

The tirade by the onetime "America's mayor" continued on Fox News' highest-rated show for several more minutes, only to conclude with the former gold-coin pitchman railing against the "completely illegal search" based on the dubious claim that the FBI had already acquired his data from the "iCloud." (The Apple cloud-computing service marketed under that name is encrypted.)

"The only way you can get a search warrant is if you can show that there is some evidence that the person is going to destroy the evidence," Giuliani stated. "Or is going to run away with the evidence. Well, I've had it for two years and haven't destroyed it."

According to Rudy Giuliani, the search warrant from the feds was "completely illegal" because he wasn't going to "destroy the evidence."

Oh, and by the way, he says the feds "also got it from the iCloud."

Yeah, don't ask me to make sense of it. pic.twitter.com/ZL7HLL48gV

"And they also got it from the iCloud. So, there was no — there was no justification for that warrant!" Giuliani added, pointing his thumb toward the sky. "One of many that this 'Department of Injustice' tragically has done, and it breaks my heart because I belonged to the Justice Department, and I think I had a record that is a hell of a lot better than theirs."

During his radio show on WABC earlier on Thursday, Giuliani described the raid on his apartment as a "disgrace." "I've been fighting crooks all my life. I'm fighting crooks again," he said. "The only tragedy of it is they have titles from the government. But they're a disgrace! They are a complete disgrace to the office that I distinguished!"

It appears that former President Trump remains supportive of Giuliani, at least for now. Early Thursday morning, Trump responded on Fox Business to the Giuliani raid, calling it "unfair" and motivated by a "double standard" with no historical precedent.

"Rudy Giuliani is a great patriot," Trump stated. "He does these things — he just loves this country. And they raid his apartment? It's like, so unfair! And such a double standard like I don't think anybody's ever seen before. It's very, very unfair."

According to a new from The Daily Beast on Friday, Giuliani has contacted legendary attorney Alan Dershowitz (also serving as legal counsel to MyPillow CEO Mike Lindell) to enlist his advice regarding Fourth Amendment concerns allegedly stemming from the raid. Search warrants are only merited for attorneys "when you have reason to believe that the lawyer would destroy evidence," Dershowitz told The Beast.