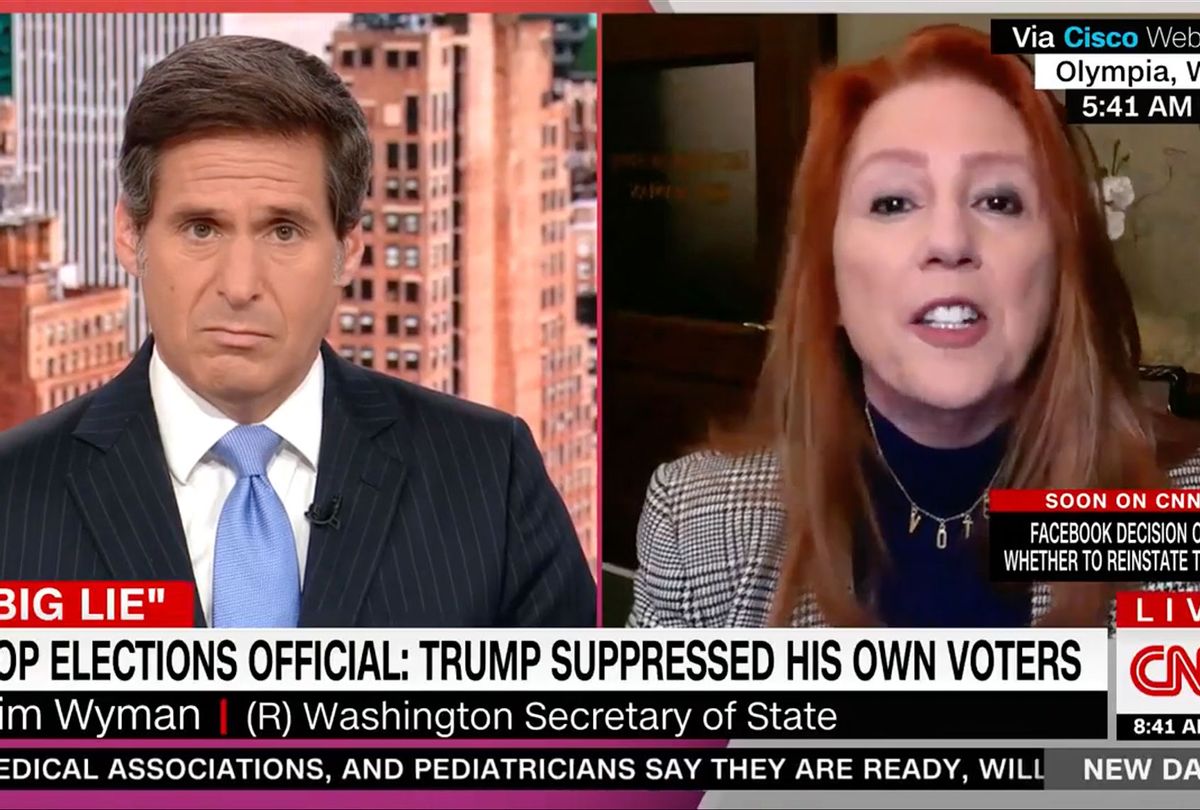 In a rare move, Washington's Republican Secretary of State Kim Wyman blasted her own party's move in Arizona to "recount" 2020 election results in Maricopa County — an effort spearheaded by the pro-Trump private consulting firm "Cyber Ninjas," which has been enlisted by Republican leaders in the Arizona state Senate.

During a CNN interview on Wednesday morning, Wyman joined "New Day" anchor John Berman to discuss the ongoing efforts in Arizona to overturn legitimate results via a phony "recount," which Trump views as a path back to the White House. The Republican secretary of state further warned viewers that the unprecedented steps being taken by the state GOP "should alarm every American."

"And Madam Secretary, you see like flashing, you know, red warning signs and sirens here based on what's happening in Arizona. Why?" anchor John Berman began the segment asking Wyman. The secretary of state replied by citing the private company, "Cyber Ninjas," taking over command of the "recount."

"Well, because we're witnessing an event that has absolutely unprecedented movement in elections," Wyman responded to Berman's question. "We've never seen a private company be able to come in and take command and control of live ballots that were used in an election, and the precedence of this is just unnerving for election officials across the country. And it should alarm every American in the country because we don't want people to be able to just walk into a crime scene and contaminate evidence for a future trial. That's what this is."

The Republican state official went onto decry the partisan nature of the Arizona recount, which she said is being conducted by political operatives in an attempt to unfairly gain power.

"I'm worried because now they've given a new playbook to campaigns and political parties," Wyman declared. "And make no mistake, this won't stop with the Republican Party. What we could see, you know, down the road is whatever political party is in charge of a state legislature, if they don't like the outcome of an election, then let's just go ahead and make up an audit, make up a process, some sort of review, and the public will not be well served," Wyman added. "And the public will have trouble being — having any confidence in those results."

Tn Trumpworld, the Arizona "recount" efforts are a highly anticipated event, which has attracted the attention of both right-wing media and Trump himself.

On the other hand, right-wing pundits, including MyPillow CEO Mike Lindell and right-wing media websites including "The Gateway Pundit," view the "recount" as a path to have Trump back in the White House by August. (A lofty goal that election experts have repeatedly said is nothing more than a pipe dream.)