"The Turning": The dark side of Mother Teresa's order, according to nuns who left

Salon talks to the maker of a new podcast on abuse, suffering and forbidden love within The Missionaries of Charity 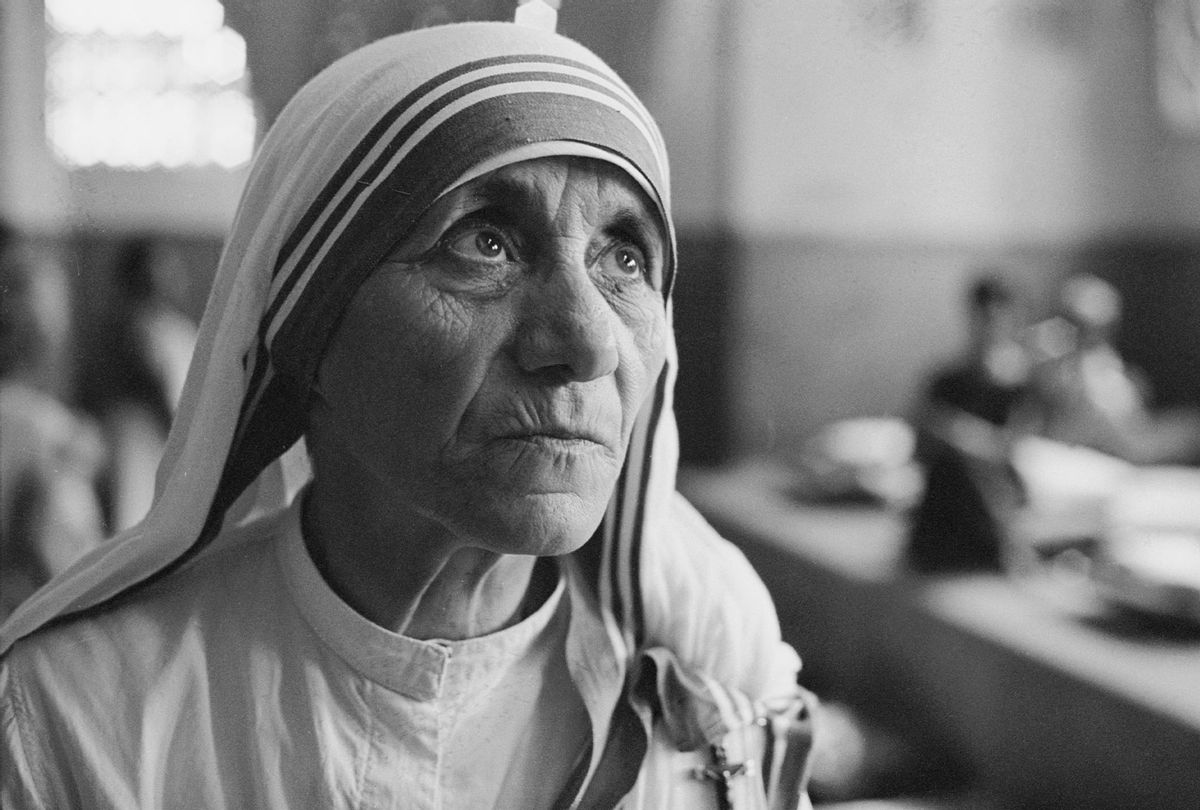 Albanian Roman Catholic nun and founder of the Missionaries of Charity, Mother Teresa (1910 - 1997) at a hospice for the destitute and dying in Kolkata (Calcutta), India, 1969. (Terry Fincher/Hulton Archive/Getty Images)
--

One of the most striking things about the new podcast "The Turning: The Sisters Who Left" is how some of the former nuns describe their experiences with life behind the walls of Mother Teresa's world-famous order, the Missionaries of Charity: in language reminiscent of the way we talk about cults.

They use terms like "isolation" and "brainwashing." They were only permitted to write home once a month and visit home once every decade. They describe what it feels like to look at a single human: as having a direct line to holiness.

Of course there were beautiful, spiritually affirming moments, too — times where these women felt achingly close to the God for whom they'd given up their normal lives — but for some, the suffering and separation were too much. "The whole idea was to make you feel as alone as possible," Kelli Dunham, a self-described "ex-nun," said.

It was enough to make some fantasize about escaping — and some did. Through "The Turning," a new 10-episode podcast by Rococo Punch and iHeartMedia, producer and host Erika Lantz tells their stories.

"I really am interested in stories that don't have a clear right and wrong," Lantz told Salon in an interview. "I think there's a lot of gray in the story. There are different sets of facts and, depending on what perspective you're using to look at them, you might have a very different opinion of what they mean."

Understanding their journeys starts with understanding the cultural power of Mother Teresa herself. Though she wasn't canonized as a saint until 16 years after her death in 1997, she was recognized as saintly by many in the Catholic church and beyond long before then due to her charitable work, especially after she was awarded the Nobel Peace Prize in 1979.

The order she founded in 1950, the Missionaries of Charity, ran soup kitchens and opened and staffed orphanages and schools for the underprivileged across the globe (though not without some controversy), and still manages homes for the terminally ill. Over the course of 71 years, thousands upon thousands of women took vows of chastity, poverty, obedience and "wholehearted free service to the poorest of the poor."

Because of that, Lantz said, Mother Teresa's name has become a "synonym for kindness."

"It's like the shorthand in our culture," she said. "When I started working on this project, I noticed that people would drop her name as a metaphor. Even in 'Tiger King,' and this isn't a direct quote, but you had someone introduce Carole Baskin as 'the Mother Teresa of Cats.'"

Many of the women with whom Lantz spoke, even if they had left the order, said that the reverence towards Mother Teresa was absolutely warranted. "She was so close to God and you knew it when she was there," one said.

But life within the order Mother Teresa had created was hard.

The sisters kept a rigid schedule that began at 4:30 a.m. and only included 30 minutes of unstructured recreation time, which was most often spent catching up on work that hadn't gotten done. Though they were required to go everywhere in pairs, the nuns were never allowed to have private conversations and would instead recite prayers together.

This was to encourage chastity, a virtue that, as Lantz found out in her reporting, Mother Teresa was strict about maintaining, almost to the point of paranoia. After all, the Missionaries of Charity were spiritually wed to Jesus and were organized to "satiate the thirst of Jesus Christ on the Cross for Love and Souls."

It's a telling detail that Mother Teresa was so intently focused on Christ's crucifixion. While, as Lantz put it in "The Turning," one would anticipate that the scriptural passages that would have most impacted Mother Teresa would have centered on Jesus' interactions with the poor, sick and hungry, she was perhaps most moved by how his pain catalyzed his holiness.

This was reflected in how the sisters lived in their respective convents, the series reports. Why would you pray from a chair when you could kneel on the hard ground? Why would you open the windows or wear one less layer when you could simply swelter? Why, as in the case of one nun, would you rest in bed after sustaining major burns when you could go back to work in almost unspeakable pain?

However, as Lantz found out, the emphasis on achieving holiness through suffering didn't stop there. As is revealed early in "The Turning," the sisters would frequently engage in self-flagellation.

Mary Johnson, a former nun and author of "An Unquenchable Thirst" — who also spoke with Salon back in 2013 about her experiences in the order — joined the Missionaries of Charity when she was 19 after seeing Mother Teresa on the cover of TIME Magazine.

She detailed her first self-flagellation session to Lantz, remembering how the bundle of cords she was given left her upper thighs streaked with red and white lines. In the bathroom stall next to her, there was another, more experienced nun doing the same thing.

This shocked Lantz, who said that the effects of that kind of trauma, even if self-inflicted, are lasting for many of the former sisters.

"I don't think anyone pictures Mother Teresa and imagines that her sisters are whipping themselves daily," she said. "I know Mary Johnson had told me, at one point, she asked her now-husband to beat her — he did not, I should say —because she craved a way to have relief from guilt."

As Johnson told Lantz, the extreme nature of the religious order is part of its appeal, but it also contributes to some of the "cultishness."

"It did surprise me that multiple sisters started using words like 'cult' or 'mind-control' or being 'brainwashed,'" Lantz said. "It doesn't necessarily mean those women thought they were in a cult, but it often felt like the closest thing they could compare it to. And it's interesting — often we think of cults as being on the fringes of society, but here we have the Catholic Church and Mother Teresa, who is so admired around the world."

"I think it's important to look at any institution with power with a critical eye and examine what role that power plays," she added. "When you have a strict vow of obedience, where the superior is a direct voice of God, you're creating a power dynamic."

Throughout "The Turning," Lantz examines how that power dynamic played out in other ways through abuses, betrayals and forbidden love. She also teases out, quite beautifully, a question that many will enter the series thinking: "Why didn't these women leave sooner?"

"It's hard because you believe that Jesus has been fervently calling you to this, it's what you must do," Lantz said. "Once you take that vow of obedience, that includes obeying God's will for you. Then Mother Teresa is also telling you that you've been called. It's hard to leave that. For some it's impossible."

The first two episodes of "The Turning: The Sisters Who Left" are now available. New episodes will be released weekly, wherever you get your podcasts.