Trump's DOJ went to war against the press: Seizure of CNN reporter's personal records is chilling

The big question in all this is why were they seeking these records in 2020? 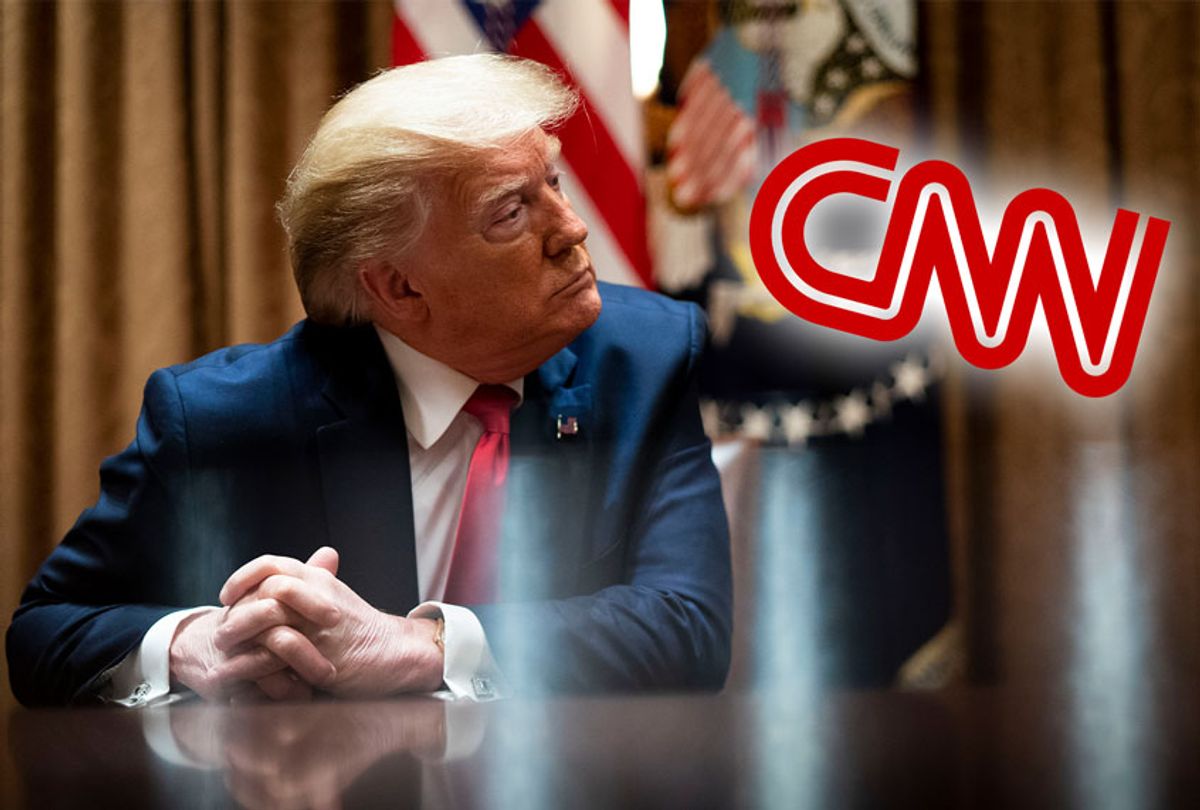 You may recall that in the wake of Former FBI Director James Comey's firing in May of 2017, we got the first real reporting that clearly illustrated Donald Trump's authoritarian impulses as president. It was revealed that Trump went way beyond simply asking the then FBI director to go easy on his buddy Michael Flynn, which was bad enough. In Comey's meticulously detailed memorialization of that famous meeting alone with the new president, he claimed Trump told him he wanted him to jail reporters for publishing classified information. Considering the context for that meeting, it's pretty clear that Trump was referring to journalists who had published the information about Flynn conversing with the Russian Ambassador to the U.S. during the transition and lying about it to the FBI. Turns out that was hardly the last time Trump instructed his henchmen to go after journalists and their source.

Trump, along with the right's media apparatus, kept up the drumbeat against leaks, tweeting furiously on the subject for months after that, finally turning his sites on then Attorney General Jeff Sessions, who was already in the doghouse for following rules that required him to recuse himself from the Russia investigation. Trump told the Wall Street Journal:

The Trump administration was the leakiest administration in history. From beginning to end, the people in Trump's orbit provided journalists with more copy than they could find time to publish. And according to many accounts, Trump was one of the top leakers himself, often ringing up his own favorite conduits on background. Yet he never stopped railing against leaks he felt were damaging and, as we know, his growing hostility towards the press became one of his most powerful organizing tools.

Sessions dutifully declared war on leakers and had the DOJ follow up on every referral — and there were many. He managed to put some leakers in jail including some who were tangentially involved in the Russia probe. But he never followed through on Trump's order to go after the press, at least not to his satisfaction, no doubt adding to Trump's loathing of him.

His successor Bill Barr, however, seems to have taken the task much more seriously.

Just in the last month, we've learned of some very serious encroachments on the First Amendment during Barr's tenure. I just wrote about the new reports of the nefarious abuse of the Justice Department to track down an anonymous Twitter user who mocked one of Trump's closest toadies in Congress, California Rep. Devin Nunes. And earlier this month we found out that in 2020, the Trump administration sought the 2017 communications records of three Washington Post journalists who had been covering the Trump Russia story and were responsible for the reporting on the Flynn-Kislyak calls. Most recently, CNN reported late Thursday that the DOJ informed the cable news network that last year federal prosecutors had also sought the records of CNN's longtime Pentagon reporter Barbara Starr.

One would assume that if Sessions had thought these records were necessary to track down leakers, he would have subpoenaed them at the time. The rules for a zealous attorney general signing off on such requests are not particularly onerous and Sessions' avowed mission to destroy the "culture of leaking" would have given him ample excuse to do it.

Basically, in order to at least attempt to abide by the First Amendment, the rules required that prosecutors use all other investigative methods before they take this step, that in most cases they alert the news organizations before they issue the subpoena, or in cases with national security concerns, they inform the individual journalists within 90 days of the subpoena being issued. And, of course, they have to deal with the various communications entities, phone companies, email platforms etc. many of which would have privacy concerns of their own.

These rules had been in place since the Clinton administration but after Sessions left, right wing journalist John Solomon reported that Deputy Attorney General Rod Rosenstein set about reworking them in order to make it easier for prosecutors to obtain journalists' records and discard the requirement that the DOJ alert a media organization that they are planning to issue a subpoena. He evidently didn't follow through on that. (It's unclear why but for some informed speculation suggesting there was pushback from Microsoft and the judiciary, read this from national security reporter Marcy Wheeler.)

The big question in all this is why were they seeking these records in 2020?

The DOJ didn't inform the media organizations or the reporters of their reasons but it seems logical to assume that it was part of Special Prosecutor John Durham's ongoing snipe hunt for the "origins of the Russia investigation." However, the fact that CNN's Starr, who did not cover the Russia investigation, was also subpoenaed suggests that this went way beyond Durham's mandate. If he is looking at leaks about North Korea policy he's way off track. CNN was not informed of when these subpoenas were issued so there is a chance that this happened during Sessions' tenure, but if that's the case, the DOJ completely abandoned the rules that required them to inform the subject within 90 days.

These revelations just keep dribbling out and they suggest that for all their bellowing about "the Deep State," the Trumpers sure took advantage of every lever of institutional, bureaucratic power to achieve their ends.

The current DOJ has apparently told these media organizations that they are willing to sit down and discuss what happened, but they are going to have to do better than that. The credibility of the Justice Department is so threadbare that they need to do a thorough investigation of everything that went on during the Trump era and they must then come clean to the American people. As Salon's Chauncey DeVega wrote a couple of weeks ago, we need a full audit of the whole government for the entire Trump term.

The fact is that the Obama administration was no prize in this department either and we all know what happened during the Bush years. The tension between the free press, the intelligence community and law enforcement will always be there. But in this age of disinformation and rampant propaganda, it has literally never been more important to have a free press than it is now. DOJ should be protecting it not treating it as the enemy.