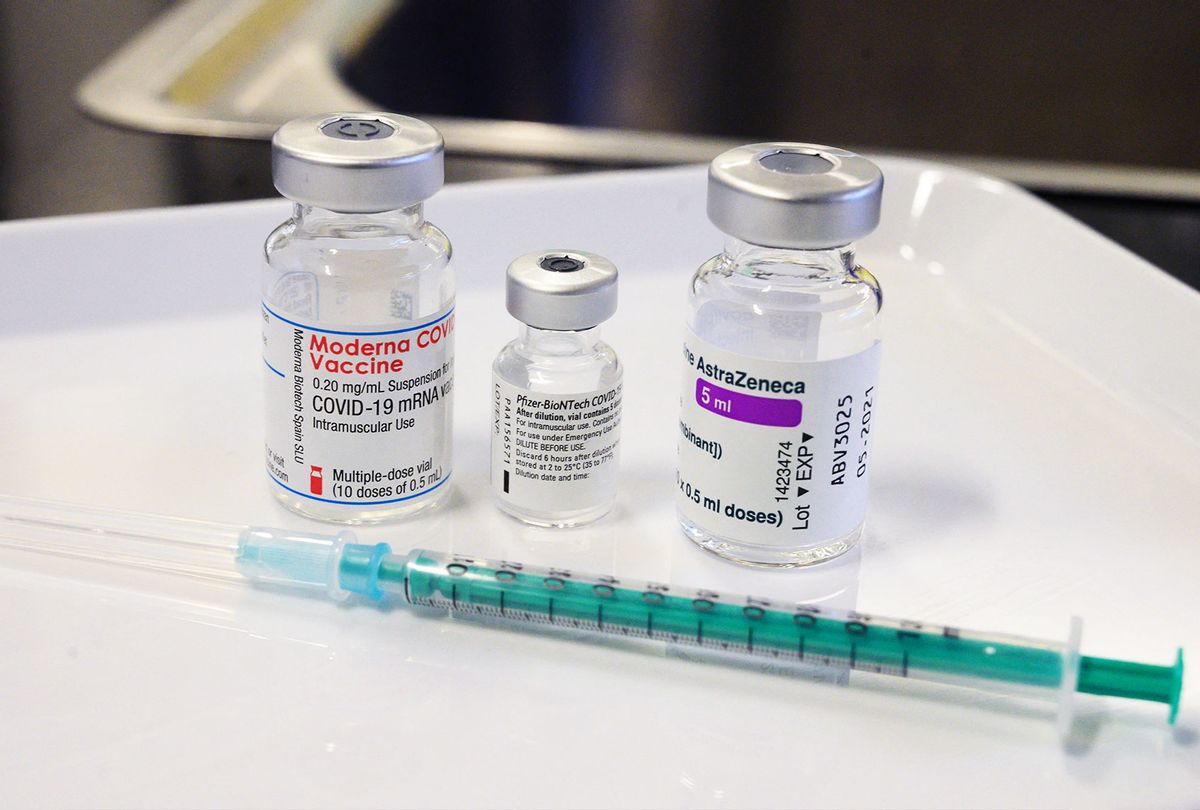 Three vials with different vaccines against Covid-19 by (L-R) Moderna, Pfizer-BioNTech and AstraZeneca stand on a table. (THOMAS KIENZLE/AFP via Getty Images)
--

In mid-April, the New York Post ran a story about a worried patient who suffered a vaccine mix-up. "Man accidentally gets one Moderna and one Pfizer COVID vaccine," the headline read.

Both the Moderna and the Pfizer coronavirus vaccines, which are being distributed in the United States, require two separate shots to be complete; the Moderna vaccine is delivered in two injections spaced 28 days apart, while for Pfizer, the difference is 21 days.

The patient involved in the mix-up, New Hampshire man Craig Richards, told his local news station that the experience made him "uneasy."

A supervisor at the site came over and assured Richards he would be okay and that he was fully vaccinated.

Now, new research reveals that Richards might actually be better than fully vaccinated. Indeed, scientists are learning more about mixing vaccine shots, and what they have found so far is encouraging.

Take, for instance, a recent study performed by a group of researchers in Spain led by that country's Carlos III Health Institute. It found that vaccinating patients with both the Pfizer–BioNTech and Oxford–AstraZeneca vaccines developed a strong immune response against SARS-CoV-2, the virus which causes COVID-19.

The news may help countries that have received varying quantities of each vaccine, where supply is limited. Likewise, it provides countries that have safety concerns about the Oxford-AstraZeneca vaccine with an alternative for patients who already used that medicine for their first shot.

Moreover, it is intriguing to note that the body's immune system may actually develop a stronger immune response with a mix-and-match approach to vaccines than if you simply get two doses of the same vaccine.

"It appears as if they're at least as good or better," Dr. William Haseltine, chair and president of the global health think tank Access Health International, told Salon. "You're presenting the immune system with something it has seen before, but in a slightly different version, and that can make a positive difference."

At the very least, it appears that someone who mixes vaccines does not have to be worried. As Haseltine noted, "almost everybody has received mixtures of vaccines over time, both for influenza and for many other diseases."

"There were really no potential risks of mixing and matching vaccines," Dr. Monica Gandhi, infectious disease doctor and professor of medicine at the University of California–San Francisco, wrote to Salon. "We do this all the time for other vaccines and don't even know the brand names of them at this point."

In fact, one of the main lessons from the new study is the very fact that it shows these two different types of vaccines can work when mixed.

"The most important takeaway is that a vaccination approach with an adenovirus-vectored vaccine followed by an mRNA vaccine is likely to be safe and immunogenic, but further evaluation is needed," Dr. William Moss, a professor at the Johns Hopkins School of Public Health and Medicine, wrote to Salon. Notably, the Johnson & Johnson vaccine is an adenovirus vaccine, whereas the Pfizer and Moderna vaccines are mRNA vaccines.

"Being able to use different vaccines for the first and second doses, and potentially for booster doses, is important because it allows for greater flexibility in vaccine schedules, particularly if there are shortages of one type of vaccine. And some combinations may be more immunogenic," Moss said.

Yet Moss and other scholars noted that this is very early research, and as such we should be cautious about celebrating its conclusions.

"We are identifying new ways to potentially make the vaccines more effective but only time will tell," Dr. Georges Benjamin, executive director of the American Public Health Association, told Salon by email. Medford echoed that thought, saying that we do not know for sure what to make of the effects of mixing different COVID-19 vaccines but that the "early reports of clinical studies in humans regarding reactogencity is very encouraging."

While there is not as much reason to be concerned about mixing vaccines, the same is not true for the millions of Americans who are only getting one shot of vaccines that need to be administer in two doses to be complete.

"It may result in an under-vaccinated population making it difficult to achieve herd immunity," Benjamin told Salon by email last month.

Salon reached out to the team behind the study for comment and has not heard as of the time of this writing.