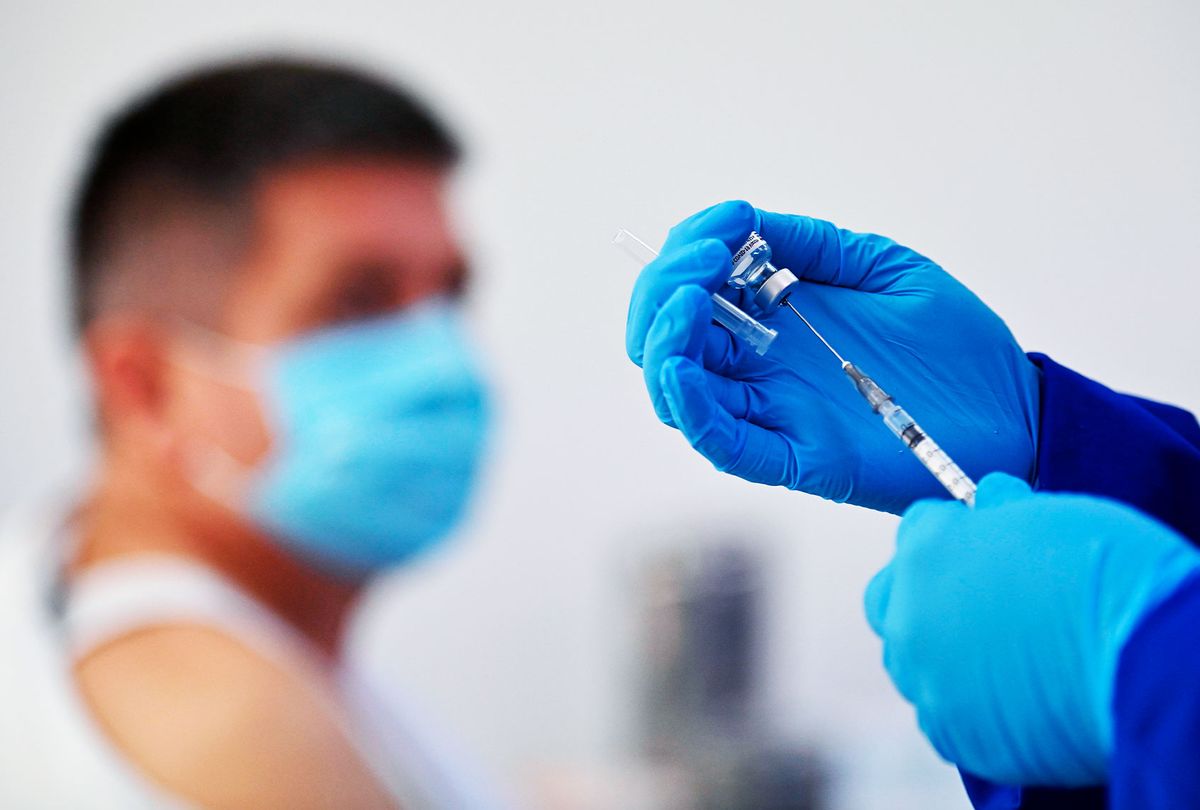 A health worker prepares a dose of the Pfizer-BioNTech vaccine against COVID-19 at the Versalles Clinic, in Cali, Colombia, amid the novel coronavirus pandemic on February 19, 2021. (LUIS ROBAYO/AFP via Getty Images)
--

As most of the public knows by now, the two mRNA vaccines produced by Pfizer and Moderna to protect against COVID-19 require two shots to function. Sure, one shot is helpful, to be sure; but like a puzzle with two pieces, the vaccination isn't technically "done" until both inoculations are complete.

That is why experts are concerned about a recent report by the Centers for Disease Control and Prevention (CDC) that reveals that millions of Americans never returned for that second jab. (The beleaguered Johnson & Johnson vaccine only requires a single shot.) The CDC's data reveals that almost eight percent of the people who received one Moderna or Pfizer shot — roughly five million people and counting — did not get a second dose.

The reasons for second-shot absenteeism vary: some facilities that give out the shots simply ran out of supplies. Others had the wrong vaccines on hand. In some cases, patients mistakenly believed one shot would keep them safe. In other cases, some were wary after experiencing side effects from their initial jab, according to interviews conducted by The New York Times.

Dr. Grace Charles works as a senior research scientist at a privately funded action tank called Surgo Ventures, which has released surveys on possible issues persuading people to get vaccinated. Charles said that Surgo's research suggests three possible reasons for the non-completion rate. Some are logistical: Charles points out that their survey found 30 percent of patients could not find an appointment, 13 percent said phone lines or websites crashed, 12 percent did not know how to schedule their appointment, eight percent said they did not live near a clinic, five percent said they did not have time and four percent were struggling to travel to get a vaccine.

Dr. Charles added that there also may be issues with the quality of the data on second vaccinations, since some people may receive their second dose at a different location than the first one. That has the unintentional side effect of inflating the numbers of those who only get one shot.

Then there are the psychological reasons, revealed by Surgo Ventures' survey from early January.

"From that survey, our psychobehavioral data enabled us to come up with five distinct segments of Americans based on their intention to get the vaccine—The Enthusiasts, the Watchful, the Cost-Anxious, The System Distrusters, and the Conspiracy Believers," Charles explained. "People in each segment share similar beliefs and concerns about COVID-19 vaccination, rather than being similar primarily in their demographics." (The numbers within each group shifted between January and March.)

Charles noted that at least 70 percent of the American population needs to be vaccinated for herd immunity to be possible. Yet Surgo's March survey found that 33 percent of the population will hold out on getting a vaccine until at least July. This means that vaccine hesitancy is, in itself, a big problem and provides a larger context for the issue of people who get inadequately vaccinated.

While the Enthusiasts are on board with vaccination and it will be extremely difficult to sway the Conspiracy Believers, the other three groups are known as the "Persuadable." These include people who are "watchful" and simply want to see what happens to other people they know who get vaccinated before receiving vaccines themselves; the "cost-anxious," who are concerned about how much time and money they'll need to invest in getting vaccinated; and the "system distrusters" are predominantly (but not entirely) people from communities of color who believe the health system does not treat them fairly.

Dr. Irwin Redlener, leader of Columbia University's Pandemic Response Initiative, offered another explanation for why people may be vaccine hesitant.

"There are many reasons why there has been a measurable slow-down in people getting the 'second shot' of a two-shot series," Redlener told Salon by email. "People have heard a great deal about potentially very good immune response to the first shot alone — even without evidence establishing long-term durability of a single dose. And we've heard about the U.K's good success in tamping down coronavirus spread even with a very long delay in administering the second mRNA dose."

He added, "Then there are the more mundane realities. It's often difficult to schedule the second dose, take off from work, get child care and so on. So if you're reading on social media that one dose may be just fine, that's enough to allow many people to feel fine just getting the first dose only." He added that recent reports about blood clots caused in rare cases by the Johnson & Johnson vaccine likely exacerbated reluctance.

Make no mistake about it: There is a real threat to public health posed by people who only get one of their two vaccine shots.

"It may result in an under-vaccinated population making it difficult to achieve herd immunity," Dr. Georges Benjamin, executive director of the American Public Health Association, told Salon by email. "However, we still have a lot to learn about how protective one shot really is."

Dr. Paul Offit, Director of the Vaccine Education Center and an attending physician in the Division of Infectious Diseases at Children's Hospital of Philadelphia, emphasized to Salon that "people really need to understand that this is a two-dose vaccine and that by choosing not to get the second dose, what they are doing is selecting for shorter term immunity and poor immunity against these variants."

He advocated "education for those who are making this choice. If you are skeptical and concerned, then presenting information should help. Reason and logic should help. I think that what we should do is create educational materials to try and influence people to receive the second dose."

Benjamin expressed a similar view, explaining that "we need better patient education about the need for two shots and find out what the barriers are. Once we have a better idea of the barriers we should be able to address them for many people." He added that one benefit of the Johnson & Johnson vaccine is that it is "one and done."

Dr. Monica Gandhi, infectious disease doctor and professor of medicine at the University of California — San Francisco, struck a note of cautious optimism.

"Luckily a whopping 92 percent of Americans returned for their second dose so I doubt this will become much of a problem," Gandhi wrote to Salon. "We are already seeing the turn-around happening in cases in the country due to vaccines and so cases will keep on getting lower and lower with time, making your risk of infection even lower even with one dose."

She added, though, that "people between the first and second shots can definitely get infected, especially in places with high case rates, so we should encourage everyone to get their second shot."