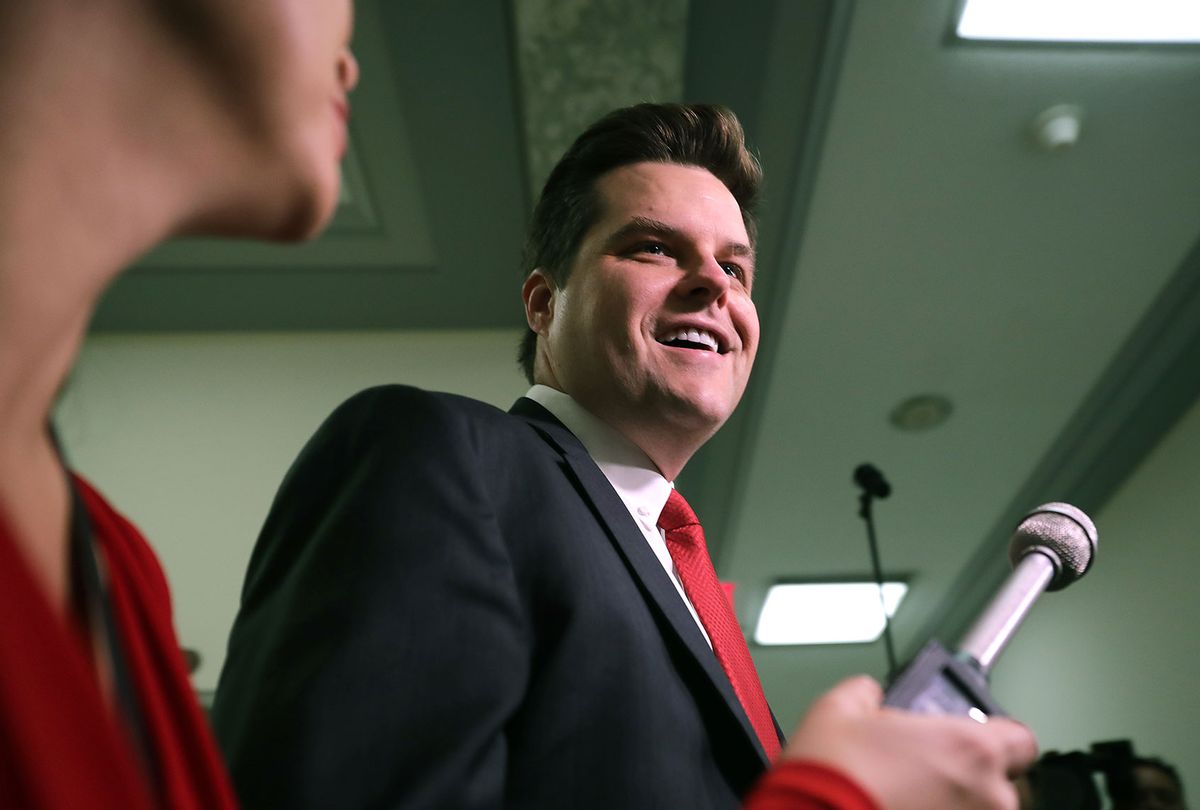 Rep. Matt Gaetz, R-Fla., the embattled conservative firebrand who is the subject of a thus-far-inconclusive Justice Department investigation into an alleged pattern of sexual misconduct that may include statutory rape, says he's eyeing a presidential bid in 2024 — but only if Donald Trump decides not to run.

"I support Donald Trump for president. I've directly encouraged him to run and he gives me every indication he will," Gaetz wrote in a Thursday text message to the New York Post. "If Trump doesn't run, I'm sure I could defeat whatever remains of Joe Biden by 2024."

Gaetz echoed that message on Thursday to Steve Bannon, Trump's former campaign "CEO" and White House chief strategist. "I'm for Donald Trump in 2024. This is Donald Trump's party and I'm a Donald Trump Republican," Gaetz declared. "But if for whatever reason President Trump decided to enjoy the swamps of Florida a little more than the swamps of Washington, D.C., I'm certain I could whoop Joe Biden up one side of the country and down the other. Because the people in America want passion and excitement and inspiration in the executive."

Last week, Gaetz friend and associate Joel Greenberg, a Florida tax collector, pleaded guilty to knowingly soliciting and having sex with an underage girl. Greenberg has alleged that Gaetz paid for sex with multiple women as well as a 17-year-old girl, according to a letter obtained by The Daily Beast. Recently, Gaetz's former girlfriend was said to be cooperating with investigators, though the Florida lawmaker has not been charged with a crime.

Amid the investigation, Gaetz has launched his "America First" speaking tour alongside freshman Rep. Marjorie Taylor Greene, R-Ga., who has come under recent scrutiny from both sides for comparing the House's mask mandate to the Holocaust. One prospect that appears to be tormenting many liberals on Twitter is that their joint tour could lay the groundwork for potentially nightmarish joint campaign.

Last week, during a speaking engagement in Arizona, Gaetz presented his political worldview, borrowing considerable verbiage from the Trump lexicon.

"Thousands of miles away in the swamp of Washington, they kind of hope that this was all over, that our populist little revolt would run away and no longer be a part of our national identity," Gaetz said. "Oh, we are just starting."

He continued: "It's been too many years since an inspirational President Ronald Reagan told us that it was 'morning in America again.' Too often now it seems like it's twilight for Joe Biden. If it was morning in America under Reagan, it sort of seems like naptime in America when Joe Biden is the president. I think it's about time to wake up our fellow countrymen."

An unnamed source told the Post that Gaetz may be considering a presidential campaign as a tactical maneuver designed to benefit his Republican ally, Florida Gov. Ron DeSantis, who is also said to be mulling a 2024 bid. DeSantis "might like someone else on the debate stage who can torch his opponents and lay down ground cover for him," the source claimed, adding that Gaetz has "clearly been vetted and smeared like a presidential candidate."

It remains to be seen whether Gaetz's political career will be ended or severely damaged by the continuing investigation into his alleged sex crimes. As the congressman is no doubt aware, multiple accusations of sexual assault did not prevent Donald Trump from winning the presidency in 2016.