"We Are Lady Parts," a fierce new comedy about a Muslim punk band, rocks our world

In this addictive new series, a punk group shreds on songs like "Voldemort's Alive & He's Under My Headscarf" 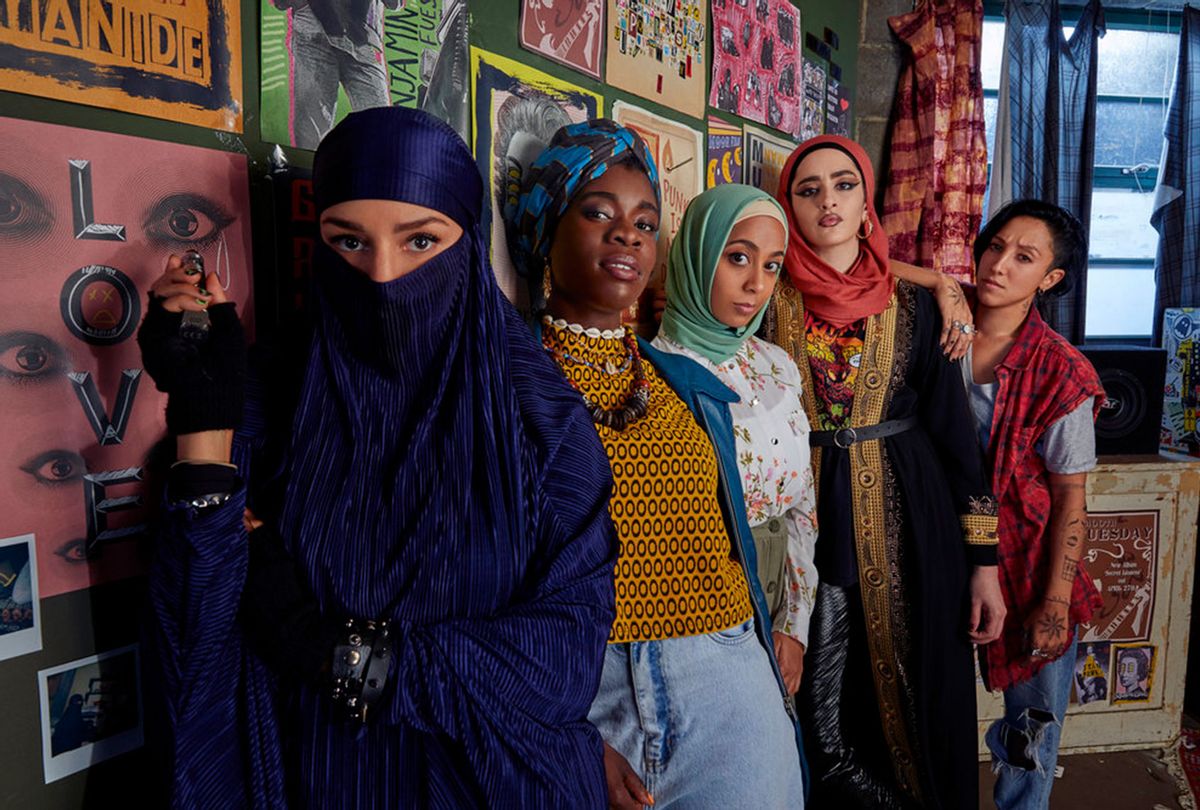 Call it luck or call it kismet, but Peacock's debuting "We Are Lady Parts" in close proximity to kiddie punk band The Linda Lindas achieving viral exposure with their hit "Racist Sexist Boy" is a beautiful thing. In The Linda Lindas we have an L.A.-based group enjoying the kind of mass appeal punk usually doesn't, save for a group like Green Day.

Like so many other purveyors of fast 'n' loud tunes, that band consists of a bunch of white dudes while The Linda Lindas are Asian and Latinx girls between the ages of 10 and 16 who write their own songs, whose singles slap hard and – as we saw in the film "Moxie" – can rip the hell out of a Bikini Kill cover. Someday the quartet may also inspire a Broadway musical; who knows? For the time being they're winning the all-important battle of having their greatness be noticed and appreciated.

There's nothing quite like Lady Parts either, a fictional five-woman punk band whose members are Muslim and whose manifesto, written by lead singer and guitarist Saira (Sarah Kameela Impey) is "We're sisters who pray together, play together, speaking our truth to whoever can be asked to listen."

Roaring alongside her are the band's drummer Ayesha (Juliette Motamed) and the endlessly positive Bisha (Faith Omole), with manager Momtaz (Lucie Shorthouse) hustling on their behalf and flaunting her niqab like armor.

These are highly charismatic weavers of distortion and raw power, singing out their frustrations and glorying in their outsider status which such tongue-in-cheek ditties as "Voldemort's Alive, And He's Under My Headscarf."

Nida Manzoor wrote and directed this British import's six episodes on top of co-writing all of Lady Parts' catchy-as-hell tunes with her sister, brother and brother-in-law. It joins the excellent "Girls5eva" on Peacock, but aside from both being about the music industry the two series couldn't differ more. Frankly this show hooked me more quickly and entirely.

Manzoor taps into a love for rock mythology and its power to bind people to music with profound reverence. Even that is outdone by the affection with which she's written these women.

Any show like this invites the temptation to forefront its inclusive storytelling and casting. That aspect of "We Are Lady Parts" is clear and, given the dearth of shows starring and about Muslims, let alone hijab-wearing women shredding punk music with absolute tenacity, it is noteworthy.

But it's the joy with which Manzoor designs "We Are Lady Parts" that grabs you by the shoulders and makes you appreciate its wildness, same as any other rock legend committed to film or TV. Song lyrics get into your head, like the line "broken by the empire, raised by MTV" from "Fish and Chips," or the tune spun from a rant about a jilted crush Amina calls "Bashir with the good beard."

Struggle is universal, and the rock version of it can be crushing or hilarious. Following the standard band origin story's rise-fall-rise-to-the-start structure also helps in that we have a notion of where this journey is going to take us.

Usually a bunch of skinny white guys are the heroes of this tale, but through Lady Parts we see how the making of a band transforms when its artists are shaking off pressures placed on them by culture and society.  Getting onstage comes with additional risks for marginalized women, but that's emphasized less than punk defiance of them flexing who they are and all they can do. This band doesn't exist in reaction to an exclusive, primarily white rock scene but for the sake of staking their own claim and singing songs for themselves and people who get them.

A key success indicator in a show like this is whether you believe these actors are actually playing the music. Everyone in Lady Parts has some musical ability. Anjana Vasan, who plays the band's newest member Amina Hussain, is an acoustic guitar player who released a blues EP. Impey's performance may be the most significant stretch, and perhaps that's because of how she's written. Impey didn't play guitar before taking on this role, but she vibrates with the kind of kinetic fury that is this music's essence, slicing into her guitar licks with same grudgeful brio she reserves for her day job as a halal butcher.

Mainly and importantly, you'll laugh along with Lady Parts as much as you relate to them. Manzoor makes Saira the earnest heart of the band, spreading the comedy among everyone else, but she never forgets that this music is about unfettered joy. Ayesha has some phenomenal material as a ride share driver who deals with nitwits by blasting them out of her car with death metal. Bisha, meanwhile, tries to sell a comic book series called "The Killing Period" about women who become homicidal during their monthly cycle. (It is not a bestseller.)

But the show's primary comic relief comes courtesy of Amina and her affable, supportive parents. Amina is a microbiology PhD student who hides her divine guitar talent in her closet. Really. Her wardrobe's doors are a tribute to singer-songwriters like Don McLean, something she dares not show to her peers. Her closest friend is getting married and eager to get Amina engaged, but her academic ambitions and love of music don't make her an easy match.

Amina's road eventually, reluctantly, leads to Lady Parts once Saira decides the band needs additional guitar muscle. Her wizard-level skills aren't enough to score the band a gig, though. Once they do that, there's the sizable problem of Amina's biohazardous stage fright to deal with. She doesn't just vomit when she gets nervous. There's a real concern with, as she puts it, what happens "if poo comes." Vasan's halting, mousy demeanor complements the rest of the band's swagger, and watching her release her inhibitions through her guitar strings is a show all its own.

Manzoor writes Amina as the narrator of "We Are Lady Parts," and Vasan inflates her character's nerdiness with a jaunty vigor that makes the show, especially once she befriends the comparatively feral Saira, the person who sees everything Amina is hiding and aches for her to show it off to the world. Manzoor uses Amina's quietude as a cover for a fantastical interiority. In one moment mooning over a crush detours into a scene inspired by "Casablanca." Later a terrible date tumbles into a humiliating game show. But her mom and dad remain gentle, amusing gems through it all. Fall in love with Lady Parts all you want but by the finale you may wish you had Amina's parents.

That evenness of portraiture makes "We Are Lady Parts" an anthem for taking up space in places where nobody expects you to be, and you may not even feel invited. Punk itself occupies that role in culture, to the extent that when an influencer characterizes the band's sound as "a raucous frenzy of unskilled guitar music" it should (and does) come off like an insult.

Nobody who watches The Linda Lindas would dare say that of them. And no one could possibly render that verdict after witnessing Lady Parts spike up Dolly Parton or Queen, especially once Amina catches its spirit.

Anyway, she provides a better description of how this music at its best makes a person feel. "It's like Godzilla after she destroys a city, I mean, I think, after she destroys a city . . . really calm, how mindful she must feel," she blurts, adding, "I don't want to puke anymore, OK? I just want to play." You'll want that for her too, acutely enough to hope that this season receives several encores.

"We Are Lady Parts" premieres Thursday, June 3 on Peacock.